When the saints go up for auction

A one-man crusade against online relic sales is met with unholy indifference. 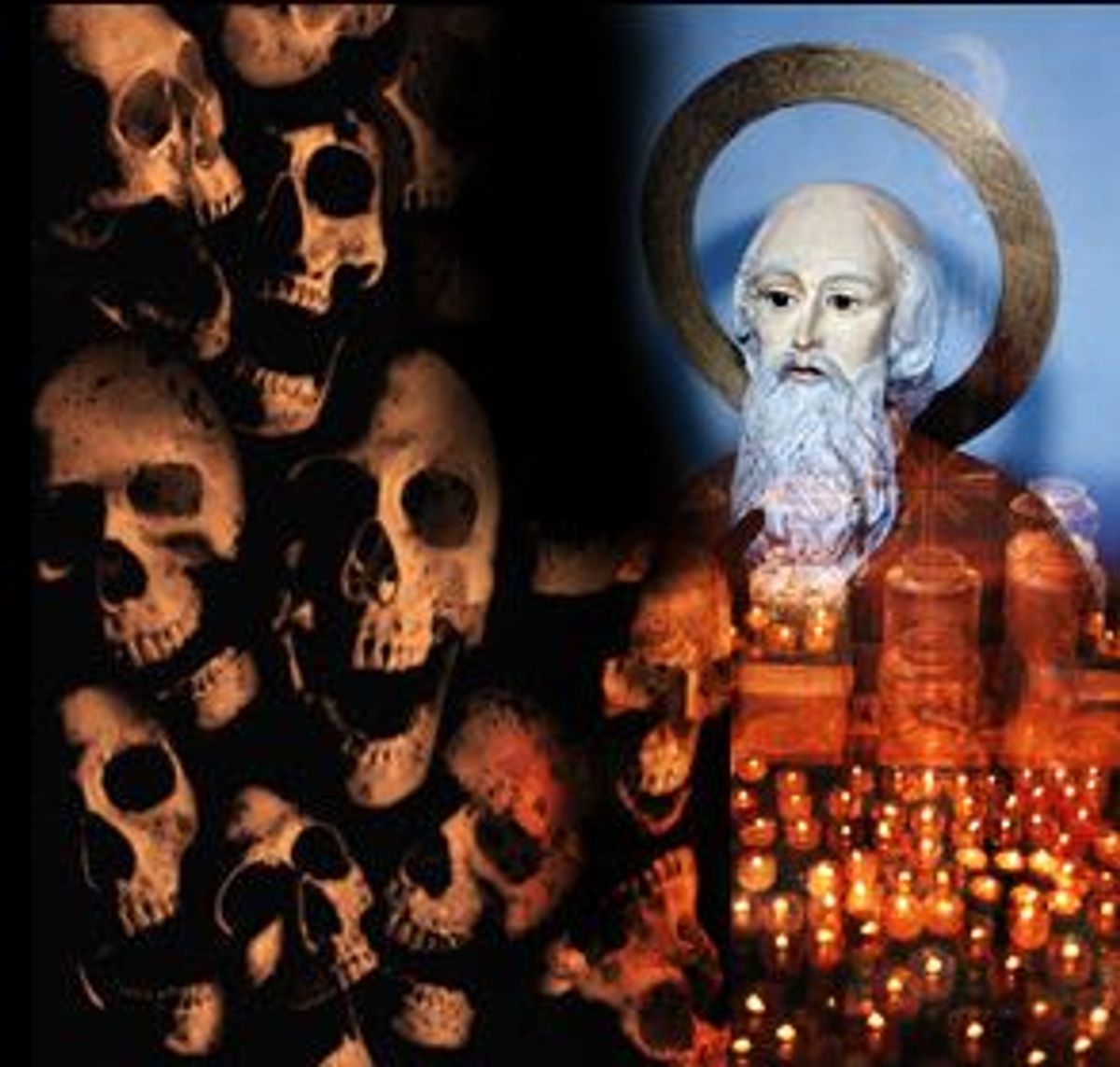 There's a story Thomas Serafin enjoys: During the Middle Ages, a traveling monk hoping to purchase a saint's relic for his monastery found little success and returned home disappointed. Luckily, he soon encountered a merchant who offered to sell him the skull of John the Baptist. The monk was dumbfounded. Hadn't he just seen the skull of St. John in a church during a recent visit to France? "That was the skull of St. John when he was a child," explained the merchant. "This is his skull when he was an adult."

To Serafin, a professional photographer and founder of the International Crusade for Holy Relics in Los Angeles, this little parable is a reminder that some things never change. Aided by some 200 members -- primarily Roman Catholics but also members of the Russian Orthodox, Byzantine and Anglican churches -- Serafin is on a mission to identify sellers of saints' relics and convince them of the error of their ways, or shut them down. But he's not roaming the lonely cloisters or muddy market squares of Europe; instead Serafin keeps a suspicious eye on the Internet's highly successful auction houses, which have revived the market for the earthly remains of saints -- and sparked a conflict between an ancient religious tradition and the free-market ideals of the Internet.

Relics challenge our sensibilities in a skeptical age, but the modern world hardly lacks grotesque secular equivalents: Think of screaming fans flailing to catch Elvis Presley's sweat-drenched hankie or Michael Jackson coveting the bones of the Elephant Man. Saints' relics occupy a decidedly more solemn tradition: They're venerated as reminders of Christian virtue, and miracles are believed to occur in their presence. First-class relics -- pieces of a saint's bone or flesh -- are the most sacred. Second-class relics -- objects a holy person wore or owned -- are also highly valued. (Items that have touched other relics are known as third-class relics and can be found in many church gift shops.)

Although relic veneration is as old as Christianity, abuse and fraud connected with relics peaked during the Middle Ages, prompting Chaucer to make his most memorably despicable "Canterbury Tales" character a corrupt preacher who hawks pigs' bones to gullible peasants. Later, an abiding interest in relics starkly separated Catholics from Protestants, and John Calvin railed venomously against them as evidence of corruption. In the 16th century, dozens of nails were said to be relics of Christ's crucifixion, more bones of Peter and Paul existed than either saint ever could have packed into his body and John the Baptist kept rearing his many problematic heads.

The modern canon law of the Roman Catholic Church strictly forbids the sale of first-class relics. But even though the law was reaffirmed as recently as 1983, relics still aren't the most popular subject among modern Catholics; to some clergy, they're unpleasant reminders of medieval superstitions and stereotypes. "I don't know anything at all about relics," sniffed one priest and canon lawyer in Washington. "I don't know anyone around here who would, either." In a modern church grappling with pressing social issues, it's even more rare to find anyone willing to blow the cobwebs of archaism off the concept of simony -- the sin of selling spiritual items and religious offices, named for New Testament heretic Simon Magus.

But electronic simony is on the rise; just ask Serafin, who sells his luridly titled report on the subject, "nEw JUDA$: Electronic Simony Exposed," on the ICHR Web site. The report documents the organization's clashes with some of the online auction community's inveterate relic dealers. Like most Internet-based correspondence, the e-mail ranges from righteous and determined to petulant and crude. One grumpy relic seller mocks Serafin's knightly title "Chevalier," bestowed by the relic-friendly royalty of Portugal, as "French for the posterior of a horse." Others accuse the ICHR of entirely unwholesome motives. "Since you're so busy exploring the 'bad sins' of others," writes a relic dealer in response to an ICHR scolding, "just between you and me, buddy, what's YOUR 'bad sin'??? With most right-wing nut cases like you I've met, it's usually something NASTY that has to do with the 6th or 9th commandments. See you at Confession. You poor, sick thing."

But Serafin has a little fun with his adversaries, too. In the documents he releases, he mischievously replaces his foes' names with "SIMON," a cheeky jab with damning connotations. Some of the e-mails reproduced in "nEw JUDA$" even bear witness to the justifications of relic-selling clergy: One nun -- Serafin dubs her "SIMONITA" -- accurately points out that the Roman Catholic Church allows the sale of relics as long as it's clear that the container is for sale and the relic is a "gift." "It's a fine and Jesuitical quibble," she writes, "but if it's good enough for the Church, it's good enough for me!"

The ICHR has clearly dealt with a few sleazy hucksters. Last September, one of its most unrepentant opponents tried to sell "the air breathed by Jesus" on eBay. Serafin and his members were aghast, but the audacious auction was an obvious attempt to get a few cheap yuks and horrify ICHR's serious-minded crusaders. But not all online relic sellers resemble some slick Chaucerian caricature. Many are like the devout Catholic woman from China who simply wanted to get rid of a relic, unaware that her religion forbade its sale. "She thought owning it was 'spooky,'" Serafin explains.

Others consider themselves religious and confidently assert their own interpretations of right and wrong. "I am a Catholic, but I do not blindly follow their dogmas," says Daniel Lopez Gonzalez of Puerto Rico, who recently sold "an old relic of the True Cross" on eBay for $1,100. Gonzalez says that he buys far more relics for his own personal veneration than he ever sells, arguing that there's little difference between buying a relic from him and obtaining one legitimately from a religious order in exchange for a donation. "Whichever way you want to say it," he says, "a donation or contribution to the church -- any amount of money given in exchange for a relic -- is a sale."

"I have never sold a relic, just the reliquary," explains another dealer carefully. "The relic is always a gift." He points out that organizations like the ICHR are not officially sanctioned by the Catholic Church, and calls them "a bunch of renegades that just want to acquire relics for free."

Serafin and the ICHR "rescue" many relics by buying them, which isn't prohibited under church law. But their other options are severely limited. Whether laws pertaining to the sale of human remains apply to tiny chips of bone and flesh is still an open question, and legal remedies for relic theft are nearly nonexistent. In 1998, a Romanian thief who swiped a relic and other religious items from a French church was nabbed in Newark, N.J., and charged with a decidedly mundane crime: filing a false customs report. Fraud laws may cover the problem of fake relics -- but with deep and abiding faith riding on the answer, what prosecutor or judge would dare confirm or deny the authenticity of saints' bones, or of a chip of wood supposedly from the manger of the infant Jesus?

At times, Serafin and the ICHR have persuaded online auction houses to close down some sales of first-class relics. Serafin has kind words for the staff of Amazon Auctions, where, he says, some staffers have even learned to recognize Latin phrases like ex ossibus, "from the bones of." "We don't have a policy that specifically prohibits the sale of first-class relics," explains Amazon Auctions spokeswoman Lizzie Allen, "but in the past we have removed relics that were reported to us. Also, human body parts are prohibited, therefore first-class relics will be prohibited in most cases."

Members of ICHR have also discussed the matter with lawyers for eBay. Although there's never a guarantee that a relic will be removed, "we do take it on a case-by-case basis," says eBay spokesman Kevin Pursglove. "If a user brings a complaint to our attention and we can determine that a relic includes human remains, it may be removed." But as of early February, eBay was still a veritable online charnel house of holy bones -- from well-known figures like St. Valentine to the more obscure St. Alphonsus Liguori. "Getting eBay to do anything is impossible," complains a frustrated Serafin.

Ronald Green, director of the Institute for the Study of Applied and Professional Ethics at Dartmouth College, suggests that a viable business can only do so much to assuage the concerns of its religious customers: "At issue here, of course, is basic freedom of commerce and the rights of individuals to sell items whose sale others religiously object to. Surely we don't want to cater to every religious objection to the sale of things. Should we forbid the sale of meat because Jains object to the killing of animals? Alcohol because some groups oppose its use?" But Green concedes that online auction houses don't want to become the object of a Catholic boycott, and should be willing to work with offended religious customers if enough complaints suggest a serious problem.

It's unlikely that Catholics will unite in their outrage over relic selling anytime soon. The archdioceses of Washington and Los Angeles did not respond to calls about online relic sales, and it took a call to the Vatican to find a church official who would discuss the subject. Monsignor Robert Sarno of the Congregation for the Causes of Saints, the Vatican office that gathers evidence for canonizations and works to preserve relics, was appalled to learn that simple containers with small relics were selling on eBay for hundreds of dollars. "I'm disappointed that businesses would have such high disregard for people's religion by selling relics of deceased individuals proclaimed to be in heaven," he said from his office in Rome. "These are sacred objects." Sarno suggests that the Catholic Church's official involvement might only make the problem worse, and he commends the laypeople who are waging an unpopular crusade. But he concludes with a sigh: "I guess most people don't care."

Anecdotal evidence suggests that an indifferent clergy may be pumping both supply and demand for relics. Michael, an art dealer from Germany who sells relics online, says he knows of a cardinal who regularly browses antiques shops to stock his personal collection. Other relic sellers on both sides of the Atlantic report tales of cash-strapped monks and nuns whose vows of poverty don't prevent them from dropping by pawnshops to make a few quick bucks. Serafin himself says he was even heckled by a nun during a recent speaking engagement. "When a nun calls you a cyber-Nazi, you know you're doing some good," he says, suggesting that his critics aren't seeing the larger picture.

"Listen," he says earnestly, "if we put the relics back in the box, we still have the lives of the saints -- reminders of how these people preserved their virtue, how they persevered." A relic, he explains, isn't just a dead piece of bone or flesh, but a reminder of the link between heaven and earth. "I think that's something most people can understand."

Interest in the saints themselves doesn't appear to be waning. In 1999, the relics of St. Thérèse of Lisieux, a French nun who died in 1897, attracted crowds in the tens of thousands when they were displayed in American churches and shrines. And Pope John Paul II may soon make St. Isidore of Seville, a seventh century archbishop who compiled an early encyclopedia, the patron saint of the Internet.

Although the actual remains of saints are an unpopular subject, Serafin allows himself an optimistic laugh, remembering what a sympathetic priest recently told him. "If I can hang on around 300 years," he says, with no doubt in his voice, "they'll be back in fashion."