Why Eminem should get the Grammy

His "Marshall Mathers LP" is the most deserving Grammy nominee in years. Too bad no one gets it. 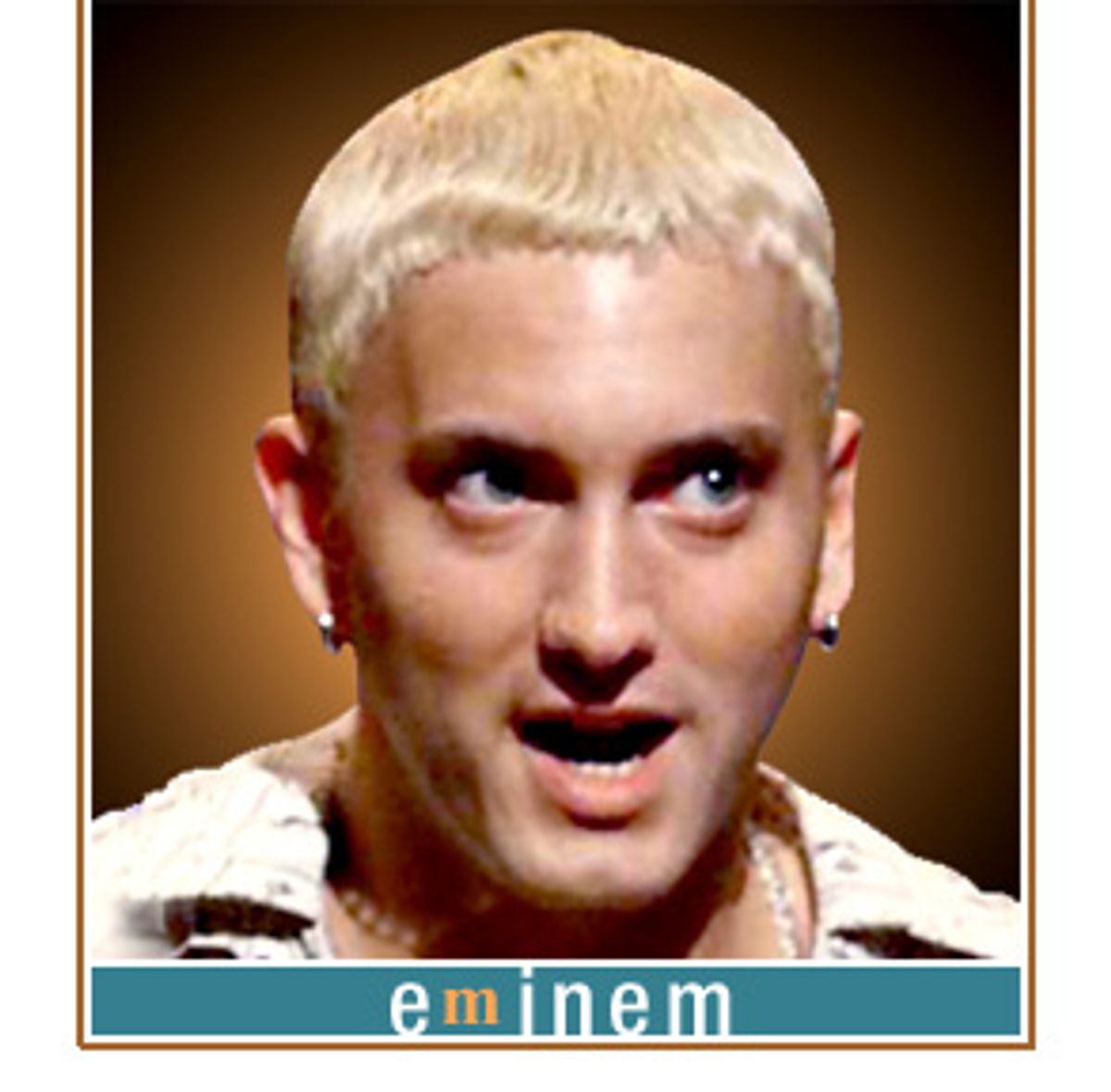 Eminem's Grammy-nominated album, "The Marshall Mathers LP," clocks in at 75 minutes. That's almost as much music as you can fit on a single CD. With his "Songs in the Key of ADD" style, it's a lot of words.

Yet the Detroit rapper has spawned a dialogue that dwarfs the album, in size and occasionally in vitriol. And for all the trees that have been sacrified for the sake of the critical battle that has raged as the Grammys approach, neither his defenders nor his detractors have produced much that history will remember.

Instead, Eminem has received the most banal, reactionary responses. Hipper-than-thou music critics mostly like him, but they miss the point. And the feel-good (or at least feel-self-righteous) posturing from gay advocacy groups like GLAAD and Lynne Cheney is even worse. What both groups are unwilling to say is that "The Marshall Mathers LP" is a searing, complex, whirling, grotesque work, and the most deserving Grammy nominee in years.

The chances of Eminem actually getting the record of the year award are roughly nil. (It's doubtful he would have been nominated were it not for new rules that allow a sort of super-committee to override the members' embarrassing nomination omissions.) The work is far too extreme for the National Academy of Recording Arts and Sciences. To vote on the Grammys you have to be a professional record-maker in some capacity -- and a member of NARAS. Despite some outreach campaigns in recent years and occasional, almost accidental recognition of an important artist or two, the group is still overly influenced by the old-school worlds of classical and bland pop.

The music critics are almost uniformly right: This is a great work, and Marshall Mathers/Eminem/Slim Shady is a huge talent. Dr. Dre's production is typically adamantine -- beats and vocals hit hard. Eminem's irresistible hooks and chants stick in your head. And the rapper's sheer verbal power marks every song with off-kilter rhymes, in-jokes, contradictions and insults.

Unfortunately, they've been right for all the wrong reasons. Most of the early reviews called the record a "guilty pleasure," or pointed out particularly sharp references or jokes. One Eminem slam, directed at Christina Aguilera and Carson Daly of MTV's "Total Request Live," was reported nearly everywhere.

The rest of the time, the critics have tried to explain away the most obvious parts of the record: its misogyny and its homophobia. Take this, from Dimitry Leger in last week's Village Voice annual Pazz & Jop Critic's Poll, which called "The Marshall Mathers LP" the fourth-best record of the year:

"Eminem didn't hate more fags or promise to kill more bitches on his latest album than the average credible gangsta rapper does per verse. Critics who fail to hold black rappers to the same moral standard will henceforth appear to be on some very uncool and outdated shit."

The most irritating rock-crit tendency -- the desire to appear risky even though you're 27 and have an M.A. from Brown -- was replayed in almost every review. Worse, the tone of these reviews was almost always halting, begrudging, guilty or pained.

And sometimes, the criticisms were painful themselves. At what might have been the lowest point of the yearlong Eminem controversy, Michael Greene, president of NARAS, wrote a dense, blockheaded defense of the album's status as "the voice of rebellion."

This is odd. "The Marshall Mathers LP" is not a pleasant listen. The music is little more than a mnemonic device, its halting, spare beat the perfect complement to the rapper's irritating persona. He's the high school classmate from hell. To use that oft-repeated verse, Eminem resorted to attacking lite pop music with "shit, Christina better switch me chairs/So I can sit next to Carson Daly and Fred Durst/and listen to 'em argue over which one she gave head to first." Any hip-hop fan would recognize that the line is not particularly offensive, particularly trenchant or particularly funny.

When the album is not being tragic and scary, as in "Kim," the song where Eminem imagines killing his ex-wife (again) and "Stan," where he talks to an obsessive fanboy, it's just being dumb. Eminem admits as much, in "The Real Slim Shady," the album's most popular song:

Well, maybe you don't. But maybe you did. Or you know, or live with, or were raised with or went to school with someone whose idea of humor is:

Maybe there is a little Slim Shady in all of us. I know there is in me, and I suspect there is in you.

I live in a rural county outside Roanoke, Va., the "Star City of the South." My grandmother's house, in nearby Lynchburg, is a five-minute walk from Jerry Falwell's. This is the region where Appalachia borders on the South, and Roanoke is significant for being the cultural and financial center of a famously poor, backward region. As a reasonably wealthy railroad town between historically downtrodden cultures, it's also a remarkable mix of traditions, ideas and classes; a fascinating study in the vast divides between people.

I went to a small alternative school in the city. Because it discouraged competition, I had to play county sports, where, three seasons a year, there was more than a little Slim Shady in everyone around me.

The Roanoke Times, the local newspaper, recently ran a four-part series on being gay in Roanoke. They were essentially sympathetic but hardly strident pieces, making a plea for tolerance mostly through the example of nonjudgmental observation.

The series was met with a torrent of criticism from people appalled that the paper would defend tolerance. The newspaper ran a follow-up piece addressing the reaction. An editor wrote:

Many readers, though, said they would have been happier with no stories at all.

"Roanoke is a conservative town," one woman said. "To dedicate the number of pages to the gay lifestyle is disgusting."

Other readers said the series painted a false picture of the Roanoke Valley. They said it made Roanoke appear more accepting of homosexuality than it truly is, and they worried that the stories would attract more gays and lesbians to the region. Some even worried that it would drive away residents offended by the gay lifestyle.

Welcome to deepest, darkest America. It's this America that Eminem, in the tradition of great Southern realists such as Dorothy Allison, illustrates vividly and accurately. This aspect of his art is the one that most of his critics, in their rush to gain the moral high ground, have missed or ignored. "The Marshall Mathers LP" sheds a scary light on a phenomenon both rural and urban, Southern, Northern and American: for lack of a better word, white trash.

His critics accuse Eminem of making this, um, lifestyle cool (a charge given an ironic credence by fawning rock critics). Yet he's much smarter than that. You don't have to have a degree in semiotics to recognize that an album with three multilayered, untrustworthy narrators -- Eminem, Marshall Mathers and Slim Shady -- can hardly be charged with the straight-up advocacy of anything.

Anyone waiting for the real Slim Shady to stand up is going to be there awhile. If you missed this in giggling about Jennifer Lopez impregnation fantasies, however, he also shows a humane side. In "Stan," a beautiful song that reads like a good short story, he writes to a fan:

And what's this shit you said about you like to cut your wrists too?
I say that shit just clownin' dawg, c'mon, how fucked up is you?
You got some issues, Stan, I think you need some counseling
To help your ass from bouncing off the walls when you get down some

A lot of people think ...
That what I say on record
Or what I talk about on a record
That I actually do in real life ...
If you believe that ...
Then I'll kill you
("Criminal")

Here he's doing what he does best -- calling people out. He's as bad as you imagine him to be.

Yet we have every right to be scared by Eminem. We're not worried about rock critics and essayists abusing their girlfriends because of this album, any more than we're worried about Yale students reading the Marquis de Sade. We're worried about dumb people listening to this album. And we should be. If Eminem doesn't scare you, visit some of his fan sites. On antimusic.com, Mechelle writes:

"Eminem is the bomb. If you agree you rock. To all ya out thiere that hate him, you suck peoples penis! you guys are gay pussys! hes the hottest mother f*cker out thiere!"

Two types of people listen to Eminem. There are some who appreciate his language and narrative as it should be appreciated: as good literature. There are also those who think his darkest manifestation, Slim Shady, is someone to be emulated. As many albums as he's sold, both types obviously exist in droves. I'll leave it to your personal balance of optimism and pessimism to decide just what the percentages are.

This is where his genius lies. "The Marshall Mathers LP" succeeds in the manner that truly great art should always succeed. First, it describes a problem -- and not in the distanced, pleasant way that, say, Arrested Development does (or, rather, did).

Second, it proves the problem is real, scarily real. Significantly, it does this as much through album sales as it does through language.

Finally, it has the guts to terrify people, to get people mad.

But if there's a problem here, it's us. The people with the reason, education and humanity to fix the problems that Eminem writes about are more interested in fixing him. Rather than concentrate on devastating income gaps and a shoddy educational system, his critics -- on both the left and the right -- would prefer he tone down the darkness that is essential to the effectiveness of his work, or shut up altogether. And because no one will go far enough to suggest that he be banned or otherwise restricted, none of this really amounts to anything at all.

This is why he deserves record of the year, and any other Grammys he doesn't give a damn about: because it will piss people off. As Zack de la Rocha of the late, great Rage Against the Machine put it, "Anger is a gift," and our anger is Eminem's gift to us. It's not as if the Grammys have ever been in touch with the most important or even the best records since, oh, Bobby McFerrin won an armful of statues for "Don't Worry Be Happy."

Eminem is most likely not going to win record of the year. But the awards are still a barometer of the music industry, if not popular culture or good music. This year, in the record of the year category, NARAS has a number of choices before it. The members could honor Radiohead's "Kid A," which is sufficiently arcane and audience-unfriendly to be art; Paul Simon, for making, in "Still the One," the thousandth or so pristinely produced album of his career; Beck, for making "Midnite Vultures," the best party album in, oh, a few months; Steely Dan's "Two Against Nature," an arch collection of state-of-the-art jazz-pop songs; or Eminem, an artist of immense social significance and creative talent, the only artist in the crop who is taking real risks, who is standing up and telling society something that it truly, genuinely doesn't want to hear.

In his first album, Eminem -- rather, Slim Shady -- claimed "God sent me to piss the world off." I'm starting to believe it.

Whet Moser is a 2000 graduate of Deep Springs College. He has written for the News & Observer in Raleigh, NC, the Roanoke Times and other publications.