Oil tycoons on the submarine

The list of civilians aboard the USS Greeneville doesn't reveal a fundraising scandal, but it does underscore the link between money and access to power. 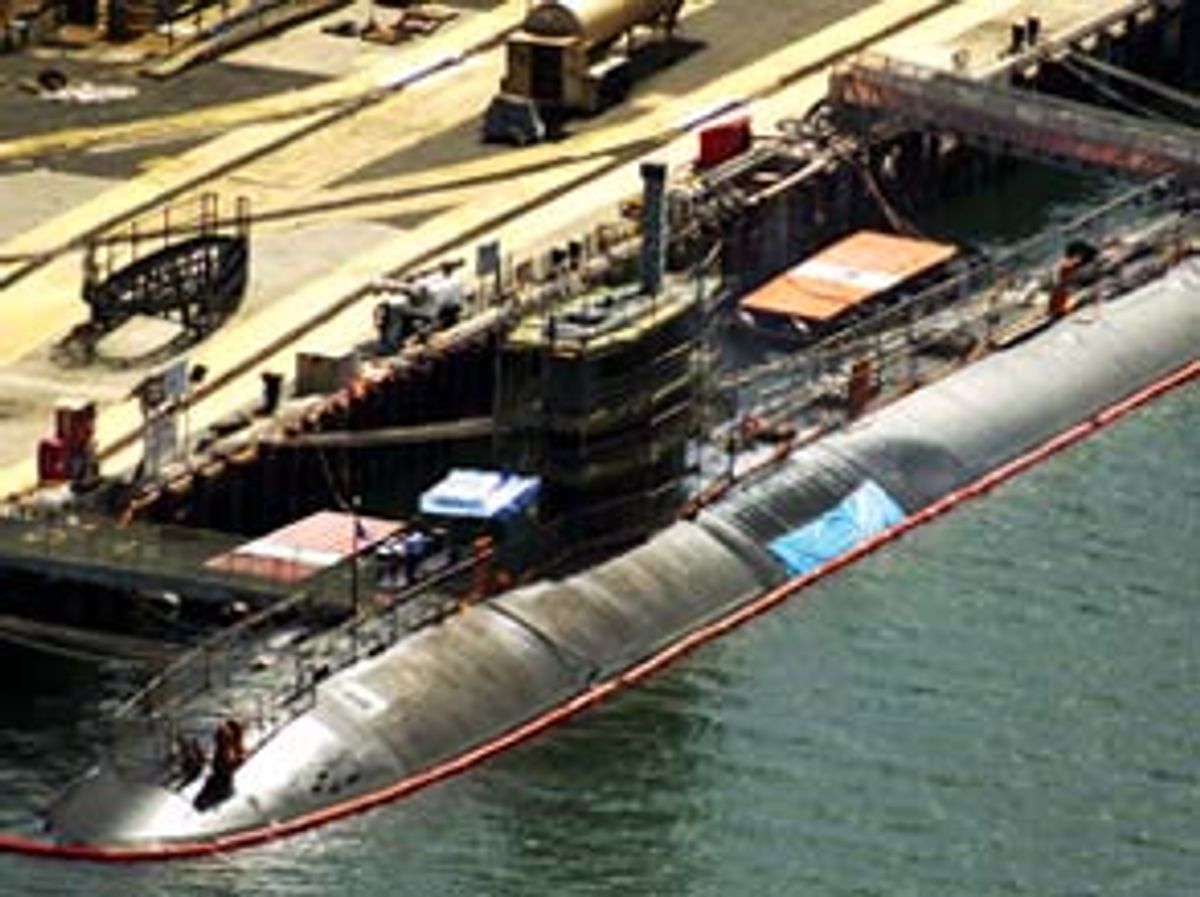 Texas oil money will buy you access to more than just Washington environmental policy. Apparently, it will also get you a seat on the USS Greeneville. If you're lucky, the sub's captain might even let you have a go at the controls.

Following its initial investigation of the sinking of Japanese fishing vessel Ehime Maru, the Navy finally released Saturday a list of civilians who were aboard the USS Greeneville the day it rammed into the Ehime Maru, killing nine passengers, including four Japanese students.

As we get further away from the accident, it's becoming obvious that the press (including Salon) may have overblown the role in the incident of contributors to a nonprofit organization seeking to preserve the USS Missouri as a Pearl Harbor memorial: Only four of the submarine's civilian guests have been shown to have direct links with that organization. Still, the list does reveal much about the connections among money, politics and power.

The main criticism lodged against the Navy so far has been that it allowed civilians at the controls of a nuclear submarine -- a powerful and lethal weapon with great capacity for accidents or destruction. The purported scandal within the scandal is the presence of contributors to the USS Missouri Memorial Association, of which former President George Bush is honorary chairman. And two civilian passengers who were aboard the Greeneville seem to tie the threads together.

These two passengers, John Hall and Todd Thoman, told NBC's "Today" last week that they were allowed to participate in the emergency surfacing procedure that resulted in the accident. The New York Daily News reported Friday that Hall is a Texas oilman who has been "a player in several multimillion-dollar gas and pipeline deals."

In addition to their oil ties and their turns at the wheel, Hall and Thoman have another tie that goes to the heart of the Greeneville controversy. The Honolulu Advertiser reports that the company they run, Fossil Bay Resources, donated $7,500 to the Missouri Memorial Association, although the check was returned after the delay of a planned fundraiser.

Not coincidentally, the trip aboard the Greenville was organized by former Adm. Richard Macke, a volunteer for the Missouri Memorial Association and former commander of the Pacific region. Macke was ousted from the Navy for making an untoward remark about the rape of a 12-year-old girl in Okinawa, Japan, in 1995 by U.S. troops stationed there.

The only civilians onboard the submarine known to have contributed directly to the Missouri Memorial Association were Mickey and Susan Nolan of Honolulu. According to the Honolulu Advertiser, the Nolans were working with Thoman and Hall to organize a celebrity charity golf tournament to benefit the association.

In a statement released Sunday, Missouri Memorial Fund executive director Don Hess stated that the organization had searched the list supplied by the Navy against its records of contributors, and only the Nolans were on both lists.

Even if the links between the fund and the passenger list don't reach the level of a national scandal, there are other curious connections between the Greeneville's civilian passengers and recent scandals, corporate politics and the political money machine in general.

Passenger Hellen Cullen comes from a family that has business links with pardoned felon Marc Rich. Cullen's father-in-law, Roy Cullen, is the owner of Quintana Petroleum of Houston, which, the New York Daily News reports, created a business partnership in Argentina with Rich's Suedelektra Holdings during the 1980s. One unidentified White House source told the Daily News that there was a "tremendous amount of nervousness at the White House about who these guys are." The Cullen family has donated tens of thousands of dollars in soft money to the Republican Party. And Roy Cullen donated $1,000 to George W. Bush's presidential campaign.

There weren't any blue-collar workers or civil servants among the civilian passengers on the USS Greeneville. Most, if not all, had political or military connections. And therein lies the rub, for it makes the Navy appear to be guilty of the same kind of influence peddling that has virtually gridlocked legislation in Washington.

"Contributing to elected officials is somewhat different, but there are some analogies you can draw," says Larry Noble, executive director of the Center for Responsive Politics in Washington, which studies the connection between financial contributions and political access. "Obviously, the analogy is that you're buying something for your contribution. With an elected official, you're buying access to the official. Here, you're allegedly buying access to a submarine.

"But there's a difference," Noble says. "I'm more concerned about buying access to an elected official than being given a ride on a submarine -- obviously putting aside the tragedy that came from it, which isn't related to the contribution."

The bigger problem, Noble argues, is the degree to which money buys access in American culture. "We live in a society where those with more money get access to more things. They get access to elected officials -- and if that's what they were using for deciding who gets rides on submarines, then you have a problem of perception that will blow up."

Whether or not the Navy's policy directly leads to accidents or other negative consequences, it has struck a nerve with many Americans. "You have a situation where people with money get access to things that are otherwise public assets," Noble says.