The Grammys bring in the bad boy of the moment to boost ratings. 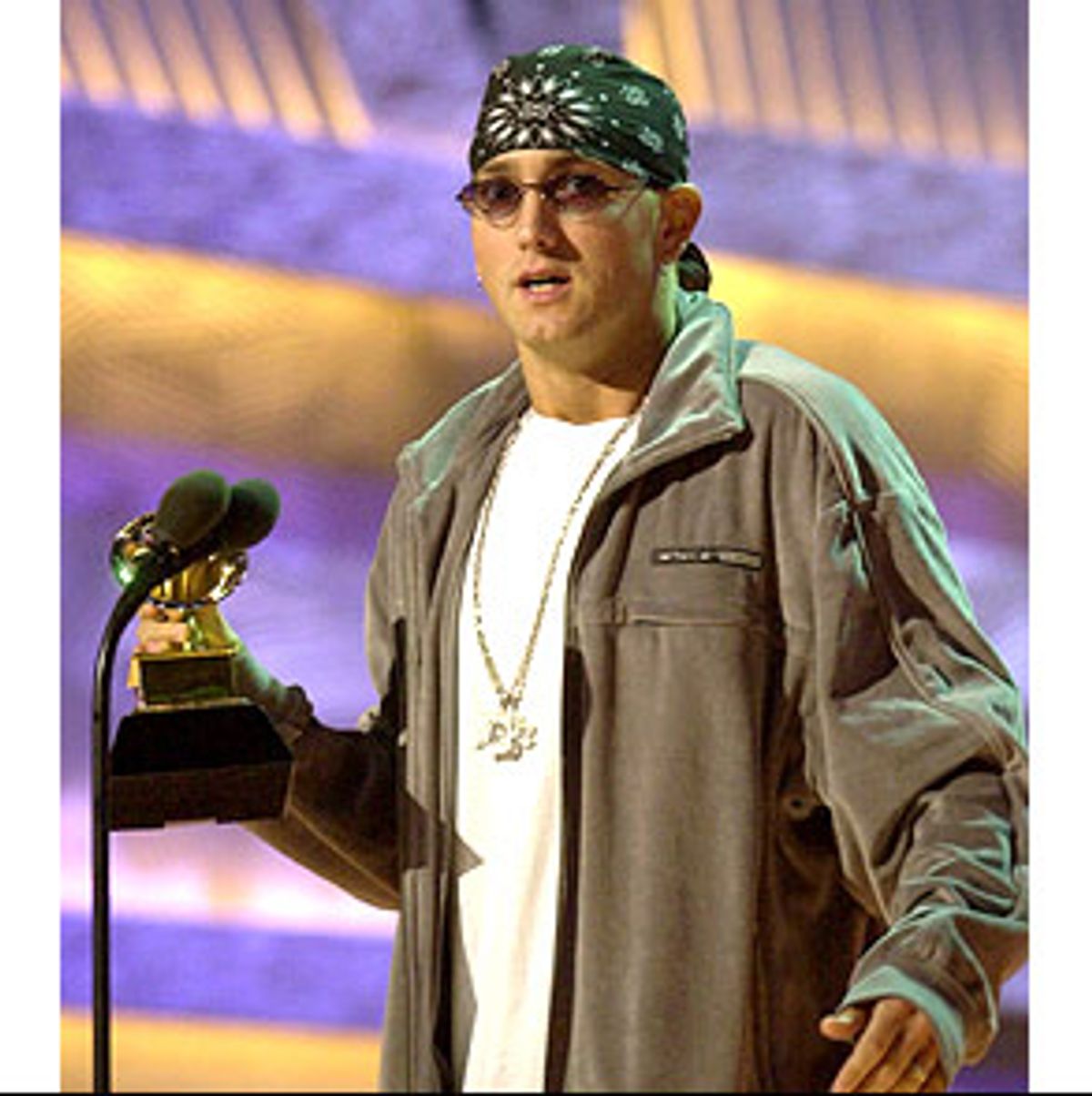 In a ham-fisted attempt to be scandalous, and betting the controversy would translate into ratings, the National Academy of Recording Arts and Sciences handpicked Eminem's hate-filled album, "The Marshall Mathers LP," for an album of the year nomination at this year's Grammys show.

8 p.m.: Madonna kicks off the show, broadcast live from the Staples Center in Los Angeles, with her nominated single, "Music," complete with a cameo from pint-size rapper Lil' Bow Wow. In a business short on sustainable star power, the music industry needs Madonna more than she needs it. Her performance is sublime, smart and loaded with star power.

8:06 p.m.: Host Jon Stewart seems almost catatonic with his first few jokes. He regains the crowd with an Eminem riff: " I met him backstage [pause] and he is really gay."

8:08 p.m.: Madonna promptly loses the best pop female vocal award to Macy Gray, who's still riding on her 1999 hit "I Try." (The Grammy qualifying year, for some unfathomable reason, goes from October to September.)

8:11 p.m.: CBS airs its first plug for the Eminem and Elton John performance.

8:19 p.m.: Teen chat rooms across the country explode as Justin Timberlake from 'N Sync debuts his new crew cut. The group, which performs the forgettable ballad "This I Promise You," remains in serious need of a stylist.

8:25 p.m.: Steely Dan confuse the country by winning a Grammy 26 years after they should have.

8:27 p.m. A beer commercial suggests, in only somewhat tongue-in-cheek fashion, that a quarter of a century ago a black DJ at a block party spilled his Heineken -- yes, his Heineken -- and inadvertently created the art of scratching records.

8:42 p.m.: A public service announcement features the mother of slain gay college student Matthew Shepard urging viewers to think of the consequences of words like "faggot" and "queer" -- strong evidence of the influence on CBS of MTV, the hip face of corporate parent Viacom.

8:44 p.m.: Paul Simon performs the title song of his nominated album of the year, "You're the One," which opens with this lyric: "May 12 angels guard you while you sleep/Maybe that's a waste of angels I don't know."

8:48 p.m.: Eminem wins the award for best rap album. He thanks those who were able to "see the album for what it is and also for what it isn't." He then pulls out a list of managers, lawyers and record company executives to thank -- and brings on a new group of his to plug. What a rebel.

8:56 p.m.: Faith Hill performs with an orchestra. She's the crossover queen from country, a sort of Celine Dion of 2000 (except she's drenched in sex appeal), with her grand A.C. radio love anthem "Breathe."

9:02 p.m.: U2 perform. Thankfully the band has returned from its self-imposed exile to the bloated world of ironic culture.

9:07 p.m.: U2 win for best rock performance by a duo or group. Lead singer Bono says, "Thanks for playing it on the radio." He's serious.

9:14 p.m.: Sheryl Crow and Shelby Lynne, who has been around for a decade but is for some unfathomable reason nominated for best new artist, perform together. Hmm: two women, one guitar. Real music. How'd they get on the Grammys?

9:25 p.m.: On "Larry King Live," Darva Conger and Rick Rockwell reunite for the first time since their disastrous made-for-TV wedding last year on "Who Wants to Marry a Multi-millionaire?" They still seem very uncomfortable together.

9:27 p.m.: Back at the Grammys, R&B songstress Jill Scott is joined by Moby and the Blue Man Group. Scott sings the gospel sample from "Natural Blues." (The original voice was Vera Hall's.) The Blue Man Group, who now have a long-running multicity franchise for their once-underground show (and appear on Intel commercials, to boot) shoot confetti into the crowd and play their odd percussive pipe drums really loud.

9:33 p.m.: Lynne wins best new artist. On her way to the stage she passes country crooner Vince Gill, who is the only person in the VIP seats standing and applauding. Lynne thanks her parents from the stage. Most viewers don't know that at the age of 16 she watched her father murder her mother and then kill himself. At 18, Lynne moved to Nashville.

9:35 p.m.: Over at "The West Wing," Leo, the president's chief of staff, demands that the surgeon general hand in her resignation or the president will fire her.

9:45 p.m.: CBS is excited about the "special presentation by Eminem and Elton John."

9:50 p.m.: Budweiser fires back at Heineken with its ingenious "What are you doing?" parody ad, featuring square yuppies drinking imported beer in a green bottle and trying to act cool.

9:51 p.m.: Macy Gray performs "I Try" with a 20-piece, purple-bewigged band (highlighting a hue in her outfit). The song seems really old. Gray's album was released in July '99; the single became a hit on radio in early 2000.

9:56 p.m.: Upon winning record of the year, U2's Bono tries to salute other bands in the auditorium but ends his little speech with the James Cameron-like announcement "It's our night." The band has won three awards for one single. U2's album "All That You Can't Leave Behind" was released too late last year for consideration; the single wasn't.

10:03 p.m.: Teen pixie Christina Aguilera, last year's best new artist winner, descends from the ceiling singing something in Spanish and gesticulating wildly. Like Hill and Gray, Aguilera has an orchestra, only it's much, much larger. Fireworks erupt and Aguilera and an army of dancers shake their things.

10:08 p.m.: For some unfathomable reason Gill presents the best Latin pop album award. Country fans at home ask themselves, Why are we watching this telecast? Two hours into the show, not a single Nashville note has been played. (Hill's "Breathe" doesn't count.)

10:30 p.m.: Country token Brad Paisley sings a portion of one of his songs.

10:37 p.m.: Hill wins best country album. She thanks her parents for letting her go see Elvis in concert when she was 8.

10:39 p.m.: Michael Greene, head of the Grammys' parent organization, takes the stage. The first part of his spiel is a reeled-off list of lifetime achievement awards to the likes of Brian Wilson and Tony Bennett. Incredibly, the winners don't come up onstage -- Greene merely invites the crowd to give them a hand.

Then comes the second part, a long apologia for Eminem. "We are not here to commercialize art," Greene says. (This is true, though he doesn't go on to say that the Grammys' true purpose is to award commercialization.) He compares Eminem to Elvis, the Beatles and the Rolling Stones and rolls out by-now bloodied clichés about how Eminem's murderous and gay- and woman-bashing album is merely the voice of rebellion and -- all together now -- "a mirror of our culture." Earlier in the week Greene said, "Being a champion for something people may not like has always been what the Grammys are about." Which explains the award they gave to Milli Vanilli.

10:47 p.m.: Eminem and Elton John finally appear to perform "Stan." Eminem, who rapped on his album about not giving "a damn about the Grammys," has apparently had a change of heart. His album has slipped out of the top 50 and he's barely in MTV's rotation; a prime-time TV appearance will certainly produce a boost. The rapper throws out a few obscenities to tease the censors and look tough for his fans. As for John, who released two flop albums last year, he sings the chorus; like Jill Scott, he agreeably vocalizes what on the record was a sample of a song called "Thank You" by a singer named Dido.

Three years ago John sang Psalm 23 at the funeral of Gianni Versace. Wonder what Sir Elton would have done if he'd been asked to sing a duet with Eminem on "Criminal," complete with this lyric:

Starin' at my jeans, watchin' my genitals bulgin' (Ooh!)
That's my motherfuckin' balls, you'd better let go of 'em
They belong in my scrotum, you'll never get hold of 'em
Hey, it's me, Versace
Whoops, somebody shot me!
And I was just checkin' the mail
Get it? Checkin' the "male"?

11 p.m.: You didn't think Eminem was actually going to win the record of the year Grammy, did you? After all the buildup, Steely Dan take the statuette, completely confusing the viewing audience, most of whom don't know that Grammys are awarded by an extremely conservative group of aging record makers. Nobody under 40 in America owns a copy of the Steely Dan record -- but that's just the point.

The big winners, then, were a couple of old-time rock bands, one from the '70s (Steely Dan), the other from the '80s (U2), who together collected a total of seven awards. In the context of the Grammys, this was positively modern. Last year, the organization gave a total of nine awards to an album by Carlos Santana, whose heyday was in the '60s.

In other words, the wildly hyped telecast turned out to be surprisingly sedate. When Steely Dan won the final award, you could hear the air going out of the Staples Center. In the end, though, the show and Eminem each got something out of the deal. The NARAS got juice for its broadcast without actually having to give up an important award to a psycho, and Eminem got a prime-time TV spot and a minor Grammy he can brag about. But it was all par for the course for the Grammys.