"Dreamcatcher" by Stephen King and "Ordinary Horror" by David Searcy

King's latest book takes a page from "The X-Files," while an elegantly literary debut tells of creeping, formless suburban terror. 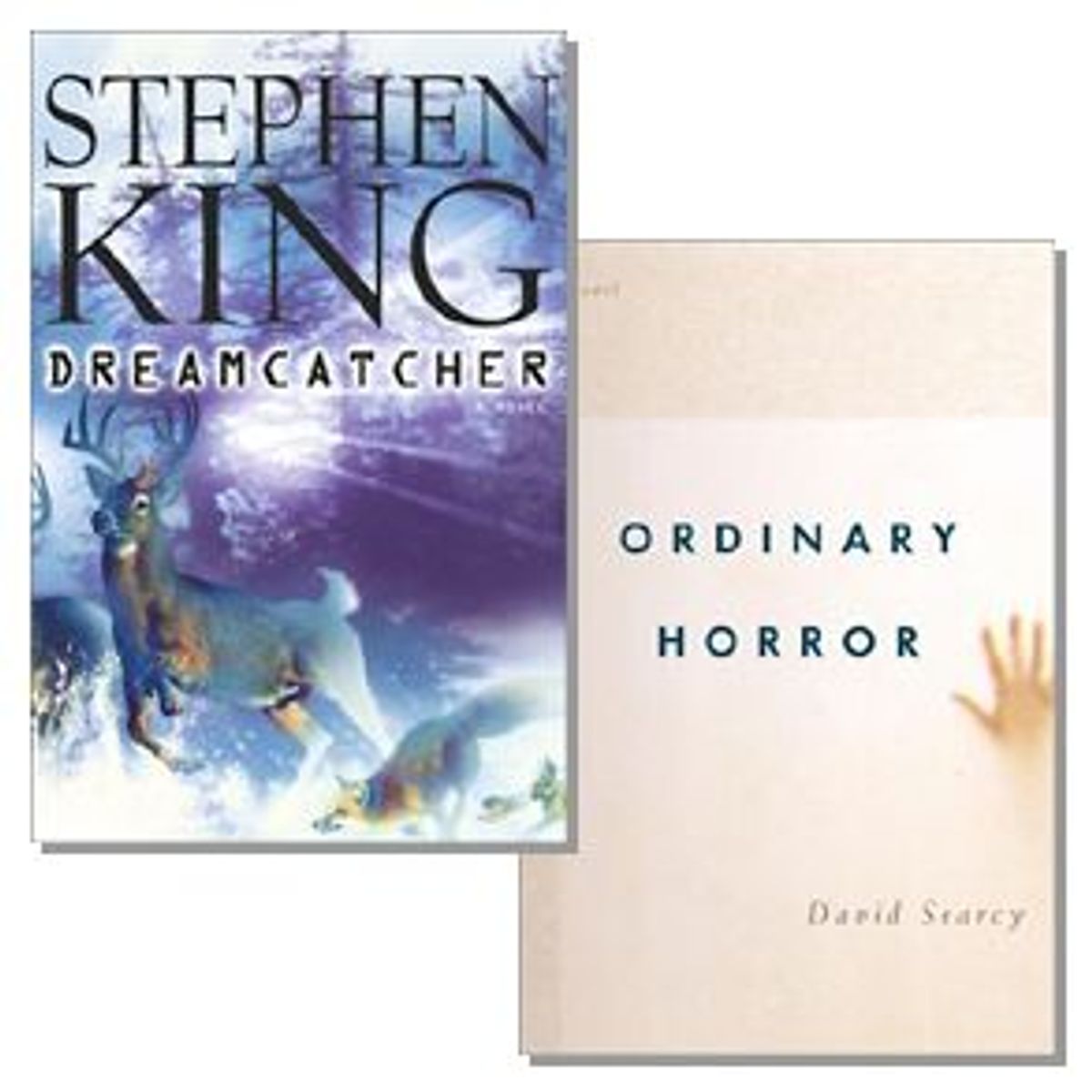 It starts with a quartet of boyhood friends, regular guys with failed marriages, unrealized dreams and a few too many beers under their belts. There's something noble yet scary, uncanny yet quintessentially childlike, in their shared past. Then there's the rural Maine setting, all too easily cordoned off from the larger, saner world, a place where terrible things can transpire unnoticed. A few slightly off occurrences -- beginning with a man who stumbles up to a hunting cabin with a story about being lost in the woods that doesn't quite add up -- soon balloon into the rumblings of full-fledged menace. The natural world fills with signs and wonders; bodies begin to corrode; a powerful, megalomaniacal madman goes on the rampage; and then a snowmobile comes careening down a mountain road with "some terrible black energy" at the controls, leading one of the heroes to think, "Every bad thing he had ever suspected was now coming toward him, not on a pale horse but on an old snowmobile with a rusty cowling. Not death but worse than death. It was Mr. Gray." That's when you know Stephen King has returned to form.

The famous King formula -- the teaming of stuff as mundane as rusty cowlings with mind-blowing über-evil -- took a little vacation with the 1998 novel "Bag of Bones," King's shot at an intimate psychological creepfest. "Bag of Bones" was a solid Gothic, but the fans didn't bite, or at least not in as great a number as they have in the past. "Dreamcatcher," his first full-length novel since then, features more explosions and car chases, more gore and more skin-crawling horror. It will make you see bacon and the mold that grows on food left too long in the fridge in a whole new and unsettling light. The fate of the world hangs in the balance, with a breathless race leading up to a denouement designed to induce nail-biting. In short, it's a more reliable genre vehicle, with the kind of panoramic framework, large cast of characters and grandiose themes that work so well, in entirely different trappings, for Anne Rice.

"Dreamcatcher" is also King's post-accident novel, written by hand as he was recovering from being hit by a car while walking on a road near his home. The author sustained grave injuries, and one of the characters in "Dreamcatcher," an assistant professor called Jonesy by his buddies, has had nearly the same experience; it leaves him with a broken hip and foggy memories of having cheated death. (We can only marvel to learn that it took King six and a half months to write a 600-page novel in longhand.) This isn't showy or self-pitying; instead, Jonesy's exasperation with his faltering body is one of the details that ground the book. For even when King's dishing out cranked-up scenarios involving military command centers and the threat of global plague, he keeps his homey touch. Though the larger stage mechanics of "Dreamcatcher" sometimes feel creaky, even occasionally rote, there's a reverent attention to the friendship rituals of men and boys, to the wobbly self-confidence in an accident survivor, to the sheer difficulty of being a reasonably decent person, that rings true.

What doesn't, or at least not always, is the horror. Too many of the elements in "Dreamcatcher" seem borrowed, from the premise -- quite early in the book we realize we're in "X-Files" territory, though there's a dab of "The Andromeda Strain" too -- to the characters. The semipsychotic special forces commander who runs amok through the novel is named Kurtz, but the fact that King acknowledges this "Heart of Darkness" and "Apocalypse Now" gloss, and the fact that the character himself has knowingly chosen the name, doesn't make this any less of a groaner. He's still a store-bought figure, even if King has intentionally left the tag on. "Dreamcatcher" is studded with pop culture references from Scooby Doo to the "Alien" movies to an apparently meaningless reference that only serious "Lord of the Rings" buffs will catch: a character named Underhill. There's even a sly bit about "The Florida Presidency" that makes "Dreamcatcher" notably timely for a novel.

King is the last writer you'd expect to go winkingly postmodern; his characteristic use of brand names and TV show titles usually serves to anchor his books in quotidian suburbia -- all the better to creep us out when the going gets weird. That's the trouble, though, with "Dreamcatcher": It's not creepy. King's plotting here is as expert and enjoyable as ever, and there are plenty of grisly deaths and occasions for squirming disgust (that alien fungus ...). In fact, King has become so adept at making his good characters likable that the book's inevitable losses strike the reader hard. But the hair on the back of my neck remained serenely in place throughout, whereas, say, that bit with the refrigerator magnets in "Bag of Bones" and pretty much all of "Pet Sematary" (possibly the scariest book I've ever read) had me deliciously spooked.

Our tastes in recreational fear are as idiosyncratic as our tastes in erotica, even if most horror fans probably do prefer the graphic gross-outs of a book like "Dreamcatcher." More literary, less explicit tales of terror are harder to find, perhaps because they're less in demand. But anyone who shuddered at "The Turn of the Screw" or considers the '60s film "The Haunting" to be more frightening than any special-effects-laden gorefest will appreciate "Ordinary Horror," a first novel by David Searcy. Like a King novel written by Joseph Conrad ("Heart of Darkness" is echoed in this novel, too), it's set in a Midwestern suburb where the tract homes, "given twenty or thirty years to mellow, lose none of their bleakness."

Frank Delabano, a widower of about 70, lives in one of these tract houses, devoted to his garden and his solitude. When a bunch of what look like gopher holes show up on his lawn and flower beds, he mail-orders a bunch of spiky bromeliads from an ad in the Sunday paper that promises the plants will chase the pests away. Everything that happens next -- the package on his doorstep with no return address, the terrible-smelling mulch that comes with the plants, the way they grow so darn fast -- spells trouble, of course. But the strange pall that steals over Mr. Delabano and his neighborhood hovers tantalizingly between the ordinary and the uncanny. The streets are remarkably quiet; there seems to be a rash of missing pets; Mr. Delabano finds the corpse of a somehow unidentifiable run-over animal in the middle of the road and occasionally he sees similar creatures -- lost dogs? -- in the distance; flocks of cicadas and grackles visit his yard; and what's that weird smell? The little girl next door keeps drawing the same black scribble in picture after picture. "Do you know what that is?" she demands of Mr. Delabano.

"Yes," says Mr. Delabano after a minute. It's ... densely scribbled with so much pressure there are ridges of crushed crayon; he imagines a little hand pressing down that hard, trying to form such a notion, so violent and obscure it's hard to tell anything's there but there is, buried in the effort, a suggestion of a head and a mouth. Eyes possibly. "Yes," he says again, "I think I do." He's looking at her now. "I think it's a very bad dog."

Why this particular conversation should provoke such a deep shiver is a matter of sheer alchemy. Searcy conjures up an atmosphere in which fog outside a window or shadows against the bedroom curtains seem filled with a formless, almost unbearable significance, a meaning that refuses to solidify and remains all the scarier for that. Mr. Delabano's already living in a kind of dream world, a state of suspension that inevitably raises the question of what he's waiting for. Remember what it felt like to stay home sick on a school day, the strange somnolent quality of a house that would otherwise be empty, a place removed from the world's activities? Sick or not, every one of Mr. Delabano's days is like this, and Searcy meticulously crafts this trancelike mood with long, unspooling sentences about deserted yards, the sound of a car door slamming in the distance and the vast, unnerving prairie at the edge of the subdevelopment.

Theorists have written that horror collects in the space between categories we consider mutually exclusive; all of our favorite monsters are either both living and dead or both human and animal. Perhaps that's why the suburbs -- both country and city -- seem a particularly fertile ground for growing tales of terror. Everything that happens to Mr. Delabano has two possible explanations: one ordinary, the other horrible. And Mr. Delabano himself has become a creature of places in between; he's not quite part of life and not quite departed from it, either. The other horror story in this slim and ominous volume only very rarely seeps into Mr. Delabano's consciousness. It comes in the form of fleeting images of overlit hospital rooms and murky X-rays and in the remembered sweetness of his wife's voice.