Dad hit us, Mom watched, and then -- a miracle. 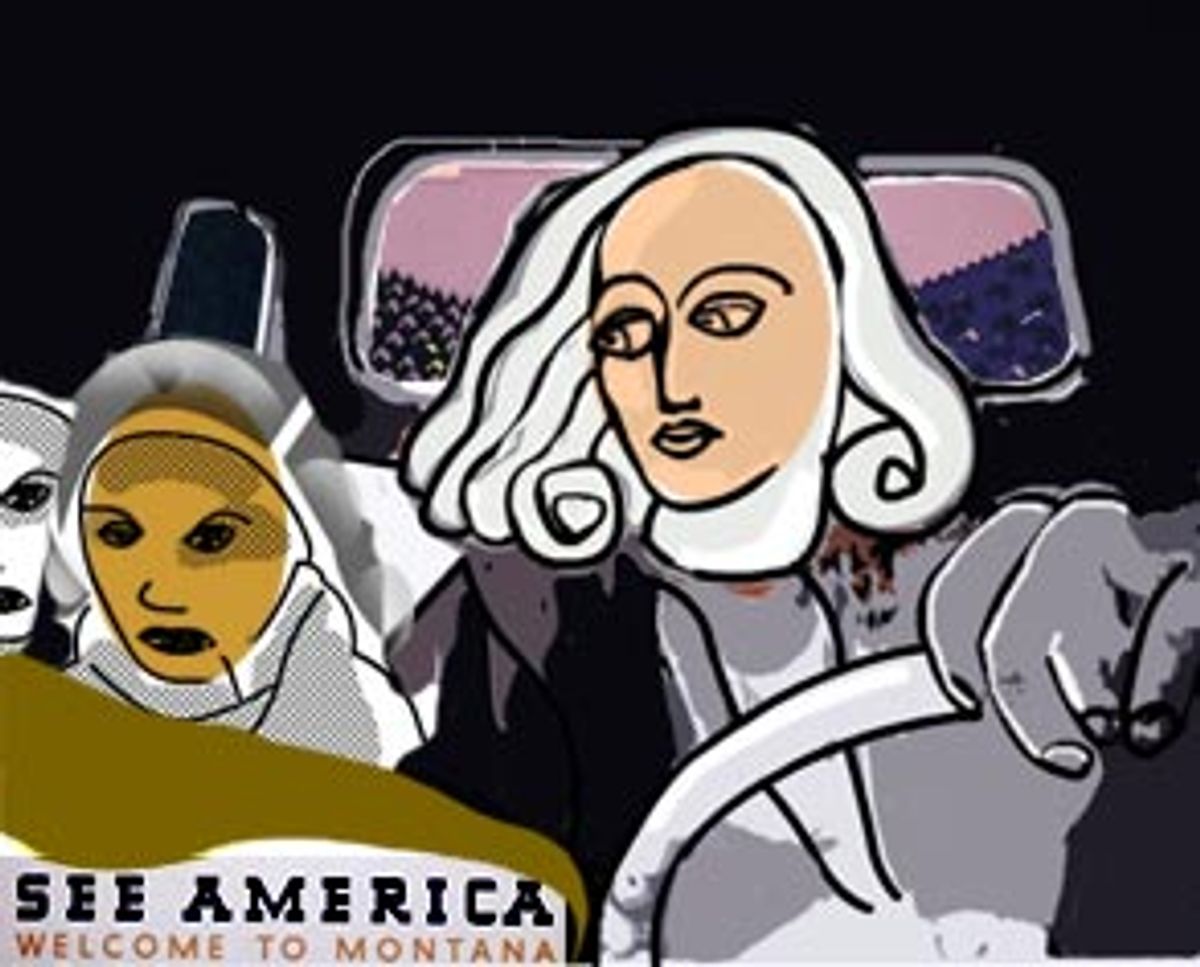 They say that parenthood is about choosing your battles. So is childhood. The only difference is that parents can choose from a more extensive set of weapons than children. Parents have words. They have money. They have brute strength. They have power. Children are like occupied territories. Their claims to autonomy often exist at the whim of what can seem like imperial potentates who set their bedtimes, choose their clothes, control their whereabouts and set their limits. And, like residents of occupied territories, children learn that the more oppressive the state, the more will and ingenuity it takes to find liberation. Even then, you sometimes need a miracle.

For my father, parenting wasn't about choosing battles. It was the battle. He was a soldier descended from a long line of soldiers and heroes. His ancestors fought in the Revolution. They fought in the Civil War. His father, a general, was the first American officer to arrive in Munich during the Allied invasion of Germany.

Like his three younger brothers, my father enlisted in the Army; but he had the bad luck of serving during the late 1950s -- peacetime. By the time I was born in 1965, he worked as an electrical engineer for Sylvania Electric. He made televisions. At least that's what I believed, and that's what I told the polite grown-ups who asked.

Funny industry, TV manufacturing. You have to jump through a lot of hoops to get ahead. We relocated all the time. By the age of 7 I had lived in New York, North Dakota, Montana, Utah and Montana again. The working conditions were outrageous. On the odd occasion my father needed a ride to work, the whole family would pile into Betsy, my mom's beloved red Volkswagen bug, and we'd cruise out of town, past the farms and ranches that skirted the city limits, past the nearby campsites. We'd drive until we reached an isolated stretch of highway surrounded by a flat expanse of long, wild grasses imprisoned behind an endless barbed-wire fence. At no place in particular my dad would say, "Stop here."

Mom would bring Betsy to a stop in the hard, dry dirt beside the road. My father would get out and wave, and we would wave back as the car swung a wide U-turn and headed home. I didn't know if my father walked from the road to a hidden, secret TV-making plant, or if a car with official, secret TV-making people would come by and take him there. All we ever saw was Dad standing by the edge of the road, waving.

The thing is, I was misled. Years later I learned that my father did not really make television sets. He worked for a defense contractor that made nuclear missiles. In particular, he worked on Minute Man missiles buried in deep underground silos scattered across the western half of the northern United States. In the paranoid frenzy of the Cold War, my father's missiles were our nation's salvation.

And in my father's thinking, a doubled-over black leather belt was our family's salvation. Whipped repeatedly and forcefully on our bare, red bottoms as we lay on his lap or leaned against a piece of furniture, the belt was his main line of defense in the war against spoiled-rotten, back-talking, disrespectful, lying, ungrateful, careless, lazy-ass girls by the names of Laurie, Lynne and Margaret.

In the litany of childhood sins, I would call the offenses of my sisters and me laughably innocent and small. I think the worst thing one of us did was change a D-plus into a B-plus on a report card. It didn't fool anybody. My father was like one of those police departments that haul in criminals for small crimes in the hopes of deterring big ones. He didn't let anything by him.

As a parent, I appreciate his intent. Who doesn't want to nip their children's antisocial tendencies in the bud? But what my father did was wrong, and not just because he hit us. He ignored the context of our actions. It didn't matter if I furiously threw a glass against the wall or if it slipped out of my hands and onto the floor while I was washing the dinner dishes. The sanction was the same.

What my father didn't realize is that a state controlled by fear and perceived injustice is destined to fall. My sisters and I tested the boundaries of authority in the subtle and not-so-subtle ways that marginalized people always do. As much as the sting of leather against flesh hurt, we never cried. Control over our tears was the one response to violence we could assert.

Beyond that, we approached our powerlessness in different ways. Laurie, the oldest, was boldest. As she stepped into adolescence she began to rebel. My father called her a liar. Lynne took on the Neville Chamberlain role by always seeking appeasement. She's the only 11-year-old I've ever known to voluntarily do the laundry and buff the linoleum, anything to keep the peace.

I hid. When I was very small I hid under my blankets, convinced that what I could not see could not see me. I hid in the dog food closet, under desks and beds, in the darkness of the basement. I learned to like the solitude and sometimes I hid just for the peace and quiet of it. I also retreated into a world of imaginary friends and lands. I wrote plays and stories and pretended I was a rock star. I invented so many worlds safer than my own.

My sisters and I were, and are, very different. Because of the differences, and because powerless people fight in the only arenas they can, the three of us battled one another ferociously. We yelled. We pinched. We scratched. We hit. We kicked. I freely admit blame. As the baby of the family, I played the older girls off each other like nonaligned countries used to play off communists and capitalists.

But when it came to my father, we adhered to a common spirit of resistance. We looked out for one another. We knew what information to hide and what information to share. The house key incident comes to mind. When I was in third grade, Sylvania wanted to transfer my father to an Army base in the San Francisco Bay Area. My California-born-and-bred mother couldn't wait. The base was mere minutes from her parents' home. No fan of big-city living, however, my father quit the defense racket and opened a laundromat in a small Montana town. My mother went to work at the new business and my sisters and I became latchkey kids. We each received a shiny red key, but since my older sisters got home after I did, I became the key master.

Unfortunately, I kept losing my key. It fell out of my pocket. It fell out of my shoe. Mom put the key on a metal chain that I wore around my neck. I lost that too. Each time I lost the key I got spanked. It wouldn't have been such a problem except that my dad, the now self-employed ruler of his domain, sometimes came home early to check up on us. I feared going home. I enrolled myself in catechism, even though my family never went to church. I hung out on the playground. I took new and longer scenic routes home.

But this is Montana we're talking about and it could get really cold. Besides, an 8-year-old girl has got to pee sometime. So after a while I would head home. On good days my dad would be working. I'd sit on the back porch and wait for Laurie or Lynne. On bad days he'd be home. That's when the sisterhood kicked in. If I saw his car I'd hide until my sisters returned from school and could slip me in the window or throw me a key. These weren't big heroic deeds, but they were risky, and they bespoke a valued, if often uneasy, loyalty.

The laundromat days were bad. First Dad traded Betsy for a gigantic blue van used to transport motel laundry. Then there was Laurie. Each year she sought more independence and became more rebellious. Too old to be spanked at 15, she found herself grounded for weeks, even seasons, at a time. She'd hide in her room and scowl, and then she'd sneak out and end up grounded longer. But the worst problem was my mom.

My mom was hip and wholesome with a great, easy laugh. She dropped out of college to become a stewardess when being a stewardess was about as glamorous as being a movie star. She hobnobbed with airline executives and reporters. She met my dad at an embassy party in Washington -- an embassy party! Yet she gave it all up to get married at the spinsterish age of 20 because she already thought herself over the hill.

She was a good mom. She made a cake or pie every Friday and a roast every Sunday. She encouraged us, laughed with us. She sang all the time. She made us believe in magic. In the days before salmonella-poisoning scares she had us convinced that the stretchy bands that held together roasting chicken legs were good luck charms. We fought over wearing them on our wrists.

But she was complicit in my father's war. She wanted to be Switzerland. She wanted to be neutral. But when you live on a battleground, you have to choose sides. Inaction implicitly rewards the powerful. I'll say this, she hid or ignored evidence of our misbehavior when she could. But not always. Sometimes, to assert her own authority, she ratted on us. She never stopped him from hitting us. I don't think she considered it a possibility. And it killed her, because she knew we deserved better. She deserved better.

So, at the sunny age of 36, with three scared, bickering kids, a troubled marriage and a job she never wanted or asked for in a town she hated eating at her soul, she started to drown. She took the ubiquitous "nerve pills" that ladies in the '70s took. She drank a scotch on the rocks every night. And she still cried into the German sausage she stood frying for dinner.

I could put up with a lot of things. But I didn't even know how to begin putting up with that. When the Republic of Mom fell, the occupied territories surrendered. When he hit me, I cried.

Then the miracle happened. Mom chose to win. She won by doing what women in her situation often do. She ran. She went home for lunch one day, packed everything she could in the trunk of our unhip boat of a Buick, pulled us out of school, got on the interstate and never looked back.

She drove to California and moved in with her begrudgingly supportive parents. She had no job, no friends, no prospects. She threw out the nerve pills and scotch. All she had was a trunk full of clothes, toys, silverware and three members of the resistance who needed to be liberated. It was her moment of courage and her finest hour.

I'm a soldier's daughter, and I know this much is true. You don't have to be a warrior to be a hero. You don't even have to raise your fists. You just have to believe in something better. And you have to elude the enemy in the ways that you can.

Margaret Finnegan is a writer and historian. Her historical monograph, "Selling Suffrage: Consumer Culture and Votes for Women," was published in 1999. Her writing has appeared in FamilyFun, The Los Angeles Times, and the Oxford Companion to American History.