It's time to bury the ridiculous and insulting notion that the former president is anything but white. 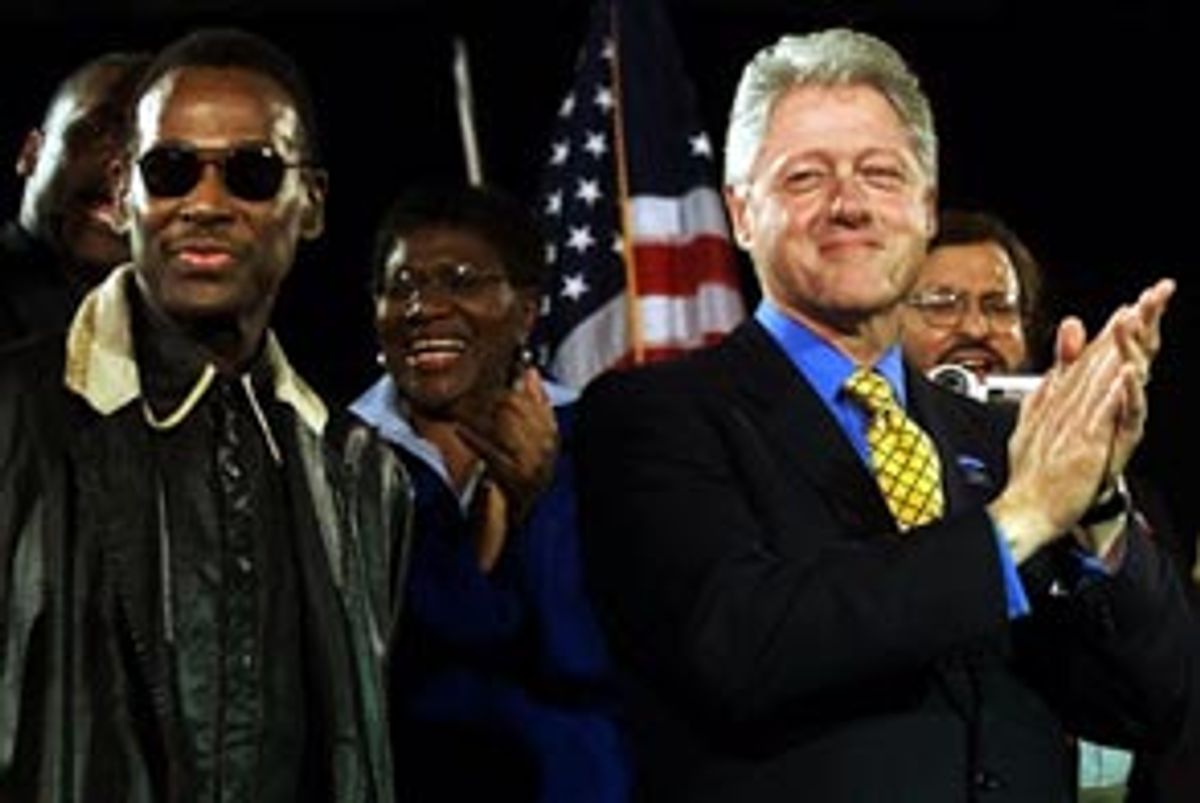 Every time I think it's going to die, it rears its ugly head once again. I'm referring to the dishearteningly durable idea that former President Bill Clinton somehow shares a special kinship with black men. I'm not sure exactly whom to blame for giving birth to this nauseating notion. I do know that it first gained mainstream currency in the fall of 1998, when Toni Morrison launched a spirited defense of the scandal-ridden chief executive in a New Yorker essay. The normally reliable Nobel laureate attempted to bolster her specious argument by unfurling a sequence of stereotypes that would make any self-respecting white supremacist salivate with glee. She contended that African-American men possessed a firsthand understanding of Clinton's difficulties:

Years ago, in the middle of the Whitewater investigation, one heard the first murmurs: white skin notwithstanding, this is our first black president. Blacker than any actual black person who could ever be elected in our children's lifetime. After all, Clinton displays almost every trope of blackness: single-parent household, born poor, working-class, saxophone-playing, McDonald's-and-junk-food-loving boy from Arkansas. And when virtually all the African-American Clinton appointees began, one by one, to disappear, when the president's body, his privacy, his unpoliced sexuality became the focus of the persecution, when he was metaphorically seized and body-searched, who could gainsay these black men who knew whereof they spoke?

In barbershops, churches, diners and taverns, along the sidelines at sporting events, at PTA meetings and during water-cooler rap sessions, I was repeatedly relieved to discover that I wasn't the only person who read Morrison's essay and wondered, what black men? I walk around all day in a black man's skin and rarely in the course of my travels do I trip over any of the "tropes" Morrison attributes to men like me. Furthermore, the black men with whom I associate have not, under any circumstances, engaged in the nonsensical "murmurings" that Morrison describes. Linking Clinton's "metaphorical" frisking to our own experiences -- and those of our fathers and grandfathers -- would be like spitting in the faces of our ancestors, an act of blasphemy most of us would take care to avoid.

In the midst of my dismay I considered the damaging likelihood of white Americans responding as they often have in such situations -- that is, mistaking Morrison's comments as the viewpoint of all black Americans. The danger seemed real given the alacrity with which pundits pounced upon her article. Morrison wasn't the only prominent liberal intellectual to offer a dubious tribute to Clinton in that particular magazine, but her comments were the ones most often dragged through the mud and subjected to the ridicule that, I must say, they deserved. Even so, the ensuing hubbub was mercifully short-lived. Thus, while Morrison's arguments in favor of Clinton's "blackness" were ill-considered indeed, they can hardly be blamed for the idea's persistence.

Eleven months after Morrison's essay appeared, Clinton himself resurrected the concept. He told attendees at the Congressional Black Caucus's annual awards dinner that he recently had met with comedian Chris Tucker, who was developing a film project about the nation's first black president. "I didn't have the heart to tell him that I've already taken the position," Clinton said. News reports noted that audience members, including various black congressmen, "cracked up."

I hope they were laughing to keep from crying. As public officials with agendas to pursue and constituents to placate, maybe they had good reason to soothe the presidential ego. Perhaps Paul Laurence Dunbar was thinking of black officeholders when he fashioned these lines in "We Wear the Mask": "This debt we pay to human guile;/With torn and bleeding hearts we smile,/And mouth with myriad subtleties."

Like the vengeful undead in a seedy horror movie, the specter of "Black Bill" continues to rise and stretch forth its creepy talons. On February 15 -- some 17 months after the black caucus dinner -- a Washington Post story about Clinton's planned move to Harlem quoted a black flower vendor's enthusiastic endorsement of the ex-president. "Oh yeah!" the vendor exclaimed. "He's my MAN! He IS black. He is black. His attitude, his body language, he is a black man. He walks gracefully. He talks gracefully. He would be my brother."

It is time to put this putrid idea to rest, bury it deep in the compost pile where it belongs. Let me make this perfectly clear: Clinton is not black. He does not "talk" black, whatever on Earth that means. He does not "walk" black either. I'm sure I'm not the only black man in America who finds such woefully distorted logic insulting and distasteful. Surely others can't help but see the painful irony of Clinton being celebrated as a hero in a legendary community where giants once walked the streets. Harlem helped nurture the talents of men like W.E.B. Du Bois, Paul Robeson, Langston Hughes and James Weldon Johnson, and when we carelessly tolerate the connection of Bill Clinton to their storied legacy we sully the names of immortals.

Are black men so hungry for modern heroes that we eagerly exchange brotherhood for Clinton's occasional teary-eyed assurance that he feels our pain? And are such gestures, regardless of their sincerity, sufficient to overcome Clinton's many, repeated moral failings? What have black men to gain by attaching our loyalty so firmly to a man whose place in history grows shakier by the minute?

I've never understood many blacks' irrational exuberance where Clinton was concerned. I didn't trust him from the get-go, smelled something rotten during his first successful presidential campaign, when he attempted to reassure moderate-leaning whites by making a symbolic punching bag out of Sister Souljah, a marginal hip-hop performer with minimal influence. My suspicion deepened when he turned his back on Haitian refugees moments after moving into the White House. These and other slick maneuverings linger in my memory whenever anyone, even jokingly, associates the content of the former president's character with the color of my skin.

I'd never thought I'd wish that blackness was an exclusive club with its own set of unique privileges but lately I've recognized the value of elite memberships. I've seen how belonging to the Senate club afforded John Ashcroft relatively painless access to the top job at the Justice Department. I've seen how Clinton's stellar resumé affords him the opportunity to practice his putting in exclusive country clubs in places like Little Rock and Miami.

With that in mind, President Clinton and anyone else considering joining the fraternity of black men should be aware that, as with any other elite group, a certain amount of dues-paying is in order. Maybe the former leader of the free world has already successfully negotiated our well-worn rites of passage. Maybe he has been frequently mistaken for a shoplifter, mugger, drug courier or carjacker. Maybe he's been followed around stores for no apparent reason. Maybe he has been pleasantly surprised when a cab responds promptly to his outstretched hand. One thing he certainly has not done is pursue his livelihood as most African-American men have done, with grace, dedication and integrity, far beyond the spotlight.

Mr. President, I've worked with black men. I've known black men. Some black men have been friends of mine. And you, sir, are no black man.

Jabari Asim is a senior editor of Washington Post World and editor of "Not Guilty: Twelve Black Men on Life, Law and Justice," to be published in the fall.