Now this is Rich: They include a Watergate felon, a Cuban exile terrorist and a Pakistani heroin smuggler. But where was the outrage then? 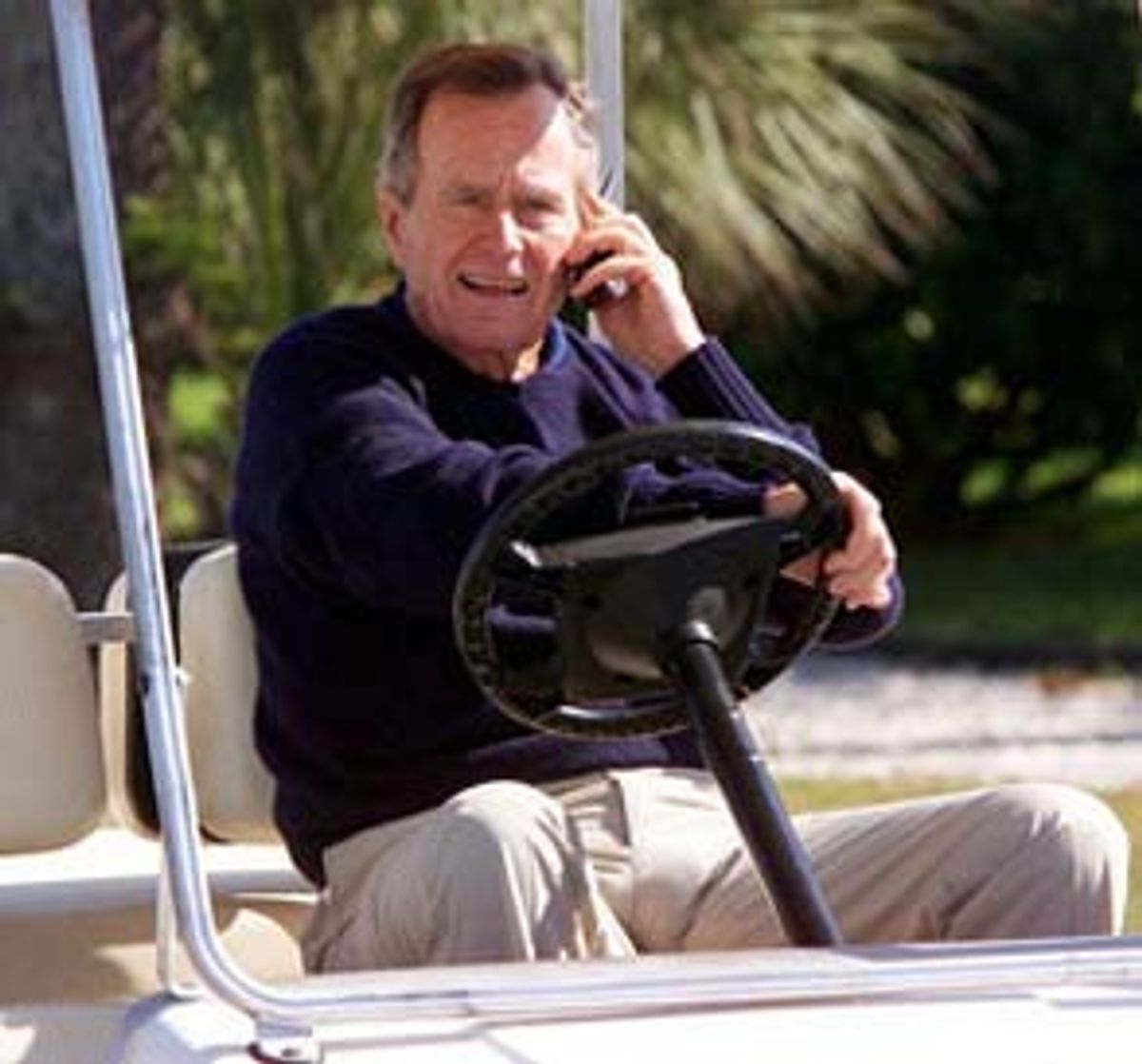 Hearing all the indignant noise about the Clinton pardons, the average citizen might understandably think that the granting of presidential clemency had never been tainted by campaign contributions, political connections or insider access. That mistaken perception, promoted by lazy journalists and partisan pundits, is being exploited by Republicans on Capitol Hill (who are never, ever influenced by rich donors).

The truth -- as anyone who glances back into the history of the first Bush administration can quickly learn -- is that Clinton hasn't done anything that his predecessor didn't do first and, in some cases, worse.

The widely and justly criticized pardons of Caspar Weinberger and other Iran-Contra defendants by George Herbert Walker Bush should have been just the beginning of that story. Yet, for reasons best known to the incorruptible watchdogs of the Washington press corps, Poppy's self-interested mercy upon Weinberger instigated no searching examination of the other pardons granted by the departing president. Indeed, the final dozen pardons given by Bush -- including the unexplained release of a Pakistani heroin trafficker -- received virtually no coverage at all.

The elder Bush delivered a few highly questionable pardons well before his last days in office. The very first of his presidency went to Armand Hammer, the legendary oilman best known for his relationships with Soviet leaders dating back to Lenin. In an investigation that grew out of Watergate, Hammer had pleaded guilty in 1975 to laundering $54,000 in illicit contributions to Nixon's reelection war chest. By the summer of 1989, when Bush gave Hammer what he wanted, the aging chief of Occidental Petroleum had been pestering government officials on his own behalf for several years.

Considering his original offense, it was ironic that Hammer won what he called the "vindication" of a presidential pardon only months after he poured well over $100,000 into Republican Party coffers, and another $100,000 into the accounts of the Bush-Quayle Inaugural committee. (In author Edward Jay Epstein's excellent biography of the oilman, there is a photograph of Hammer, his girlfriend and President Bush together at the White House in April 1990. Such visits were perks for members of Bush's "Team 100," as the GOP's most generous donors were known.)

At the time, Hammer's pardon made news, partly because his request had been turned down by President Reagan several months earlier. But nobody seemed to notice the nexus between the oilman's generosity to Bush and the new president's mercy upon Hammer.

The only hint of Hammer's influence-buying came from former Watergate prosecutor Henry Ruth, who wasn't consulted by the White House before Hammer's pardon was granted. "My view of the pardon process is that it should be given only in extraordinary circumstances, and I haven't heard of any" in Hammer's case, Ruth told the Los Angeles Times. Ruth thought the undeserved favor had been given only because Hammer was "rich" and "powerful."

Another intriguing fact went almost unnoticed back then, too. Hammer's team of attorneys included not only a close friend of Attorney General Richard Thornburgh, but also a very close friend of Bush's new White House counsel C. Boyden Gray, whose job included passing on pardon requests to the president. The Gray pal hired to help Hammer was a former Reagan Justice Department official named Theodore B. Olson. Now that Olson has been nominated as Bush's solicitor general, perhaps he will offer insights on the history of presidential pardons during his confirmation hearings before the Senate Judiciary Committee. Surely Olson would testify that campaign contributions and insider influence should have nothing to do with the process.

An even more dubious case than Hammer's also reached Bush's desk during the first year of his presidency. In 1989, prominent Cuban-Americans in Florida began agitating for the release of Orlando Bosch, a notorious anti-Castro terrorist then serving a prison term for entering the United States illegally. American intelligence and law enforcement authorities firmly believed that Bosch was responsible for far worse actions, including the 1976 explosion that brought down a Cuban airliner, killing all 76 civilians aboard, although Venezuelan prosecutors had failed to convict him of that terrible crime. There was certainly no question that Bosch was an advocate of terror and had been involved in numerous bombings.

The Justice Department wanted to deport Bosch because, according to the FBI, he had "repeatedly expressed and demonstrated a willingness to cause indiscriminate injury and death." Freeing Bosch at a time when Washington was condemning terrorism abroad would obviously be hard to explain -- had someone asked.

But Miami's leading Republican contributors and politicians persistently lobbied Bush to free Bosch, insisting that the former pediatrician was really a noble freedom fighter. And in 1990, when Bosch was eventually released and permitted to reside in Florida under an extraordinary deal with the Bush Justice Department, much of the credit went to the alleged mass murderer's best-connected White House lobbyist -- a budding local politician named Jeb Bush. The Bush son who would be elected governor of Florida eight years later had, by 1990, already become wealthy in real estate and other deals with the same Cuban exile businessmen who wanted Bosch to be freed. Among Jeb's business partners active in the Cuban-American National Foundation, the institutional advocate for Bosch, was one Armando Codina, also a regular GOP donor and activist. (Codina, however, tells Salon that he neither supported the release of Bosch, nor ever lobbied his business partner, Bush, on the issue.) According to the administration's spokesmen, however, all those personal and financial ties were just a set of happy coincidences. Anyway, nobody in the mainstream media or on Capitol Hill got upset because the president's son had opened prison doors for an unrepentant terrorist.

Flash forward to the very end of Poppy's presidency, a few weeks after his Christmas Eve 1992 pardons of Weinberger and the other Iran-Contra defendants. On Jan. 18, 1993, the soon-to-be-former president signed a clemency order freeing Aslam Adam from Butner federal prison in North Carolina. A Pakistani national, Adam had by then served eight years of a 55-year sentence for smuggling $1.5 million worth of heroin into the United States. He wouldn't have been eligible for parole for another two years.

Stunning as the commutation of Adam's sentence was, even more bewildering was the lack of press interest or congressional concern about his case. It was mentioned in a single paragraph on an inside page of the Washington Post; the New York Times didn't cover it at all; and nobody except the Charlotte Observer asked why. There was no further investigation until 1994, when Eric Nadler examined the Adam matter for Rolling Stone. All that Nadler could establish for certain was that Sen. Jesse Helms, R-N.C., a stalwart friend of the Pakistani military regime and its domestic lobbyists, had interceded on Adam's behalf with the Justice Department and prison officials.

It was worth mentioning, of course, that Bush, a former CIA director, may have had his own occult foreign policy or national security reasons for releasing Adam -- but none ever came to light. And no one in Congress or the media ever demanded that Bush explain why he had freed a narcotics trafficker. Adam was sent home to Karachi, where his mother reportedly exclaimed, "God bless Bush! God bless Bush!"

Aside from Weinberger and company, Bush's few pardons attracted little notice, but several of those he gave were as questionable as the most controversial Clinton pardons: a Watergate felon who donated huge amounts of money to the president and hired well-connected GOP lawyers; a Cuban exile terrorist whose case was advocated by the president's son and the son's business partners; and a Pakistani heroin dealer befriended by Jesse Helms.

So if and when Bill Clinton goes up to the Hill to testify on the subject of pardons, then perhaps his predecessor should be invited to discuss the same sore topic. The political influence of money and access is always troubling -- but that influence isn't much different in the pardon process now than when George H.W. Bush exercised those powers. The difference is that today, for reasons that have nothing to do with morality, we are suddenly paying attention.

This story was modified since its original publication.