Sean Penn! Crispin Glover! A drag Olivia Newton-John! The strange saga of how "The Beaver Trilogy" was made is even weirder than the film itself. 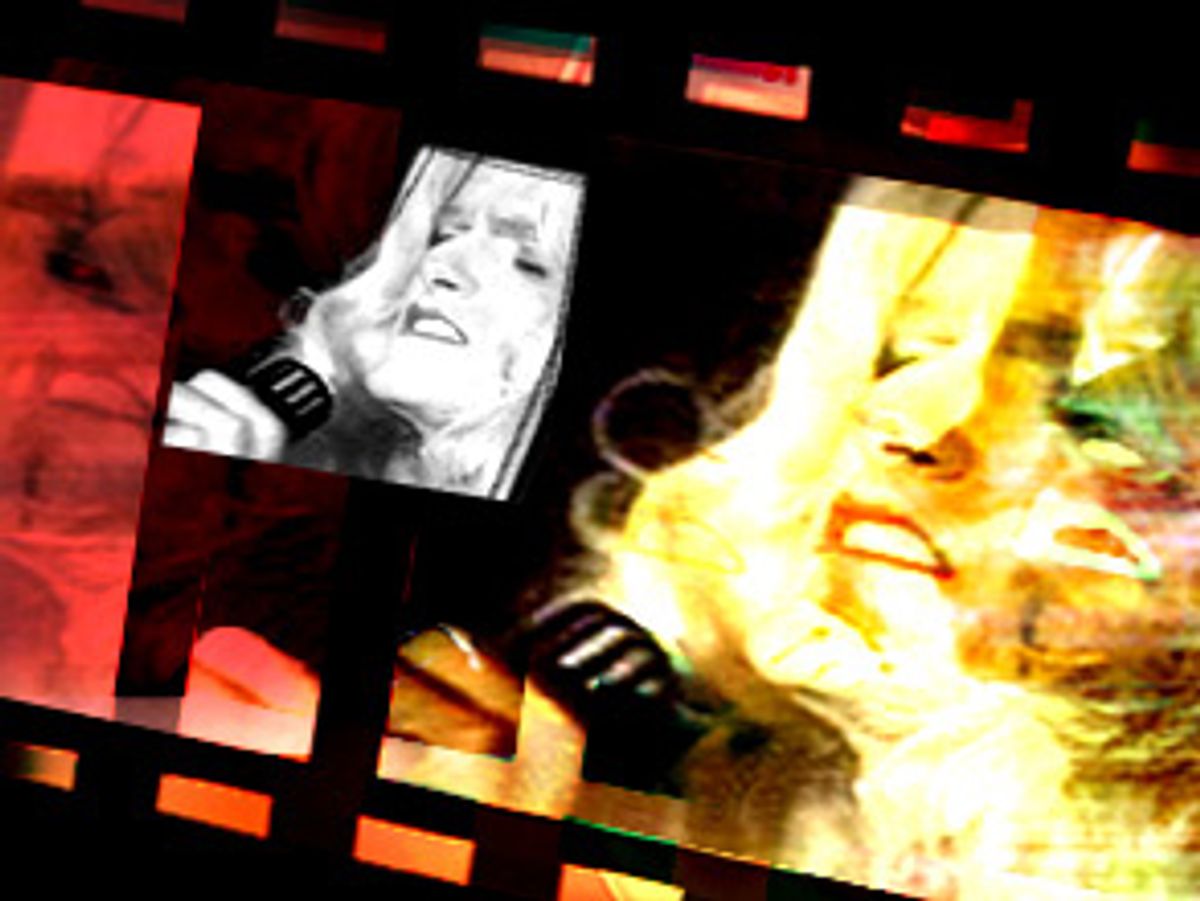 A man stands alone on the stage of a high school auditorium. He wears full motorcycle leathers and a vivacious blond wig. In a wispy, girlish falsetto, he edges through the lyrics to Olivia Newton-John's "Please Don't Keep Me Waiting."

The man's face is a mask of quiet resignation, guarding secrets. His eyes blaze with something resembling glory, then slowly well up with a mounting panic. He looks like he's about to cry.

The scene repeats three times in "The Beaver Trilogy" -- one of the oddest films to premiere at this year's Sundance Film Festival. The first singing man, videotaped in 1979, is an unknown performer identified only as Groovin' Gary. Later, Gary is played by Sean Penn in 1981, moments before "Fast Times at Ridgemont High," and then, finally in 1984, by Crispin Glover, before he starred in "Back to the Future."

Together, the portraits in "The Beaver Trilogy" don't tell a traditional story as much as they complete a character study of its star, "Groovin' Gary," aka the Beaver Kid. Spanning history and farce, inhabiting the gray zone where the ridiculous becomes the sublime, director Trent Harris' accidental feature is a delicate hybrid of fiction, cinéma vérité and medical X-ray. The only thing stranger than the film itself is the story of how it got made, and why, 20 years later, a broad audience might actually get to see it.

In 1979, 25-year-old Trent Harris, an assistant cameraman at a Salt Lake City TV station, first encountered the relatively new technology of video. Picking up the station's brand-new video camera for the first time, he wandered out into the parking lot to figure out how it worked. Zooming in on a random figure at the far end of the lot, he adjusted focus as the figure -- drawn to him by the presence of the camera -- approached and struck up a conversation.

The man was Groovin' Gary (his real name has never been released), a recent high school graduate and would-be entertainer. That morning, he'd driven to Salt Lake City from Beaver, Utah, in his '67 Chevy Impala with the hope of interesting the local TV station in a talent show he had organized. His intentions were a little transparent because the show was principally a showcase for his Olivia Newton-John drag act. In the parking lot, Gary offered a sneak preview: He sang, danced, joked, did impersonations -- anything he could think of to hold the camera.

Charmed by his moxie, if not exactly his talent, Harris drove to Beaver several weeks later to film the show. First he met Gary at the local mortuary, where he taped the staff cosmetician applying the transforming makeup necessary for Gary's act. Gary, while carefully brushing out his blond wig or receiving applications of lipstick and mascara, repeatedly explained that he just does the act "for a kick."

"I still enjoy being a man," says the Matthew McConaughey lookalike, doth protesting too much. "I'm a man, not a girl."

He swaggers off backstage like a linebacker in showgirl leathers.

Gary's rendition of Newton-John's "Please Don't Keep Me Waiting" -- sung in a reedy falsetto with an "evening, Guv'nor" fake Cockney accent -- is excruciatingly bad. In front of a largely silent and somewhat mystified audience, the weight of this realization commingles with performance anxiety and possibly some deeper strain of sexual ambiguity or humiliation. He finishes practically in tears.

Gary called Harris a few days later and haltingly requested that the tape not be aired -- as if it was actually a possibility. Some time after that, either out of a sense of impending shame or for reasons more complicated, Gary tried unsuccessfully to shoot himself.

Harris quit the station, packed up his old car and moved to L.A. He enrolled in the American Film Institute with the express purpose of making a short film. He wrote a script and looked for actors to cast as Gary.

The immediate result, shot on video in 1981, was a 30-minute improv exercise called "The Beaver Kid." The short film starred a painfully young Sean Penn in the role of Gary. Penn would shortly play Jeff Spicoli in "Fast Times at Ridgemont High," and seemingly incorporate wholesale Gary's signature halting laugh.

"We had all kinds of people read for the part," recalls Harris today, well into his 40s and gracefully turning gray. "Nick Cage, Eric Stoltz, Anthony Edwards. The day that [Penn] came, he hadn't had time to really read the script or anything, so he said, 'Well, I'll just be that character.' We wandered around the city, and he played my cousin from Beaver, Utah. I introduced him to my friends and whatnot, and he just played that character. It was funny because a year later, when he became a big shot, some of my friends came up to me and said, 'Hey, your cousin is really doing well for himself.'"

On the strength of that half-hour videotape, Harris was then able to mount a 30-minute 16mm film in 1984 called "The Orkly Kid," named for his own hometown of Orkly, Idaho. When Sean Penn begged off, citing "girlfriend problems," Harris cast a still relatively unknown Crispin Glover. For the third time now, Harris re-created the original encounter in the parking lot, the rendezvous in the funeral home and the onstage performance, with a brief coda dramatizing Gary's subsequent letters and suicide attempt. (Gary's shy demeanor, nervous laughter and wide-eyed wonder found its way into Glover's Marty McFly character in "Back to the Future," filmed later that year.)

Harris spent the next eight years in Hollywood, where he sold several scripts and managed to direct one feature film in 1992, the cult movie "Rubin and Ed," starring Crispin Glover and Howard Hesseman, a buddy film about a trek into the desert to bury a pet cat. The movie bombed and Harris fled to Salt Lake City.

Back in Utah, he managed to make one more feature, "Plan 10 From Outer Space." Despite the title, the movie is not an Ed Wood sendup, but rather an intermittently comic thriller predicated on Mormon theology. For no easily discernible reason, the movie features a 10-minute interlude with cult actress Karen Black as the angel Nihor, singing a Mormon ode to the planet Kolab in a faux-Wagnerian Yoko Ono falsetto.

Two years ago, Harris dug out all three "Beaver" films to play in sequence for some friends. Individually, the films show the evolution of a creative idea over the better part of a decade. But together as a trilogy, Harris realized, the films reveal different facets of the same person: Gary himself is self-effacing and sweetly driven; the Sean Penn version is a walking contradiction with a pronounced undercurrent of sexual hostility; and the Crispin Glover take is imbued with his own curdled narcissism and damaged mania.

Until that first showing of all three films, they seemed like curiosities to Harris. Now, suddenly -- completely by accident -- they looked like something else: a feature film.

After that, the "Trilogy" took on a new life. It ended up in a San Francisco gallery exhibition titled "Outlaws and Obsessions," and from there played in the video adjunct of the New York Film Festival. Next, it went on to the European festival circuit. The "Trilogy" is now being repped by Strand Releasing, which is talking with several prospective distributors, although music rights remain a problem.

In the final credits of "The Beaver Trilogy," there is a special thanks to Melvin Dummar, whose band Melvin and the Dreamers did fundraising for the project. Dummar, some will remember, was the Utah service station owner who came into possession of what he claimed was billionaire Howard Hughes' posthumous will. According to the document, Hughes was leaving millions to Dummar, who had given him a ride once in the desert outside Las Vegas. Dummar's claim was eventually discredited, and the courts disallowed his windfall. Years later again, in the movie "Melvin and Howard," speculatively based on his story, Dummar himself appeared on-screen as a short-order cook at a bus station. For better or worse, the scene represented his 15 minutes of fame.

Groovin' Gary surprised everyone when he showed up looking for his own 15 minutes at the first Sundance screening of "The Beaver Trilogy."

"That was extraordinary," Harris says. "I'd tried to contact him and hadn't had any luck. And finally we'd gotten a message through -- this is like a day before the screening -- that it was going to be at Sundance, that he didn't have to come, that we would gladly send him a tape, whatever he wanted.

"I hadn't seen him in 20 years. He never knew about the Sean Penn thing, about the Crispin Glover thing. I didn't know whether he was going to show up at the screening or not, so I stood outside waiting for him. But what he'd done is got there early, come in on his own and hid up in the balcony and watched the thing.

After the screening, and after a Q&A session, several people in the audience rushed the stage to talk with Harris -- including Gary. "You probably don't remember me ..." Harris remembers him saying.

"I just looked at him, and I gave him this big hug," says Harris. "We both started hyperventilating so much we couldn't talk.

"I said, 'C'mon, let's duck out this side door.'" The two went outside, followed by a small group that asked Gary for pictures and autographs.

"I was really concerned about springing this on him in front of 1,400 people," says Harris. "But in fact I think it turned out to be the best possible thing. Because people just loved him. I think now, looking back, that was much better than just sending him a tape and letting him look at it."

It doesn't seem lost on Harris that, just like with Groovin' Gary, "The Beaver Trilogy" story represents the predominant creative thread in his life. Most recently, he's been filming a series of self-financed half-hour documentaries, titled "The Wild Goose Chronicles," about subjects such as a former Khmer Rouge soldier in Cambodia who removes land mines and ritual horseback fights in West Zumba that happen the same time that giant multi-headed sea worms wash up on the beach.

Still, snaking between and through his other endeavors, "The Beaver Trilogy" remains Harris's most consistent body of work, as well as a preoccupation that he's returned to for over two decades. Out of a chance encounter in a parking lot sometime late in the Carter administration, somehow miraculously captured live on tape, their lives have remained invisibly intertwined until finally, in an act of dramatic closure worthy of classical drama, their reunion brought both closer to what each, in his own way, wanted all along: a little piece of immortality.

"He looked the same. Still drives that same car, a '67 Chevy Impala with red fur on the dashboard. He's a truck driver, he's got a family, doing well. He was horrified and flabbergasted and proud and embarrassed all at once. He said, 'I'm real supportive of this,' and 'I'm so happy for you,' and 'I'm so glad all of this is happening,' and 'Boy, isn't this a surprise?' and 'I had no idea.'"

Since then, Harris has asked Gary to do some publicity for the film. Gary wants to think about it. "I don't think he especially wants to promote this down around the neighborhood he lives in, because they ain't gonna get it," says Harris. "They'll just make life miserable for him ... I don't know how he feels exactly."

That last one's easy. He feels like a star.

Paul Cullum is a writer living in Los Angeles.