"The Widow of St. Pierre"

After her star turn in "Chocolat," Juliette Binoche dulls this costume melodrama. 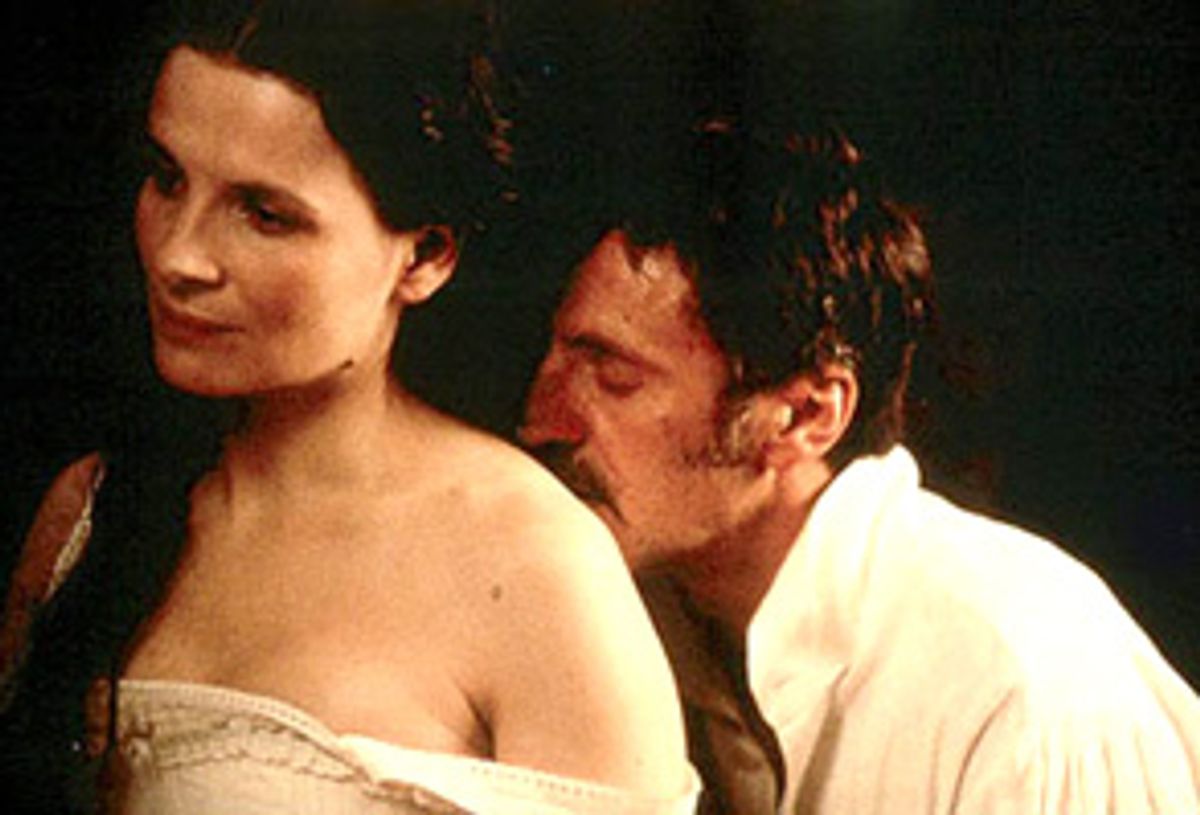 There's an anomaly in Juliette Binoche's acting that doesn't apply to any other actor I can recall: The more intense her performance, the less vivid her presence. Over the past year and a half I've seen Binoche as an artist going blind in Leos Carax's "The Lovers on the Bridge" (made in 1991 but not seen here until 1999), a violinist involved with her lover's half-brother in Andre Techine's "Alice et Martin" and now as the wife of a French military commander who tries to reform a condemned murderer in Patrice Leconte's "The Widow of Saint-Pierre."

There isn't a moment in the film where you catch Binoche out of character. She's completely submerged in the role of Madame La. But a few days after seeing it, I have to say that nothing Binoche does in the film (or in the Carax or the Techine) has stayed in my memory as clearly as her performance in "Chocolat." That role, a movie star turn in a well-made trifle of a picture, doesn't require nearly as much acting as she's called upon to do here. In "Chocolat," Binoche's charisma is even more important to the part than her acting. But everything she does in it is distinct: the way she finds the appropriate tone for each customer as she doles out goodies; the flirtatious way she smiles at Johnny Depp or cuddles against him in a boat on a moonlit river; the desperation as she claws at the earth when she believes her little daughter has been killed.

It's easy to assume that what Binoche does in "Chocolat" is simply being a movie star and that what she does when working for Patrice Leconte or Andre Techine or Krzysztof Kieslowski (for whom she starred in "Blue") is, as Jon Lovitz's Master Thespian would say, "Acting!" That's partly true. It's also the whole problem. Binoche doesn't have a lot of star vanity. She'll play crazy or neurotic or frazzled without making it feel as if she's slumming. But her performances in those films, lived in and immersed in the character's reality, are almost always unaccountably opaque.

All I can recall of her performance in Leos Carax's "Bad Blood" is a brief black-and-white interlude where she's filmed as if she were a silent screen goddess. The camera adores her. Glamour is often talked of as if it puts performers beyond our reach, but Binoche is at her most accessible when she's at her most glamorous. She needs glamour to seem fully alive on screen. The glamour that art-house audiences respond to in Binoche is of another kind, the contemporary version of chic Continental angst, what actress Monica Vitti used to provide those early 1960s audiences with in Michelangelo Antonioni's films, like "L' Eclisse" "La Notte" and "L' Avventura. But it cancels Binoche out. Too much of the time she's so submerged in character that trying to figure out what's going on inside the people she plays is like trying to make out a message from someone trapped in a coal mine.

That's true of all three principals in "The Widow of Saint-Pierre." Leconte works with intelligence and craft and the movie should have been a satisfying costume melodrama. It's not badly made, but it's a drag. Leconte's virtues can't overcome the plodding glumness that prevails. Halfway through, I began to feel the movie was Leconte's penance for the frivolous high spirits and high style of his last film, the wonderful "Girl on the Bridge." He doesn't exactly drain the juice from the story, but the toniness of his approach dries it out.

The cinematographer, Eduardo Serra, was responsible for one of the most ravishing looking movies of the last 20 years, Iain Softley's marvelous film of "The Wings of the Dove." The earth and mud tones are certainly what this story calls for, but, like Leconte's direction, there's no pleasure in it. And as the film goes on, it's harder to get over the sense that something is missing -- or being ignored.

The movie is set in 1850 on a island belonging to France just off the coast of Newfoundland. A former fishing boat captain is murdered by two men, one of whom used to work under him. When that man Auguste (Emir Kusturica, the director of "Underground" and "Black Cat, White Cat," in his acting debut) is sentenced to death, it becomes the responsibility of the island's military captain (Daniel Auteuil) to imprison him until a guillotine can be shipped to the island. At his wife's behest, the Captain offers Auguste the chance to work as her gardener. Soon Auguste is traveling freely with Madame La over the island, doing chores for others (even, in his most heroic moment, saving the town's tavern) and becoming an accepted part of the island's life. That doesn't sit well with the island's Governor (Michel Duchaussoy), who is determined to carry out French justice by making sure the execution proceeds.

If it feels like something has been left out of that synopsis, it's no more than what's left out of the film itself. Nothing in the way the characters behave ever makes complete sense. Leconte is a little like a defense attorney trying to put the best face on the proceedings. But you can never get past the suspicion that he's not telling us the whole story. Becoming Madame La's gardener offers Auguste the chance not to be cooped up in his cell. It even brings him in contact with a young widowed mother whom he impregnates. But Auguste doesn't appear to have a drop of resentment at becoming Madame La's project, even though his whole treatment is grotesque, unthinking. When he shows up at the military barracks that also houses the Captain and Madame La, he's invited into their living quarters while she offers him tea and food and tells him to make himself at home, and nothing in Leconte's direction, in Claude Faraldo's script or in the way the scene is played hints at the appalling condescension of their behavior. They're almost a parody of liberal do-gooders who expect the recipients of their largesse to behave like appreciative little puppy dogs.

The movie might have been made by Madame La. Neither she nor it realize that there's something cruel about reforming a man who's been condemned to death. It doesn't serve any purpose except making Madame La feel more virtuous. The movie can't bring itself to acknowledge that, and it can't bring itself to delve into her motivation, which appears to be mostly sexual. She's in such a twitter when the captain brings Auguste into their home that she breaks the teapot. And later, when she catches Auguste in bed with the young widow he eventually marries, the tight expression on her face appears to be more jealousy than disapproval.

The movie does acknowledge the sexual hold Madame La has on her husband. His willingness to make her happy is why he goes along with her scheme, why he sticks by her when the powers that be on the island make their disapproval known. But Madame La's speeches about redemption, her conviction that a man can be a wild animal one day and civilized the next (a foolish idea, but that's exactly how the movie presents Auguste, who can apparently go from killing a man in a drunken rage to becoming the docile dear of the community), don't feel nearly as convincing an explanation for her actions as the one the movie scrupulously ignores: that her social experiment is no more than her way of testing her husband's devotion to her.

"The Widow of Saint-Pierre" is, in essence, the story of a tease who masquerades as a paragon and destroys two men in the process of exercising her sexual power. Watching it, I kept thinking of a similar but far superior film: Gillian Armstrong's 1984 "Mrs. Soffel," starring Diane Keaton as a prison warden's wife who falls in love with a condemned man (Mel Gibson) and helps him escape. "Mrs. Soffel" is an all-but unknown and near-great American movie, with knockout performances from Gibson and Keaton, a sort of Victorian fever dream that admires its heroine's daring and reckless passion but doesn't shy away from the madness in it. It doesn't turn Gibson's condemned man into a sacrificial sweet Jesus, either. Armstrong calls her characters to account for their actions. Leconte does his best to ignore the foolishness in the way that both the captain and Madame La flout social conventions in the face of the people who hold power over them. And since the captain is the one in the official position, it's inevitable that he, rather than his wife, is the one who's going to pay the price. If it hadn't already been used last fall, the better title for the movie would be "Whipped."

The best scenes here belong to Daniel Auteuil, whose performance works to shade in the layers the film has omitted. Whatever Auteuil (who looks rather like Robert Morse's harried brother) has to express from film to film, he seems to do it with his slightly wild stare and the slightly disapproving set of his mouth. He has the look of a man whom the world is always about to disappoint. In some of his roles, he's just learned to live with the knowledge better. In terms of sheer technique and ease in front of the camera, Auteuil is one of the most confident screen actors around. He's compact in build and movement, and he's as immersed as Binoche is but with an almost startlingly direct means of communicating his character's inner workings to the audiences.

Fitting for an actor so in command of himself, the man he's playing in "The Widow of Saint-Pierre" is an assured one, but one whose confidence derives almost entirely from his desire to please his wife. Once he knows that what he's done has won her approval, he can stay any course. In "The Widow of Saint-Pierre" that makes him the sacrificial goose. What makes Auteuil so affecting here is the duality you see in those big eyes, his unwavering refusal to cave in to the political powers who mean to see Auguste guillotined, and the fear that creeps in alongside it, the fear of knowing what his decision will cost him. In the final scenes, Auteuil really hits his stride. The captain knows he has gained his wife's eternal devotion and the knowledge transports him to that place of triumphant romanticism where (as in Frangois Truffaut's "The Story of Adele H.") madness is the same thing as glory. Would that the movie were less interested in playing nice with its characters and more willing to journey to that reckless place with Auteuil. He's exactly what every Gothic Victorian melodrama needs and what this is one is so sorely lacking: the madwoman heroine.