As long as pretty rules, ugly will be the choice of fashionable dissidents. 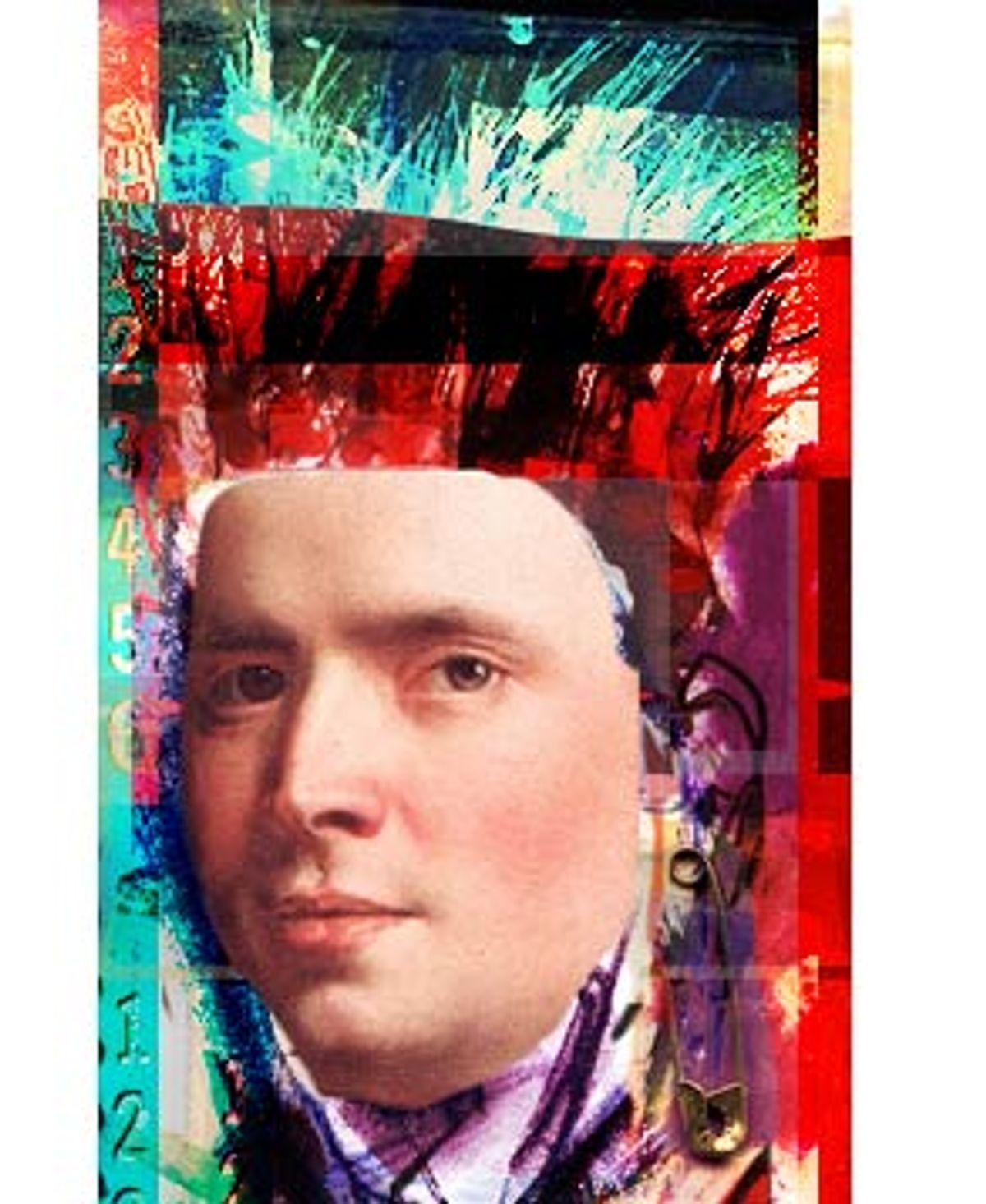 When I was 14 years old, I had a boyfriend with green hair. The year was 1987, I lived in Boise, Idaho, and those of us with green hair and purple hair and black jeans and leather jackets (mostly from pawnshops) hung out at the Brass Lamp pizza parlor and went to all-ages gigs and watched "Sid and Nancy" and generally behaved very much as if we were in England in 1977, the year punk broke -- a year during which, it must be said, all of us were under 5 years old.

I am 27 now, and my boyfriend, who is 30, has orange hair. Actually, last weekend my first boyfriend and my current boyfriend hooked up to take me to IKEA. My first boyfriend now has short brown hair in a crew cut but he still wears a uniform that (mostly) wouldn't be out of place in working boy culture in '70s England -- creepers, black leather boots, black leather jeans, pants and jackets by Dickies and Carharrt and Ben Davis, plaid shirts with sleeves rolled up to show his tattoos. (At his wedding last fall, he wore a vintage tuxedo he altered himself; his wife wore a pink corset and a denim skirt with a train and magenta hair.)

My first boyfriend is something of a poster boy for the blue-collar working class: He is the son of a construction worker, was born and raised in Boise, dropped out of college after one semester and works as a roofer. My current boyfriend is more black turtleneck: He is the son of a psychoanalyst and a novelist, was born in Manhattan, went to private schools, graduated from Yale and works as a novelist.

In the 13 years between my first boyfriend and my current boyfriend, I dated boys with shaved heads, boys in bands, film student boys, college boys, high school dropout boys, Idaho boys, East Coast boys, private school boys and public school boys. They all were, more or less, tall and thin, and more left than center in their politics.

And they all, more or less, had an aesthetic rooted in a movement that started when all of us were too young to buy our own CDs, a movement, in fact, that predates CDs altogether. The point here is not that I date according to type. I do but, like most things, my type of boy has changed from the time I was a teenager in Idaho to a private college student in Connecticut to a Web site editor in San Francisco.

The point is that it's deeply strange that I -- and women 15 years older than me and 10 years younger than me -- could potentially spend 25 years (and counting) of our dating lives with boys with hair spiked with gel (or egg whites, Elmer's glue, toothpaste) and dyed with Manic Panic (or Kool-Aid or Clorox); dressed in spiked leather belts (and jackets and jeans and boots and collars), with pierced ears (eyes, lips, navels, tongues and dicks).

In fact, the biggest sartorial difference between the boys I knew at 14 and the one I knew at 25 is that, by 25, they weren't so punk rawk that they had to use the egg whites and the Kool-Aid, and were willing to stop stealing their grooming aids from the drugstore and their mothers' kitchens and instead pay a top San Francisco stylist $100 to get their hair the exact shade of orangey-red that their well-formed image of themselves demands.

Punk is, for lack of a better word, a fashion classic. Its staying power gives it a great deal in common with its opposite -- khakis and Oxford cloth shirts and the little black dress and the navy blue day suit. If punk were a woman, you would say it has good bones. And, like beauty itself, this fashion fact of life has been both a blessing and a curse. Although the genesis of punk has incredibly specific historical and political roots -- and disciples of every subsequent punk offshoot will explain to you why exactly their particular subset has the most legitimate claim to being old-school punk -- the punk aesthetic was such a perfect visual cocktail of sex and politics and rebellion that it has proven itself maddeningly capable of infinite adaptations, regenerations and bastardizations.

Punk was -- originally -- working-class boy fashion, and its predecessors would have been rude boys, rockers, rockabillies and mods, but not teddy boys. There is definitely such a thing as being more old-school punk, and there are many people (my ex-boyfriend and my brother, who is, by the way, five years younger than me) who insist that nothing else really counts. I know this history and you probably do too, and if you don't, there are more than two decades' worth of books, low-budget films and Hollywood movies, and 'zines and graduate theses that would be happy to explain this to you, although, at this point, most of them will disagree with one another.

But I have never been anything but a bastard child of punk. I'm too young to be anything else, but old enough to see new varieties I don't recognize. By the time I was a teenager, punk was 10 years into its perpetual permutations. There were skins, sharps, Goths, gutterpunks, straight-edge punks, New Wavers, dyke punks, art school punks and old-school working-class punks, and, of course, poseurs, who were comprised of anyone who did an unconvincing interpretation of the punk that you happened to be practicing, or did a convincing interpretation, but had too much money to count, or had the wrong politics, or else belonged to one of the subcategories that you did not recognize as being real punk.

Now, I am an aesthetic slut, and while I know people who, in their late 20s and 30s, still base their identity on being old school, I am not one of them. I am not even a poseur. By the time I got into punk, it had become so diluted that it was a magnet for outsiders of every persuasion: There were the prole agitators, the gay kids, the biracial kids, the intellectuals, the Satanists -- hell, even the Democrats were outside the mainstream in my high school.

In the not-so-happening northwest corridor -- which included Salt Lake City, Seattle and Boise -- we loved punk. We were stuck with a lot of Mormons and Republicans and jocks and rednecks, and nothing said fuck you quite like a Dead Kennedys T-shirt and a pink Mohawk.

When I got out of punk, some of the people I still liked had become rockabillies and swingers and the ones I didn't had become racists and I was getting shit for being too "college." Meanwhile, my brother was expressing his version of working-class solidarity by refusing to go to college and working as a janitor and living in my mother's basement. (Yes, he did recognize that he was also coasting on his middle-class privilege, but he somehow believed that refusing to exercise it made him more like his friends who could not rely on their parents for college tuition.)

So, I don't really care who is a real punk and whether or not Jello Biafra (or Johnny Rotten or Malcolm McLaren or Vivienne Westwood or Green Day) is a sellout or whether boys in the Financial District with green hair or teens who buy their hair dye at Hot Topic piss you off. They piss me off too, but so do the politics of some of my still-punk racist friends. In fact, I'm going to say something that my friend who is a union organizer for dockworkers would, quite literally, kill me for: Fuck politics, let's talk about the clothes.

In the three decades that you might have dressed as a punk, you could instead have dressed in the costume of a disco diva, a hippie, a prep, a metalhead, a SoHo gypsy or any number of other styles that have died out only to be regurgitated about five to 10 years after they are really, truly dead.

Punk, like most any other street subculture, has been periodically raided by couture, starting with collections of the late '70s that featured, among other things, vastly expensive, intentionally shredded garments embroidered with gold lamé "vomit" stains worn by sneering runway models with (fake) safety pins through their cheeks. Given the fact that punk had its roots in working-class culture and defined itself as being in opposition to all things couture, this should have killed it. But it didn't.

For those on the couture calendar, this fashion season, like many before it, brings a recycled pastiche of decades past: You can find the '40s (in the form of tweed suits and classic bobs), more '70s disco classics (in wraparound sweaters, dangling belts, Lurex and polyester) and the '80s (capri pants, Izod polos, pastels). But it's also a very big year for recycled punk: Everyone from Gucci to the Gap has some interpretation of the classic black (and burgundy and pink and faux alligator) leather jean; there are socialites in fishnet tights, pink-haired Gucci models and vintage rock T-shirts in Vogue. In the boutique around the corner from me, there are camo belts and dog tags and a version of the classic padlock necklace, this one encrusted in Austrian crystals that Sid Vicious would have most likely removed with his teeth.

Yes, I know. Disco divas have been around since around 1995. But disco went through the usual fashion cycle -- fresh to ubiquitous to stale to utterly gauche. When bell-bottoms and platforms began appearing again in the mid-'90s, they were packaged as kitsch or camp; they were retro.

But punk never became a dated artifact of an era. When it appears again on the runways, it just means that you spend a season seeing people who normally wear Dockers wearing black leather jeans on Friday nights. Since the late '70s, there has never been a time when you could not buy and wear plaid bondage trousers or a dyed crew cut or black eyeliner, white foundation and red lipstick.

Punk has staying power. Punk's aesthetic purely manifests the essence of everything that is good about rebellion -- playfulness, toughness, androgyny, uniformity of anti-conformity. In punk, people who should hate each other's guts are willing to dress alike, simply because they find the look too compelling to discard.

Punk is first, and foremost, about intentional ugliness. It's a style that is supposed to shock people, to make them say, "Ew, I would never do that." It is, essentially, a rebuke to the standard of beauty that fuels mainstream fashion. And as long as that standard remains set in cultural stone and elucidated in all media at all times, there will be a burning desire to shut it down, cut it up, dye it, burn it, defile it and then wear it. And then, for the hardcore DIYs, to accessorize at the local bait shop.