You don't need religion for life after death -- just $35,000 and a taste for liquid nitrogen. 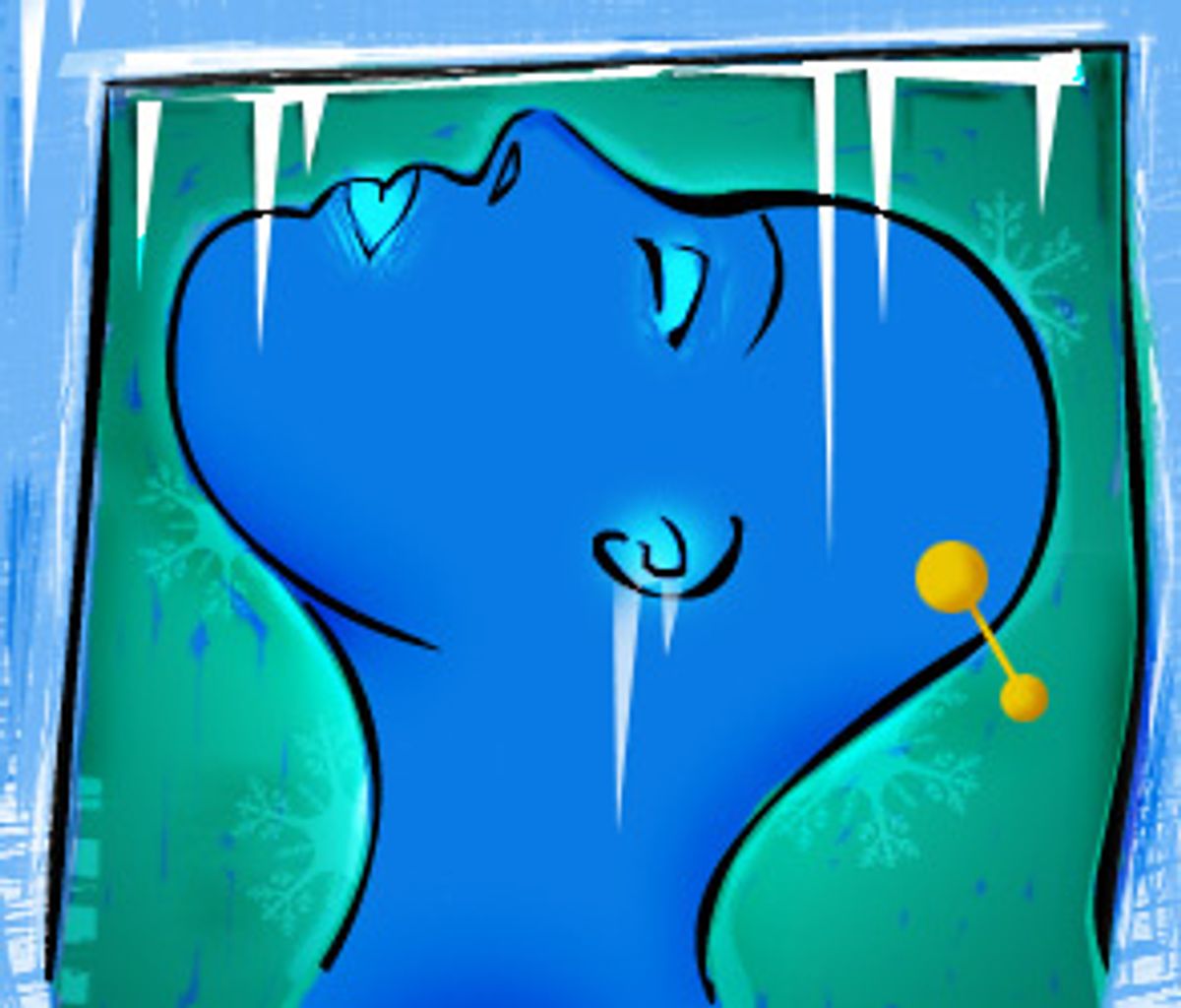 When Robert Ettinger froze his mother's body in 1977, she became the Cryonics Institute's first customer. Last year he froze his wife too, cooling her body to minus 196 degrees Celsius and storing it in an insulated tank of liquid nitrogen. For $35,000 Ettinger and his attentive staff will provide the same service for anyone.

"Dead people don't have much fun," says Ettinger, the 82-year-old founder of the Cryonics Institute. "It's not a question of whether you're happy now," he says. "I think in the future it's going to be better, not worse."

Twenty miles northeast of Detroit, the institute sits atop a small patch of grass, backed by a screen of trees, squat and unremarkable. Few would guess from its drab exterior that it houses the bodies of 38 customers frozen and suspended in liquid nitrogen. Even fewer would guess that seven dogs and nine cats, equally frozen, are keeping them company. But since opening the institute almost 25 years ago, Ettinger has seen membership grow steadily, and his team is performing more suspensions now than at any other time.

"In recent years we've been getting maybe three or four a year, I guess," he says. Ettinger, like his patients and their pets, is waiting for the day they can all be revived.

In much the same way as drowning patients can be resuscitated after long periods without breathing, Ettinger believes researchers will find a way to reverse the tissue damage that accompanies long-term freezing, allowing his customers to be resuscitated too. Until then, their bodies will remain submerged, or "suspended," in liquid nitrogen, in vast containers called cryostats, the largest of which is capable of storing up to 16 bodies at once.

With an eye toward the future, the folks at the institute are aware that the bodies they freeze must be in the best shape possible. In other words, they must be fresh and, to minimize tissue breakdown, the initial phases of suspension must be performed in the minutes immediately after a patient is declared dead. "We can have people on the spot if we know ahead of time," Ettinger says. The sooner after death the process is begun, the more likely it is to be successful, he says. When his wife died last year, technicians were standing by to begin her suspension immediately.

"There were only seconds lost," he says.

Immediately after death, a flurry of activity begins as technicians rush to prepare the patient's body for cooling and suspension. The body is stripped of any clothing and an anticoagulant solution is injected via either the femoral or the carotid artery. Pumped around the patient's circulatory system, this solution prevents the blood from clotting and causing ischemic tissue damage. Technicians cool the body with cold packs while transporting it to the institute's fully equipped laboratories. Blood pressure and acidity are measured constantly, while a device for heart/lung resuscitation maintains vascular flow, pushing anticoagulant around the body, looping through arteries, veins and capillaries to permeate the brain.

Once body temperature is stabilized at 16 degrees Celsius, the patient's blood is thoroughly washed out with buffered physiological saline, which also contains mannitol to prevent fluid migration from the rapidly cooling cells. Finally, after the patient's blood is removed and disposed of, the body is suffused with a glycerine-based cryoprotectant solution that protects the tissues from freezing damage, and then it is slowly cooled again using cold carbon dioxide vapors. After it reaches dry ice temperatures, the body is cooled further to minus 196 degrees Celsius, which arrests further degradation or decomposition.

After placing patients in cryostats, staff at the institute will care for them indefinitely. "They're simply maintained in liquid nitrogen," Ettinger says. "All that means is topping off the liquid nitrogen from time to time. We check them every day."

Cool a body too quickly and it will crack; cool it too slowly and digestive enzymes in the cells will have time to begin breaking down the surrounding tissue. If cells are allowed to rupture, or swelling is not prevented, fluid migrating from within the cells to the spaces between them will expand on freezing, causing further damage. Either way, the result is extensive damage and, until this can be reversed, the bodies will remain in cryostasis under Ettinger's watchful eye.

Injury to cells is not as severe as critics make out, Ettinger says, and many tissues, including human embryos, sperm, skin and bone marrow have been frozen in liquid nitrogen and have recovered when thawed. "There can be cellular damage," Ettinger concedes, "but the most important damage probably is in the connections between cells, particularly the neurons."

In the future, according to cryonicists like Ettinger, scientists will create tiny machines capable of trundling through the body to repair damaged cells molecule by molecule, and atom by atom, until proper function is restored.

"We haven't tried to revive anyone yet because we're nowhere near that capability," he says. Meanwhile, the number of patients in long-term cryostasis increases yearly at the institute. "There is an extremely slim chance the anti-aging breakthrough will come in time for me," Ettinger says. But resuscitation of patients will come sooner rather than later, he says.

"I guess the most common conjectures are anywhere between 50 and 200 years," he says.

"I grew up in the '20s," Ettinger recalls. "I just grew up taking it for granted that we would learn how to cure old age." He first became interested in cryonics as a way of achieving this in 1931, after reading a story called "The Jameson Satellite" in a pulp fiction magazine. In the story, Jameson, a professor, has his body placed in a satellite and sent into Earth's orbit, where it remains for millions of years until it is discovered by aliens and resuscitated. Inspired by the story, Ettinger was determined to make cryonics a reality.

In the late 1940s, Ettinger learned of French scientist Jean Rostand's success in freezing and thawing frog sperm in glycerol without affecting its ability to fertilize eggs. To Ettinger, who spent the next decade obtaining master's degrees in mathematics and physics, Rostand's work was a sign that the same might be possible in humans. By 1960, with his mother still enjoying good health, Ettinger decided it was time to introduce a larger audience to cryonics.

"I wasn't trained in biology and I wasn't a celebrity of any kind and there was no reason to think people would be interested in what I had to say," he says. Instead he tried to drum up interest by selecting "a couple of hundred" celebrities from "Who's Who in America" and writing to them, outlining his theories. The outcome was disappointing, Ettinger says matter-of-factly.

"It received a meager response and I realized it had to be a book-length exposition," he says.

The result was Ettinger's first book, "The Prospect of Immortality," which he published on his own in 1962 and distributed to friends and scientists. Two years later, the book was picked up by a major publishing house and quickly became a seminal text, the book that launched the cryonics movement.

In 1967, as a result of Ettinger's book, psychology professor James Bedford became the first patient to undergo cryonic suspension. Meanwhile, Ettinger was busy forming the Cryonic Society of Michigan, which became the Cryonics Association, which became the Immortalist Society, which formed the Cryonics Institute, which was incorporated in 1976. Ettinger performed his first cryosuspension a year later, on his mother. Ten years after his inaugural suspension, he placed his first wife in cryostasis, and just last year, his second wife joined them.

As a result of Ettinger's proselytizing, the Cryonics Institute is not the only company now offering cryonic suspension services. The Alcor Life Extension Foundation, based in Scottsdale, Ariz., is another. When potential customers call Alcor's toll-free phone number, they are greeted by the following message: "Yes, yes, yes operator, collect calls are accepted. This is the Alcor emergency line; please use this line only in the event that an Alcor member is dying or has died. Please stay on the line, this call is being recorded. Our regular business number is (480) 905-1906, to repeat (480) 905-1906; however, if this is an emergency, continue to hold. DO NOT HANG UP."

Seconds later, a phone rings and someone answers expectantly, finger hovering over a bank of buttons, ready to dispatch a team of trained technicians anywhere in the country to begin an ailing member's suspension.

Essentially, Alcor offers services similar to those of the Cryonics Institute, but with a whole-body suspension costing around $120,000, its prices are significantly higher than Ettinger's fee of $35,000. "There's nothing wrong with Alcor," Ettinger says. "They're much more expensive and we think that some of the things they do are unnecessary."

Alcor is not as forthcoming as Ettinger, either, charging journalists $2,000 for access to its facilities and asking that they sign a media agreement before granting interviews. Among other things, the agreement requires that corpses at the facility not be referred to as "corpses" but rather "patients" or "Alcor members." Similar terms like "stiff" or "carcass" or "cadaver" are also unacceptable.

Unlike the Cryonics Institute, Alcor also offers members the option of neurosuspension, or preservation of the head only. After the cryoprotectant suffusion, the head is surgically removed and stored in liquid nitrogen and the rest of the body is buried or cremated. Long-term storage of a head costs $50,000. Although that's significantly less than Alcor's whole-body suspension, the customer is left with the task of trying to find a donor body if resuscitation ever becomes possible.

In a 1992 paper, Dr. Ralph Merkle, a member of Alcor's board of directors, wrote: "In principle we need only repair the frozen brain, for the brain is the most critical and important structure in the body. Other parts of the body can simply be replaced; or, if we wished, the methods employed for the brain could be extended in the obvious way." In other words, the technology used to repair the brain could be applied to the whole body, at a much higher cost.

The Cryonics Institute has never offered neurosuspensions. Companies that offer them are not helping the cryonics movement gain acceptance, Ettinger says. "The people that do that, they keep the head and sometimes only the brain," he says. "We think it's a public relations negative, and the primary advantage is cost cutting." The cost of a whole-body suspension at the Cryonics Institute is already low, Ettinger says, sounding like a used-car salesman. And he's right: With Alcor asking for $120,000 per whole-body suspension and Trans Time Inc. and the American Cryonics Society, both in California, charging $150,000 and $135,000 respectively, there is little competition in the area of affordability.

Only time will tell if Ettinger is right or wrong about cryonics. If he's right, he will be heralded as a true scientific visionary; if he's wrong, his customers will have lost nothing more than they were willing to pay for their peace of mind. Not content to rest on his laurels, Ettinger will continue to suspend patients and expects to attract criticism for doing so. He is unapologetic; he has a business to run and customers to care for. And he will do so until he dies, becoming just another patient as the race begins to cool his body in time and place it in a cryostat beside his mother and his two wives.