My dad, Vegas, acid and enlightenment

Al looks for nirvana and I go along for the ride. 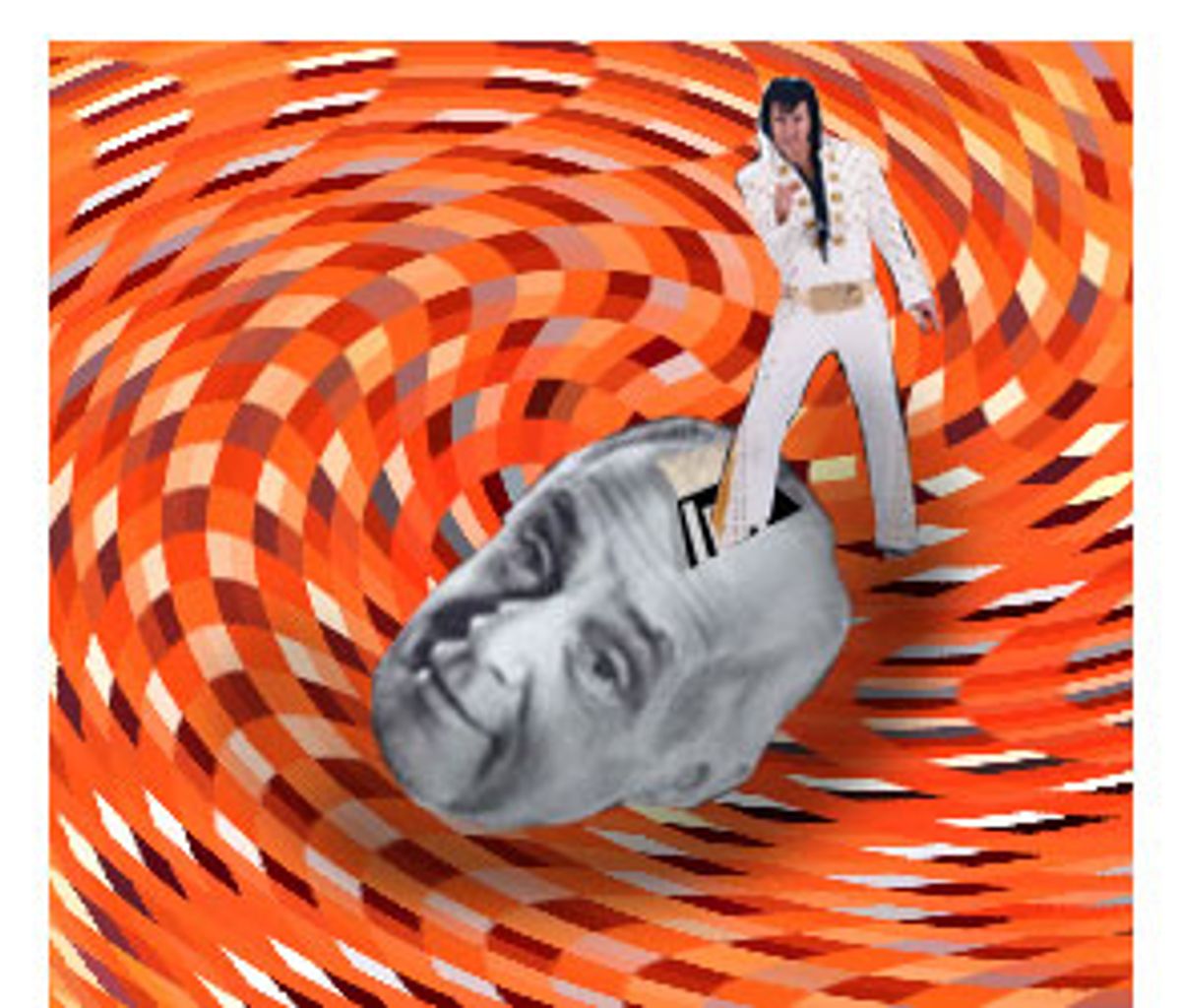 My father, Al, has been through dozens of traditional therapies and psychology fads in a lifelong struggle to become insanely happy. He started out slowly, with occasional bouts of analysis or group, then moved on to anything that offered just a weekend or two of simple dogma. If the chosen discipline came with easy-to-learn jargon that would enable Al to present a façade of enlightenment during small talk, even better.

Since my move to California, Al has combined visits to me with classes or seminars at Esalen, that former Mecca of the Me Decade in Big Sur. On his way back home to D.C. after a week of self-actualization classes or comedy improv therapy training, he'll meet me at the San Francisco airport and we'll fly off to Las Vegas for a couple of days. It's part of what I call his West Coast Swing, a hybrid journey combining Eastern mysticism, Western pop psychology and $4.95 casino prime rib dinner specials. In this way, he can spend two days replenishing the protein Esalen's menu lacks while practicing the interpersonal skills he's picked up in hot tubs overlooking the Pacific.

When we get to Las Vegas, I try to find unusual attractions or entertainment to attend. We'll go to places like the Irish Porker Pub, where a depressed Elvis impersonator imparts his own middle-aged disillusionments to the King's classic hits, or the threadbare Plaza Hotel downtown to catch the Sunspots. They're a lounge act of 50-ish Filipinos who croon a sexually charged "Hava Negilah/If I Were a Rich Man" medley when they perform during Jewish holidays. I've seen blue-haired widows weep at their soulful tribute to Sammy Davis Jr.

I'm certain that my father, who is now in his late 70s, doesn't find the same humor I do in Elvis' angst-filled crooning or the Sunspots' tribute to our Judaic heritage. But taking him gives me a break from having to hear yet again his Big Revelation, the one about how his own father walloped him for throwing a tantrum because he was asked to go buy some milk when he was 14. It's the same memory he always recalls, the one he dredged up during analysis, group therapy and est, and while having his spinal pulse recalibrated during craniosacral massage training.

On our last Vegas junket, a scheduling glitch resulted in our staying on an extra day, and I ran out of screwball distractions. True to form, he related his awesome discovery.

"This last session at Esalen was the best ever!" he enthused over the din of clanging slot machines. "It is the most effective therapy. It was like a spiritual awakening."

We were standing in the Hard Rock Casino and I was trying to read a few of the countless notes that fans had scribbled hastily and left at the makeshift shrine to Kurt Cobain. Whoops and cheers erupted from a nearby craps table indicating the dice were hot and everyone was in the chips.

"Really? How so?" I squinted through the glass at the little scraps of paper that had been inserted into the display that housed Cobain's jacket and guitar. Their words conveyed conflicting emotions of love for an influential idol and unforgiving anger at the songwriter's self-destruction.

"You said this session was effective. Tell me what you mean."

"Well, for one thing, the memories it evoked! We performed one visual exercise and I remembered something I'd repressed for years. I was 14 years old and my father asked me to go to the store for milk and I didn't want to go. I threw a tantrum ..."

"Dad!" I shouted. "You ALWAYS remember this incident!" A gray-haired woman playing two side-by-side slots close to where we stood glared at me for a moment before tossing in more coins and pulling the levers. "You had a big fight; your father hit you," I continued. "You've been telling me the same story at least once a year since I was a child."

"What are you talking about?" he barked, a tad defensively. "How could I have told you about it if I didn't remember it myself?"

"This time I'm going to make you write it down on a scrap of paper with today's date," I threatened. "I'll show it to you next year when you tell it to me again. If a therapy is effective, shouldn't you be able to deal with your childhood traumas and move on?"

This tradition of father-son Vegas junkets began in 1982. On our first trip, Al was fidgeting with excitement from the moment we met at the airport gate. It wasn't until we arrived at our destination and were standing downtown amid the blinking glitz of Fremont Street that he revealed the reason for his enthusiasm.

"Have you ever heard of Timothy Leary?" he asked me, beaming.

"What do you mean, 'of course?'" He was incredulous; I had stolen his thunder. "Where did you ever hear of him?"

"Well," he dismissed me with a wave of his hand, "you probably don't know about the research he and his partner, Baba Ram Dass, did with LSD."

"Actually, I think Baba Ram Dass changed his name back to Richard Alpert and renounced all his former beliefs," I said.

"That must be someone else," replied my father. "You may not know this, but there are Tibetan monks who climb up to the tops of mountains where they live in isolation and meditate for years and years until they reach a state of enlightenment. Leary and Ram Dass discovered that LSD can be used as a shortcut to that enlightenment."

Thousands of blue light bulbs lit up one by one, sending a neon turquoise stripe coursing along a casino's block-long façade and ending at a rooftop star, which exploded with simulated sparks above my father's head.

"Oh, Dad, tell me you didn't drop acid when you were in California!"

He drew away from me. "Oh, no! LSD is illegal. I would never take LSD. But that's beside the point. The important thing is that LSD helps you use parts of your brain you don't normally use. It lets you go back and relive formative events in your life so you can reconcile them with your current problems and move on."

Despite his denial, I realized the obvious. He had indeed taken acid, and on the way back to our hotel the burden of his secret proved too much for him. "We had to go off the Esalen grounds because they would never allow it there," he told me.

"It's an unbelievably strong hallucinogen," he continued. "It's awful to think that there are kids who take it unsupervised. I mean, to think that they go off to rock concerts or to the movies without professional help! I'm so glad that I had someone guiding me. The seminar leader and his assistant explained everything I was feeling and led me back through time to reexperience my birth. Otherwise, I don't know if I'd have known what was happening!"

We emerged from our taxi and entered our hotel, a Las Vegas reproduction of the Pharaohs' Egypt. Inside, cocktail waitresses in Cleopatra wigs and spike heels served the gamblers. Tourists in faux-papyrus barges floated down a simulated Nile River led by teenaged ex-New-Yorker tour guides dressed as archaeologists. As we walked past the talking camels to get a sandwich in the Jewish deli, I feared a flashback. This was not the place I would choose to counsel my elderly father back to reality.

Al has already made arrangements for his next trip west; he's decided that it's time to work on improving his memory. Although a course closer to home comes highly recommended by a member of his African drumming circle, the one at Esalen promises to be more fun. The Big Sur workshop includes discussion sessions held every evening in the hot tubs. (Maybe the morning assignment will be to recognize the previous night's attendees fully clothed.)

I've already booked our Las Vegas hotel room, and this time, I'm prepared. I have a little note describing Al's teenage milk tantrum, written in his own hand, and I've taped it to a photo of him sitting in a jacuzzi, insanely happy.

Joel Blum is a graphic designer in San Francisco.