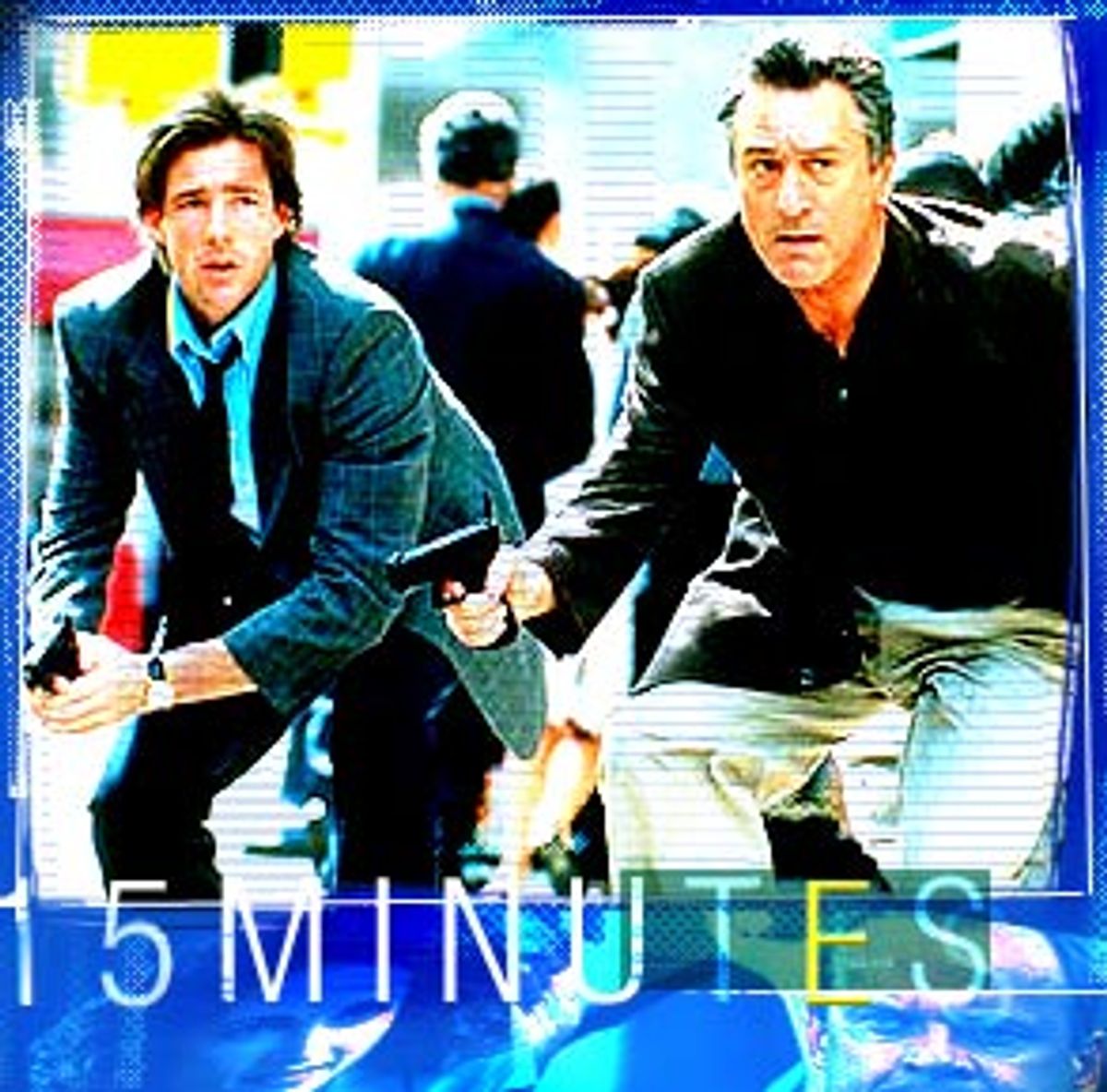 "15 Minutes" is a tiresome screed that purports to teach us a lesson about violence and the media even as it serves up much more than the minimum daily requirement of stabbings, bloody gunshot wounds and relentless stomach punches. In other words, you can get your rocks off and take home your neat little homily, all in the space of some 120 ass-dragging minutes.

"15 Minutes" would be much less irksome if it were simply boldly violent. What's really annoying is that it never even occurs to writer-director John Herzfeld that he wants to have it both ways -- or if it does occur to him, he's so arrogant that he thinks it doesn't matter. He presents violence for our delectation only to then slap us on the wrist for responding to it. And where's the fun in that? "15 Minutes" is less a movie for intelligent moviegoers than a suggestion that we're all brainless chickens, ready to cluck-cluck over how low the media has sunk even as we gorge themselves on its bloodier perks scattered like feed. Herzfeld doesn't think much of us, but he'll happily take our money.

His premise is featherbrained from the start: Two ne'er-do-well criminals, a Czech (Karel Roden) and a Russian (Oleg Taktarov), come to the States to claim their share of money from an earlier botched robbery. Roden is a psychotic hothead with no social skills. Taktarov is a blank -- we learn almost nothing about his temperament, his personal likes and dislikes, other than that he's obsessed with American movies.

Adopting the moniker of his idol, Frank Capra (oh, the irony, that a criminal should don the cloak of the great humanist!), Taktarov steals a video camera and begins filming as he and his buddy launch a killing spree across Manhattan. Their bright idea -- which dawns on Roden as he's watching dumb American daytime talk shows, natch -- is that they can commit crimes without having to take responsibility for them, claiming that in their insanity, they only wished to become famous and have their nefarious deeds presented on television. Later, in prison, they can announce that they're completely insane, after which they'll be freed and primed to clean up on massive book deals.

In an alternate universe where babies sprout from tulip bulbs and lamb chops grow on trees, the scheme could work -- for about 35 seconds. Meanwhile, Robert De Niro, as a celebrity cop, and Edward Burns, as an arson investigator, find themselves drawn into the criminal chase. There's also a young Czech woman (the potentially charming Vera Farmiga, who has nothing to do here) who has witnessed one of the duo's most violent crimes; she makes big eyes at the camera until the movie has no use for her, after which she's dispatched back to Eastern Europe, post-haste.

The mess of "15 Minutes" clears away only when De Niro is on-screen: He's affable and funny, with his cartoon scowl and insouciant, deliberate walk, but he also shows a sweetness that's incredibly touching (not to mention out of step with the rest of this ham-handed movie). He almost can't keep from stammering as he proposes to his TV-reporter girlfriend (the appealing Melina Kanakaredes). Just as he's about to offer her the ring, he blurts out, "I want to have some shoes next to my shoes," a declaration of love that makes no literal sense, but speaks volumes in the offhanded and blessedly inarticulate language of love.

But most of the other performers here are little more than cutouts: Kelsey Grammer, as the host of a schlock-shock TV show, does little more than visibly salivate over his next big story (he's been corrupted by fame and greed, you see). Burns has two expressions, gobsmacked and dumbfounded, and if you have the energy and the inclination, you can almost distinguish between the two.

And all along the way, Herzfeld hammers on his message like a mechanical monkey with a drum: Our society puts such a high premium on sensationalism, it's little wonder people commit crimes just to get on TV. Never mind that Herzfeld shoots himself in the foot by disproving his own theory during the course of the movie. When footage of one of the Eastern Blockheads' crimes is broadcast on television, a group of people watching it in a restaurant (which just happens to be Planet Hollywood -- rampant celebrity-obsession, anyone?) turn away in horror and revulsion.

Maybe we're supposed to be so busy feeling revulsion ourselves that we're not supposed to notice the decency and good sense of these poor on-screen diners, who really just want to tuck into a Schwarzenburger and be done with it. But Herzfeld needs these Little People to make his point. If everyone were a celebrity, even for just 15 minutes, then who'd be left to gawk and stare in wonder and admiration? Similarly, as members of his audience, we're pawns in Herzfeld's foolish little game. The smartest thing we can do is affect an Andy Warhol-style nonchalance: Sure, we've seen it all. But that doesn't mean we have to buy it.