The possibility or mystery of a real human being has been eclipsed by the photographic aura of her face and her self. 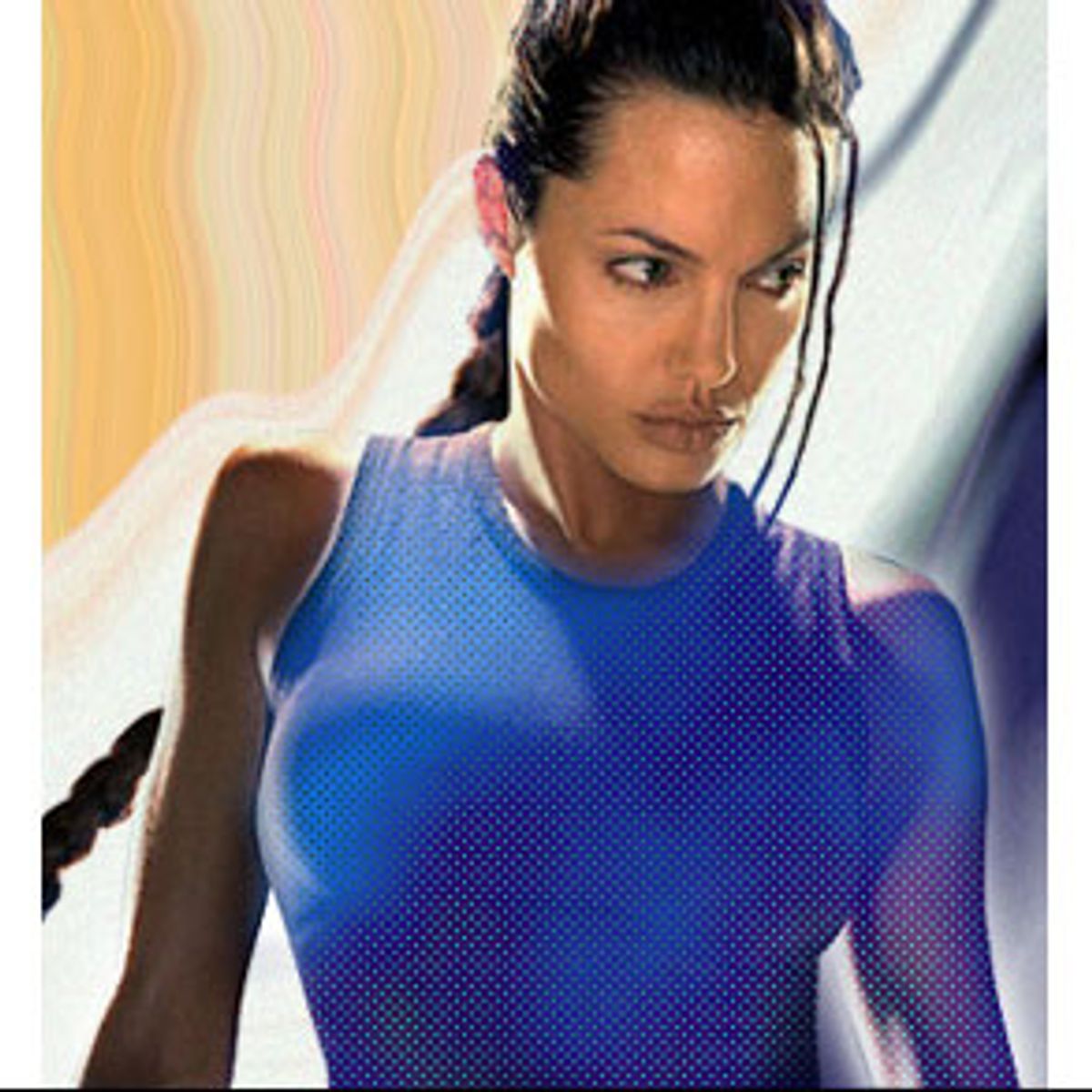 When this column began, the idea was to find something that might be regarded as erotic, or arousing, in a movie. That thought was never strictly observed; it was allowed, I suppose, that a movie person might notice other things beyond the screen. And so, as any regular readers know, Turn-on has roamed far and wide -- sometimes in the wistful spirit of someone who knows he has lost something but can't quite remember what. If, sexually speaking, that means the column has sometimes dwindled, or turned limp, I apologize. But it's difficult to walk around every day of your life attached to a column. And even if you do, there are those who take one look at a thing like a column and know they can't fit it in their day.

Anyway, I was put in this way of thinking by something in the paper today. It was just a little bite of a piece -- what used to be called a column filler. And it concerned Angelina Jolie. Now, as what you might call a talent scout in such matters, my eyes fell on Ms. Jolie several years ago. In Angelina's case, there may have been a moment when she was 12, say, when the incipient jut of her mouth, the provocation in her eyes and her actual age were at odds -- a moment when someone could have wondered if this was some oddity, or a goddess blooming. But for a long time now, Angelina Jolie has been ... well, I'm inclined to say she's been a photograph.

What I mean is that the possibility or mystery of a real human being has been eclipsed by the photographic aura of her face and her self. It's the way attitude turns into photographic emulsion. Thus, Angelina Jolie has been anyone's idea of a very sexy young woman. Which is fine, I dare say, the first two or three times you look at her.

How different from the 1950s, that age when there was a whole lot less sex around and when a large point of the movies was to thrust the nearly hysterical sexual attitude of Marilyn Monroe, Brigitte Bardot, Gina Lollobrigida or Jayne Mansfield in our faces. Those women had a look that never needed the caption "Can you imagine what it would be like to get it on with me?" Guys could: It was the last great gasp of pure fantasy before censorship caved in. In truth, these goddesses seldom lived up to their captions. The guys who went to bed with Monroe could only recall her problems, her neuroses, the little physical defects.

I'm making no such suggestion about Jolie. Still, in the papers today, there she is filling a column with a sound bite -- or overbite in her case. She and her husband, Billy Bob Thornton, have just bought a new home, and they're redoing it. One need, according to Jolie, is "a padded playroom. It will be for those moments in the night when you want to kill each other because you're so in love."

Now, we'll never know if she said it or if she just read over the phone what some flack had written for her. So I don't want to blame her. I like her. But it's a proof of my fondness that I see her as the kind of healthy beast who needs 11 or 12 hours a night. And I'm betting that if you could wake her, you'd have snarling anger or bewilderment on your hands.

That's not what she means, is it? I think she came out with this line -- or her people put it out -- so that we'd go on for another month reckoning that Angelina Jolie is hotter than french fries. It's all attitude, and pretty humorless. Which is why I remember how even in the 1950s there was another line of looks (like Audrey Hepburn, Grace Kelly and Doris Day) that seemed to say, "Sex? Gee, I don't know. You'd have to show me." In broad daylight.