"The Lone Gunmen" strikes out, but "BattleBots" and "Junkyard Wars" portray culturally ascendant nerds in all their glory. 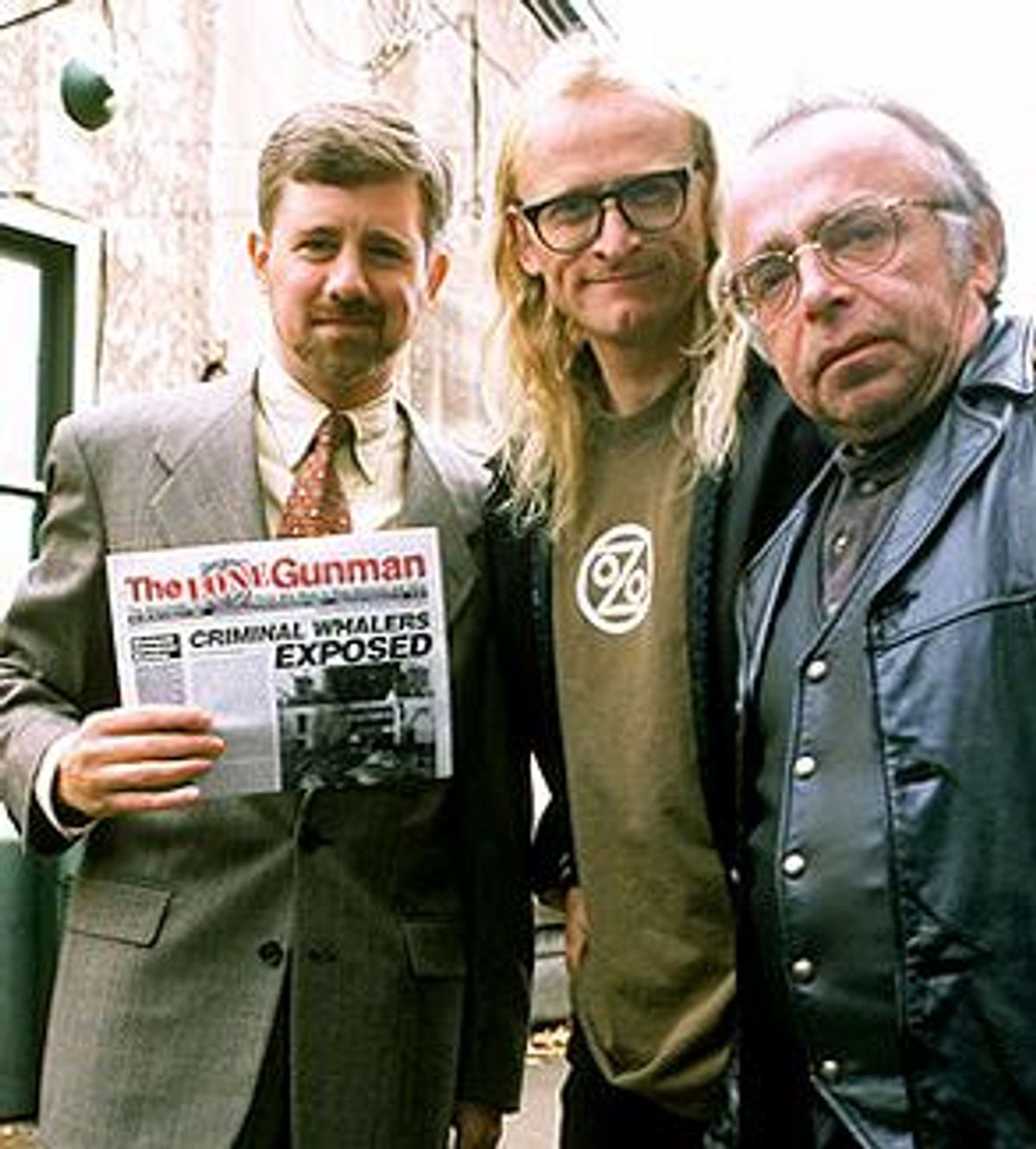 Poor Frohike: The shortest member of "The Lone Gunmen" never gets a break. In the first episode of this new TV series, he not only falls flat on his face twice (once, gratifyingly, in a field of mud), but after his foxy female nemesis bestows on him a viciously ironic kiss, she serves up a final insult: "That was probably the first time you ever kissed a girl!" See: Geeks are clumsy and awkward. And they never get laid. Get it?

Such disrespect is but the tip of an iceberg of ignominy heaped upon geeks in Chris Carter's new TV series "The Lone Gunmen," a show that triumphantly insults the very constituency it's supposedly trying to target. Any true geek will watch this show and wince. But fortunately for today's techies, "The Lone Gunmen" is far from the only place on the TV dial where they can find their own kind: In accordance with the cultural rise of all things nerdish -- the Internet, digital culture, hackers -- we are also being blessed by the emergence of what can only be called geek TV. On Comedy Central and the Learning Channel, programs such as "BattleBots," "Junkyard Wars" and the upcoming "Robotica" feature geeks in their home habitats, wielding power tools and wreaking mechanical havoc.

The rising stars of geek TV are perhaps best described as reality TV for those with a passion for hardware tinkering (or, at least, a fascination with the way things work). "BattleBots" and "Junkyard Wars" are a gallery of the geek imagination: smoke-belching flotation devices, careening robots with enormous spinning saws, contraptions welded together with soldering irons and lots of tech savvy. The shows are not only an homage to the geek brain -- witnesses of a world in which a programmer like Linus Torvalds can become a hero to millions and coding is considered cool -- but are terrific entertainment to boot. Together, they manage to make up for any insults that "The Lone Gunmen" and its Hollywood ilk convey.

Geeks have long suffered at the hands of Hollywood. "Revenge of the Nerds" codified the stereotype in the 1980s -- geeks as social misfits more comfortable with computers than other humans. And though the look may have changed slightly over the years -- pocket protectors and ill-fitting button-down shirts giving way to baggy T-shirts and shaggy hair (the coke-bottle glasses endure) -- the social stigma has remained. Think greasy pizza, Jolt cola, all-night coding and gaming sessions, science fiction conventions and a juvenile fascination with the untouchable female: As far as most TV shows and movies are concerned, these traits still define the geek character.

At least, they did until recently. Although "The X-Files" hinted at a fulfilling world of geekdom (Mulder may not have programmed, but any true geek could recognize his monomaniacal obsessiveness), it was "Freaks and Geeks" that first embraced the idea that the weirdos are more interesting than the normal people and worth a prime-time TV show. Now, in retrospect, the attraction of geek TV seems obvious. Who do you identify with more: brainy Lindsay Weir, one of the misfit stars of "Freaks and Geeks," or the oh-so-perky Jennifer Aniston, she of the flippy hair and the micromini skirt? Unfortunately, "Freaks and Geeks" was canceled when it failed to garner a large-enough viewership.

But it was inevitable that new TV shows would arise to take its place: We now live in an era when a programmer like Napster's Shawn Fanning is a virtual rock star, über-nerd Bill Gates is a cultural icon and hackers are turned into subculture heroes. If the meteoric rise of the Net over the last six years has changed our social hierarchy in any way, it's been through the revolution of geek status. People who are smart with computers and machines are in high demand: They make money, command magazine covers, revolutionize entire industries and become famous. Yes, geeks are now cool countercultural figures, and it seems about time for TV to sit up and give them their due.

The best of the new geek TV shows are reality-based and, so far, found only on cable. They depict geeks in their natural environments -- tinkering with computers, fiddling with gadgets, rummaging through junk -- and let the resulting chaos provide the entertainment. The results are far more fascinating than anything a roomful of overpaid scriptwriters could come up with. (Take note, Chris Carter.)

"BattleBots," on Comedy Central Tuesdays at 10 p.m., launched in August and is now the granddaddy of geek TV. It is based on the simplest of formulas: The producers took an already popular geek pastime and turned it into a show. "Robot Wars" competitions had been occurring in the San Francisco Bay Area since 1994. In a twist on the equally popular Survival Research Labs performances, local robot fans would build fantastic, destructive machines and then throw underground tournaments pitting them against each other. The point was to build the machine that could inflict the most damage on its opponent; the joy was simply in watching remote-controlled gadgets tear into each other with increasingly inventive weapons.

The TV version of "BattleBots" documents the mayhem in a more formal setting, and it's just as fascinating on TV as it is in real life. The battlefield is booby-trapped, so that robots fear not only each other but spinning saws that emerge from nowhere and spiked walls and giant hammers that can smash down at any time. The robots wield deliciously inventive weaponry: wedges that stealthily slide under opponents and then flip them upside down using hidden levers; enormous nail-guns; "crushers" that squeeze enemies into a pulp; and the ever popular spinning blade, which can slice an unwary opponent into pieces in nothing flat.

Take, for example, the delightful robot Ziggo, which recently devastated the competition in the lightweight BattleBot tournament. This simple spinning robot zipped across the booby-trapped battlefield, rotating frenetically as it sent more vicious-looking machines, such as the circle-saw-wielding Backlash, flying through the air. It was impossible not to cheer as Ziggo took on bigger, more complex robots -- and what is geekdom but the ability to appreciate the joys of a well-designed machine?

BattleBots encourages us to indulge in the pure, vindictive pleasure of watching robots mutilate each other, to exult as fancy gadgets are smashed by hammers or launched upside down by flipping arms. "BattleBots" is the WWF or monster-truck competition for the programming set: a showy kind of violent voyeurism, but rooted in a formal knowledge of mechanics. It's impossible not to empathize with the sheer joy of the robots' owners as they stand on the sidelines watching their soon-to-be-destroyed babies. These are geeks in their element, building machines that both amaze the world with their technical prowess and can deliver a stunning death-blow to some other uppity robot.

"BattleBots" has become a cult hit, even inspiring an upcoming line of collectible action figures, and the knock-offs are now emerging. "Robotica," which will launch in April, is the Learning Channel's version, the main difference being that "Robotica" intends to go behind the scenes and document the conceptualization and building of the machines. The competitions will also include robotic performance at a series of tasks, rather than just orgies of destruction. (According to the press materials, "Robotica" will "up the ante with surprise 'outside forces' such as oil slicks, walls of fire, torrents of water and punishing storms of hail." We can't wait.)

On Mondays at 8 p.m. the Learning Channel is also offering its own bona fide geek TV hit: "Junkyard Wars." Like "BattleBots," "Junkyard Wars" pits geeks against each other in a war of mechanical skills. "Junkyard Wars," which originally began in the U.K. as "Scrapheap Challenge" and was only imported to the United States in January, gives two teams of three people a challenge -- say, to build a boat or a drag racer -- and then sets them loose in four acres of, well, junk. Each team is bequeathed one expert advisor and given 10 hours to complete the task in whatever way they see fit.

The show doesn't have the highest production values. The quirky and unscripted hosts (hyperactive George Gray and the endearingly British Cathy Rogers, who created the show and is a kind of geek dream woman) wear the exact same outfits in every single episode. But the sheer inventiveness of the teams is inspiring: Who knew you could build a cannon out of a discarded piece of metal pipe, two broken bicycles and an air compressor torn from an industrial refrigerator? Or a rusty, leaky boat from the plastic roof of a VW bus, a motorcycle engine and a length of wire? Even more compellingly, the competitors represent the full range of the geek spectrum -- mechanical engineering students from Stanford University, mullet-headed aircraft mechanics, kinetic sculptors, retirement-age professors, construction workers, firemen and roboticists (and even, believe it or not, one woman).

Instead of identifying geeks based on their Coke-bottle glasses, "BattleBots" and "Junkyard Wars" recognize what really makes a geek -- the creative desire to make something new, whether out of code or silicon or chicken wire. And this, in turn, is probably why both shows are ultimately so popular with the techie population: Geeks are clamoring to compete and are easily found ruminating about the joys of the show on sites like Slashdot. (Notes one former "Junkyard Wars" participant, on The-Nerds.org, "Ten reasons why being on 'Junkyard Wars' is better than being on 'Survivor': You don't have to eat rats. You don't even have to catch rats. Rats fear you. So does everyone and everything else.")

In comparison, a show like "The Lone Gunmen" seems doomed to failure. "The Lone Gunmen" may be trying to be geek TV, but it misses its mark, instead resembling little more than a slicker version of "Revenge of the Nerds" revised for the conspiracy theorists of the 21st century.

The show had potential: The three hackers who make up the Lone Gunmen appeared occasionally as prickly and reluctant assistants to Mulder and Scully on "The X-Files" and had an appreciable cult following. They were sarcastic and smart and great hackers, if a little weird and totally paranoid. But when Chris Carter spun them out into their own world, he made the unfortunate decision to try to make them funny -- and even worse, to make them funny by poking fun at them.

Every week on "The Lone Gunmen," these three social misfits attempt to save the world, or at least our civil liberties. There's a healthy dose of paranoia about government conspiracy and plenty of references to dot-com IPO payola. That's fine enough as it goes, but the show just can't stay away from hoary geek stereotyping. Although the three main characters -- Langly, Byers and Frohike -- are heroes, they only get to save the world after making total fools of themselves. They vomit in golf bags, trip on wet rugs, stare at buxom babes and get tackled by football players twice their size. And to add insult to injury, their nemesis is the ludicrous figure of Yves Adele Harlow, who, we are supposed to believe, is a sexpot world-class hacker in leather pants who plays with machine guns when she's not torturing the gonads of our protagonists.

It's unlikely that today's audiences will cotton to the stereotyped antics of "The Lone Gunmen's" nerds. Teenage boys aspire to be hotshot programmers these days and look to the Net for cool subcultures; a show that equates geekdom with being a social pariah seems like an unnecessary and unwanted throwback. But no matter. The geeks will be happy with geek TV on cable while they wait for CBS to decide to pass on "Temptation Island" Part 6 in favor of, say, a show that pits two programmers against each other in a battle to build the best database. OK, maybe that will never happen. But hey, geeks can dream too.