Where's the other team?

As Bush's tax cut sails through the House, Democrats grumble about their lackluster leadership. 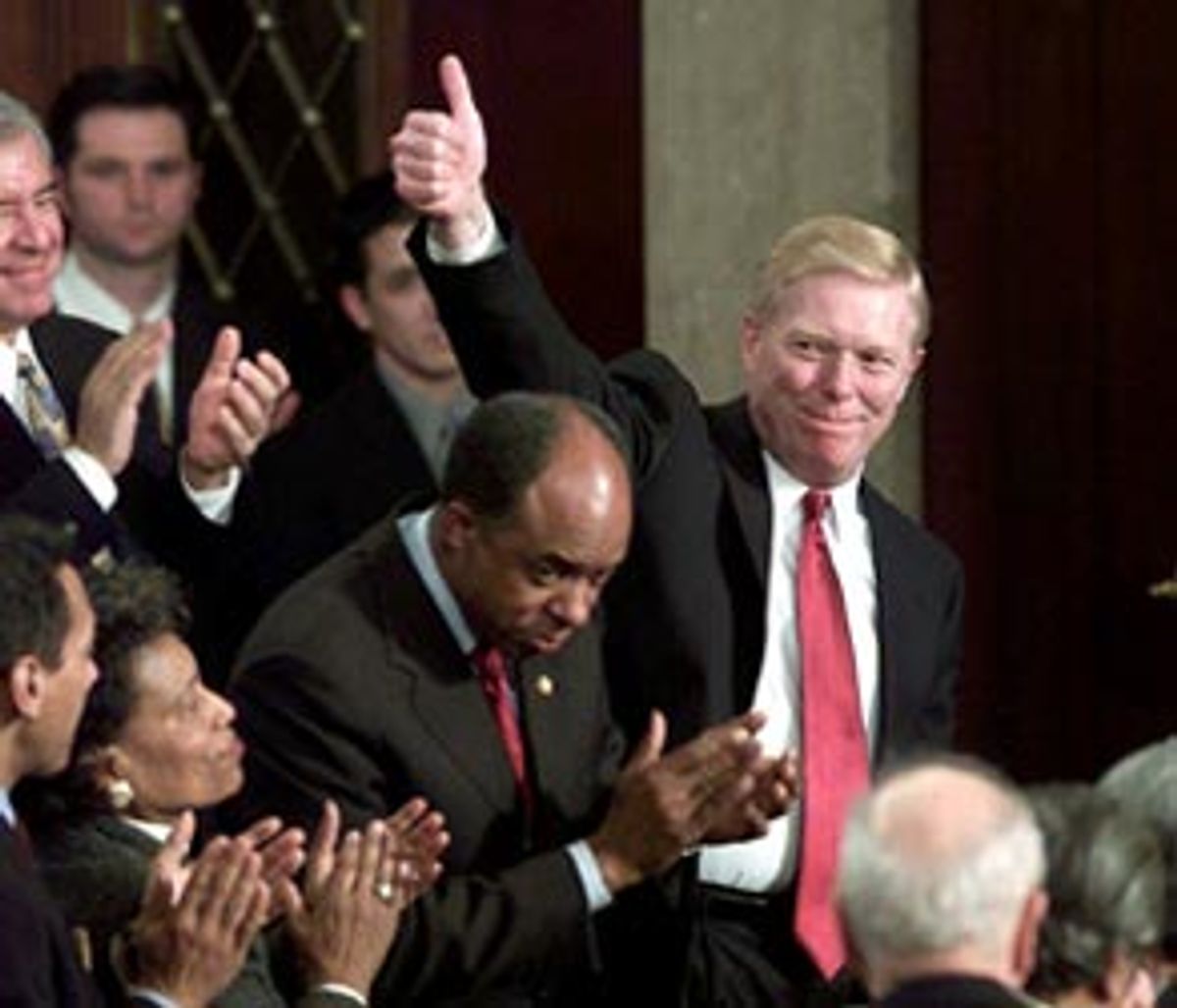 You're a congressional Democrat, and President George W. Bush is on the brink of his first big legislative victory. His $1 trillion tax cut is about to sail through the House -- it eventually passed Thursday 230-198, with the support of 10 Democrats who jumped ship. It's sound bite time. What do you say?

If you're Rep. Harold Ford Jr., D-Tenn., a rising star in the party, you might look to the daily talking points from the House Democratic leadership: "Economic forecasts change ... leaves no room for priorities ... fails to pay off the debt ... Republican plan is unfair."

But Ford could also choose talking points from roughly a half-dozen other Democratic factions -- a microcosm of the disarray that helped Bush pass his tax plan Thursday. Not only did the Democratic leadership fail to gain any Republican votes, they couldn't hold their own caucus, and the party reacted to the setback with a level of message confusion that isn't likely to convince voters that Democrats had a solid plan for taxes.

Ford could have chosen talking points from the moderate Democratic Leadership Council, for instance: "We ought to pass a budget first ... We need to take an honest look at the projections ... Bush's tax cut will consume the entire surplus ... .New Democrats believe in a balanced approach -- pay down the debt, cut taxes and invest in our future."

And, of course, there's the Congressional Black Caucus: "Bush tax plan leaves out third to half of children in many states."

And from the conservative Blue Dog Democrats: "Blue Dog effort to spread the message that we need to consider the entire budget before rushing ahead with individual tax cuts."

And from the House Centrist Coalition: "The [alternative, Senate] resolution would mandate the use of a trigger as a 'safety net' to ensure tax cuts and spending are in line with actual money on hand ... .the resolution warns against passing tax cuts or spending increases that are so large taxes will have to be raised or spending significantly cut if anticipated surpluses fail to materialize."

And from the Democratic National Committee: "Bush Taken To Task For Abandoning Bipartisanship."

"Yeah, we got about nine messages," Ford joked Thursday afternoon outside the Capitol. "That's good," he said with a smile. "That means we're ready for anything." But Ford says this with a slight wince.

But the scatterbrained way the Democratic leadership, particularly in the House, has been running business has started to create internal rancor.

During Thursday's vote, confusion over the Democratic message reached a ridiculous point. Conservative Blue Dog Democrats led the charge against the Bush tax cut, arguing that it was irresponsible to offer a tax cut proposal without it being part of a larger budget resolution package. But while these Democrats made this argument, others in the party were offering their own tax cut proposal. "Yeah, their message is a bit contradictory," a leading GOP staffer remarked. When I later contacted this staffer to tell him I was writing a story on the House Democrats, his response summed it all up pretty concisely. "On who?" he joked. Concerns over communications snafus, along with larger leadership problems, were raised Wednesday in an occasionally simmering Democratic caucus meeting, where two groups seemed to emerge at odds with one another, according to congressmen who attended the meeting.

The first group is made up of more conciliatory members who wish to work with the White House and downplay issues like gun control, with a two-year plan to recapture the House. This group is led by Minority Leader Rep. Dick Gephardt, D-Mo., and Ways and Means ranking Democrat Rep. Charlie Rangel, D-N.Y.

While this first group also opposes the tax cut, the second group feels that it didn't do so strongly enough -- a greater passion, they believe, might have led Republicans to defect from their party.

Of course, this second group faces its own contradictions. While it hoped to draw Republican supporters on the tax plan, in general it wants the Democratic Party to be more combative and aggressive against the Bush White House policies they oppose. It consists of most members of the Congressional Black Caucus, angry Florida representatives, and Democrats from traditionally Democratic power bases like New York and California. This group wants to constantly remind the world that Bush lost the popular vote by 537,000 votes to Al Gore, and they want to push more traditionally liberal causes, like gun control.

Ironically, one of the few items that members from both groups can agree on is that their leadership is wanting. "Our leadership is rudderless," one Democratic member of Congress said. "They're weak."

This member, reflecting the view of many of his colleagues in off-the-record rumblings, characterized Gephardt as a poor leader who can't control his caucus, doesn't know what he believes in and changes his message every day. Gephardt -- who long feuded with Gore -- is said to blame Gore's limp presidential campaign for the failure of the Democrats to recapture control of the House. But, ironically, many members of his caucus have the same complaints about Gephardt as they do about Gore, according to several members of Congress interviewed for this story. He polls and focus-groups every issue to death, they complain. He's a hollow politician who can't inspire his way out of a paper bag. And what makes Bush's first legislative victory that much more painful is the fact that the bill is controversial enough that its clear swing through the House could have been far more difficult. Half a dozen Senate Republicans, for instance, are expressing serious concerns on the record.

Some Democrats are surprised that Republicans wouldn't defect from this bill.

"What I'm hearing from my constituency is a lot of skepticism" about Bush's tax plan, says Rep. Joe Hoeffel, D-Pa., who represents the Republican-leaning swing-district Montgomery County suburbs outside Philadelphia. "Bush has not sold his plan to the middle-income taxpayer," Hoeffel says. Nationwide polls raise similar skepticism. A Los Angeles Times poll released Thursday shows the public siding with the Democrats' tax plan by 55 percent to 30 percent, described in the survey as a tax cut "about half as big with more money devoted to spending on domestic programs such as Medicare and education and reducing the debt."

Rep. Anthony Weiner, D-N.Y., said Wednesday that a Bush victory with any fewer than 20 Democratic defections "would be considered a big victory for the Democrats." Well, that's a little lame, isn't it? "It's true; we're in a bad spot right now," Weiner said. "The worst thing that can happen is that we become completely irrelevant."

But these days, making the House Democrats irrelevant seems to be perhaps the only actual bipartisan achievement in all of Washington.