"The enemies are capitalists"

In a comic (sort of) new series, the man who built "The X-Files" on paranoia about government finds something new to worry about. 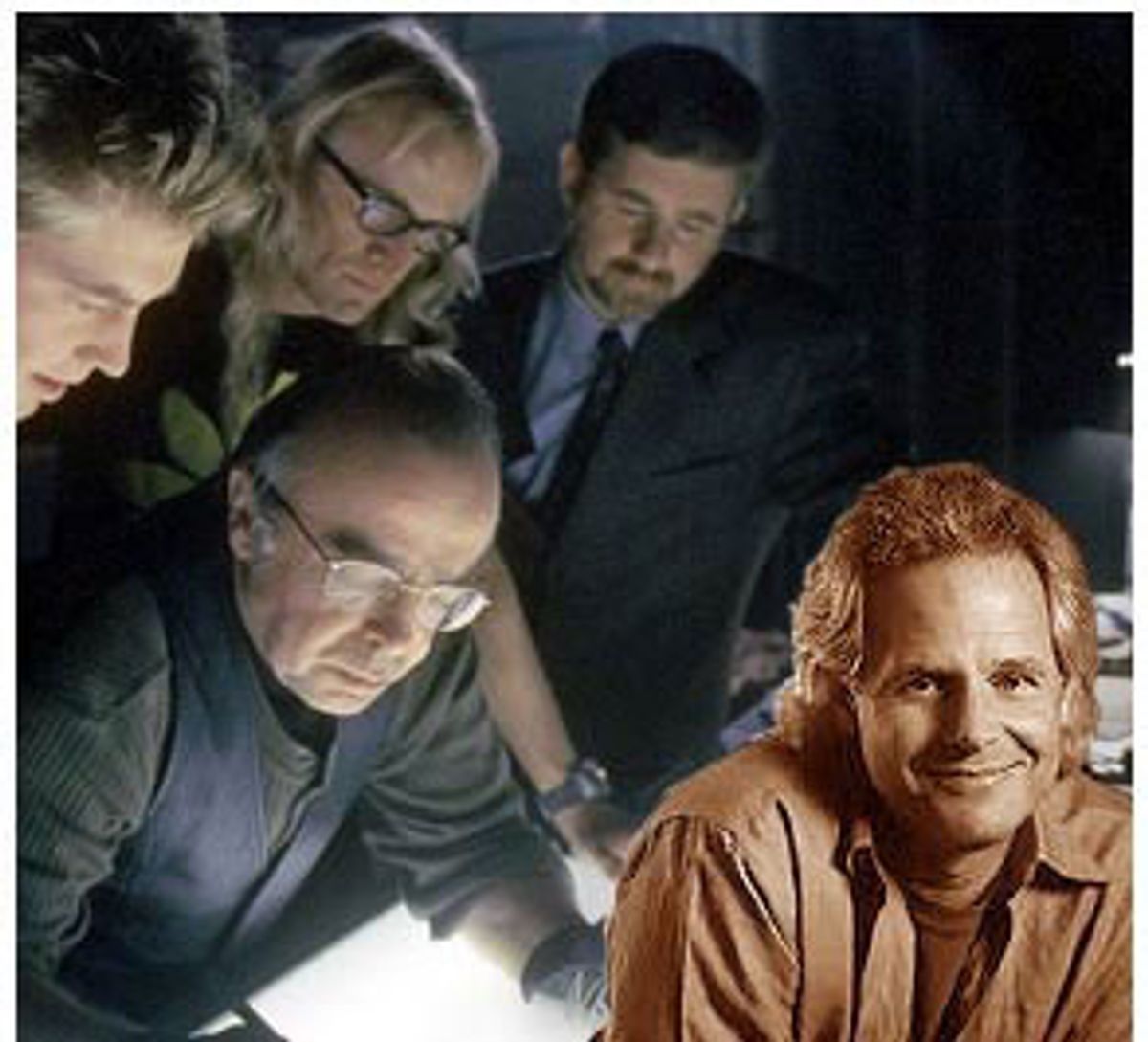 "The Lone Gunmen" is not what it looks like. The first two episodes of the new spinoff series by "X-Files" creator Chris Carter debuted in the Sunday night time slot, in place of the show that made him famous. (The show moves to Fridays on March 23.) The premiere starred the three bumbling conspiracy theorists, known collectively as the Lone Gunmen, who in past seasons of "The X-Files" have often helped Mulder and Scully navigate through shady government deals and investigate visits from aliens.

The first show wasn't radically different. At the start, the trio -- played by Bruce Harwood, Tom Braidwood and Dean Haglund -- were stealing a computer chip to demonstrate that a certain megacorporation would use it to invade privacy. (They planned to publish the news in their conspiracy newsletter, the Lone Gunman.) Meanwhile, Byers' (Harwood) father died in a mysterious car wreck. The three Gunmen were quickly pulled into a government plot and had to thwart an attempt to fly a jetliner into the World Trade Center.

Some funny moments were peppered throughout this first installment: Byer's dad's ashes were launched and dispersed into the air in a model rocket; a "Mission: Impossible"-type heist scene was wrecked when a winch went haywire. Its conspiracy tone wouldn't be out of place on "The X-Files."

But in the second episode the comedy moved upfront. A major part of the show centered on a blind football team whose players follow a beeping pigskin; every time a cellphone rang someone got sacked. And two other recurring star characters, hunky Stephen Snedden and spicy Zuleikha Robinson, rounded out the cast and balanced out the Gunmen nerd factor.

The show isn't perfect -- the electric-guitar-solo music is embarrassing and some of the gags feel forced, for starters -- but its willingness to be outright zany and even a little bit dumb could pull it away from "The X-Files" and that show's many imitators. Carter says this is exactly what he and his new team have in mind. He wants slapstick and physical comedy with a little pathos, like "The Simpsons." The challenge is to make it catch on -- and fast. The series is Carter's third attempt at a new show, after "Millennium" and the disastrous "Harsh Realm," since "The X-Files" took off in 1993. "The Lone Gunmen," he figures, at least already has an "X-Files" fan base.

Two weeks ago, amid a string of media interviews to promote the new show and make sure it gets a chance to find a audience before programmers pull the plug, Carter talked with Salon in a hushed, leathery conference room at Fox's New York headquarters. Halfway through the interview, a voice on the intercom announced a potential alarm.

From what I know, you have a surfer background and what I assume is sort of a cool-guy mentality. And you've done this kind of really sober paranoia show in the past. Now you're writing about nerds.

I'm basically a geek; I'm just not in a geek package. I'm much more interested in geeks and geeks' company than cool guys' company. I think one of the most foolish things in the world is to go chasing what's cool. It's not interesting to me -- it's very self-conscious. I very much prefer the unselfconsciousness of geekdom.

As the show goes on we really separate from "The X-Files" tonally. "The Lone Gunmen" is akin to the more humorous "X-Files" episodes. I think that's really what we were going for -- to keep that vein alive.

What's the difference in the writing?

I came out of comedy and everybody who works on the staff, I would say, has comedy skills equal to their dramatic skills. For us, it really is taking something that we do anyway and making it the focus rather than the relief.

I noticed that there are two "Mission: Impossible" references in the first two episodes. The first is the famous heist scene from the Tom Cruise-Brian De Palma movie, and the second is from the classic television show, where they've created this set to nab a guy. What is it about that show, that franchise, that you admire?

You've been preoccupied with it for a while. I watched "The X-Files: Fight the Future" DVD and you and the director talked a lot about getting to work with Martin Landau, who starred in the original series. As a writer, do you look for a way to keep bringing in these old influences?

If you're lucky. Some of the things you'd like to do are just impossible -- people are not available, they're too expensive. But I suggested that we do a Don Adams (Maxwell Smart from the '60s comedy "Get Smart") cameo in an upcoming episode. I think that there's a chance to do that, to bring back people who were interesting to us when we were young and watching TV, to bring it around full circle.

Speaking of cameos, I'm sure you've answered this a dozen times, but will there be "X-Files" crossovers?

Yeah. We've already filmed one with Mitch Pileggi, as Skinner, coming to interact with the Lone Gunmen on a case. And we have another one we're cooking up for the season finale.

I don't know a lot about television, but I understand that it is a collaborative process. A lot of times the creator or the principal writer will do a lot at the beginning to establish the characters and then later sort of back up and be able to do the macro. Is that what happened here, and can you contrast that to what happened with "The X-Files"?

Well, "The X-Files" was just me, sitting in a room on my own. And this is a case where we had three characters on the show that worked, and I have three guys who work on the show that came to me and said, "We think these guys can carry their own TV."

So you're essentially doing the macro story on this, or are you writing episodes?

I co-wrote the pilot and I wrote Episode 4.

An alarm has been received on the 39th floor. Please stand by for further instructions.

What floor are we on?

He sounds a little ... breathless.

It's stopped. OK, what sort of research are you doing? You've said that "The X-Files" was interesting to you because it always centered on real science.

Once again, we've tried to stay true to the technology, although we push the limits of what can be done slightly, for our own purposes, if we're telling a story about something somebody may have, somebody may have developed, somebody may not know about. But we do try to stay true because the only thing that makes the stories interesting to me is if there's some believability. The more outrageous you are in your tone, the more believable [you have to be] in your technology.

A lot of that stuff is viewer-unfriendly. If you don't understand the language. A little bit goes a long way.

Oh, every week I'm handed a sheaf of paper of Internet Web postings, responses to the week's episode. And I read every one of them.

With steam coming out of my ears.

Do the Lone Gunmen characters have any connection to the fans of the show?

Basically when you go to ["The X-Files" fan] conventions you see the Lone Gunmen. It is a flattering portrait of our fans, "The Lone Gunmen."

Did some of the inspiration for these characters come from those fans?

The characters were created by Glen Morgan and James Wong the first season. They were later developed by all of us into this TV series. I think Morgan and Wong told me that they were originally inspired by the strange folk you see at sci-fi conventions, selling pamphlets and brochures and tracts about conspiracies and such.

Attention, attention. This is your fire safety director speaking. We had an alarm on the 39th floor. A water flow alarm ...

"The X-Files" is famous for its mythology episodes and these long story arcs, but also for its themes. Will you have a similar structure with this series, or because it's comedy can you move away from that?

We will have mythology, but it won't be about aliens or the existence of extraterrestrials. It'll be really character-driven. There will be arms dealers, international and multinational sub rosa connections.

In "The X-Files," the enemies were government. This time it's looking like the enemies are --

The enemies are capitalists. Not so much arms dealers, but people who have selfish motives.

Has something changed in your understanding about contemporary America? "The X-Files" was praised because it captured a sense of paranoia that hadn't manifested itself as much in pop culture. Have you moved on? Have you personally said, "It's not the government that I'm worried about, it's the corporations?"

That's kind of where I am right now. I'm looking at the consolidation of large corporations and of media and of power in America as not necessarily something that's in the best interest of the public.

He says from the second floor of the Fox building ...

When you write something like this, how do you start? Do you work from the characters outward, or do you come up with the themes that you want and figure out how to get there?

When we had done the pilot, I said every episode has to have an idea, and just the suggestion of it has to make you laugh. It has to be a government program with chimpanzees, a product of the Cold War -- trying to create a smart chimpanzee, the ultimate warrior assassin.

Is this an upcoming episode?

It is. What happens is that one of these chimpanzees is smart. And now, with the Cold War over, he's a remnant and he wants out of the program.

That's funny. Way back when, I think I read a story where you said that "The X-Files" was only going to play for five years. And I thought that was such a good idea.

I don't think I said we were quitting, but I think that's when I said that we would see a spaceship. The truth is that you don't foresee how many more stories there are to tell. I remember last year, I had an idea for a story. This was when we might not have been coming back. And I realized that we only had three or four more episodes. There was reason to go on.

When you reach that five-year mark, do your attentions start to wander?

I think naturally you start to say, "I wish I could tell stories with these characters." That's what "Millennium" was. I had done an episode the second year called "Irresistible," about a death fetishist. And I thought it could have worked as an "X-Files" or on a show like "Millennium." I think "The Lone Gunmen" is borne out of all of our love of our funny "X-Files" episodes, and the success of them.

Thanks, I'm going to need it.