On the road again

Pushing his campaign-finance bill, McCain swings through California. But Bush is out there too, and this time he's getting all the press. 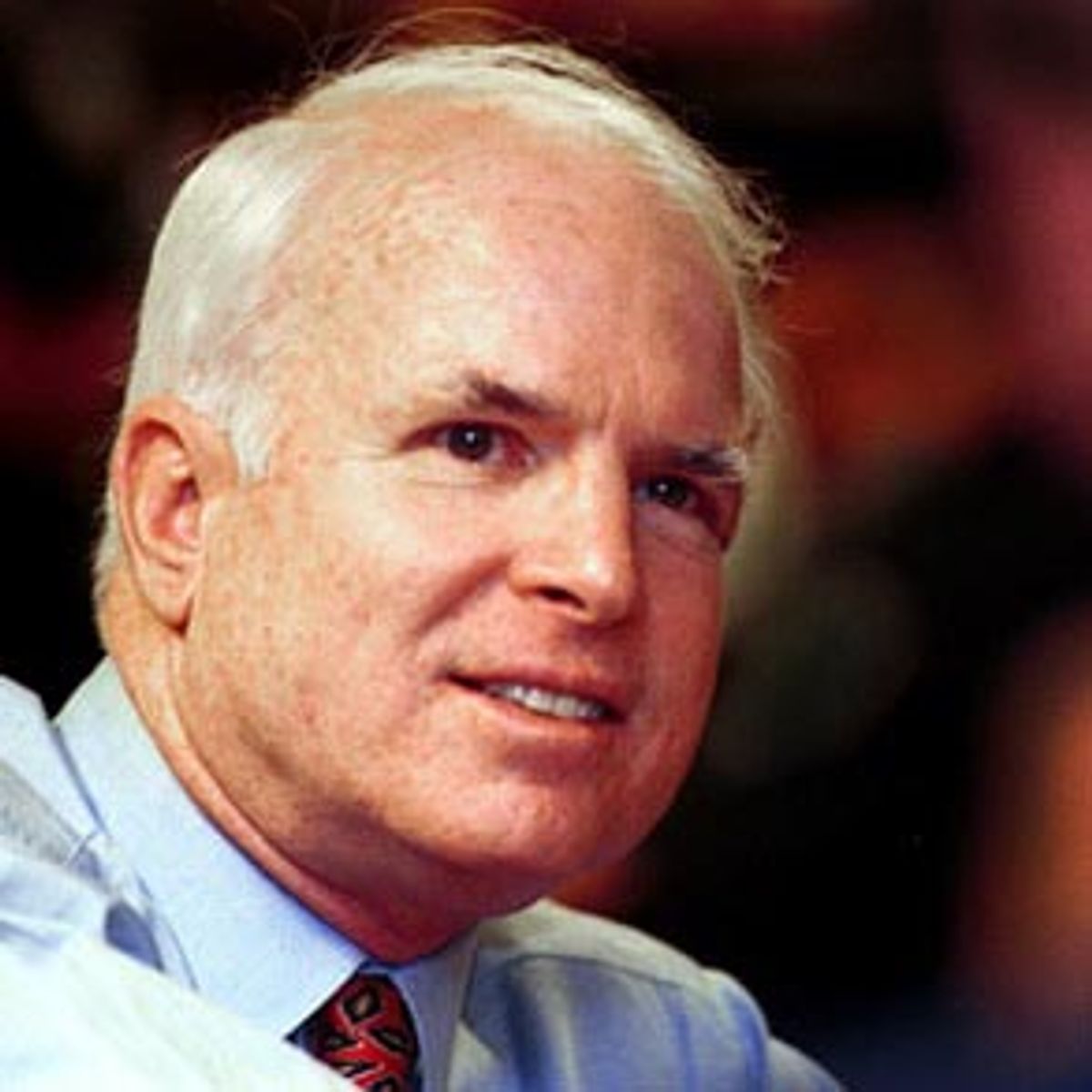 Got a proposal you want to push through Congress? Then perhaps you should prepare to hit the road. Politicos need road shows to support legislation the way rock bands need to tour to support a new record.

The two senators were in town to talk up the campaign finance reform bill that bears their name and is scheduled for Senate floor debate beginning March 19. Publicly, McCain and Feingold both say they have a filibuster-proof 60 votes to pass the bill, after a number of Republicans who opposed it lost reelection bids last year. But it was clear by their very appearance here that this was an effort to keep momentum for the bill going, and keep pressure on senators who may be wavering. Not only do they have a weak coalition of Republican supporters, they also have left-leaning groups like the AFL-CIO and the ACLU pressuring Democrats not to support the ban on so-called "soft money" political donations.

According to a new report from the Center for Responsive Politics, Republicans and Democrats essentially ran even in soft money donations during the last election cycle, with the GOP taking $244 million to the Democrats' $243 million. But Republicans far out-raised their partisan opponents in hard money, raking in more than $447 million to the Democrats' $270 million. In a statement Monday, CRP's Holly Bailey said the report has caused some Democrats "to worry that without soft money, they will not be able to financially compete in future elections," and this may erode support for McCain-Feingold.

McCain also has his problems with Bush. The new president doesn't seem eager to let bygones be bygones. He's already doing his best to undercut a patients bill of rights pushed by McCain. Now, his chief strategist, Karl Rove, has reportedly been working on an alternative finance bill with Sen. Chuck Hagel, R-Neb., that could derail McCain-Feingold -- and, potentially, the issue altogether.

A couple of other interesting subplots were brewing during this show. California's Republican Secretary of State Bill Jones (who endorsed McCain in last year's presidential primary) made an appearance, parking spokesman Alfie Charles alongside the handful of reporters huddled in the back of the ballroom. Jones is expected to make a decision about the California governor's race in one to two weeks, Charles said, and when he makes his candidacy official, campaign finance reform is sure to be one of the linchpins of his campaign pitch.

That's because Democratic Gov. Gray Davis has been a fundraising juggernaut, raising close to $27 million in his first two years in office. When asked about Davis' prolific fundraising, Feingold said, "It's just sad that the political system has become one [in which] candidates are evaluated on the basis of whether they have a whole lot of money or can raise a lot of money." Davis was just named chairman of the Democratic Governors' Association, and is often mentioned as a possible White House contender in 2004, in part because of his money-gathering prowess. Late last week, McCain called Davis' fundraising "disgraceful."

After the event, McCain was mobbed by autograph seekers who brought copies of his book or old photos to be signed, and it led to an atmosphere much like last year's "Straight Talk" campaign. Like his failed primary run, the success of McCain-Feingold seems to rest squarely on the charisma of McCain. And as in the primary, his biggest opposition may be Bush, who is also touring the country building support. Only this time, with an impressive White House press corps following his every move, Bush finally has the media advantage.