Can dry humping get me pregnant?

According to sex-advice columnists Americans today aren't much better informed than their grandparents were. First of two parts. 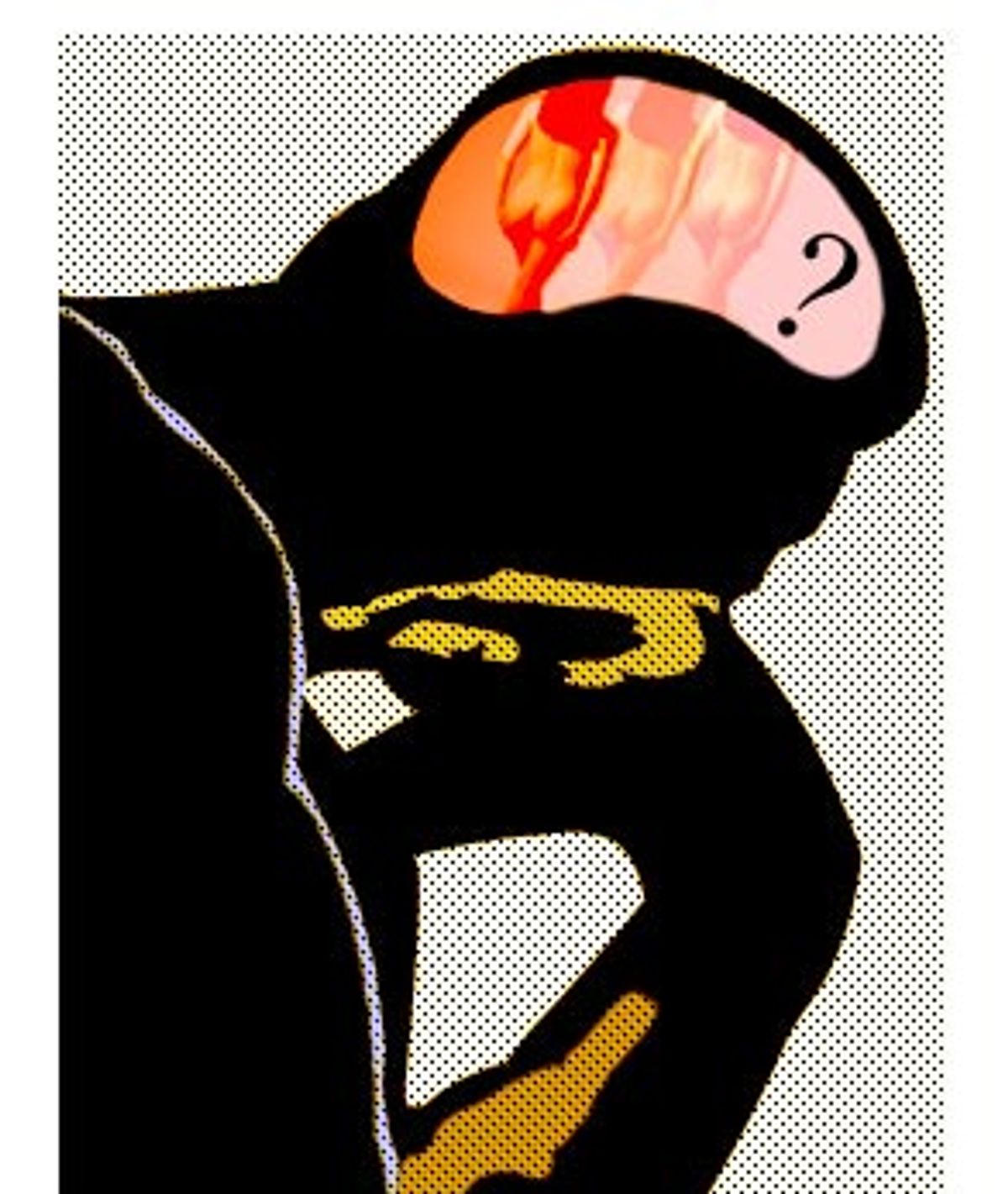 "Why do I sneeze after orgasm? I don't have allergies. Am I allergic to orgasm?"

"Are there any products that can keep my nipples erect? I sometimes like the look of my erect nipples showing through my clothing. What do you suggest besides ice cubes?"

These are just some of the thousands of questions the nation's sex advice columnists receive every month. Chip Rowe, who writes the Advisor column in Playboy, fields some 500 a month. He and two colleagues answer every one of them and select about a dozen for publication in the magazine and on the Playboy Advisor Web site. Louanne Weston, a sex therapist in Fair Oaks, Calif., gets 1,500 questions a month as the Sex Matters advice columnist for OnHealth.com (recently acquired by WebMD). San Francsico sexuality authority Sandor Gardos receives 2,500 questions a week as the sex advice columnist for Thriveonline/Oxygen. That's 10,000 a month. "Answering sex questions is a dirty job," Playboy's Rowe says, "but someone has to do it."

Answering sex questions is also a job fraught with mixed emotions -- chief among them, feelings of being overwhelmed and profound sadness at the sexual ignorance apparent in so many letters. "Sometimes I feel like I'm buried under an avalanche," Weston sighs. "I open my e-mail and I typically have 2,000 to 3,000 messages waiting. I often wonder if anyone out there knows how to have good sex. Sometimes I feel crushed under the weight of people's ignorance and misery."

You'd expect people who write to sex columnists to have sexual questions and problems. They're a self-selected group. People who don't have sexual issues don't write. But a staggeringly large number of people do write. And the questions they ask, often tinged with desperation, suggest that 30 years after the so-called sexual revolution -- the sexual frankness triggered by the Pill, the women's movement, gay liberation, general acceptance of premarital sex, the popularization of oral sex, record numbers of sexually transmitted diseases and greater availability of sex media -- Americans are no better informed about sex and no happier in bed than their parents or grandparents were.

"I feel so sorry for so many of the people who write me," says Isadora Alman, a San Francisco sex therapist and, since 1984, author of the Ask Isadora sex advice column, which runs in 16 alternative weeklies around the country. Alman also operates the online Sexuality Forum. "It's so sad when people feel the only place they can turn to is a sex advice column, and it's sadder still because I can't answer most questions that get submitted. There are way too many, and I can only publish a relative few."

The great sadness that sex advice columnists feel is mixed with incredulity that has them rolling their eyes in disbelief: "I'm often shocked at the level of cluelessness out there," says Gardos, who is also the sexuality guide for About.com. "The people who write me are educated and affluent enough to have computers with Web access. But many of them are phenomenally ignorant about the most basic aspects of sexuality."

"Every month," Rowe says, "people whose writing style makes me think they're adults ask questions about things I learned in junior high. Sometimes I think: 'How can people be so dumb? Why are they asking such basic questions?'"

Gardos has also been inundated with "could I be pregnant" questions: "I've heard everything imaginable," he sighs. "'Can dry humping get me pregnant? We both had our pants on, but he came and his pants got wet and his wet spot touched my pants.'" Women have also written Gardos asking: "Can I get pregnant if a guy ejaculates near me in a swimming pool?" Gardos' reply: "No. Sperm can't travel very far, and chlorine kills them. To get you pregnant, sperm have to be deposited directly into your vagina." End of story ... or so Gardos thought. "Recently," he recalls, "I got e-mail arguing with me, saying, 'You're wrong, dumbass. I know women who have gotten pregnant after a guy came in a pool near them.' I was astonished. People seem to think that sperm travel like the flu virus. All a woman has to do is get near sperm and, wham, she's pregnant."

One might think that sex advice columnists, after digesting the umpteenth question any literate person could get answered at most libraries or bookstores, spend a lot of time gnashing their teeth in exasperation. On the contrary, they are surprisingly philosophical about the epidemic of sexual ignorance.

"I never put anyone down for the questions they ask," Rowe explains. "I don't want to discourage any readers from writing."

"People are entitled to their ignorance," Alman says. "Most people who are experts at anything get asked the same questions over and over all the time. I'm sure that tennis instructors, auto mechanics, real estate agents -- you name it -- all have their 'top 10' most frequently asked questions, some of which are probably pretty basic. The difference with sex questions is that so many people are so reluctant to ask people they know that they feel they have to write to an advice column instead."

Alman sympathizes with sexual ignorance because she's been there: "I was unhappily married in the 1960s. Why? In part, because I wanted sex more often than my husband did. I'd never heard of another woman in that situation. All the popular mythology dealt only with her headache, never his. I was convinced I was the only person in the world with that dilemma. Now, I was a college graduate; I felt comfortable in libraries. But I had no idea where to look for information about my situation. Yes, there's a tremendous amount of sex information out there, but the access is harder than you might think."

Why is access to solid information so difficult? Sex advice columnists hardly have enough fingers to point to all the reasons. "I blame the government for funding abstinence-only sex education," Rowe declares. "I blame the bluenoses for keeping sexuality material out of public libraries. I blame parents who don't talk to their kids about sex. And I blame AIDS. I came of age in the 1980s, and AIDS was all we talked about in sex ed. The message was: Sex is deadly, so don't do it. All the political conservatives seem to think that if they keep people ignorant about sex, no one will do it. Of course, that's absurd."

"I sometimes feel exasperated at my own generation," Weston says. "Today's parents grew up when I did in the 1960s and 1970s, the time of the sexual revolution, when everyone was supposed to become more open, more informed, about sex. Only they didn't. Parents have not done their job."

"Personally, I'm angry at the media," Alman says. "The media gives us nonstop sexual titillation, but doesn't address many real sexual issues. Take the issue of penis size: Any credible sexuality authority will say that the vast majority of men are within the normal range, that the vast majority of women don't care about a man's size, that a man's size has nothing to do with his skill as a lover and that there's nothing a man can do safely to make his dick bigger. But these messages don't get out there. Instead, we have all sorts of size jokes on TV and size references in popular songs, with the media in general supporting the idea that bigger is better. Popular culture is incorrigible."

Some people consider Playboy part of the media problem. Feminist Patricia Gagne, an associate professor of sociology at the University of Louisville in Kentucky, did. A few years ago, she couldn't believe it when her colleague James Beggan, an associate professor of psychology, said he thought Playboy's Advisor column provided good information and was not at all misogynist. They argued about it, and decided to settle the matter by analyzing all 7,000 questions and answers the Advisor had published from its inception in 1960 through 1997. Last fall, the Journal of Men's Studies published their joint conclusions: The Advisor provides authoritative information that encourages men to respect women and treat them as equal partners in relationships.

Part 2: "We live in a culture obsessed with sex."