Surprise! The book everyone is reading and loving stars a stocky, funny-looking hero with four legs -- the champion racehorse Seabiscuit. 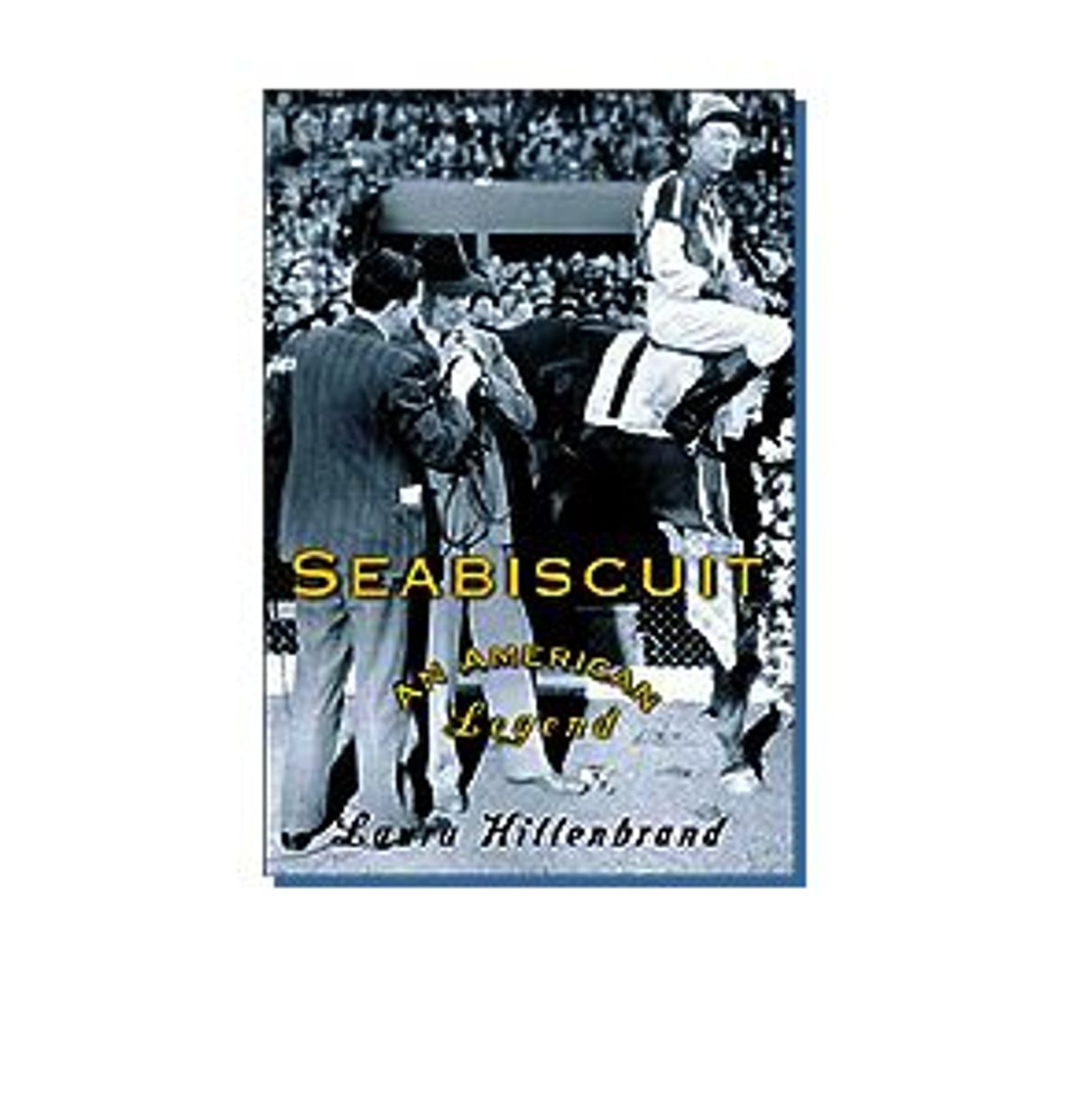 Ideally, you wouldn't just find Laura Hillenbrand's "Seabiscuit: An American Legend" in bookstores. It would be next to Frank Sinatra or Nat King Cole or Lee Wiley CDs as well -- anywhere you'd go to look for love songs.

The music that arises from the pages of "Seabiscuit" may be from the past, but it's no less sweet or clear. "Seabiscuit" not only records the love song of three men -- owner, trainer and jockey -- for an oddly shaped horse who possessed potential visible only to them. The book itself is also Hillenbrand's love song for those men and for the magnificent creature himself, who became something like the familiar of his human companions, a protective spirit in the face of ridiculous odds and cruel luck.

Charles Howard, the first to enter the picture in "Seabiscuit," thrived on bad odds. The bicycle repair shop he opened in 1903 San Francisco bloomed into a Buick dealership after Howard began servicing the few autos that existed in the city. He made his fortune in the aftermath of the city's catastrophic 1906 earthquake, when automobiles ceased being novelties and became the only possible means of transporting the dead and injured. The combination of the money he accumulated and the need to find an escape after the death of a beloved son led Howard to thoroughbred racing, and eventually to Tom Smith.

Smith, the genuine version of the sort of character Cormac McCarthy fakes, was a man who bridged two epochs, having gone from being a young plainsman in the frontier days of the American West to training horses for the British cavalry in the Boer War to training horses for rodeos and races. Taciturn to the point of utter silence, Smith did his talking to horses, whom he believed could be communicated with if you just bothered to observe them. He became known as a healer as much as a trainer, mending hurt horses with his homemade liniments and, seemingly, the empathy of his touch.

Hired by Howard to be his trainer in 1934, and with the tycoon's money at his disposal, Smith nevertheless preferred taking on horses that were considered bargains -- not as a way to save money, but because those animals' talents were overlooked. He found what he was looking for when he encountered Seabiscuit in 1936 at Suffolk Downs racetrack outside Boston.

Seabiscuit was descended from the legendary Man o' War and possessed the temperamental imperiousness of all that great horse's offspring. But he also looked like everything a racehorse shouldn't be: square, squat, inclined to portliness, low to the ground with short legs and knees that didn't straighten, and a racing gait so strange that his hind hoof often whacked his front ankle while he was running. Something in Smith told him he had a find; maybe he'd picked up on the hauteur he later claimed radiated from the animal.

Even more necessary than the understanding between trainer and horse is the symbiosis between horse and rider. And it was Smith who brought in Red Pollard, a down-on-his-luck jockey whom he'd run across earlier. Smith decided that Pollard was the man to ride Seabiscuit.

There's no denying that part of the appeal of "Seabiscuit" is its old-fashioned quality. There's the aw-shucks story of how Smith chose Pollard -- a choice made, Hillenbrand says, when the trainer introduced horse to jockey and Pollard produced a lump of sugar from his pocket. There's the book's endearingly retro language. (One chapter, quoting a sportswriter of the time, is called "The Dingbustingest Contest You Ever Clapped Eyes On.") And there's the heart-tugging account of how Seabiscuit's incredible fame was a respite for a Depression-weary country. (The horse was the most frequently mentioned news personality of 1938, beating out even FDR and Hitler.) But evoking the past is not the same thing as nostalgia. No one is likely to long for the world Hillenbrand describes, a world of horses raced to the point of exhaustion or worse on small-time racing circuits.

The horrors Hillenbrand describes jockeys enduring are even more awful: starvation diets, purgatives, summertime jogging in rubber suits, even the last resort of swallowing a tapeworm's egg. And even those horrors pale when she gets to the jockeys who were killed or injured in the sport. These men destroyed their bodies for the sake of a sport that paid them little, often kept them in slave conditions and gave them no insurance. Pollard was lucky enough to work for a man who considered him family. It was the charity of Howard and his wife, Marcella, that rescued Pollard when, in a horrendous accident, a horse fell on him during a race and crushed his chest. And it was Pollard's friend George Woolf who took his place atop Seabiscuit for some of the horse's victories.

But for a story whose appeal is basically one of winning against the odds, "Seabiscuit" never gathers itself up into a phony, olden-days coziness. Howard, Smith, Pollard and even Seabiscuit are given the chance to act as if their fate were not predetermined -- an unusual gift for characters who populate a legend. Hillenbrand allows them to breathe. She has an astounding eye for detail: The stories of the races in which Seabiscuit shattered speed records are turned into infinities where the possibilities of winning or losing reveal themselves in infinitesimal increments. These passages are almost unbearably suspenseful.

Hillenbrand also has a good sense of what to leave out, which may account for the book's near-perfect pacing and length. Introducing her human characters, Hillenbrand doesn't, thank goodness, waste any space on the begats, those snoozer passages that you have to endure in biographies and histories when you just want to get to the story. Seabiscuit's heritage gets more attention than anyone else's, and that's just as it should be.

If you're crazy about animals, part of the reason to love this wonderful book is obvious. Without sentimentality or anthropomorphism, Hillenbrand writes of an animal's intelligence and character. (Seabiscuit was the slyest of horses. His favorite trick, when he enjoyed the lead in a race, was to slow down just enough to allow his closest competitor to catch up with him. Then, giving the other horse just enough time to taste a chance of victory, Seabiscuit would issue a dismissive snort and leave his rival in the dust.)

The heart of its appeal, though, is its seamless combination of triumph and melancholy. Like any great success story, "Seabiscuit" is ultimately sad. Glory always burns brightly and briefly, and the racing life of a horse (and Seabiscuit's was longer than most) is even briefer than most kinds of success. We're always aware that the colt's victories are keeping something at bay. And so it's when he's retired, and the principals go their separate ways, that the book becomes most like a love song, reveling in the exquisite sadness of knowing you held something in your hands only to see it scatter to the winds.