As the Ken doll turns 40, let us not forget 3M Transparent Tape! 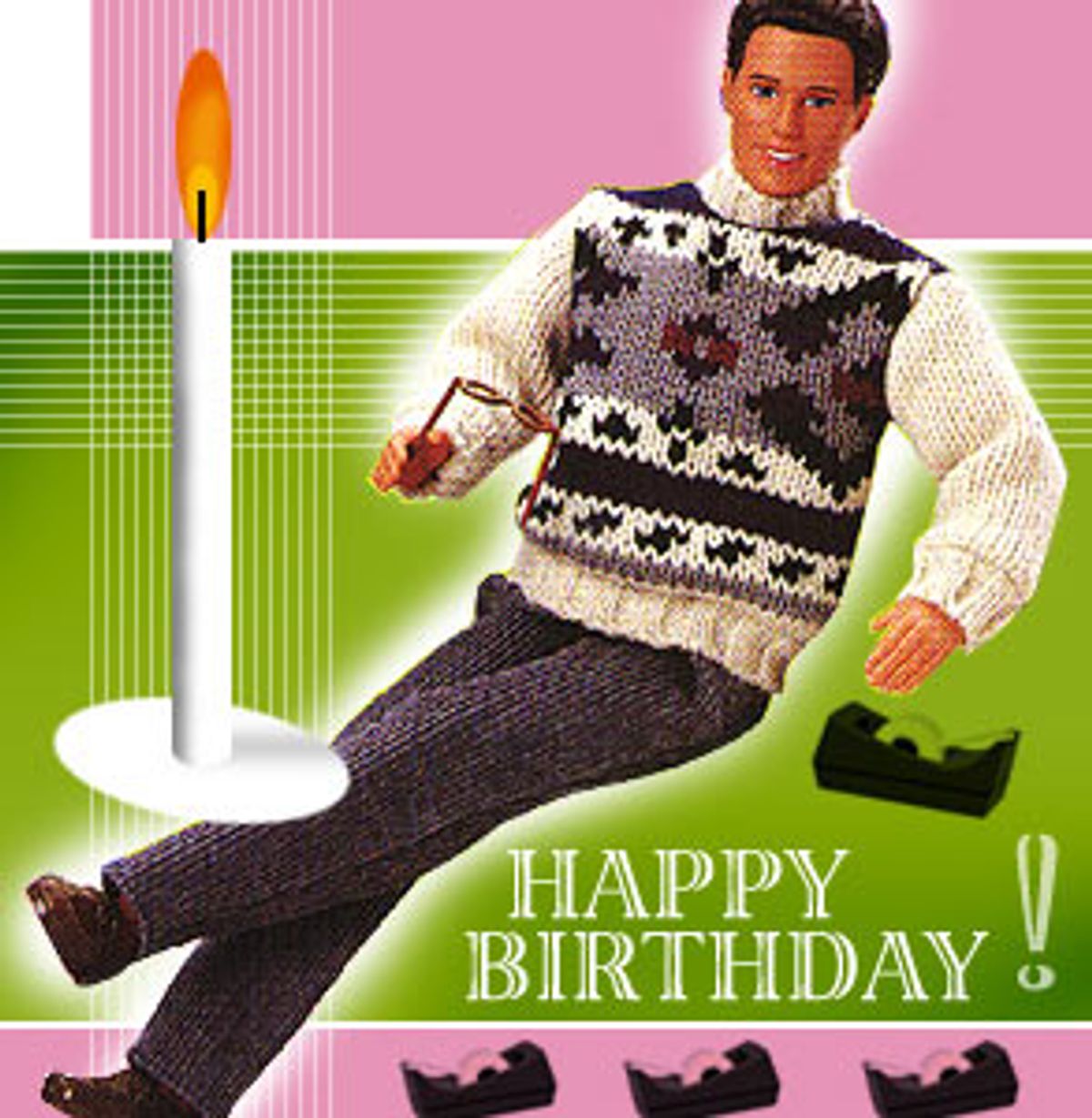 Mattel's Ken doll is now middle-aged -- he turned 40 on Tuesday. When Barbara Millicent Roberts (aka Barbie) first acquired her 12-inch permanent boyfriend -- who's named after the real-life son of her inventors, Ruth and Elliot Handler -- the Soviet Union was putting the first man in space.

Ken's full birth name was Ken Carson, and his crew cut fell off in water. So, in 1962, Mattel changed Ken's hair from flocked to molded and painted. That solved the problem. The year after that, he started looking scrawny, so Mattel beefed him up. Later he developed a groin mound.

Since then, Ken's looks and interests have gone through many updates. His various personalities over the years -- Animal Lovin' Ken, Cool Lookin' Ken, Dr. Ken, Busy Ken, Harley Davidson Ken -- always make for a good reading, or at least a sigh, and the extensiveness of the list is well suited for collectors and culture critics alike. Both camps know every detail, down to the shoes: cork sandals, ankle boots, cowboy boots, dance oxfords, lace-up oxfords, loafers, sandals, tennis shoes and Topsiders have all covered Ken's handsome, albeit small, feet at one time or another.

Those who see Ken as metaphor get to haul out their theories on an anniversary like this. His flawless looks create unrealistic expectations, says relationship coach Paige Grant in a recent Wireless Flash news story. (The opposite, in fact, is true. A quick look around any urban or suburban space will reveal that, among North America's youngish and white, all men do look more or less like Ken.)

The collectors don't haul anything out but photos. Here is Ski Champion Ken. Here is Perfume Giving Ken. Here, even, is the famous Earring Magic Ken. If the collectors have ideas about their little friend's significance, they stopped sharing those a long time ago. Maybe they find Ken theory facile, and maybe they're just too busy blowing up miniature balloons.

For every birthday blowout, there's another birthday around the same time, clumsily passed over as it stands in the corner and says nothing. The nice thing about 3M Transparent Tape's 40th, also celebrated this year, is that it can be enjoyed on only one level. If there are Scotch tape collectors or Scotch tape theorists out there, well, there just aren't. When people talk about tape, they pretty much talk about how sticky it is.

What happened 40 years ago, back when Ken was wearing cork sandals, was the perfection of the tape we use today. Perfection entailed finally eliminating discoloration and leakage. What was perfected that year had actually been invented even earlier, in 1925, by a banjo player in Minnesota.

3M was a sandpaper manufacturer then, and Richard Drew had a job testing one of its sandpapers at auto shops. Two-tone paint jobs were in vogue, and Drew noticed the auto shops were having a bit of masking trouble at the point on the car where one color met another.

Drew went to 3M, reported the problem and returned to the auto shops with a strip of two-inch-wide paper, its edges treated with adhesive. It was the first masking tape, and it promptly fell off the car it had been stuck to.

"Take this tape back to those Scotch bosses of yours and tell them to put more adhesive on it," an auto painter barked, using "Scotch" to mean "cheap." The nickname, as 3M likes to quip, stuck. Five years later, in 1930, Drew invented Scotch Brand Cellulose Tape, the first transparent tape. By the time the non-leaking, non-discoloring version finally appeared in 1961, Drew had died.

Kids don't dress Scotch tape up in a blazer and send it on a date with Barbie. There's no Malibu Tape, or Exercise Tape, or Perfume Giving Tape. Still, tape has its resonances, and, like Ken, we can do with it whatever we want. It may not prepare young girls for the marriage track, but then again, its hair doesn't fall off in water.