Bush's blatant flip-flip on carbon dioxide pollution has even some GOP stalwarts holding their noses. 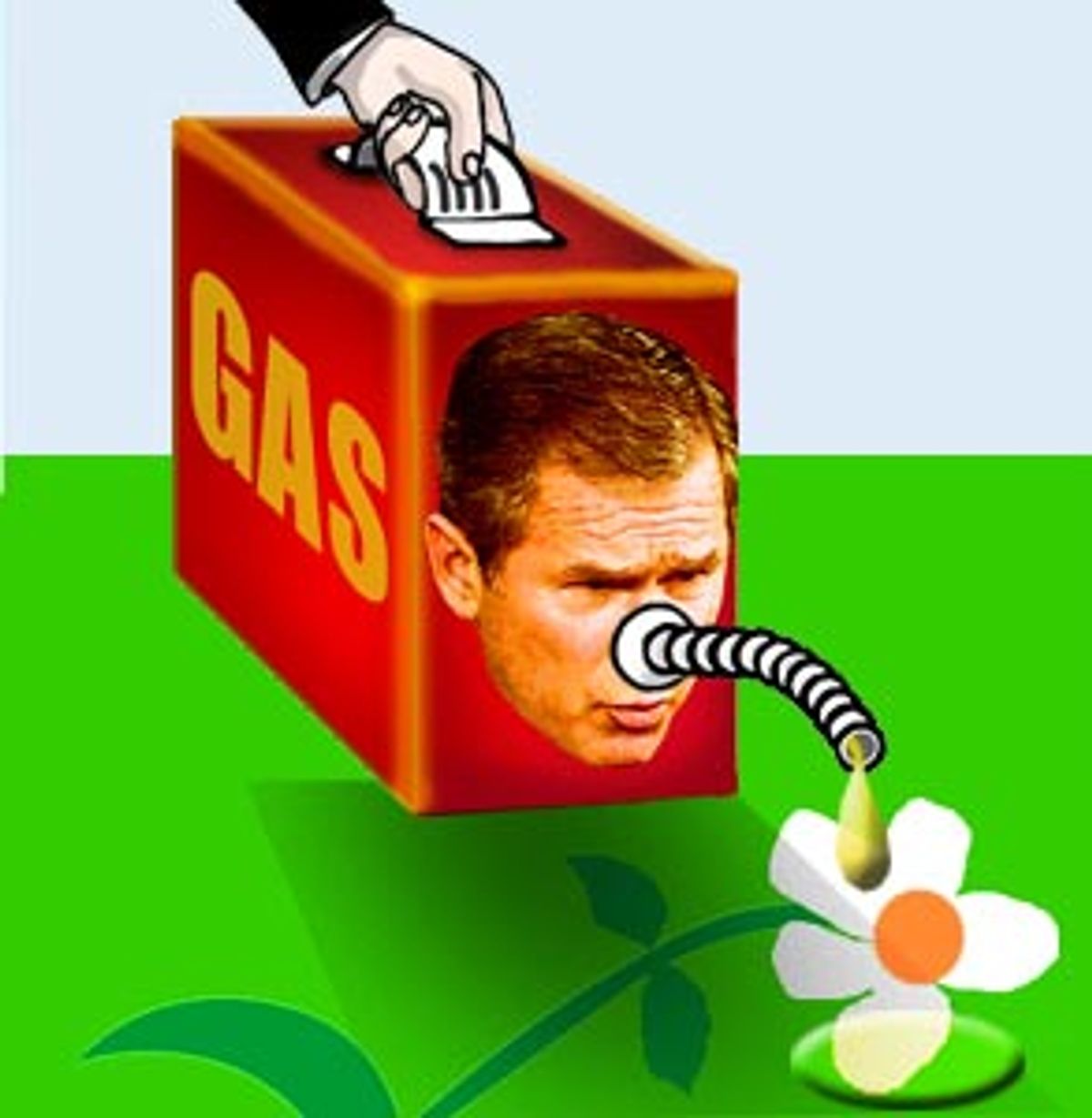 But the move was a big hit with conservatives and energy industry supporters, who had declared war against efforts to restrict the emissions, which are believed to contribute to global warming.

"The reversal seems to suggest that the uproar that this policy caused on the right was greater than Bush had anticipated," says Jerry Taylor, director of natural resources and environmental studies at the conservative Cato Institute. "But there's not likely to be much of a political cost. The average American probably didn't even know that Bush had made the promise to unilaterally reduce greenhouse gas emissions."

The move is particularly embarrassing for Whitman, who told the G-8 Environment Summit in Trieste, Italy, earlier this month that the administration was committed to reducing CO2 emissions, to rousing cheers from Eurocrats. Now, Bush's about-face has revived European leaders' concerns about the future of the global environmental agreement made in Kyoto, Japan, in 1997. European Union leaders issued a statement Wednesday expressing "deep concern" about Bush's change of heart, and many plan to go ahead with the Kyoto Accords without the participation of the United States.

When Bush appointed Whitman, moderates were heartened by his choice of the pro-choice New Jersey governor for his Cabinet. She has broken with GOP orthodoxy on environmental issues in the past, calling global warming "a real phenomenon," a dramatic departure from the Republican Party line that still claims the idea of global warming is based on fuzzy science. But conservatives have grown increasingly unhappy with her: The New York Times reported this week that the Greening Earth Society, a coal-industry group, sent an e-mail message to Congress calling her "Christie Todd Browner," a reference to Clinton administration EPA chief Carol Browner.

On Wednesday, a spokesman for Whitman issued an abrupt statement saying the EPA chief would defer to the president. Speaking to a group of senators, Cheney, who is spearheading the administration's task force on energy policy, called Whitman "a good soldier."

While most of the political venom was spewed by Democrats Wednesday, several of Bush's fellow Republicans expressed "disappointment" in the president.

"While I applaud President Bush for maintaining his position of requiring all power plants to meet clear air standards ... it is extremely disappointing that he has dropped one of the most important elements off that list," said Sen. Susan Collins, R-Maine. "I have no intention of doing the same." Collins said she plans to proceed with her plan to introduce a bill targeting CO2 emissions from power plants.

The president's reversal was a huge victory for the coal industry, which would have been hurt most by new emissions standards. Coal is the nation's cheapest and most abundant fuel, but also one of the dirtiest when it comes to emissions. New standards would likely have led to a transition away from coal-fired plants. Supporters of the president's new position say a move away from coal, while offering cleaner energy, would have led to a spike in energy prices. According to numbers of the Center for Responsive Politics, the coal mining industry gave more than $3.8 million in political contributions during the last election cycle. About $3.4 million of that money went to Republicans.

Steve Brash, spokesman for Cinergy Corp., one of the largest power suppliers in the Midwest, applauded the president's revised position.

"We agree with the president that mandatory CO2 reduction targets are not necessary or appropriate at this time," he said. "We do believe that we need to start considering what steps should be taken on CO2, but that it should not be considered a criteria pollutant as sulfur dioxide and nitrogen oxide are."

Of course, Democrats rushed to criticize the president's reversal -- even though Al Gore had backed only voluntary emissions controls. "We now know that when it comes to the environment, George W. Bush will say one thing and do another, to the detriment of America's families," Democratic National Committee chairman Terry McAuliffe said in a statement Wednesday. Rep. Henry Waxman, D-Calif., called it "a breathtaking betrayal."

"The administration has sadly flip-flopped, apparently under intense pressure from special interests aligned against this initiative," said Gore's vice presidential pick, Sen. Joseph Lieberman, D-Conn. "This is about much more than broken campaign promises and political doubletalk. In this case, turnabout is foul play, and could seriously hurt our efforts to reduce the enormously consequential risks of rising planetary temperatures."

The Intergovernmental Panel on Climate Change's recent report on global warming estimates that the Earth's temperature could increase up to 10.4 degrees Fahrenheit over the next 100 years.

Bush's reversal came in the form of a letter sent Monday to four Republican senators who had asked for clarification of the administration's views on carbon dioxide emissions.

"Any such strategy would include phasing in reductions over a reasonable period of time," the letter states. "I do not believe, however, that the government should impose on power plants mandatory emissions reductions for carbon dioxide."

That statement is a direct contradiction of a position paper put out in the heat of last fall's presidential campaign. In a Sept. 29 position paper, Bush said he would introduce legislation to "establish mandatory reduction targets for emissions of four main pollutants: sulfur dioxide, nitrogen oxide, mercury and carbon dioxide."

Bush tried to explain his backtracking in the letter to the senators, citing a "recently released" report from the Department of Energy that concluded that the proposed limits on CO2 emissions could lead to a spike in energy prices.

"This is important new information that warrants a reevaluation, especially at a time of rising energy prices and a serious energy shortage," Bush's letter states. But the DOE report was released last December, giving the president more than enough time to change his position before Whitman marched off to Trieste.

Dan Lashof, senior scientist with the Natural Resources Defense Council, blasted the report. "The DOE itself issued a report last fall called "Scenarios for a Cleaner Energy Future," which reaches an opposite conclusion."

"What's clear to us is that President Bush doesn't have all the facts on the economics of electricity in the United States," says Jennifer Morgan, director of the World Wildlife Fund's Climate Change Campaign. "There are many studies, and he cites one that is quite flawed."

Republican environmentalists also took Bush to task. "We're really disappointed in the president," said Martha Marks, president of Republicans for Environmental Protection. "Obviously, we were trusting he would live up to his campaign promise, but it seems like the wrong forces or the anti-environmental forces inside his administration are prevailing."

Members of a dozen environmental groups staged an ad hoc protest in front of the White House Wednesday, a surefire sign of things to come. "This is going to be a protracted war," said Kert Davies, director of the global warming project at Greenpeace. "I believe they made a fatal mistake. There's too much agreement on the Hill on the fact that we need to do something about carbon dioxide."

But environmentalists give Bush credit for one thing: They say his presidency has been good for their movement. "We've seen a strong spike upwards in membership after the [Gale] Norton nomination and it really hasn't stopped," said Marks. "We've had several hundred more members sign up in the last two months. Maybe as many as 1,000."

Greenpeace executive director John Passacantando also grasped for the silver lining. "The good news is if Bush is not planning on doing anything real about solving global warming, it's a blessing that he's not smart enough to use green rhetoric. What he's done here is very honest: He told the American public how bad he's going to be on global warming."

(Alicia Montgomery contributed to this story.)