A team of valiant friends tackles James Joyce's magnum opus, and one winds up in family court because of it. 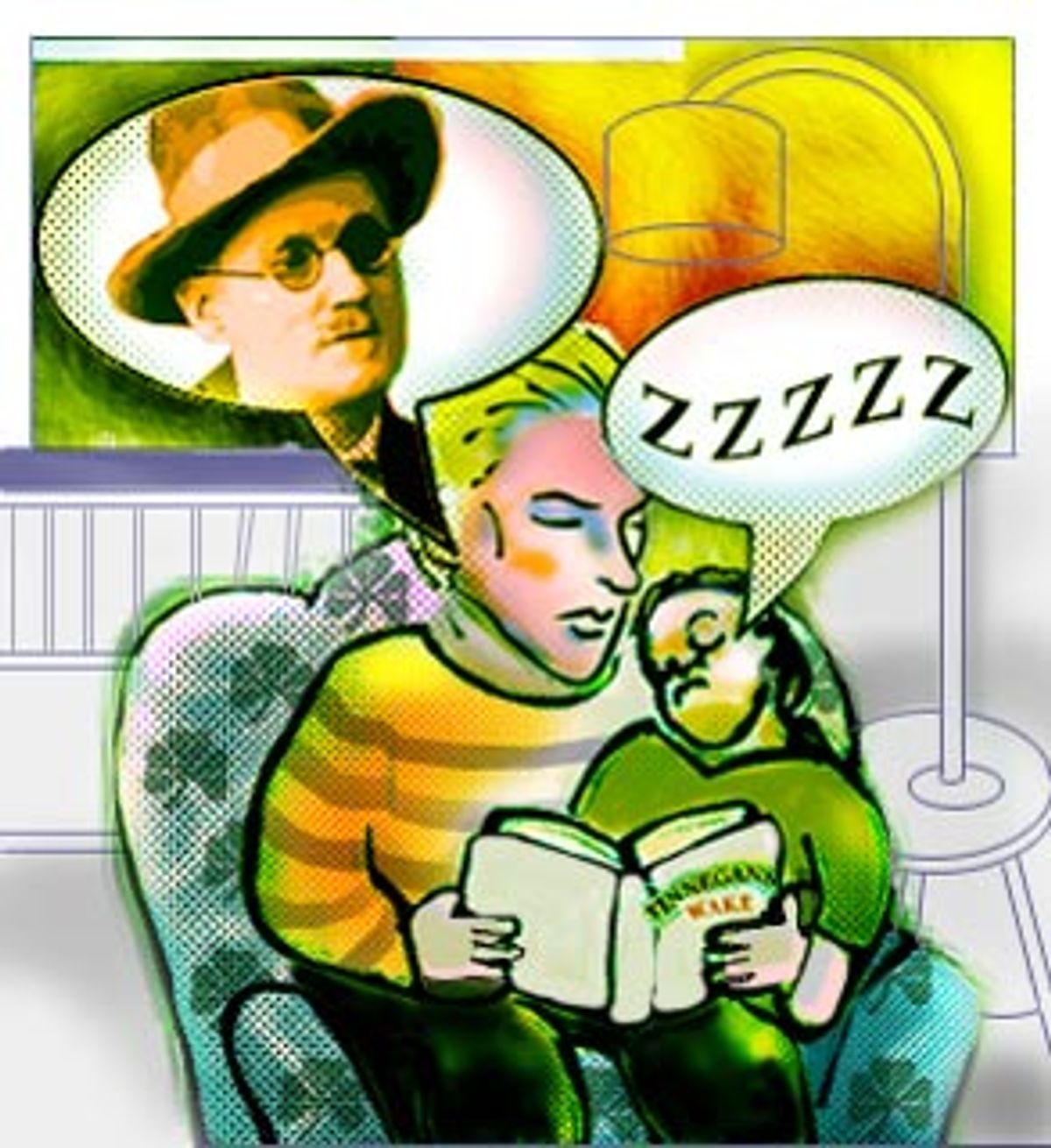 My friend Bill and I have similarly decorated refrigerators. Secured by magnets along with our daughters' class photos and best school papers are pictures of James Joyce, on postcards or cut from magazines. Our children share the refrigerator shrine with Joyce because both Bill and I are rather proud of having read every one of his published works. Well, that's with the exception of "Finnegans Wake." We always figured we would get around to it someday.

Just before St. Patrick's Day 1999, Bill decided that the time had come. He called together about a dozen Joyce enthusiasts, literary types and well-rounded scholars. We were determined to pool our considerable intellectual resources and, as a committee, actually read the formidable tome.

At that first meeting we began by taking turns reading aloud the first of the 628 pages. Only a few people had brought along copies of the book, but by the next meeting we were better prepared. After struggling through those first seemingly unintelligible pages, we had come to realize that reading "Finnegans Wake" without assistance was akin to crossing the Sahara without a camel. In addition to personal copies of the novel, each of us hauled in a veritable reference library, which we spread before us like winning poker hands.

We all had copies of "A Skeleton Key to Finnegans Wake," the classic 1944 study by Joseph Campbell and Henry Morton Robinson, and "A Reader's Guide to Finnegans Wake" by William York Tindall. It was fortifying to read in the introduction to Tindall's 1969 guide that he had based his work on the achievement of his own "Finnegans Wake" reading group of fellow Columbia University graduate students, formed just one year after the book's 1939 publication. If they could muddle through it, without even the invaluable "Skeleton Key" to help them, then by golly, so could we.

We began with the same resolute spirit displayed by Stephen Dedalus at the end of "A Portrait of the Artist as a Young Man." We felt we were doing a noble and brave thing, though we never dared to compare ourselves to the Wake's first readers. To our mind they were just as courageous as the first people who ever tried eating lobster.

We went round and round about Giambattista Vico and Giordano Bruno, bygone philosophers whose theories served as the framework for the Wake, much as Homer's "The Odyssey" had for "Ulysses." We expounded upon the nocturnal, dreamlike nature of "Finnegans Wake," as opposed to the waking moments of Leopold Bloom et al., described in "Ulysses." With the help of my handy guide, Roland McHugh's "Annotations to Finnegans Wake," which explicates the book almost word by word, we sorted through some of the many layers of meaning woven into the Joycean myth of Everyman/Finnegan.

After we'd been meeting every few weeks for two months, we felt so confident of our growing understanding of Joyce's magnum opus that we engaged in a rousing game of "Finnegans Wake" charades. We divided into teams and drew from a hat snippets of language from the early chapters. We took turns acting out the expressions while the others guessed. Mine was easy enough: Phoenix Park. I mimicked a bird swooping up from the fireplace. Katy chose to illustrate the phrase "by a commodius vicus of recirculation" by pretending to sit on a toilet.

We solved each puzzle in minutes flat and felt ever so clever. I crowed, "I'll bet we're the only people in the world playing 'Finnegans Wake' charades right now!" We spent the rest of the evening in smug conversation about facets of "Finnegans Wake" while sipping from bottles of the Irish nectar Guinness stout.

By the next meeting the froth of our enthusiasm had begun to fizzle. Jeff admitted, "I'm thinking about getting rid of the book and just reading the guide." Chris protested: "But there are passages that seem to be about something!"

Bill made a valiant attempt to rekindle the group's waning interest. He talked about Joyce's (almost literally) blind dedication to his masterpiece for all of 17 years. Not even a series of painful and generally useless eye operations could keep him from his work. Bill said that for just one of the chapters in "Finnegans Wake" Joyce had compiled notes that filled a total of 47 notebooks! He said, "Joyce did his notebooks like a squirrel collecting nuts."

Even Joyce's own friends doubted the value of his monumental effort. When Ezra Pound commented on the manuscript, "I make nothing of it whatever," Joyce was so upset he collapsed on his couch in utter desolation. His patroness, Harriet Shaw Weaver, made a temporary invalid out of Joyce by writing, "I do not care much for the output from your Wholesale Safety Pun Factory nor for the darknesses and unintelligibilities of your deliberately entangled language system. It seems to me you are wasting your genius."

If Joyce were still alive, we really would have made him sick. Our band of feckless scholars fabricated mounting excuses for not doing the reading (and for not even showing up for the meetings!). We counted more dropouts each month, and frequently could get only a handful of people to agree on a meeting date.

Meanwhile, our leader was having problems of his own. Bill's ex-wife, with whom he shared custody of their 4-year-old daughter, learned from the child that each night before going night-night at her daddy's house, she was being treated to animated readings (complete with Irish accent) from James Joyce's "Finnegans Wake." Recalling that something Joyce wrote had once been considered obscene, she hauled Bill into court for being an unfit parent. On the witness stand Bill was asked, "Is it true that you read to your daughter from 'Finnegans Wake'?"

The lawyer gave the judge a knowing look. "And what does your daughter think of 'Finnegans Wake'?"

"She thinks it's boring."

The judge laughed. "I don't blame her," she said. "I thought it was boring, too!" Case closed.

By the end of January our group seemed to have come back to life, just like Finnegan himself. We were enjoying a spirited discussion of some obscure point when Bill protested, "I think we're barking up the wrong tree."

"No, no!" exclaimed Katherine. "There is no wrong tree!"

In that moment, the very essence of "Finnegans Wake" was revealed to us. To celebrate, we agreed to meet the next week at an Irish pub in honor of the brilliant artificer's birthday. But on Feb. 2, when I showed up at the pub, Elena was sitting alone, staring morosely at the creamy foam on her stout. No one else had bothered to come.

After St. Patrick's Day, our one-year anniversary, everyone but Bill had dropped out. Not even the fact that we'd managed to pass the book's halfway mark inspired further effort. I actually welcomed the respite from reading one novel and three or four reference books at one time. The others insisted they had better uses for their time. Bill seemed to be the only one who wasn't quite ready to give up.

Not long ago I saw his daughter, who is now 6. Remembering that "Finnegans Wake" was once her bedtime reading, I asked what she thought of the book. She rolled her eyes. "It's the worst story," she confided. "And the last sentence is the start of the first!"

So, Bill finished "Finnegans Wake" after all. Well, maybe the rest of us will get around to it someday.