Backwards told is thriller noir-art empty ultimately but compelling and intriguing this. 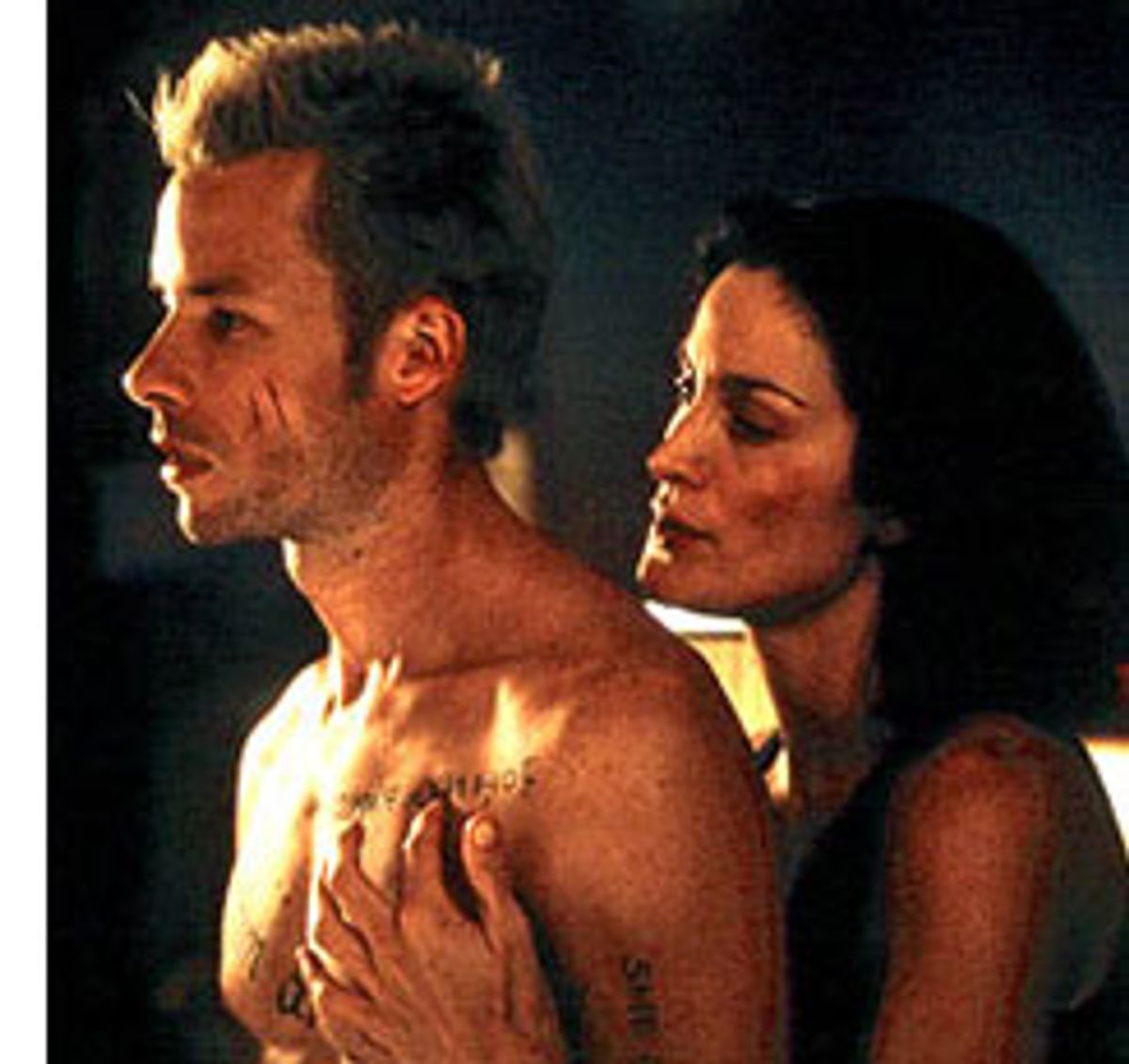 In the climax of the art-noir "Memento," Guy Pearce, as a man suffering short-term memory loss investigating the murder of his wife, kills Joe Pantoliano, playing his assistant, after coming to believe that Pantoliano is the real killer. Now before you howl that I've given the movie away I should tell you that all I've done is describe the first two or three minutes. The climax, you see, comes at the beginning, and that I can reveal it without having to worry about spoiling anything should give you an idea of just how much emotional involvement you can expect watching it.

Like Harold Pinter's "Betrayal" and Atom Egoyan's "Exotica," Christopher Nolan's "Memento" is told backwards, from end to beginning. There's no denying its cleverness. It's probably the cleverest use yet of that essentially stupid device. I've heard all sorts of arguments for reverse storytelling, the most frequent being that it allows you to watch a scene and the interactions of the characters without any preconceptions.

I don't buy it. There's something basically nonsensical about asking an audience to watch a scene without any of the background information or emotional history that would allow them to respond to what's going on. It might be wonderful for people who like to come in on the middle of movies, and it's a great way of discussing "tropes" and what have you, but as a way of telling a story it's a bust. "Memento" has gotten extraordinary advance reviews, and part of that praise is due no doubt to its being a puzzle movie. From "Last Year in Marienbad" on, puzzle movies have almost always been presumed to be hiding great depths. But by the time "Memento" disappears up its own existence, you might suspect that it's told backwards because telling it forwards would tip us off much sooner that it doesn't make a whole lot of sense.

For roughly the first hour, though, Nolan almost pulls it off. Since mysteries show us things before we can make sense of them, Nolan's method makes a kind of sense; he sustains our desire to see what happens at a low, steady simmer. His detective is Leonard Shelby (Pearce), a former insurance investigator whose short-term memory has been decimated since finding his wife raped and murdered. He can focus in chunks of about 15 minutes.

After that, no matter how many times he's met someone, it's as if he's meeting them for the first time. To help him remember, he takes Polaroids of people and places, with relevant information jotted down on the back. And he's turned his body into a giant memo pad, with the important clues he's discovered tattooed on his flesh. The catch, of course, is that he relies on any information that he's written down as gospel. He can't process anything he learns later on that might contradict it.

Nolan has structured the film in short bursts that are roughly equal to Leonard's attention span. We watch a scene, and then the next scene (which has actually taken place previous to what we've already seen) annotates what we just saw. The method offers a few genuine shocks, particularly in scenes involving Carrie-Anne Moss as a woman Leonard trusts because she too has lost someone to violence. (The problem is that the shocks involving her character also reduce the role to that noir cliché: the cunning, femme fatale bitch.) But for the most part the plot only gets more confusing as it opens up, and puts us in the position of feeling less and less sympathy for Pearce.

It's easy to spot the movies that Nolan is referencing here: John Boorman's "Point Blank" and Steven Soderbergh's "The Limey," with their fractured narratives and seedy views of Los Angeles. And unless I'm mistaken he's also taken time to study "Groundhog Day" with its constant repetition of scenes, each repetition adding something that advances the story.

Except that here, of course, the point is to retard the story. "Memento" isn't so much a shrinking closet as one of those old-fashioned reducing machines. Everything from your comprehension of the story to your interest in it shrinks as the picture goes on. And it seems to me that if the meaning and impact of a story depends solely on being cut up and rejiggered, that if telling it in the usual order would render it trite or prevent our having an emotional stake in it, then the material isn't very good to begin with.

If "Memento" were some sort of literary deconstruction about how, in detective stories, the quest is more important to the detective than solving the mystery, it would probably get top marks. You can watch Pearce tracking down his incomplete information, not even knowing who he's going after or even why and come up with a whole riff on the existential subtext of detective fiction, how it functions as a metaphor for going through the motions of everyday life. (The French will have a field day with it.)

But all that is cold comfort to an audience that's been promised a mystery with a solution. There is a solution, of sorts, but one that feels like a cheat because instead of being solved, the mystery evaporates before our eyes.

"Memento" might have postponed being revealed as a cold exercise if the filmmakers had cast someone other than Guy Pearce in the lead. All I could get from Pearce in "L.A. Confidential" was a stiff actor playing a dullard straight-arrow whose conflicts didn't go deep enough to seem interesting. Here, done up in a shock of spiky, dyed-blond hair and various creepy tattoos (designed, it would appear, after Robert De Niro in "Cape Fear"), he's a blank, not even a man tormentedly trying to recover his past. He's so affectless that being a blank seems what he aspires to. The loss of short-term memory is his fulfillment.

It's curious that after laying out such a meticulous puzzle, Christopher Nolan introduces the booby trap that detonates the surrounding material, namely Stephen Tobolowsky and Harriet Sansom Harris as the couple from an insurance investigation that haunts Pearce. Tobolowsky is a man who's unable to continue working when he develops the same short-term memory loss that Pearce eventually suffers from.

Pearce, working to save his company money, prevents Tobolowsky from getting covered for his ailment and the poor man's wife is left wondering whether her husband is faking. Harris captures the escalating desperation of someone trying to hold onto a normal life as the floor is kicked out from beneath her, and Tobolowsky gives perhaps his best performance. He's one of those actors whose face you know even if you don't recognize his name. He was the jeweler who deflects Annette Bening's advances in the most gentlemanly manner possible in "The Grifters"; he was one of the CBS lawyers working to kill Russell Crowe's "60 Minutes" appearance in "The Insider"; and he was Ned Ryerson, the insurance agent who kept pestering former classmate Bill Murray in "Groundhog Day."

With the fringe of hair around his bald head, and his big eyes and tall build, Tobolowsky could be Homer Simpson's basketball-playing cousin. He plays this role with the calm of a man who has entered the serenity of dementia; the lost, benign little smile on his face becomes more heartrending as the movie goes on. Whenever Harris or Tobolowsky come on-screen they stop "Memento" dead in its clever tracks. You want to tell Nolan to stop all the po-mo deconstructive game playing and pay attention to the two human beings in front of him.