Who needs the new economy? 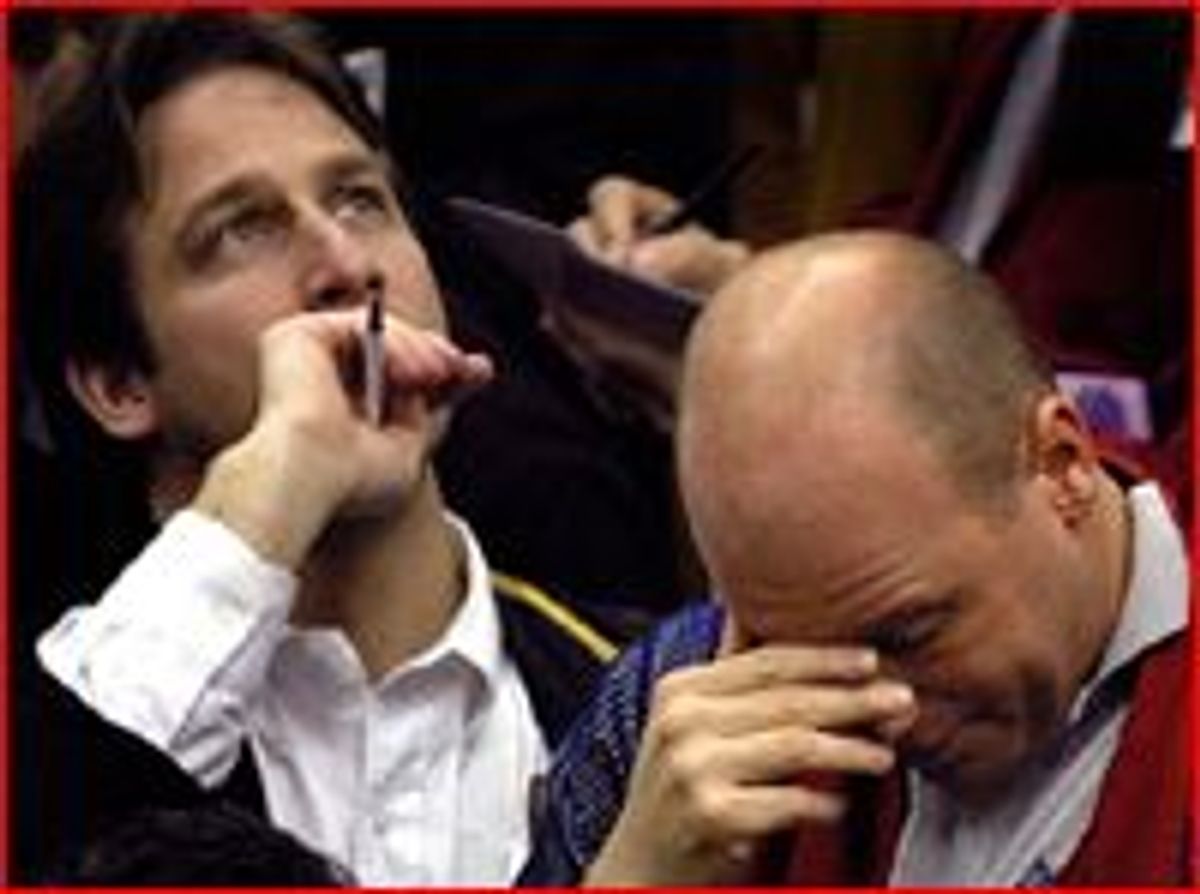 Ever since Deep Throat whispered "Follow the money" to Bob Woodward, journalists and pundits have been alert to the importance of money in U.S. politics. In the midst of the current economic downturn, however, they've been looking in the wrong direction.

Throughout the election year, while money in the stock market shivered at any hint of the GOP victory, media attention -- and campaign rhetoric -- continued to focus on Bush's trillions and Gore's lockboxes, fuzzy math calculations and proposed expenditure against still-unearned government surpluses. Even now, as the NASDAQ has plunged to less than 60 percent of last year's value, the pundits and the American public continue to place their economic hopes and fears on the congressional tax cut debates and Alan Greenspan's interest rate reductions.

Smart investors have anticipated the predictable changes in government spending patterns coming from the change of administration and placed their bets on the companies and sectors that are most likely to benefit from the Bush administration: defense, energy, tobacco. Meanwhile, entertainment and technology stocks, the pillars of both economic growth in the past decade and of the Democratic Party's campaign funds, are quickly crumbling in Wall Street.

Sectoral shifts of this magnitude cannot easily be offset with tax incentives and interest rate reductions. Paul Krugman has calculated that the negative wealth effect from the recent collapse in share prices will more than offset any plausible increase in consumption from George Bush's proposed tax cut.

So, what is actually going on in the stock market? The story is much less complicated than pundits would make us believe. Wall Street is simply following the trail of campaign contributions and electoral outcomes.

It's a cliché that the 2000 election revealed a country divided, but one division still rarely discussed is the widening sectoral gap between the old economy firms that favored the Republican Party and the new economy firms that favored the Democrats. During the 2000 presidential campaign (according to data from the Center for Responsive Politics and the Center for Public Integrity) around 80 percent of campaign contributions by oil, gas, agribusiness, automotive and tobacco firms went to Republicans, as did two-thirds of defense industry money. In contrast, money from the Hollywood entertainment complex, cable TV, toy companies and their associated California hardware and software firms went 3-to-2 to Gore and the Democrats.

Unlike the rest of their corporate peers, who on average gave 60 percent of their money to the GOP, computer and Internet firms gave less than half of their money to the Republicans. Equally telling, the only financial sector that favored the Democratic Party -- by almost a 3-to-2 margin -- was venture capital. Voting patterns have mirrored this corporate old economy-new economy split. Gore won about three-fourths of the highest-ranking states on the Milken Institute's index of high technology and education, and in the stereotypical new-economy counties of San Mateo and Santa Clara, Calif., he outpolled Bush 2-to-1. By contrast, Bush's heartland was rural America, where guns outnumber cellphones.

Investors have been pricing this old economy/new economy split into share prices ever since the primaries. While Wall Street voiced little enthusiasm at Bush's good performance in the polls last April, his selection of Dick Cheney as his running mate at the end of July, the well-mannered GOP Convention in early August and even the Supreme Court's ultimate decision in mid-December each triggered a sell-off of technology stocks and a gain for the stocks of GOP corporate supporters.

The smart money knows that the new GOP administration is likely to shower huge benefits on its corporate patrons, whose survival, after all, largely depends on either government largess or a relaxation of government oversight. Thus, during 2000, the market values of the defense, tobacco and oil firms that backed the GOP were buoyed by inflows of money. Meanwhile, shares of Democratic-leaning "new economy" firms on the technology-laden Nasdaq have lost roughly $1.8 trillion in value since Bush was declared a winner, and over $4 trillion since March 2000. Admittedly, many of these new economy start-ups were doomed from the beginning, but other, more legitimate businesses died when investors moved their money to Republican-friendly companies.

Examples of old-economy Republican-backed firms include defense giants Lockheed Martin, Raytheon, Martin Marietta, General Dynamics and Litton Industries, which have seen their stock prices increase by an average of 80 percent over the past year. In the same period, however, Democratic strongholds Time Warner, Disney, eBay, Viacom and Novell have lost between 12 and 80 percent of their stock market value. Even the mini-crash of this past Monday has not affected all sectors equally. As Byron Wien, a strategist at Morgan Stanley Dean Witter, told New York Times reporters, "The market's rise was concentrated in technology, and the market's destruction is concentrated there. A lot of old-economy stocks have done very well."

These shifting shares of market fortunes have real-life consequences. Overall economic growth comes from new investment, which creates new productive capacity and boosts productivity. The '90s boom was largely an investment-driven boom. Firms need capital to invest and grow, and they can only get capital three ways: by selling shares (equity), by borrowing or by retaining their profits.

During the '90s even the fluffiest of dot-coms could grow on the basis of almost costless issues of equities. They had to, because no respectable banker would lend them money and they had no profits to retain. At the same time, older, established telecommunications firms borrowed the money to build bandwidth. In between, solid technology firms producing the hardware and software powering the new economy grew on a mix of rising equities and retained profits. Now, the shift of investment away from the NASDAQ and toward defense and raw-materials firms will starve dot-coms and other information technology firms of equity finance. Lower interest rates won't help these firms invest, because the dot-coms still don't have the cash flow to justify loans, the hardware firms face shrinking cash flow as investment in information technology slows, and the telecoms are over-loaned.

The new economy has largely been responsible for long-term economic and productivity growth. Economic growth historically has come from productivity-enhancing innovation and the emergence of new growth sectors. During the Clinton years, commercialization of the defense industry through dual-technology programs may not have invented the Internet and wireless communication but it definitely helped construct a market for these technologies.

Similarly, government-stimulated convergence between the information-technology, telecommunications and entertainment industries may not have been solely responsible for the 1990s' virtuous circle of economic expansion, but it definitely attracted global capital into Wall Street. Chips, wires and the software that ties them together generated substantial productivity gains and gave the U.S. economy rapid growth and falling interest rates.

Productivity gains suppressed inflation, allowing the Federal Reserve to keep interest rates low. Low interest rates boosted employment and the stock market, creating enough new purchasing power to power the economy through nearly a decade of growth that validated investment in the less speculative parts of these new growth sectors. At the same time, taxes on capital gains created the surpluses that Bush now proposes to redistribute through his tax cuts.

The Fed's low-interest-rate policy rested on these tax revenues in two ways. First, these revenues reduced government borrowing in credit markets, depressing demand for funds and thus putting downward pressure on interest rates. Second, redemptions of government debt put more money back into credit markets, expanding the supply of funds and thus putting additional downward pressure on interest rates. For better or for worse, Bill Clinton understood that if he could tame the budget deficit, he would make Wall Street happy; and if he could make Wall Street happy, he could turn the economy around.

The Bush presidency is unlikely to see these kinds of virtuous circles. Despite the GOP's self-image as a party of entrepreneurs, it largely represents corporations run by private-sector bureaucrats living off the public budget or wielding massive market power in stagnant markets. These firms thrive on various forms of oligopolistic rent and cost-plus contracts, not entrepreneurial profit. Their productivity gains are likely to be measured in fractions of 1 percent, in contrast to the dynamism of the electronics-entertainment complex. Their contribution to growth comes from the consumption of nonrenewable materials rather than the materials-conserving pattern in the electronics industry.

Because this sector has lower productivity growth, a shift in cash and investment toward those industries will probably increase inflationary pressures in the economy. This means higher interest rates as the Fed will be forced to contain the inflationary combination of slower productivity growth and a fiscal stimulus composed of bigger defense budgets, more pork and a shrinking federal surplus.

Without substantial capital-gains tax revenues, the Fed will have to keep a closer eye on fiscally driven pressure for higher inflation. Although Bush wants to cripple government by cutting taxes, he also wants to spend more on defense, more on education, more on prescription drug benefits and more on programs to help his corporate patrons. Just as Paul Volcker had to keep interest rates high to offset Reagan's fiscal profligacy, Bush's impending deficits will force Greenspan to imitate his predecessor at the Fed and increase interest rates. This is why Greenspan has asked Bush to make his tax cuts contingent on real, not imaginary surpluses.

The tax cut debate is, therefore, a highly entertaining sideshow diverting individual taxpayers' attention away from the GOP's old-economy favoritism and its stock market effects. After all, in the America of 2001, a trillion or so tax-cut dollars spread over 10 years can hardly match the trillions of dollars created and destroyed on Wall Street in a matter of weeks.

The equity landscape that George W. Bush inherited from Bill Clinton is vastly different from the one his father operated in. As the Economist noted a few months ago, America has become a shareholding democracy. Since the early '90s, the number of stockholding Americans has increased from 52 million to 84 million, more than half of whom have incomes of less than $50,000 a year. At the same time, the value of stocks, as percentage of GDP, rose from 60 to 181 percent at their peak last year. The stock market is no longer an enclave of the wealthy, and its 10-year boom has enriched millions of Americans who had previously never dreamed of entrusting their savings to stockbrokers, mutual funds operators and Internet transactions.

The shift of stock-market dollars away from the infotainment companies toward lethargic firms born in the 19th century threatens to destroy whatever savings they may have expected to receive through income tax reductions. While a tax cut might plausibly stimulate more spending on refrigerators and TVs by the imaginary "typical" four-person family with $75,000 in income, this family's stock market losses and slower long-term economic growth more than offset this stimulus. As the recent tragedy of the USS Greeneville and Ehime Maru has shown, it really does not matter whether oil executives or the military are at the wheel of the new administration. In either case, the imminent collision of the old economy with the new economy threatens to sink the 1990s economic boom.

Aida A. Hozic is a MacArthur Fellow at the Institute for European Studies at Cornell University. She is the author of the forthcoming book,Hollyworld: Space, Power and Fantasy in American Economy.

MORE FROM Aida A. Hozic