Day 1: A march, some speeches and a noble old lady. But the good vibes can't last. 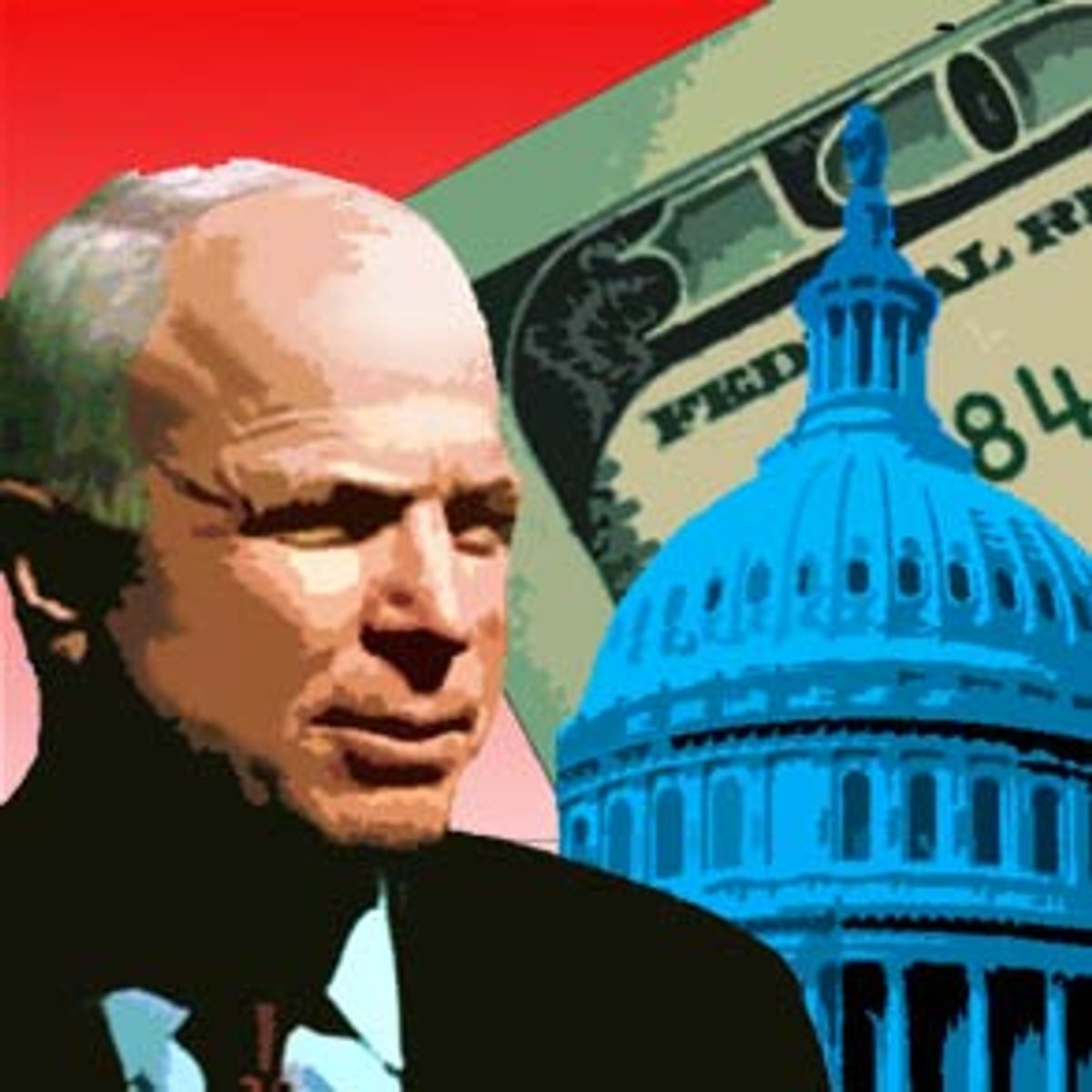 "We must guard against impugning each other's motives here on the floor of the Senate," said a slightly defensive-sounding Sen. Chuck Hagel, R-Neb., Monday as the debate over the campaign finance reform bill offered by Sens. John McCain, R-Ariz., and Russ Feingold, D-Wis., began. "No senator has the high moral ground over any other senator."

On what planet? To imply there's no difference in ethics and integrity between a genteel statesman like Sen. Dick Lugar, R-Ind., and, say, Sen. Bob Torricelli, D-N.J., whose most recent ethical blemish is a U.S. attorney investigation into his 1996 campaign finances, is silly.

Hagel's an interesting case study. He tries to wear as trusting an expression on his face as possible in the most cynical of circumstances. I'm still not quite sure I buy it. But Hagel's sunny, trusting demeanor will surely be tested in the next two weeks, which promise to be about as mind-blowing, confusing and cynicism-inducing a political experience as you'll see. Hagel's own campaign finance bill (currently favored by the White House) will be offered as a substitute bill in an amendment later. This week, it's the McCain-Feingold bill that is readying itself against what will be a torrent of relentless attacks.

While McCain-Feingold survived its first day without any significant damage, there were plenty of signs to suggest that it's in for a rocky ride. Senators from both sides of the aisle proved that, while quick to give lip service to the importance of campaign finance reform, they could be counted on to effectively drop-kick the bill should anything threaten to make them look bad.

But in the morning, for the McCain-Feingold troops, the day actually started with hope springing eternal, with the two Senate sponsors, one from each party, bounding out of the Capitol toward their respective party headquarters.

"I need the exercise, too," Feingold chirped.

"He does," McCain said. "The boy's getting out of shape. It's terrible."

With that, McCain, Feingold and about 50 reporters walked outside, where they met up with Doris Haddock, aka Granny D, who walked across America from Jan. 1, 1999, to Feb. 29, 2000, in the name of campaign finance reform.

Granny D was carrying with her some sort of sausagelike processed meat, on which she'd attached a piece of paper saying, "The Hagel Bill is 100 percent Baloney" -- a reference to the McCain rival's bill, which would limit soft-money contributions ($60,000 a year per election, per individual, per national party), rather than ban them, as McCain-Feingold would.

With cameramen walking backward and Granny D, 91, in tow, the campaign finance reform troubadours headed slowly but surely to the Republican National Committee headquarters two blocks away. Outside the stately white office building, McCain derided how special interests had taken over his party. "It's time for the parties to stop being a conduit for soft money and unregulated and undisclosed money, and it's time to be a party of the people again," McCain said.

From above, some Democratic staffers unfurled a makeshift banner that read "Democrats Support McCain-Feingold."

"There are some great Americans up there; we're proud of them. God bless you," McCain said, before adding: "Send back the checks, guys."

At 1 p.m., the McCain-Feingold Bipartisan Campaign Reform Act of 2001 (which was named McCain-Feingold-Cochran as part of the deal to secure the support of Sen. Thad Cochran, R-Miss.) was introduced. As agreed to in February by Majority Leader Trent Lott, R-Miss., Minority Leader Tom Daschle, D-S.D., McCain and Feingold, the structure for debate allows an unlimited number of amendments to be offered, alternating between Democrats and Republicans, with three hours of debate apiece and a straight up-or-down vote.

After half a dozen opening statements, it was amendment à go-go. Pete Domenici, R-N.M., offered "the Domenici Wealthy Candidate Amendment," which attempts to address what Domenici called a "legally created inequity" that puts roadblocks in the way of the fundraising abilities of middle-income candidates for office, while millionaires can spend as much of their own cash as they want.

Millionaires like, say, Sen. Jon Corzine, D-N.J., the former chairman of Goldman, Sachs & Co., whose net worth is around $400 million -- minus the $60 million he channeled into his Senate campaign last year, breaking all records. Or Sen. Herb Kohl, D-Wis., owner of the Milwaukee Bucks, worth $300 million according to Roll Call's annual report on the 50 wealthiest members of the House and Senate. Kohl spent $6.8 million of his own money to win reelection in 1994. Or any of the other 20 Senate millionaires.

Domenici's amendment would require any of these candidates to disclose, within 15 days of filing his or her declaration of candidacy, whether he or she intends to spend cash exceeding $500,000, $750,000 or $1 million. It would then proportionally lift individual and PAC contribution limits on contributions to these millionaires' opponents.

McCain staffers didn't consider Domenici's motives to be impure, but they had concerns that provisions of the amendment might be considered unconstitutional. On March 15, President Bush asserted that one of his "principles of reform" would be "nonseverability," meaning that should any part of the campaign finance reform package be struck down by the courts, the entire package would be voided. Because of this looming nonseverability principle -- which members of the McCain-Feingold brigade hear Sen. Gordon Smith, R-Ore., might try to attach to the bill -- they want to ensure that every amendment is carefully crafted.

Thus, the vaguely Alex P. Keaton-esque Sen. Mike DeWine, R-Ohio -- who had been working with McCain on an amendment with a similar goal -- made suggestions to Domenici that would prevent such constitutional problems for his amendment. There was talk of modifications to the amendment, which was cosponsored by Sen. John Ensign, the pompadoured Republican from Nevada who dresses like a blackjack dealer.

But Democrats like Sen. Chris Dodd, D-Conn., didn't agree to let Domenici modify his amendment under the often-cited "unanimous consent" provision of the Senate rules, which is frequently invoked in an effort to streamline the process.

This steamed Domenici and other Republicans, since unanimous consent is one of the gentlemanly traditions of the Senate, though Democrats countered that Domenici had already asked for an up-or-down vote, and under Senate rules you can't modify amendments after you've "asked for the yeas and nays" without unanimous consent. Some Democrats were worried about Domenici's motives; some Republicans were wary of Dodd's; members of the McCain-Feingold coalition were worried about the constitutionality of the amendment; surely other senators from both sides were just looking to play an angle. It got a tad messy.

Then Dodd made a motion to table the Domenici amendment altogether.

The voting began, and it was odd. Millionaire Democrats, seemingly sensitive to voting against a provision that would help their future nonmillionaire opponents, voted against the wishes of not just the McCain-Feingold coalition, which they were purportedly supporting, but of Daschle, their leader. Lining up to support the amendment: Corzine, Kohl, Sen. Jay Rockefeller, D-W.Va. (worth $200 million), Sen. Dianne Feinstein, D-Calif. ($50 million), and Sen. Mark Dayton, D-Minn. ($20 million), who spent over $11 million of his own money in his race last year.

Other Democrats whom the McCain-Feingold forces consider potentially slippery voted against Dodd's motion to table, including Sen. Ernest "Fritz" Hollings, D-S.C., and the shameless Torricelli.

Even Mr. Populist, Sen. Tom Harkin, D-Iowa, voted against the wishes of the McCain-Feingold team and supported the amendment.

While reporters were surprised, one McCain-Feingold strategist noted that Harkin had spoken against McCain-Feingold at a recent Democratic Caucus meeting because he feared a soft-money ban would hurt Democrats disproportionately. Last year, the Dems finally achieved relative parity with the Republicans on soft-money fundraising, though not on overall fundraising.

"Harkin's one of the guys you gotta watch on tricky amendments," says a McCain-Feingold strategist.

The results of the voting on this rather benign and uncontroversial motion to table the Domenici amendment were not a good sign for McCain-Feingold.

Forty-eight voted to table the Domenici amendment. Fifty-one voted against tabling it. Was the McCain-Feingold coalition dissolving before even one controversial vote?

Sen. Harry Reid, D-Nev., took the mike. "A senator wishes to change their vote," he said.

Corzine stepped up, raised his hand. "The senator from New Jersey," he said.

Torricelli changed his vote, too.

The final vote came down: "51-48, the motion to table is agreed to," the Senate president intoned. McCain-Feingold won.

Inside the cloakroom, Republicans like Domenici were pissed. No one likes it when senators change their votes at the last minute, when it matters. Domenici didn't like being denied the ability to modify his amendment. McConnell, for his part, an expert at exacerbating tensions, played up the idea that Domenici had been wronged, that the Dems were screwing over one from the GOP team.

Tensions soon subsided, though, as the "Three D's" -- Domenici, DeWine and Sen. Dick Durbin, D-Ill. -- agreed to work on another amendment. The Senate reconvenes at around 9:30 a.m. EST Tuesday to begin on the next amendment, this one -- at least according to Dodd's announcement -- addressing the same issue of millionaires.

"There was some disorganization," a McCain-Feingold lieutenant assessed Monday evening. "But everyone was operating on good faith for the most part. There was a little mischief by McConnell, exploiting the tension, getting his caucus riled up. But it was an OK day."

Whew! And this was just Day 1.