I dated a stripper 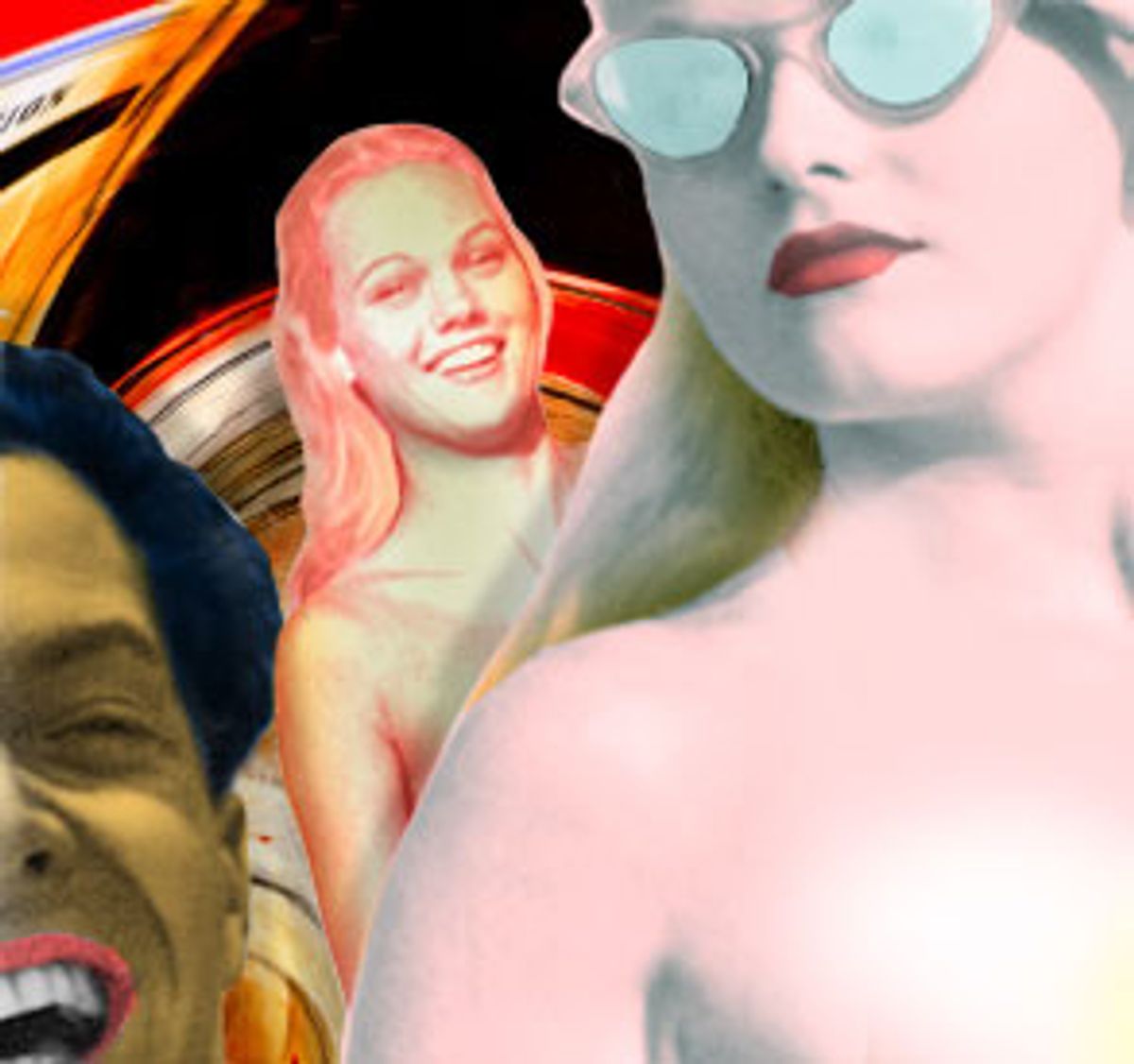 Not too long ago, my then-girlfriend leaned into me and huskily whispered in my ear those most tender, loving words every man longs to hear -- the words we go to sleep at night dreaming she'll one day utter: "I want to bring home another girl and watch you fuck her. Then I want to join in."

I had found the Holy Grail of sex. I was about to join a select group of crusaders who had conquered the noblest aspiration of Man: two women. But this was not the guilt-tainted pleasure of an adolescent, basement wank. It was the real thing, freely offered. And not by some girl whose face would turn your penis to parsley. My girlfriend (let's call her Stacy) was a stripper -- a beautiful stripper who worked one of Los Angeles' most upscale clubs. She had bronzed skin, a smattering of Middle Eastern genes, muscular arms that could throw you onto the bed and effortlessly pin you down while she did all the work and the best breasts money could buy. They weren't the spine-bending, gargantuan tumors featured in the pages of low-end skin mags, but the well-crafted art of a modern-day Rodin who could use his scalpel to reify the divine. They were the kind of tits you want to stick your head in between and shake it from side to side while saying "Brrrrruuuummpppkys!"

And I could be assured that whoever she brought home would be similarly astounding. When I met Stacy I had been in Los Angeles for six months, a 30-year-old English professor overwhelmed by the city's generous bounty of beautiful babes. As those months went by, I began to see that L.A. really does deliver on its clichés: 1) In Los Angeles, if you're old, short, balding and look like you're suffering from a flesh-eating virus but drive a Mercedes convertible, you're sexy; 2) if you're a tall, young, good-looking professor with a full head of hair but you drive a Honda Civic, forget it.

After kissing a doorman's ass for half an hour to win the privilege of bribing him to let you then pay again to actually get into the hip bar of the week, I would suddenly feel like a pimply 15-year-old nerd in a room crowded with nubile young cheerleaders. These girls' handbags cost more than I made in a month. I felt like they could smell my negative net worth.

It seemed to be a world I could never be a part of. So what's a guy to do when he's new to a big city and having trouble meeting girls? I tried the personals. One woman was real cute -- until she smiled and I saw her teeth were so yellow they looked gangrenous. Another spent the entire night complaining about her alcoholic ex-husband who still dropped by every now and then to sleep off his load on her couch.

I tried online dating. Don't trust the photos. One of my dates had looked reasonably attractive in her digitized picture, but when I met her she turned out to be shaped like a mango from the neck down. We passed away a couple of hours at the bar. She babbled interminably about crap in her life. She spent half the time telling me about her goal to become a real estate agent. She seemed to believe that this "ambition" was as noteworthy as if she were making a run for president. I tried a couple of times to interject a comment or anecdote of my own. She didn't even register the fact that I had said anything. As soon as I'd finish, she would pick up where she had left off: "Anyway, as soon as I get my real estate license I'm going to ..."

I giggled softly to myself as I sucked down my drink a bit faster.

Another girl I met online seemed promising -- until I discovered that she had long, dark hairs lining the perimeters of her nipples.

So when I met Stacy, a gorgeous graduate student, at a party and she showed an interest in me, I thought, this is more my speed. The next night I took her out. She had shed her body-concealing sweater and baggy pants -- a uniform she wore whenever she was at school or around other students -- for knee-high leather boots, a short skirt and a low-cut contour-clinging blouse. I wasn't sure it was the same girl.

And she liked me. No, she was crazy about me. She made loads of money. I mean shitloads. A more generous girl you can't imagine. Within weeks I had a whole new, L.A.-chic wardrobe. We went to the best restaurants and most exclusive clubs. It was like having a sugar mommy. Only mine was 28 and had double-D tits. The seemingly impenetrable world of L.A. glitz now opened its doors: Her body bought us instant entry wherever we went. I soared with confidence; I could talk to the highest-paid models in the city as if they were no big deal.

And the sex. We did it everywhere, every how, in every position and with every toy there is. Her vagina worked like the Energizer bunny on Viagra (it kept coming and coming and coming ...). No sooner would one orgasm fade than another, more intense one was building. It was like nothing I had ever experienced or even heard about. We're not talking two or three or even a dozen orgasms in a single session. This is not an exaggeration: In an hour of fondling, sucking and fucking, she would come close to 100 times. Not little baby orgasms either. They ranged from breath-holding back-benders to wailing, biting, blood-drawing, wake-everyone-on-the-block screamers. It was simply inconceivable, but true despite my continuing disbelief.

I know -- it sounds like bullshit. There's nothing I can do to support my claim. I certainly can't ask her to confirm its veracity. I suppose I could ask my neighbors to sign an affidavit, but that would be getting carried away. What can I say? It's like getting a hole in one in golf only no one's around to see it. You'll just have to take my word for it.

When she told me she wanted to bring another girl home, I didn't want to let on how the adolescent inside me was jumping up and down like a ... well, like an adolescent who'd walked into a girl-girl pictorial. Oh, yeah, baby! Break out the pipe and pajamas -- there's a new Hugh Hefner in town. Yippee-ki-yi-yay! echoed through my mind, but I tried to be as cool as possible.

"Cool," I said, dropping my voice an octave for maximum coolness. It was the beginning of the end. Not because I was into it. She was completely serious and apparently as turned on by the idea as I was. But somewhere along the line I apparently lost my cool and was too into it -- at least, according to her.

It would be an exaggeration to say that I took her offer of a three-way as a license to lust after each of her girlfriends. But between the three-way and her frequent remarks about women she found attractive and unattractive, I felt I had a certain freedom to be appreciative of other women. We went to a Valentine's Day party. The directions were to come wearing something appropriate to be spanked in. I wore a monk's robe and slung a sign around my neck that read, oh so cleverly, I thought: "Spank the Monk." She went dressed like ... well, like she was going to work: skintight PVC, plunging neckline, metal studs and stilettoed throw-me-down-and-fuck-me boots. Guys gave themselves whiplash when she strolled by. And she had invited several of her co-workers who, much to my pleasure, heeded my advertisement and whacked me smartly whenever they had a chance.

You might think having a houseful of guys drooling over your half-naked girlfriend would make you uncomfortable.

Bollocks. It was great. I felt totally secure because these guys could look, but only I could touch. Stacy and I had not yet gone through with the ménage thing. Tonight, I thought, was the night to pick candidates. She was being flighty, though, and she is no dumb chick. She is disconcertingly smart: the Ph.D. she is working on is just something she's doing for "fun"; she plans to go to an Ivy League law school when she finishes -- and I believe she will.

But in donning her stripper clothes she seemed to have taken a long dive off the IQ cliff. That night she was about as mature and sophisticated as Miss Teen Hawaii. She had invited many of the guests and had taken on the responsibilities of hostess so she'd appear for one second and be gone the next. I would grab her, ask her to introduce me to her friends, get a quick intro and zoom -- she'd be off again to bring cheer and cleavage into the lives of other partygoers.

OK, I'm at a party crowded with beautiful strippers who are getting drunk and flashing their tits left and right. Am I going to stand in a corner and yawn, or am I going to think I've died and gone to the giant Playboy mansion in the sky? Hell yeah, I was excited.

Too excited, I would later learn.

Jay Griffith is a writer in Los Angeles.