The new frontier in sports advertising might be the well-inked players themselves. 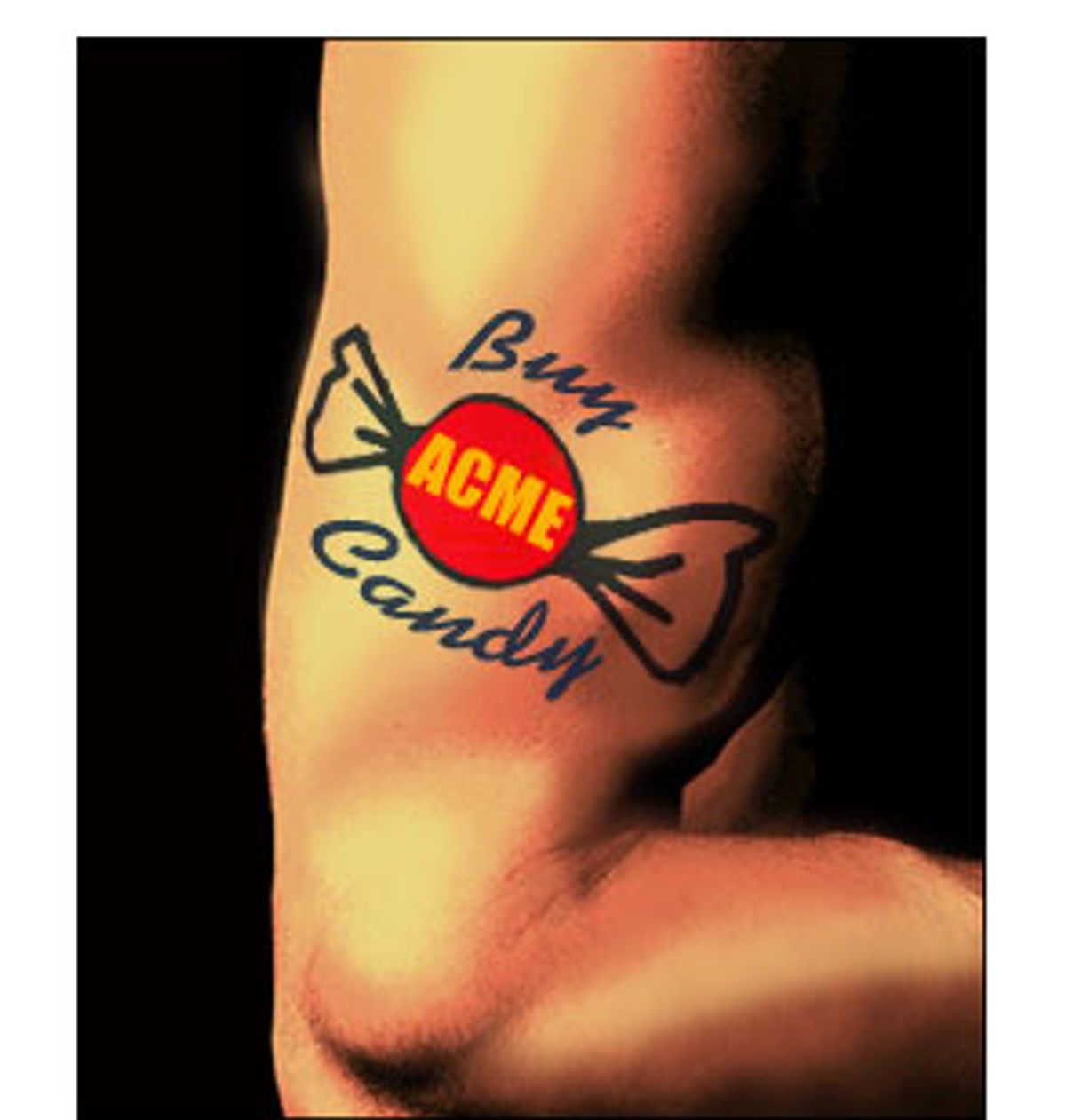 When a real issue in sports arises, one that threatens to disrupt sports from fan reaction to the very foundation of the game's integrity, you can bet that Costas and Gumbel and the New York Times are going to look the other way. The heat is simply too intense.

But not for me, baby; that's the point at which I jump right in. And I'm going to tell you now that if the tattoo issue isn't dealt with right away -- and I mean firmly, decisively -- it's going to turn into a raging inferno that will engulf us all. When you hear your own screams in the flames, please remember that you heard about this first on Salon.

Rasheed Wallace of the Portland Trail Blazers has tattoos up to and possibly in the wazoo. He has been asked to advertise for a major candy company -- with a tattoo. Wallace and his agent, Bill Strickland, haven't made an announcement yet, but an affirmative answer could challenge the very foundations of our legal structure.

Begin with the fact that no player in any major sport is allowed to wear any kind of advertisement of any kind other than the clothing logos the league and union both get a cut from. This isn't an issue among athletes, at least not right now: It's in the basic agreements for all the major sports, which means that both owners and players are in agreement. In theory. But while all the basic agreements basically agree about keeping advertising off the uniforms, there is, at least according to Strickland, "nothing in any basic agreement that forbids advertising on the human body." Not yet, anyway.

The NBA, led by commissioner David Stern, has been waging a hard and as-yet undecided war to control the league's image, the goal being a restoration of the product endorsements top basketball players were getting 10 to 12 years ago when Michael whatshisname was at his peak. So far, Stern has yet to score a major victory. The sight of teams full of heavily muscled 6-8 guys, their sweaty bodies covered in ornate tattoos, is not the scenario that Stern would like to present to sponsors, but so far there is little he has been able to do about it, and before the Wallace-candy rumors started to float it looked as if the commissioner was on the verge of giving in.

He certainly should have been, as there is nothing he can do about it; both the U.S. Constitution and the Bill of Rights and -- I might not be right about this, someone correct me if I'm wrong -- the United Nations Declaration of Human Rights are all explicit about a man's (though, thank God, not a woman's) right to wear tattoos anywhere and everywhere on his body he chooses.

I don't exactly know that tattoos come under the heading of free speech, and in truth neither can anyone else until the matter is decided in court, though one agent volunteers that "the free speech people will be able to write a book by the time this one is decided." By which I assume him to mean that, OK, you can say whatever you want on the Internet or on the Chris Rock show, but what if you try to take the court at a basketball arena with a big swastika on your arm?

Or, more important, what happens if your league makes a sponsor's agreement with, say, Nestlé, an agreement, let's remember, that benefits you since your own union gets a piece of that chocolate bar both literally and figuratively, and you decide to screw everyone by wearing a tattoo from a rival candy company? There's a very good chance that an angry sponsor could legally void the entire deal.

That these tattoos can be temporary only adds to the potential chaos. Players could change sponsors and, hence, tattoos, as often as Dennis Rodman changed hair colors. For that matter, who says a player couldn't make a switch at halftime and come out for the second half as a new commercial?

And if basketball players think they have a monopoly on this kind of advertising, think again. That swivel-hipped running back might fix his jersey to tear a little more easily and reveal an "Eat at Joe's" tattoo. And what's to keep Miramax from plugging its latest release with a big tattoo on David Wells' shiny bald head -- to be revealed every time he sweeps off his cap and bends over to pick up the rosin bag? My own personal contribution would be a giant parachute with the address for the driver's own Web site on it that would unfurl with every crash. The limits, as Rod Serling used to say, are that of imagination. Or maybe self-expression.

Anyway, stay tuned, because if Wallace takes the candy, the NBA, almost overnight, could be ablaze in tattoos, and every picture will tell a story.

To be completely fair, the condition of Venus Williams' knee had been raised a full two days before she pulled out of the semifinal match at Indian Wells the other day. OK, it's possible. It's also possible that Linda Fiorentino will send me a fan letter and maybe invite me to an exhibition of her basketball photos. Anything is possible. I don't really know how I feel about the fans booing her in public; but then, I didn't have to pay for a ticket. I do feel that the public would have been much more sympathetic if she had tried to play and failed. But, then, if she was hurting she would have risked real injury by doing that.

It has been argued convincingly that great players suffer from burnout by playing too much, and that if top players can pop in and out of the tour and still stay at the top of their game, fine. I'm even more grudging on that point, but in the end I have to agree that only the athlete can make a decision as to when he or she should play. I just can't help wondering if the appearance money for his girls that their father keeps bringing up would ultimately be a help or a hindrance to their careers. I submit to Mr. Williams: Would, say, a $100,000 appearance fee make Venus or Serena more likely to take a chance and play on that sore knee, or to play in a few extra matches that might accelerate that burnout? If so, you might want to rethink that whole appearance fee idea.