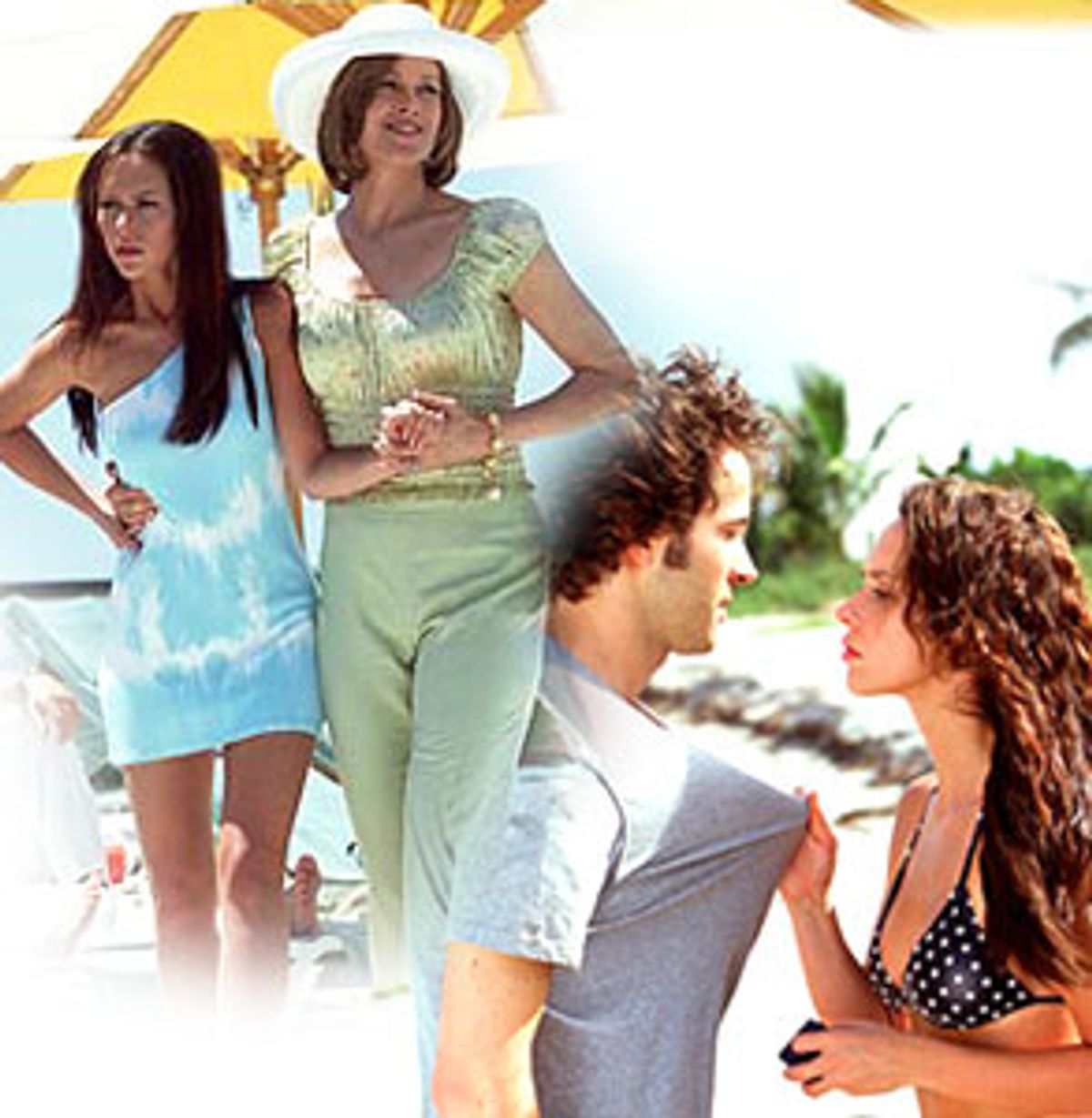 As Max, the head grifter of a pair of mother-daughter con artists, Weaver lights up the sunny, cynical farce "Heartbreakers." Weaver has always been a special delight in comedy, possessed of a manic spark that threatens to turn her imposing physical authority into a dizzy dervish. She's gotten to show off that spark in her stage work with her buddy Christopher Durang, the playwright, and on-screen in bits of "Ghostbusters" and "Working Girl," in her cameo in "Jeffrey" and in the surprise delight "Galaxy Quest." But "Heartbreakers" gives Weaver her fullest and most sustained comic role yet.

Max's method is to hook some well-off sucker, keep him begging for the sex that she claims is against her religious beliefs, reel him to the altar and then, when the schmuck is doubled over with desire, arrange to catch him in a compromising position with her daughter, Page (Jennifer Love Hewitt). A quick, lucrative annulment later and Max and Page are on to their next mark. The characters Max slips into to lure her bait provide Weaver the chance to cut up.

In the course of the movie she goes from a blond Italian-American princess to a Russian émigré with a thick accent, and Weaver gets a laugh out of each drooping "Da." The screenwriters, Robert Dunn and the team of Paul Guay and Stephen Mazur, provide her with the sort of silly malapropisms that can keep you giggling for days. Complaining, in Russian mode, that the INS is about to deport her, Weaver laments, "I am loopholeless!" It's the funniest display of phony Russianisms since Mischa Auer suffered his way through "Otchi Tchornyia" in "My Man Godfrey."

Shortly after "Heartbreakers" opens, the partnership between mother and daughter starts to come undone. Page is champing to get out from under the care of her overprotective mother; Max is sure Page is still too naive to fend for herself and will wind up alone and pregnant, just as she did at the same age. After Max and Page dispatch victim No. 13, Liotta's Dean, a Jersey chop-shop owner, they find that an even bigger grifter, the IRS, has left them busted. So the two agree to one big con that will be their swan song as a team and settle on a pigeon: Tensy (Gene Hackman), a Palm Beach, Fla., tobacco billionaire who's just a few breaths ahead of an iron lung.

Hewitt's performance probably wouldn't be as funny as it is if it weren't for her darling, crinkly off-screen image as America's sweetheart, an image she gleefully defaces here. She's as slick and brittle as a new coat of nail varnish. She's also as trashy and sexy as millions of straight men have longed to see her act. There's probably no graceful way to describe the effect of her push-up bras and short, skintight dresses except to say that in years to come her wardrobe here may conceivably serve as the basis of an enterprising engineering thesis.

Page's sexpot look is all calculated -- she has to make sure the schmoes that her mom sets up will be tempted -- but what makes her sexiness funny is that Page is so focused on business she's only partly conscious of her own body. When Hewitt pivots on her high heels and struts away from the camera, she marches like a half-pint soldier setting off to take no prisoners. She probably loves her stacked heels because they get her where she's going at least a couple of seconds faster. Part of the reason we're free to enjoy Love Hewitt's kewpie doll lewdness here is that the movie takes no sides in the sexual competition between mother and daughter; there's never a second where you're meant to think that Weaver is less tempting because she's not a nubile young thing.

Page's tough-gal routine gets put to the test when Mama's worst fears prove to be right. In the course of setting up the scam on Hackman's tobacco tycoon, Page falls for Jack (Jason Lee), a young man trying to fend off the offers of land developers and make a go of the pleasingly ramshackle bar his old man left him. You can tell from the way Page treats Jack like dirt -- in romantic comedy tradition -- that they're made for each other. And Lee, who nearly stole the spotlight from Billy Crudup as the chief sex symbol in "Almost Famous," gives a comic-romantic leading man performance unlike any that I can recall.

There are usually two choices open to the actor playing a man in love with a woman who claims to despise him: patsy or brute. Lee, who has a great smile, doesn't go either route. Jack takes one piece of grief after another from Page, but Lee never allows him to become her whipping boy. It's an almost offhand performance -- cool, casual and yet generous. Lee is one of the new breed of young leading men who are content to cede space to their female costars. It's a smart move. He's setting off Hewitt here, but his graciousness, and his underplayed sexiness, reflect back on him.

"Heartbreakers" is full of great second-banana bits from the likes of Anne Bancroft, Kevin Nealon, Carrie Fisher (on her way to developing a voice that can shatter brass) and Nora Dunn, doing a riotous takeoff of Judith Anderson in "Rebecca." As Tensy, Hackman is triumphantly slimy. Wheezing and hacking and drowning in a veritable ocean of phlegm, his teeth yellow, his skin pasty and gray in shades I'm sure are not to be found in nature, Hackman looks so rotten that I was sure I could smell his smoker's breath every time he came on-screen. The more you recoil from him, the funnier he gets. And as the mark who goes looking for Weaver when he can't get her out of his mind, Liotta shines in the picture's last half-hour.

Director David Mirkin has gotten considerably more adept since his last picture, "Romy and Michele's High School Reunion," which was funny enough to get past being something of a mess. "Heartbreakers" looks inviting, all done up in plummy tropical pastels, thanks to Dean Semler's cinematography.

At two hours the picture could stand to lose about 20 minutes, and though it nearly goes dangerously soft in the last half-hour, Mirkin has a knack for farce. Things never threaten to fizz out of control the way they do in the really great farces, but he keeps the film moving along at a smooth, even pace. A picture about a mother and daughter putting their respective charms to work on a procession of suckers could be disastrously gross. Mirkin hits just the right note between naughty and raunchy. It's cheerfully amoral. Weaver and Hewitt come off as queens of the con by natural right. Anybody who can't match them for wit deserves to be taken.