Readers respond to "'Once and Again' is once too often," by King Kaufman and "A matter of life in death," by J.B. Orenstein. Plus: Harvard Graduate School of Education responds to Christina Hoff Sommers. 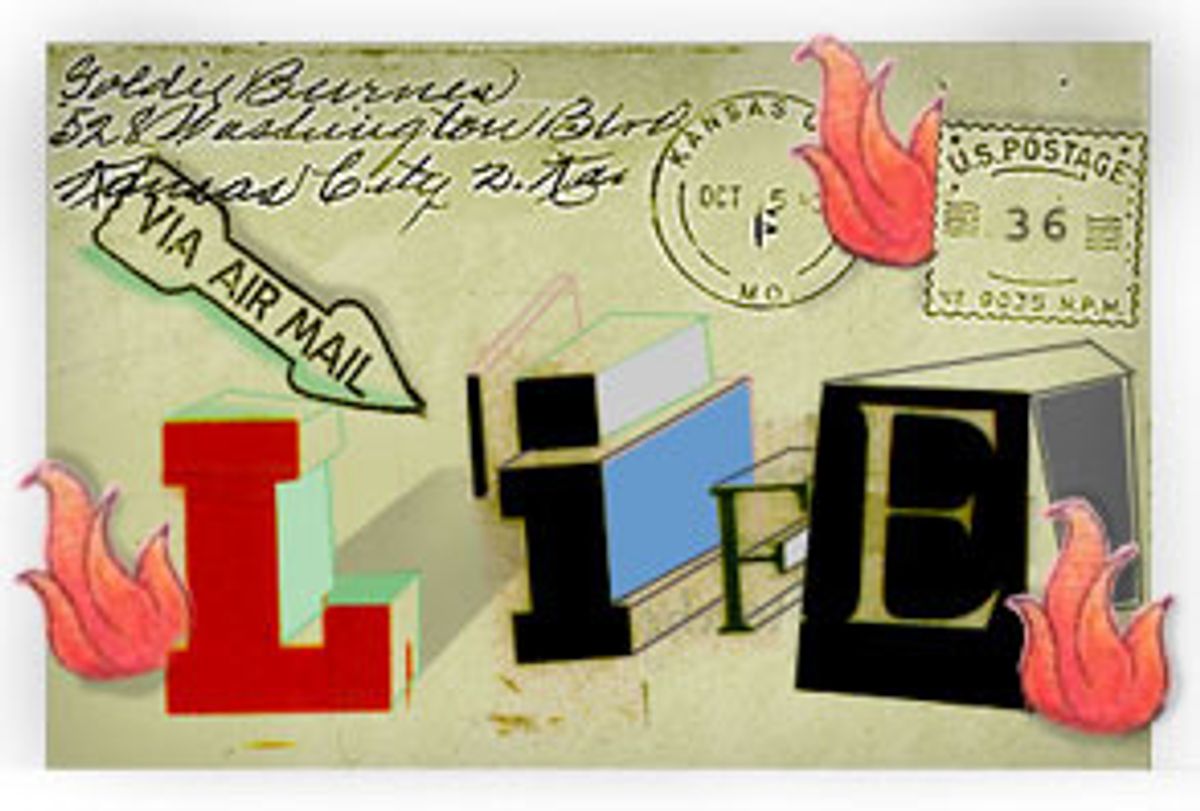 Read "'Once and Again' is once too often" by King Kaufman.

Having read King Kaufman's silly diatribe on "Once and Again," I agree with his wife. He should be in trouble on Wednesday nights. The show is one of the few things on TV worth watching these days. And one of the few programs geared to people who could care less about "Temptation Island," New York crime shows or whether "C" is in fact someone's final answer. If Kaufman doesn't like "Once and Again," there's an easy solution: Go in another room and let his poor wife enjoy a quality show in peace.

My partner and I -- both women, me a middlebrow-dramedy addict, Lise emphatically not -- bridge our differences in the matter of "Once and Again" by watching it as a drinking game.

The "Once and Again" game goes like this: Every time someone makes a phone call, as Lily and Rick are constantly doing to arrange who has the kids what night and when they can meet for one of their admittedly boring trysts, we drink. Every time someone rolls his/her eyes (we can always count on the marvelous Grace for this), we drink. When drinking seems too decadent for a work night, we eat chocolate chips instead. Oh, and whenever anyone on the show kisses his/her sweetie, we kiss.

Not only does this approach make up for the letdown of settling for this decidedly mediocre show right after the much smarter "West Wing," but after half an hour or so, we don't even care who's whining about what. Now that's entertainment!

I happen to be a female who is in her 40s and I love watching "Once and Again." No, it's not the greatest show ever on television, but then again, most of television is a waste of time. The only show I watch faithfully is "Once and Again."

I don't think it is written for men anyway. Men don't want to watch shows about divorce, stepfamilies and real life. They want shoot-'em-up shows and fake wrestling. Some men. Some other men are interested in the show, I'm sure. I hope. Because we could all learn something from these attempts at real-life shows.

As a regular visitor to Salon.com, I appreciate the diverse opinions of your staff writers. I was still annoyed, however, by your article criticizing "Once and Again." Kaufman's main problem with the show seems to have to do with the fact that it is a drama rather than a comedy, but he implies that it is because it is a woman show rather than a man show. (The latter also happens to be the name of an idiotic boobfest that you can find on Comedy Central if you feel like having an antidote to "Once and Again.")

I wonder how Kaufman feels about male-oriented dramas like "NYPD Blue" and "Law & Order," whose characters scatter semiphilosophical and profound statements throughout the episodes (when you can understand what they are talking about through the monosyllabic grunts you often hear from some of the "NYPD" actors).

Basically, if Kaufman only likes comedy, then maybe he should watch the comedy shows that come on before the 10 p.m. dramas, but also he should be more honest about his problems with "Once and Again." They talk about emotions that real people have. If he is not interested in this topic, then maybe he should just say so, rather than getting annoyed with them for not being "silly enough."

Here's why Herskowitz and Zwick are rich TV and movie producers and Kaufman isn't: They understand women. They know that we want characters we can empathize with, who aren't perfect, who are maybe even shallow and whiny and not quite so together as we are. It makes us feel better about our own lives. And let's face it, befuddled, sensitive men like Rick (and repentant adulterers like Jake, Lily's ex) are great fantasies.

So the ratings aren't great. Who cares? The show is basically a prime-time soap with aspirations to classiness, and it's reaching its demographic. And here's what Herskowitz and Zwick (and their advertisers) know best about women ages 24-49: We control the pocketbook in most households. So I don't think they really care that King Kaufman doesn't like the show. Women love it, and that's really all that matters.

Read "A matter of life in death" by J.B. Orenstein.

Wow. I was absolutely riveted to my computer screen. Who needs to watch "ER" with all of the commercials when you can read such amazing, alive and true stories by fine writers on Salon.com?

I have never cried so much over something I've read on the Web.

Thank you for such a beautiful story.

Dr. Orenstein left me choking back sobs with his tale of tragic death and selfless E.R. professionals.

Perhaps the fact that I can visualize so clearly what went on is because I worked in somewhat similar situations when I was in Vietnam during the war. Or perhaps it is simply a deeply felt piece of writing that is doing the work.

Thank you. I think.

Over the past few years, your articles have elicited different emotions from me. Usually, they make me laugh, or think, or nod to myself in acknowledgment. But "A matter of life in death" was the first article to make me cry at the keyboard.

Thank you for such a beautifully sad read.

I have never wept from an article in any news publication. Until now.

I have read Salon almost every day for the past two or three years. This is the finest piece of writing you have ever published.

Oh, no. In the chase for better ratings I hope you won't take too many pages from Reader's Digest's Drama in Real Life.

No more words are needed.

Read "Battle of the celebrity gender theorists" by Amy Benfer.

I write to point out the inaccurate characterization of the new Harvard Center on Gender and Education offered by Christina Hoff Sommers in a recent Salon.com interview. Far from promoting "gender propaganda," this center will promote the learning of all children.

A robust body of research has shown us that:

An interdisciplinary research center with scholars who examine gender issues from a variety of academic perspectives has much to contribute to the high achievement and healthy development of boys and girls.

We are grateful to Ms. Fonda for her support.