Not even the beaver jokes are funny in this rangy, uneven Farrelly brothers rip-off. 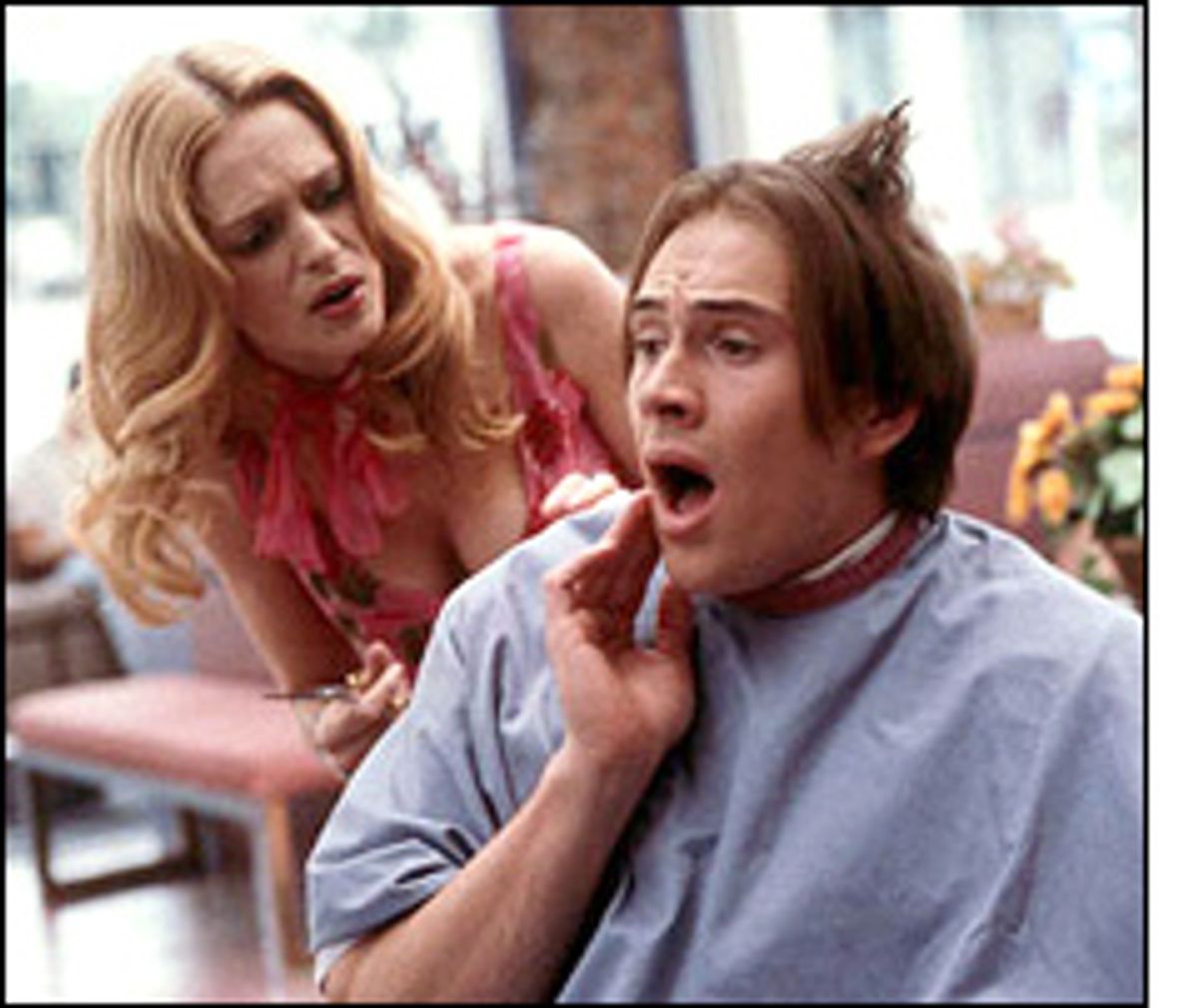 It's an ugly world out there, but the good news is that comedies as thumpingly unfunny as "Say It Isn't So" don't come down the pike every day. Produced by (but, sadly, not directed by) Peter and Bobby Farrelly, the movie takes everything the Farrellys have done so well -- gentle and not-so-gentle pokes at God's dimmer bulbs, tasteless yet strangely humanitarian wheelchair-type jokes, tacky gross-out humor that makes you giggle in spite of yourself -- and cranks it up.

The movie is like a well-intentioned designer knockoff that doesn't know when to quit: There's an extra buckle where none should be, or a useless seam that puckers. The whole picture glistens with a desperate sheen of sweat, as if director James B. Rogers (who has worked as an assistant director on the Farrellys' previous pictures) felt he couldn't afford to let up for an instant lest he lose his audience.

But he and writers Peter Gaulke and Gerry Swallow do lose us, over and over again. As contemporary comedies go, "Say It Isn't So" isn't particularly repulsive, loud or manic, but it has the odd distinction of being both numbingly obvious and droopy.

A young orphan and good-natured small-town schmoe (Chris Klein) finds the love of his life in a ditzy hairdresser (Heather Graham) only to discover that she may be his own sister. Graham's, and possibly Klein's, mother (Sally Field), a social-climbing, lower-class suburbanite with a penchant for bright yellow stretch pants, doesn't care much for Klein as a potential husband for her daughter, anyway. He works as an animal-control officer (a genuinely sweet-natured fellow, he recites a special poem to the dogs and cats just before they're euthanized). To her, Graham's previous beau (Eddie Cibrian), who owns a rambling faux-mansion in another town, is a much better catch. Field is happy enough when the news of her long-lost son breaks and a heartbroken Graham flees the family homestead in Indiana to go back to the old boyfriend, who lives in the ever so uproariously named Beaver, Ore.

The bad news is, not even the beaver jokes are that great here. They don't come close to sustaining us for the rest of the movie, in which Klein pursues Graham, hoping to prove to her that he's really not her brother and thus win her back. The big problem is that he's been branded as a pervert for diddling his own sister (the local townsfolk take great pleasure in writing slurs like "Sister Slammer" in the dirt on his pickup truck), and the joke -- even as it's played against Klein's fresh-scrubbed cherub face -- gets tired pretty quick.

Then again, just about everything gets tired pretty quick in "Say It Isn't So." The picture's jokes rattle along amiably enough, in the Farrelly tradition, but there's always something a little rangy and uneven about them: They're a quarter-beat off, or they trail into the ether just when they need a kick, or, worse, they're punctuated with a kick just when they need to sit and rest for a moment. Klein and Graham are beamingly attractive leads, but they're barely given a chance to anchor the movie: The gags spin and swirl around them, occasionally glancing off them with a feeble ping. Their internal time clocks, trying to preserve some shred of their dignity as actors, simply refuse to lock in with the rest of the movie.

Everything in "Say It Isn't So" is either off by a mile or off by a hair. The white-trash jokes don't have either enough wicked, devil-may-care bite or enough underlying humanity to work. When Field explains that she chose to give Klein up for adoption in favor of his older sister, she drawls, "One of you had to go, and Jo was already housebroke."

Orlando Jones, as a legless pilot who befriends Klein, is one of the movie's bright spots. In the Farrelly style, "Say It Isn't So" has its token person-with-an-infirmity, and to his credit, Rogers almost strikes the right tone, making Jones' condition a joke only in cases where he'd surely have to laugh about it himself.

Jones is a welcome relief -- his home is a ramshackle hippie cabin by a lake, with a dingy sign that says "God Bless Our Pad" on the wall and a jumble of spare prosthetic legs piled high on a shelf -- but we don't get to spend much time with him. Mostly, we're left adrift to endure an endless succession of puttering jokes, like the way Klein suddenly (and uncharacteristically) loses his temper and punches his fist into a cow's vagina. (And it gets stuck! Can you imagine?)

At the very least, "Say It Isn't So" isn't nasty or mean-spirited. Rogers has clearly learned plenty from the Farrellys; he just hasn't learned quite enough.

And it's likely, anyway, that what makes them special can't be taught. The broad, unapologetic cartoonishness of "Dumb and Dumber" and "There's Something About Mary" is an attribute, not a liability. But beyond that, the Farrellys have always added an extra dash of style to their work, and their knack for timing has allowed them to pull off even the silliest gags. Rogers may have some of the Farrellys' most basic skills, as well as a glimmer of their sensibility; he just doesn't have their oomph. They say good taste can't be bought. "Say It Isn't So" is proof that bad taste doesn't come so cheap, either.