In "Enemy at the Gates" we feel the thrill and mischief of making love secretly while surrounded by others. 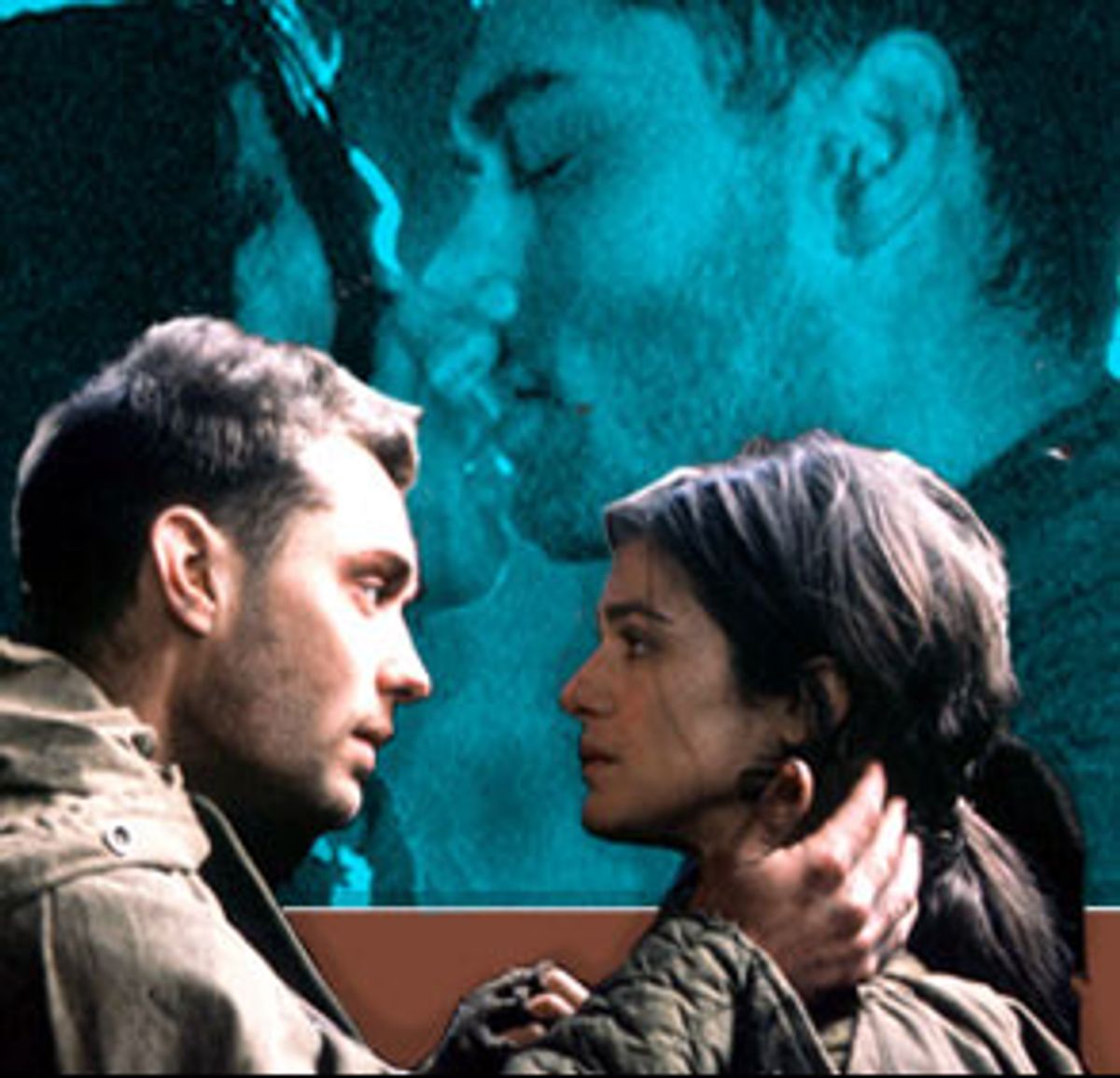 I suppose there's an educational virtue in setting a mainstream movie in Stalingrad at the time of its great battle. But why do all the Russians in "Enemy at the Gates" have to sound as if they're from south London? And why should Rachel Weisz seem like the captain of the school net ball team? I appreciate the effort to give every character dirty hands and filthy fingernails, but, still, I felt the hours spent in makeup to get that effect. The actors within the characters are so sleek and healthy looking, so modern and airy, so unshadowed by Soviet salvation.

So it's generally a silly, schoolboyish film about dueling snipers and a lot of money used to create the feeling of devastation and poverty. But then there's the lovemaking scene.

Weisz and Jude Law become lovers in the shambles of a half-destroyed building where many other comrades are trying to sleep. She comes into his narrow space. We see those grubby hands going beneath the heavy serge pants they wear. And there are a few moments in which the two actors convey a lot: the real anticipation of lovemaking, of sex; the thrill and mischief of doing it secretly while surrounded by others; and then, in Weisz's eyes (he is smothering her mouth), a real uncertainty as to whether she can stay quiet, or whether the wildness set free in her body will bark and moan and roar enough to rouse the dead. The glee turns to something like alarm, and just for an instant -- poised on the brink of lost control -- you can't tell whether she's being raped or finding the passion she longs for.

Most of us have made love in similar predicaments: jammed up against paper-thin walls, in a shared room at college or in all the dormitory institutions life provides. Parents may be driven to it with restless children in the house. You say to yourself, "Don't wake the little ones," or some version of don't wake the others, because there's a need for privacy in intimacy. So it's fascinating that lovemaking is so recurrent a moment in films, no matter that, deep down, we know the actors knew they were being watched. Is there something in all of us now intrigued enough to make a spectacle, a show, of fucking? Is that the new turn-on? Or would you be impotent in a crowd or an arena?

It made me think of a day 25 years ago -- and I have to say that this was in England, and times were different then. My mother had a brain tumor and I had helped wheel her on a gurney down to the radiation treatment room. There was a waiting line of gurneys jammed together in a corridor. And there was a thin man on one of them, and he was masturbating -- in the open, daring anyone to watch closely. It was his comfort, I suppose, and he was farther on in the treatment; he was only a scrap. But it alarmed my mother: She was new in the hospital. Helplessly, I asked a nurse in a rubber apron if the sight could be avoided. She shrugged and went away. You could say that my mother and I were protected and genteel. On the other hand, I think what disturbed her was the realization of where she was -- how she was in a perilous kingdom where the nearness of death had erased intimacy.

I wonder if Stalingrad was that bad?