The education of John McCain

Stabbed in the back by his congressional colleagues, the nation's campaign finance crusader should take his battle to the people. 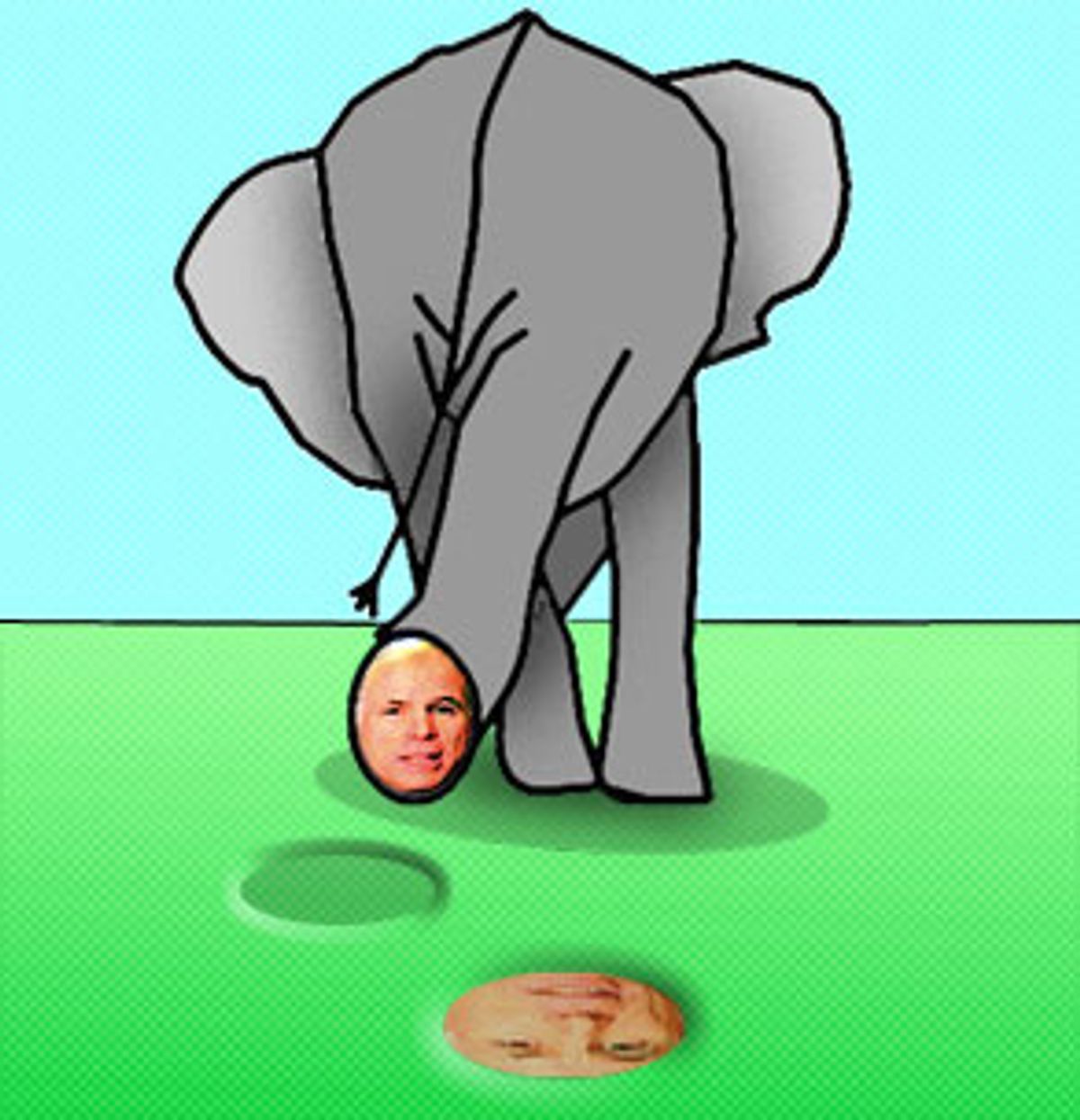 John McCain should take a lesson from history.

Thirty-six years ago, in March 1965, Martin Luther King Jr. met with President Lyndon Johnson to press for a voting rights bill. LBJ wavered, certain that the votes needed for passage weren't there. King left the meeting convinced that the votes would never be found in Washington until he turned up the heat in the rest of the country. Two days later, the "Bloody Sunday" confrontation in Selma, Ala., captured the conscience of the nation. Five months later, the Voting Rights Act became the law of the land.

Let's hope McCain is a quick study. As his opponents try to kill McCain-Feingold with the Death of 1,000 Amendments, it's becoming abundantly clear that the battle for campaign finance reform is not going to be won on the Senate floor. It will have to be won in the streets. McCain should pull the Straight Talk Express out of the garage and hit the road to fuel the outrage of the American people.

At the moment, it seems a daunting prospect to foment a civil uprising based on a systemic corruption so broad as to be almost ungraspable. But McCain has an unfortunate ally waiting in the wings: the coming recession.

As the recession takes hold, the anger and bitterness toward a political culture geared to serving only the biggest campaign contributors will become a tinderbox waiting to explode. The resignation will turn into revulsion as the casualties of our current system continue to mount in those without the money and connections to get a patients bill of rights or decent schools.

We have been witnessing what might be called "The Education of John McCain." He quixotically thought he could be both a reformer and a loyal Republican, and was rewarded with a knife in the back from his best friend in the Senate, Chuck Hagel of Nebraska. Hagel's bill -- a shameful soft-money-friendly sham masquerading as reform -- is currently providing cover for McCain's enemies, both old and new.

Yet Hagel sounds like Mark Antony, praising Brutus to the sky as "an honorable man" at the very moment he is fatally undermining him: "John McCain's my closest friend in the Senate," Hagel protested this week. "I sent him flowers today. He has on a tie that I gave him ... I've professed my undying fidelity and loyalty and love to him." So McCain is getting royally screwed just as he's being showered with flowers, gifts and promises of undying fidelity. Sound familiar, ladies?

Will his buddy's betrayal -- which is making the collapse of McCain's signature bill all the more likely -- be the final straw? And will McCain at long last stop trying to be a team player and take the battle directly to the American people?

One of McCain's favorite lines is from his mentor, the late Rep. Morris Udall, who used to say that the difference between a cactus and a congressional caucus is that in Congress "the pricks are on the inside." And if you turn on C-Span this week, you'll see them in full bloom.

Jack Welch, General Electric's celebrated chief executive, recently offered a tutorial in leadership math that might prove helpful to McCain. "A company," he said, "that bets its future on its people must remove that lower 10 percent and keep removing it every year -- always raising the bar of performance and increasing the quality of its leadership."

Unfortunately, American politics has turned the equation around. We are being governed by our bottom 10 percent: sociopaths who spend two-thirds of their time begging for money and are so in need of validation that they're willing to compromise any and all principles for the honor of having "Representative," "Senator" or "President" before their name.

Until this year, Democrats were able to stand united under the banner of reform, safe in the knowledge that their Republican counterparts would never let McCain-Feingold hit the Senate floor. But now that that Get Out of Jail Free card has expired, the time has come to put up or shut up. And the shutting up has begun. It's almost deafening.

It started with Breaux, who announced last week that he would vote against the bill. This is the same Breaux who, in March 1997, called campaign finance reform "our No. 1 priority." Perhaps the senator's change of heart first took root during the pricey Mardi Gras-themed party that Texaco, Bristol-Myers Squibb and 22 other companies threw for him at last summer's Democratic Convention.

As for Breaux's fellow Louisianan, Landrieu has signed on as the chief Democratic cosponsor of Hagel's Trojan horse, while still claiming to be a supporter of McCain-Feingold -- thus trying to have her reformer's cake and defeat it, too.

It took the Selma marches before LBJ was willing to put the public interest above his party's short-term interests. "There goes the Democratic South," he lamented as he signed the bill. To continue to hope that today's political establishment will act against its self-interest and vote for real campaign reform is an exercise in utter futility. Our leaders will have to be pushed against the wall before they do the right thing.

After all, to do so would mean the end of 98.5 percent reelection rates for incumbents -- and the end of the reign of the bottom 10 percenters.

And that's certainly a cause worth taking to the streets.