A golden girl from Birmingham's elite takes a cold, hard look at her hometown's ugly past -- and her own father's role in it. 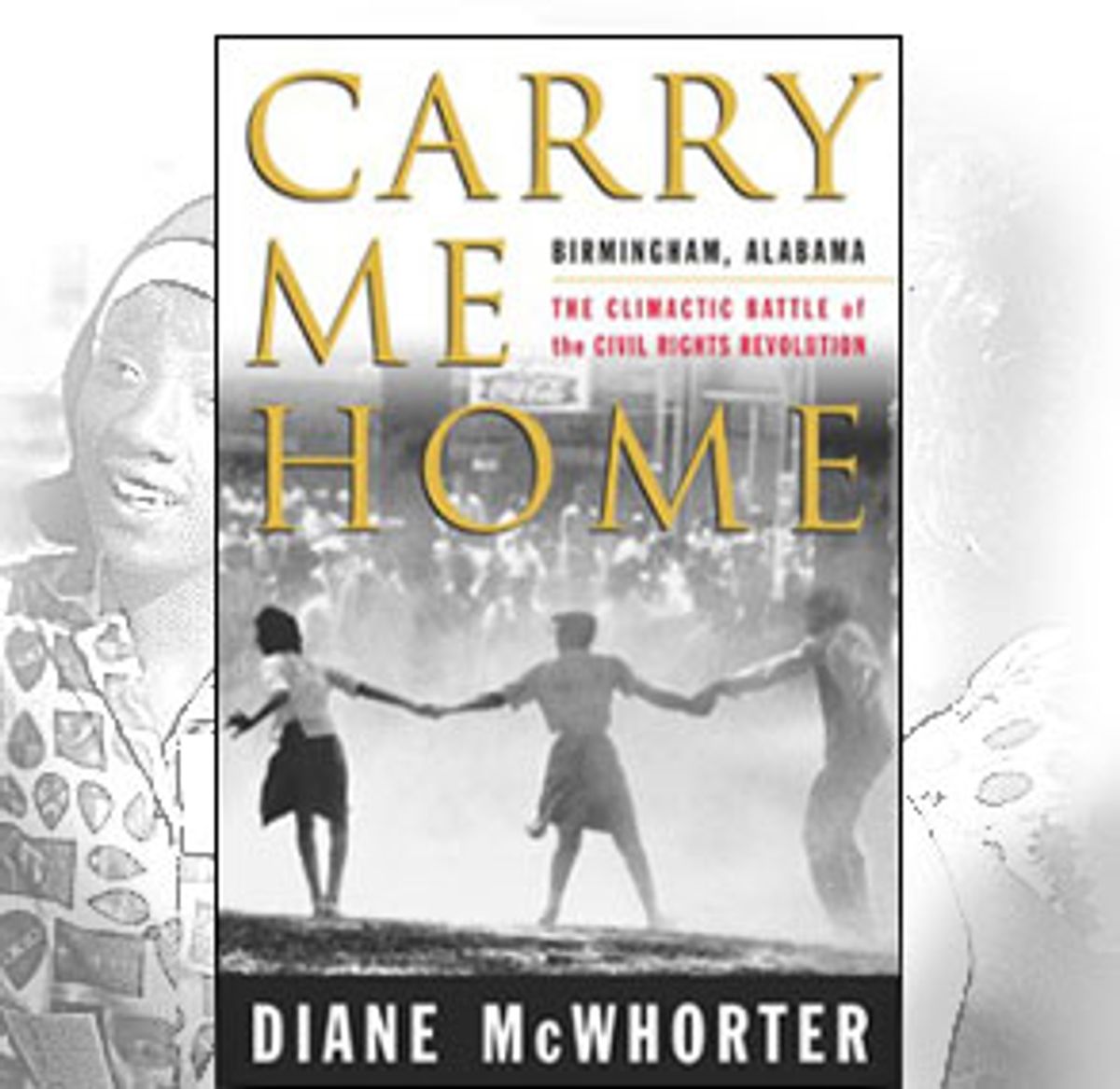 To grow up in Birmingham, Ala., in the 1960s -- as I did, and as did Diane McWhorter, author of "Carry Me Home: Birmingham, Alabama, The Climactic Battle of the Civil Rights Movement" -- was to be asked to believe in a scenario of white working-class life that was midway between "Leave It To Beaver" and "The Andy Griffith Show." You got along not by coming to terms with the momentous events going on downtown, but by learning to pretend they weren't happening (or at best that they were the product of outside agitators). Or by simply getting out.

McWhorter spent the first part of her life in privileged denial, and most of the second, it appears, in catching up. Wisely, she never tries to place her own story at the center of her book; she simply places all her personal cards face-up so the reader may better judge her perspective.

McWhorter grew up "on the wrong side of the revolution," a white girl, the daughter of Ivy League-educated parents who lived across the hill from the city itself in Mountain Brook, one of the country's wealthiest suburbs. She was roughly the same age as the four little girls who were killed in the 1963 bombing of the 16th Street Baptist Church, an event which meant less to her at the time than the cancellation of her school's production of "The Music Man."

In subsequent years McWhorter would be haunted by the killings and, increasingly, by the knowledge of her own father's involvement with the Ku Klux Klan. Finally, her desire to dig up the truth could not be assuaged by anything less than a thorough and complete knowledge of the politics, economics and personalities that led to the most important social events of 20th century America. For there is no hyperbole in her book's subtitle; the struggle for civil rights was nothing less than a battle, and Birmingham was no less a defeat for white supremacy than Stalingrad was for the Nazis.

Though it wasn't apparent to those of us who grew up there, Birmingham was far from a typical city of the Deep South. The big difference was industry: Birmingham really didn't begin to rise until well after the Civil War, and the spur to growth was steel. Though the steel industry has long since given way to the service economy, the town still contains vast yards of warehouses and refineries (if you recall the strike scenes from the 1984 Mel Gibson film "The River," which was filmed right near the downtown area, then you know what much of it looks like).

McWhorter revives an unfashionable explanation -- class antagonism -- in tracing the roots of the battle for Birmingham: the local steel powers, or "Big Mules," pooled their efforts to keep the thousands and thousands of "millbillies" from organizing. Almost before the race conflict began, the town saw violence and intimidation against union organizers and ambitious communists, who nearly succeeded in gaining a foothold in the ranks of Birmingham labor. The Big Mules, like Mafia dons, had stooges and fixers to carry out their acts of terrorism and intimidation so they need have no direct connection with the violence.

The most famous fixer was a former baseball announcer and "cornball" radio comic named Eugene "Bull" Connor, who rose to the position of city commissioner and proved adept at orchestrating violence when, as McWhorter puts it, "the have-nots threatened to organize along racial lines." The Big Mules never gave specific orders; there was no need to, as they merely had to "delegate political intermediaries to oversee strategic racial violence."

Meanwhile, at the other end of the social spectrum were tough, battle-hardened veterans of the labor and civil rights struggles, best typified by Fred Lee Shuttlesworth, the hero (if you must pick just one) of "Carry Me Home," rather than Martin Luther King Jr. Indeed, King does not come off at his best in McWhorter's account, if only because her emphasis on the local, relatively unknown heroes serves to diminish the perception, held by many white liberals, of King as Messiah of the Alabama movement.

"From the relative safety of Atlanta," McWhorter writes, "King had watched the trials of his Birmingham colleague Fred Lee Shuttlesworth, the proud creature of a city he said had "a heart as hard as the steel it manufactures and as black as the coal it mines." Shuttlesworth's "ramrod carriage, arrogantly tilted head, and harsh intelligence, contained in the package of an unpolished, rabble-rousing Baptist preacher, contrasted with the Reverend Dr. King's intellectual Hamlet image, as the pampered product of black bourgeoisie."

Shuttlesworth, whose "appalling courage" (he had been threatened, bombed and whipped with chains) earned him the title "The Wild Man From Birmingham," was an utter realist. While publicly adhering to King's nonviolent approach, he knew, as did the Irish rebels of 1916, that the goal could not be won without violence. The difference was that Shuttlesworth knew his people would have to endure most of the violence without hope of winning any direct reprisal.

"Bull" Connor proved to be an unwitting pawn, albeit a brutal one, of Shuttlesworth and the movement. Or, as Wyatt Tee Walker, executive director of the Southern Christian Leadership Conference, put it, "I prayed that he'd keep trying to stop us ... Birmingham would been lost if Bull had let us go down to the city hall and pray." By turning on the fire hoses and bringing out the dogs, "Bull" Connor helped galvanize a people, not just in Birmingham, but through national television, around the world.

It would be misleading to call "Carry Me Home" a difficult read. It is in fact a very difficult read, rich and complex and at times maddeningly detailed. I have seen at least two critics comment that at times they had difficulty "seeing the forest for the trees".

Well, that's because the trees are so big and the forest so wide. It would have been neater if this fabulous cast of characters had all lived simpler lives, or if the battle for civil rights had not been so hard, but there you are. One might suggest that the reason this story has never been told before is precisely because no writer has been so willing to give as much of herself as was needed to tell the story. It's tough enough to devote more than a decade to researching a book like this, but to have to ask your father at the end of it if he bore any responsibility for the murder of four little girls is courage above and beyond the call.