In a program with no center and not much heart, the young and unshaved looked to old Hollywood for glamour and class. 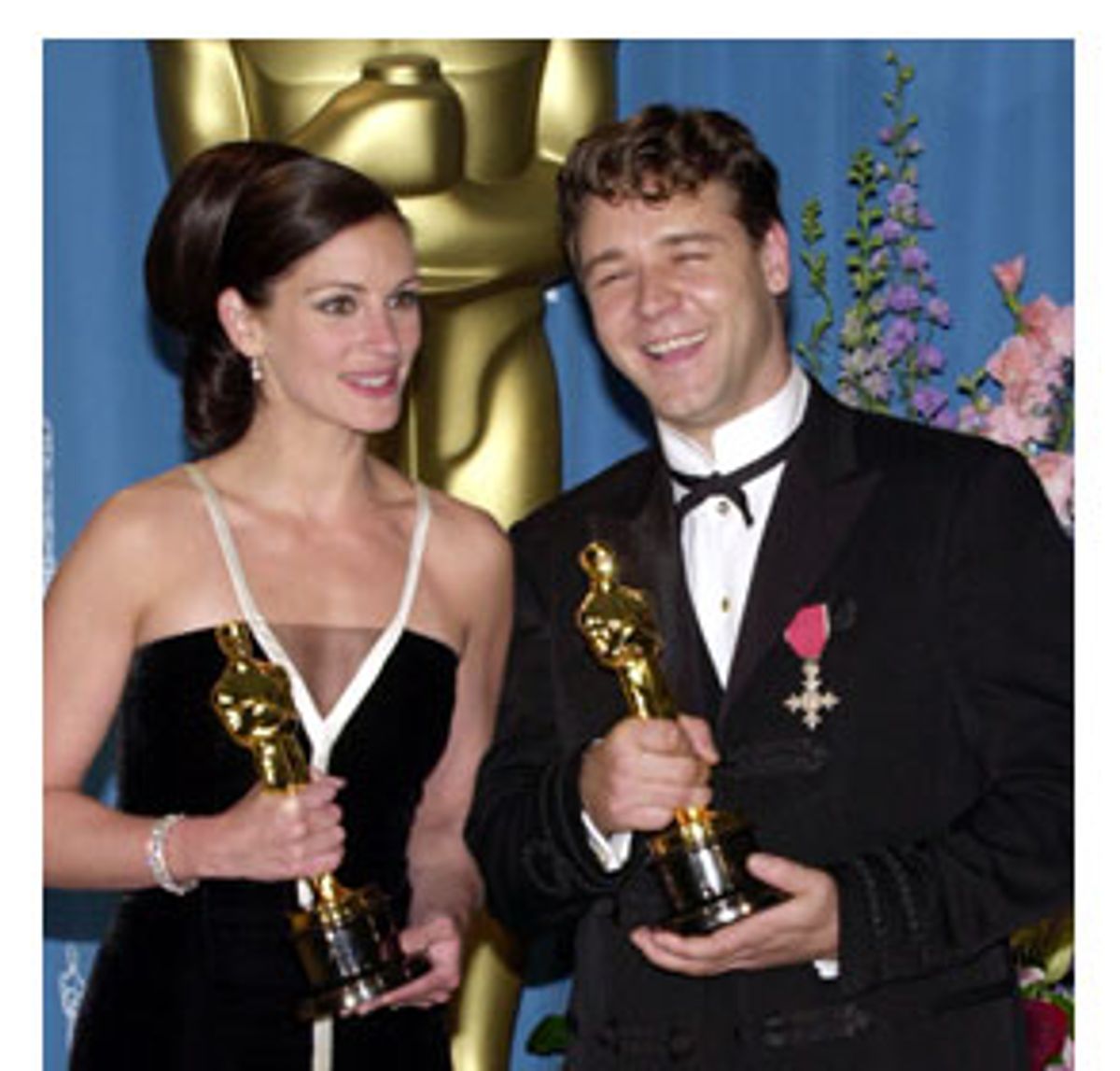 Were there moments in these 73rd Academy Awards? Of course there were. Not even American television, with three-and-a-half hours and 800 million viewers, can entirely suppress the life force. So there was a lovely shot of Danny DeVito, somewhere early in the third hour, bopping away in his seat, chewing on a raw carrot, as Bob Dylan sang his song from "Wonder Boys" live (or as close to live as the ever more weird Dylan can get) from Sydney, Australia. But then, the next time host Steve Martin came on, he rushed into the seats with a bowl of dip for DeVito. Thirty years ago that would have passed as inspired improvisation. But now it makes us feel the carrot was a setup, that DeVito was part of the script and the show.

It was easier to believe in Tom Hanks' contrite face when Martin made some rather long-winded joke about his having been involved in the plot to kidnap Russell Crowe. Hanks could have guessed he was on camera, and in close-up, but the furtive, whispered "Sorry" in Crowe's direction was so well done it let you feel the natural humor in the man. Equally, Crowe's own rather churlish response to Martin's early joke about how the actor had been ready to hit on Ellen Burstyn, made up to look older than her actual age, seemed consistent with the Australian actor's entire demeanor.

And there was an instant when Julia Roberts' calm shattered and she let out with "It feels so great up here," and made efforts to make sure that her dress -- one of the best of the evening (Jennifer Lopez and Sigourney Weaver were runners-up; and Angelina Jolie was a sensation in a white suit) -- was arranged to look good on camera. Like Hanks, Roberts has a direct path into her own emotional energy that accounts for so many people liking her. It shows -- like Judi Dench's unforced laughter when Kevin Spacey thanked her for carrying his mislaid tuxedo across country for the night.

And talking of naked personality, it's not easy to forget the grief and then the very Roman matter-of-factness with which Ridley Scott smothered his feelings at not winning best director. Scott is 63; Steven Soderbergh, who won for "Traffic," is 38. Soderbergh may go on to make better films than Scott, though I don't really think he's done it yet. On the other hand, Scott is at an age when he may wonder how much energy he has left for the immense physical and emotional strain of something like "Gladiator." He looked like a man who felt he had his best chance this year, and even the whooping of the team that produced "Gladiator" (which won best picture and best actor) seemed a touch subdued by its thoughts of Scott.

The academy stayed true to the feelings of so many viewers this year -- not being quite sure whether "Traffic" or "Gladiator" or "Crouching Tiger" was the remarkable movie. "Traffic" won for director and adapted screenplay and for editing, as well as for supporting actor (Benicio Del Toro). "Gladiator" got costume design, sound and visual effects as well as actor and picture. And "Crouching Tiger" won for art direction and music as well as for best foreign picture. It means that all three movies can be advertised for three or four more weeks as Oscar winners.

Another thought grew as the evening wore on. It is, more or less, that young Hollywood doesn't really seem to get the Oscars -- in turn, I wonder if it's a TV show that many kids watch or respond to. No one wants to get pompous about the evening -- dignity somehow seems irrelevant -- but I marvel that Ben Affleck can come on unshaved, and that Tom Cruise (presenting best director) wore an open-neck shirt.

That indifference seemed all the more striking this year when two of the undoubted emotional highlights involved honorary tributes to two men in their 80s, absolutely beyond the knowledge of the general public. Ernest Lehman wrote "Sweet Smell of Success" and "North by Northwest"; he also wrote the screenplays for "Who's Afraid of Virginia Woolf" and "The Sound of Music." Jack Cardiff was a great English cinematographer, at his peak in the 1940s and 1950s with films like "Black Narcissus," "The Red Shoes," "The African Queen" and "The Barefoot Contessa." The quality of Cardiff's imagery was startling and ravishing in just the few clips shown. Lehman's clips were not as rich or generous -- there was hardly anything of Burt Lancaster talking in "Sweet Smell."

Still, the audience stood for both men, not just because of their age or frailty but as if they felt that immediate contact with the old energy of movie glamour. The use of light and words was redolent of an age of cinema in which those were staple qualities in the wonderment of it all. And Lehman stood firm (though holding on to Julie Andrews for support) and delivered a ringing tribute to the Writers Guild. The word strike was never mentioned, but everyone in the house knew what he meant. That's what you hire writers for.

In recent years, such kindness toward veterans has invariably stood out in tawdry or dull evenings. This year, the show had no center and not much heart: Martin never caught fire. He's really too cool for a job that requires Billy Crystal's glee and affection for people. Roberts' win might have meant more if there'd been any doubt over it. Russell Crowe's victory was deflected by his own sourness. And so I think I'll recall Cardiff and Lehman and that other octogenarian, Dino De Laurentiis, who helped Fellini and David Lynch make great films, and who pointed to his latest daughter in the audience -- a beauty and not a day over 7. There you are: You can't beat authentic energy, or escape the fact that the Oscars act and feel like a 73-year-old.