Has Bush doomed his tax cut?

By sowing fear about the economy, the president has opened the door for the Democrats' quick-fix tax plan. 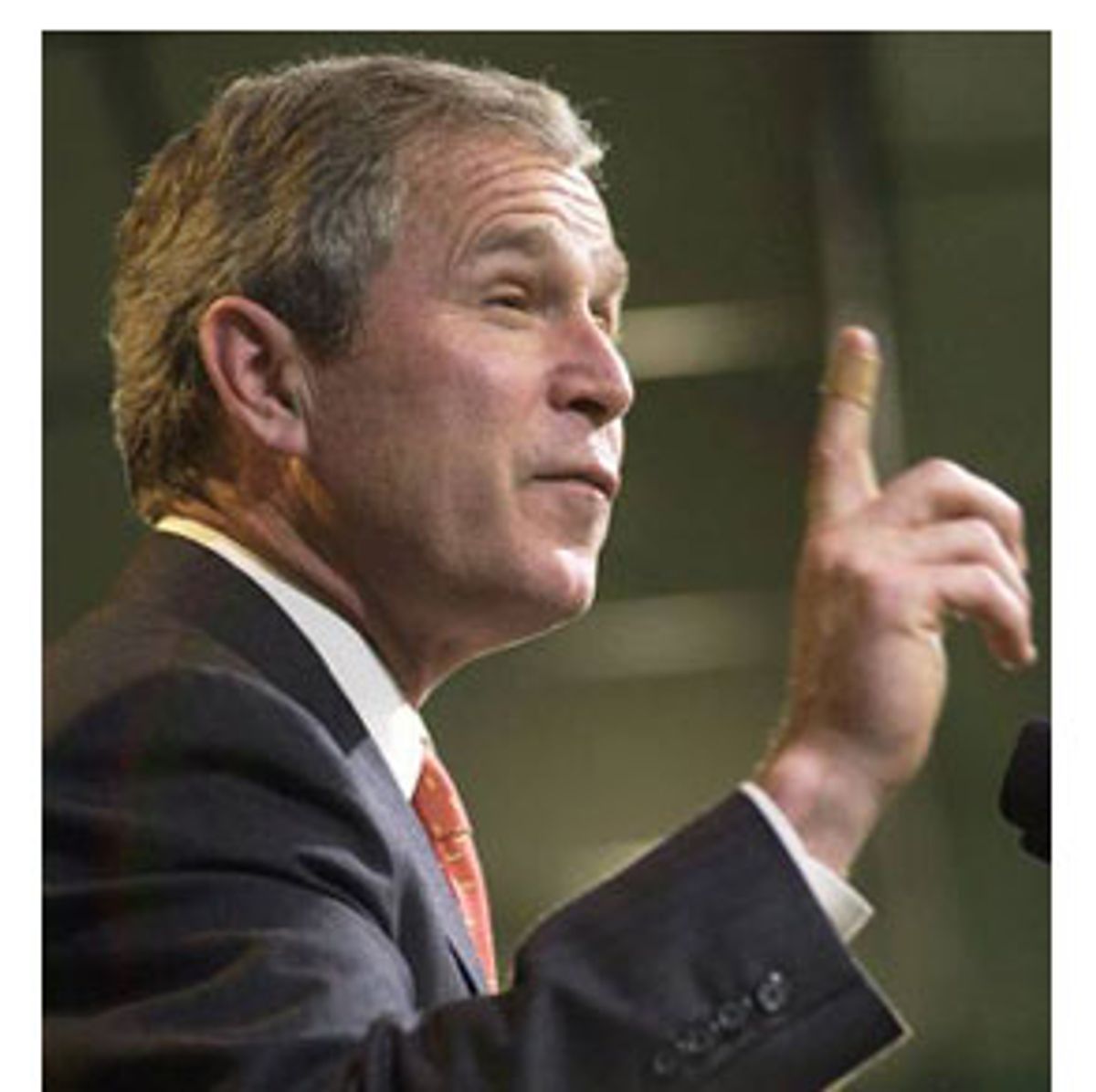 So determined is President Bush to win his enormous, regressive tax cut that he has been willing to damage the national economy if necessary. Over the past few months, the president and his minder, Dick Cheney, already have done such obvious harm by talking down consumer and investor confidence that they're now worried about taking the blame for a looming recession.

Their apparent strategy was to create economic pressure for the Bush tax program by "reverse jawboning." But so far they have managed to undermine their own position, while allowing their Democratic adversaries an opportunity to pass a smaller, more equitable tax rebate in the name of economic stimulus.

Whether Bush can fairly be held responsible for the current downturn may not make any political difference. His conservative defenders will cite various other factors, including the long-term decay of the Japanese economy and the stock-market slide that began last spring. Yet they cannot honestly ignore the importance of the same psychological factors they have so often emphasized in other circumstances, however -- most recently, when they celebrated the 90th birthday of that sunniest of all presidents, Ronald Wilson Reagan.

According to the right-wing catechism, Reagan's happy talk literally rescued the nation from the morose state of the Carter years. Whether you believe that or not, they certainly do. In all the adoring recollections of the conservatives' favorite leader published last month, "optimism" and "optimistic" were the most durable clichis. Reagan hagiographers have always been eager to credit the strong economic growth during his two terms to that intangible force of presidential personality. (They would also claim that his tax cuts spurred growth not only back then but on into the Clinton era, but that's a separate argument.) Reagan smiled, the Dow went up and enterprise bloomed.

Conservatives, of course, aren't alone in stressing the psychic and emotional aspects of the business cycle. Among the most-quoted observations of John Maynard Keynes, the intellectual author of the New Deal, was that "if the animal spirits are dimmed and the spontaneous optimism falters ... enterprise will fade and die."

That truism is what made the warnings of gloom and doom by Bush and Cheney so irresponsible. The more the new denizens of the Oval Office talked trash, the lower consumer and investor confidence fell -- with the result being a sense of emergency created in Washington and on Wall Street. Apparently their intention was to create sufficient fear to clear the way politically for their unpopular tax scheme.

To a degree that may have surprised its authors, this strategy worked. It certainly succeeded in changing public attitudes toward taxes and the budget from last fall, when surveys showed that most Americans preferred to pay down the debt rather than cut taxes.

But like Mickey Mouse's trick with pails and brooms in "The Sorcerer's Apprentice," it seems to have worked too well. The public and political system overreacted. Panicky investors have been calling for instant relief, without lending any fresh support to Bush's 10-year tax-cut program. And in recent days the White House has watched almost helplessly while friends and foes agreed that the Bush plan would have no noticeable effect for a year or more -- and that something else must be done. That probably wasn't what Bush had in mind as he stumped the country promoting his plan.

How did he get himself into this predicament? Proud of being more Reaganite than Reagan, Dubya made an error that the Gipper almost always avoided. Hustling his inequitable tax cut, Bush stressed a pessimistic economic outlook rather than a rosy, Reaganesque "morning in America." In the Republican cosmology, it is pessimists who are responsible for decline.

Meanwhile, the alarms sounded by Bush have opened the way for a faster, fairer and flatter tax cut proposed by Democrats (and a few Republicans). If the aim of cutting taxes is to save the country from recession, as Bush and Cheney claimed, then getting money into the hands of consumers should be an urgent goal. That is vintage Keynesian stimulus economics, aimed at encouraging consumption, and not the Reaganite supply-side doctrine, which calls for cutting taxes on the wealthy to promote business investment.

The Republicans now say they want to tie immediate tax cuts to Bush's plan, yet they may not be able to insist on any such linkage. Democrats who want to vote for tax cuts but dislike Bush's plan can simply accuse the president of holding up needed relief so that he can grease his rich contributors.

How ironic it is that Bush, in his imitation of Reagan's tax cuts, would ignore the optimism that was the foundation of the Great Communicator's political success. And how fitting it would be if, in shoving through his tax cut with destructive haste, he destroys his own scheme instead.