Passed by the Senate, Paul Wellstone's amendment to McCain-Feingold could kill tough campaign finance reform this year. Do the Democrats really want to clean up politics? 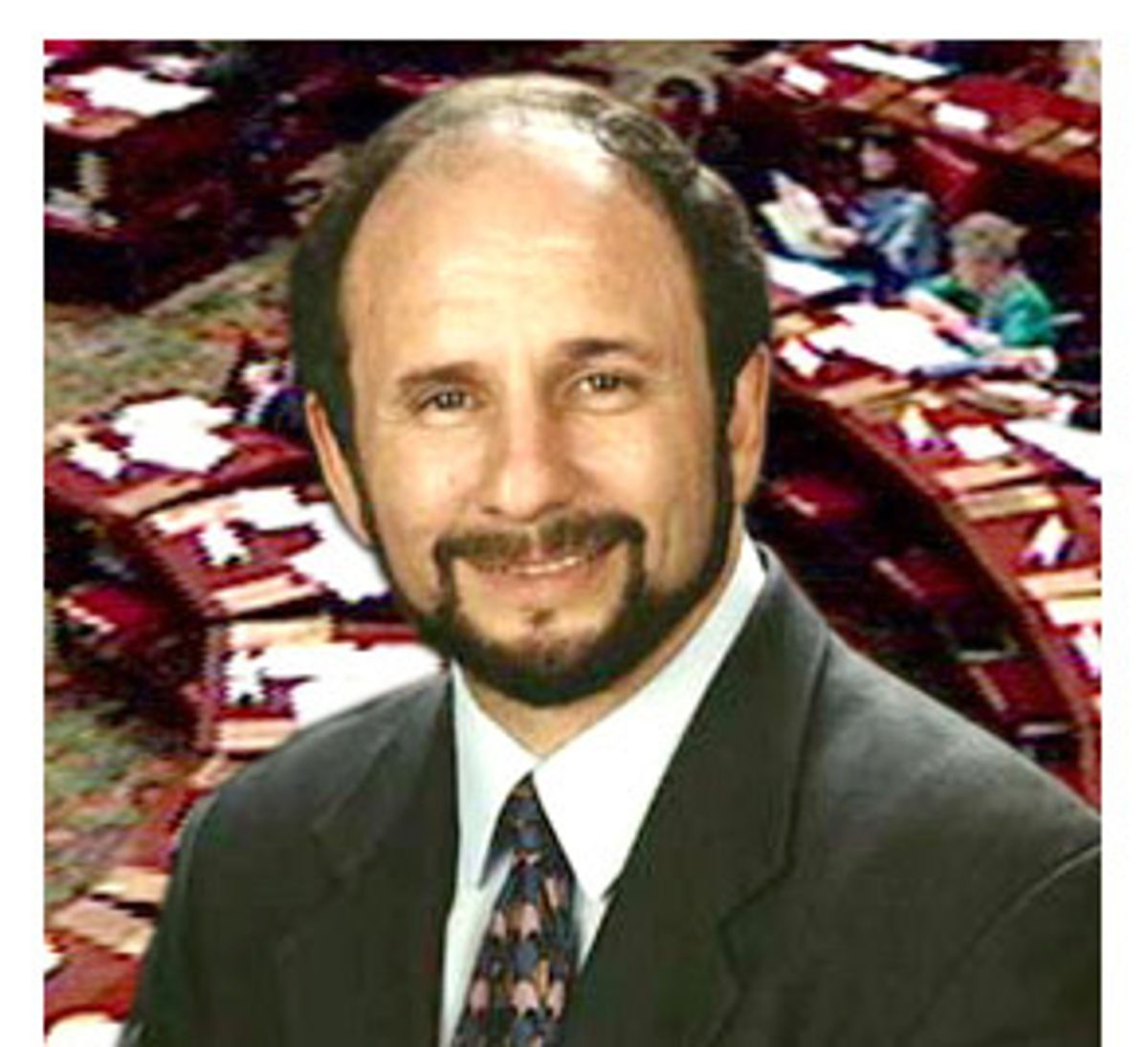 Before McCain-Feingold was even introduced last week, members of the bipartisan team of senators backing campaign finance reform warned that the greatest threat would not come from the devils they knew -- President George W. Bush, say, or outspoken foe Sen. Mitch McConnell, R-Ky. -- but from the devil they didn't know.

But would they have guessed it would be the most liberal senator in the country?

Late Monday, at roughly 7 p.m., after some reporters had already filed their stories for Tuesday's papers, a coalition of 27 Democrats and 24 Republicans supported an amendment to the McCain-Feingold campaign finance reform bill offered by Sen. Paul Wellstone, D-Minn. Opponents of McCain-Feingold like Senate Majority Leader Trent Lott, R-Miss., and Sen. Mitch McConnell, R-Ky., joined with self-proclaimed campaign finance reform champions like Wellstone and Sen. Barbara Boxer, D-Calif., to pass the amendment, which extends a ban on a certain type of political TV advertising.

But the amendment, McCain-Feingold strategists say, is constitutionally dubious, and its support was produced by senators with only one intention: to sandbag their bill.

"We were sucker-punched," said a McCain-Feingold strategist Monday evening. "It's a completely cynical attempt to kill the bill without fingerprints, so Democrats can feign piety."

The Wellstone amendment would expand the part of the bill -- penned by GOP Sens. Olympia Snowe of Maine and Jim Jeffords of Vermont -- that bans certain independent groups from running TV ads within 30 days of a primary election, and 60 days of a general election. The Snowe-Jeffords provision had exempted certain groups from the ban, nonprofit groups classified by the IRS as C-4's, ones permitted to engage in electioneering activities -- as ruled by the U.S. Supreme Court in the 1986 case Massachusetts Citizens for Life vs. the Federal Election Commission. Wellstone's amendment thus takes the Snowe-Jeffords provision into territory that has already been judged to be constitutionally questionable.

This makes the bill vulnerable to a pending "non-severability" amendment -- which Bush has requested -- that would dispose of the entire McCain-Feingold bill should any part of it be thrown out by Chief Justice William Rehnquist and his brethren.

So what, exactly, was Wellstone thinking when he put forward his amendment? Wellstone spokesman Jim Farrell was quick to defend his boss's amendment. "This is a reform measure," Farrell said. "It closes a major loophole. The soft money is just going to shift to sham issue ads if we don't close the loophole."

By allowing C-4s to remain exempt from the ban on sham issue ads, Farrell says, soft money would allow "the NRA and the Christian Coalition and, to a lesser extent, the Sierra Club to come into an election three weeks out and drop a million dollars. This amendment stops that from happening."

McCain-Feingold supporters counter that, whatever Wellstone's intentions, adding C-4s to the bill is "gonna make it real hard" for it to stand up in court. "Most lawyers will say it's not constitutional." He further noted that this isn't the first time that Wellstone's purist stand on an issue worked at odds against a reform bill. McCain saw Wellstone and the left flank of the Democratic caucus vote for an amendment to McCain's 1998 omnibus tobacco bill offered by Sen. Judd Gregg, R-N.H. Gregg's amendment removed all liability limits for tobacco companies, a boondoggle for trial lawyers and left-wingers like Wellstone that made final passage impossible. Which was, of course, Gregg's point.

Meredith McGehee, legislative director of Common Cause, said that similar "mischief" was going on here, noting the support for the Wellstone amendment by Lott and McConnell.

"People on the other side are very opportunistic and they know if they're patient they'll get an opportunity. And Wellstone gave them an opportunity, and he knew and he didn't care. He can do what he believes but he got used," McGehee said. She noted that on there are members of Congress on the House side who share Wellstone's principles, but who "understand that you can pontificate, or you can legislate, and they choose to legislate."

"It's guys like Wellstone who hurt the cause of reform far greater than Mitch McConnell," the McCain-Feingold strategist said. "The purists are what Lenin called 'useful idiots.' They end up doing more damage to the cause of reform than the most vicious opponents."

Other Democrats that the McCain-Feingold coalition had been eyeing warily, like Sens. John Breaux of Louisiana, Patty Murray of Washington (new chairwoman of the Democratic Senatorial Campaign Committee, in charge of reclaiming a Democratic majority in 2002), Ben Nelson of Nebraska, Bill Nelson of Florida, Bob "the Torch" Torricelli of New Jersey and Tom Harkin, D-Iowa, and a new member of this crew, none other than Sen. Hillary Clinton, D-N.Y., joined in the fun, supporting the amendment despite entreaties from the bill's supporters, Sens. John McCain, R-Ariz., and Russ Feingold, D-Wis.

According to one Senate staffer, Minority Leader Tom Daschle, D-S.D., and Dick Durbin, D-Ill., were reportedly on the Senate floor, quietly urging Democrats to support the Wellstone amendment. When it came time to vote, however, Durbin supported the amendment, while Daschle, remaining above reproach, voted against it.

"The Democratic leadership simply doesn't want to ban soft money," said the strategist, noting that last year Democrats achieved near-parity with Republicans in raising the unregulated, unlimited party cash known as "soft money." "That's as clear as anything to me now."

One senior Democratic Senate staffer, however, pooh-poohed any conspiracy theory. "There's no question that the thing's a big concern to a lot of Democrats," he said, "but there's a difference between saying that and saying they want to kill it ... I don't think there's any grand scheme for the Democratic caucus to be split on this in a way to foment the demise of campaign finance reform. I don't think these guys are the great chess players that everyone makes them out to be."

Both Wellstone spokesman Farrell and the McCain-Feingold strategist could agree on one matter: The move now increases the significance of the vote on the "non-severability" amendment requested by the president, which would nullify the whole bill if any part were found unconstitutional.

"The ultimate vote on whether you're a reformer or not is severability," Farrell said. Curiously, Wellstone isn't even necessarily going to support McCain-Feingold. Farrell said that Wellstone is unhappy with discussions of raising the "hard money" - contributions directly to candidates -- limits from their current levels, despite the fact that such levels haven't been adjusted since they were established in the post-Watergate reforms a quarter century ago. Additionally, the so-called "millionaire's amendment" offered by Sen. Pete Domenici, R-N.M., last week -- raising contribution caps when a candidate faces a self-financed millionaire -- annoyed his boss, as it potentially brings more money into the process.

Moreover, Farrell said, that provision might also end up before the Supreme Court. Indeed, Farrell sounded irate that both McCain and Feingold supported the Domenici amendment. "Domenici is not an improvement," he said.

Farrell also suggested that Wellstone might actually have brought more support to the bill, since Breaux voted for it and spoke in favor of it on the Senate floor.

The McCain-Feingold strategist anticipated two possible outcomes after Monday night's vote. Either "you'll see a different group of Democrats vote for non-severability, and that's how they're going to kill it, in the courts."

Or, he said, by passing an amendment that makes the McCain-Feingold bill that much more despised by conservative groups, the Democrats may be trying to force Bush to veto McCain-Feingold, winning a campaign issue for 2002 while maintaining the pretense that they support a soft money ban. In the past, the National Right to Life Committee opposed previous incarnations of McCain-Feingold because it included the same restrictions passed by the Wellstone amendment. That made the support for the removal of such exemptions from conservative GOP senators -- Rick Santorum of Pennsylvania, Jim Inhofe and Don Nickles of Oklahoma, and Bob Bennett of Utah, among others -- that much more cynical an exercise.

But the GOP is not the party that McCain-Feingold supporters are complaining about after the Wellstone amendment.

"The Democrats are now the dishonest party," groused the McCain-Feingold strategist.

If you asked the average Republican campaign finance reform opponent who voted for Wellstone's amendment why he did so, the strategist went on, "he'd say,'Sure, I voted for it because I want to kill the bill.' At least he's honest. For the Democrats it's either willful ignorance or just downright duplicity."