Denis Leary shines as a burned-out cop in "The Job"; Chris Isaak is as dull as dust in his Showtime comedy. 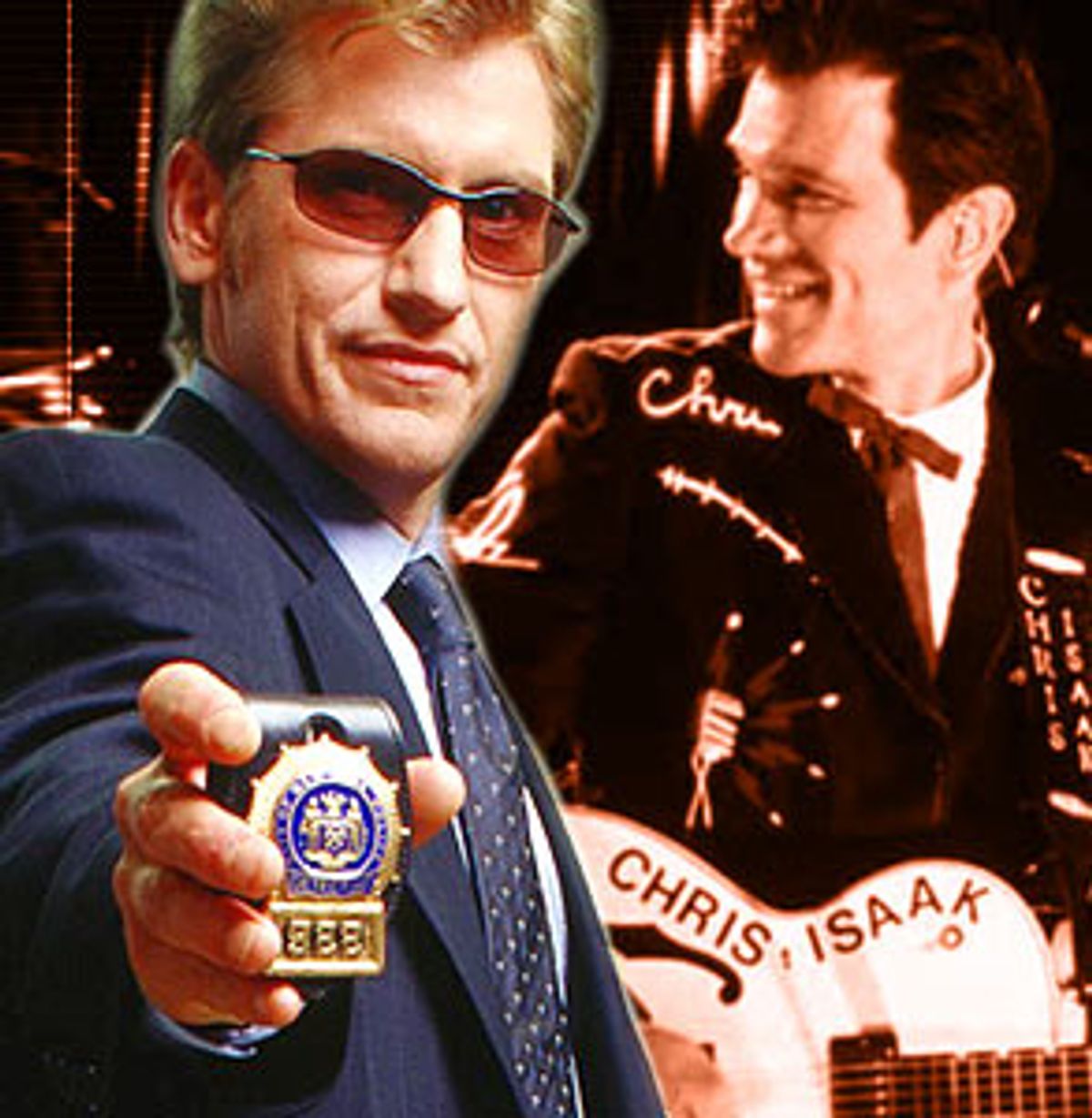 Oh, I'm sorry, you've been a terrific contestant, but the correct answer is "The Chris Isaak Show," Showtime's new hourlong sitcom starring the semipopular San Francisco rocker as himself. It's an understandable mistake, though. In a blind taste test, the premise of "The Chris Isaak Show" could easily be mistaken for CBS's "Bette," which in itself is pretty alarming, since Isaak is supposed to be a hepcat and Bette Midler is, well, Bette Midler.

There's no getting around it: "Bette" was a debacle. Even on the elderly-skewing CBS, the sitcom's retro setting -- "big star with an improbably average home life," a throwback to 1950s shows starring Jack Benny and George Burns -- just didn't fly. Maybe Midler couldn't reach a fan base beyond, as David Letterman so diplomatically quipped, the "over-50, gay, male" set. Or maybe the problem was that those of us who adore Midler the balls-out, bawdy vaudevillian couldn't bear to watch her whittled down to a PG-rated diva who faked catfights with Dolly Parton and warbled that frickin' "wind beneath my wings" song for the millionth time. Maybe Midler really belongs on cable, where success is measured in smaller numbers and she could have unleashed her full Divine Miss M glory, raunchy Sophie Tucker jokes and all.

Come to think of it, maybe CBS should have signed up Isaak instead. You'd think he'd be a network demographer's dream, since he's so popular with women. True, he's no spring chicken. But how could he not skew younger than "Bette"? If you took out the gratuitous and not very interesting cuss words and naked stuff, "The Chris Isaak Show" would be ready for prime time -- even ready for CBS.

Executive-produced by Diane Frolov and Andrew Schneider ("Northern Exposure"), "The Chris Isaak Show" has been compared to "The Larry Sanders Show" because of the celebrity drop-in factor (Minnie Driver, Stevie Nicks, Joe Walsh and Poison's Bret Michaels are among the guest stars playing themselves). But "The Chris Isaak Show" is no acerbic love/hate letter to stardom like "Larry Sanders"; there's no backstage dish, no wild rock star livin'. Yes, Isaak regularly consults naked oracle Mona (Bobby Jo Moore) for relationship advice. (She's modeled after a nude woman whose swimming image is projected into a fish tank at a San Francisco nightclub called Bimbo's.) But Mona is the most humorless, buttoned-up naked woman you've ever seen. "The Chris Isaak Show" gives us a portrait of a rock star whose life is every bit as dull as our own -- maybe even duller. Now, I ask you: What fun is that?

I've always found Isaak's rockabilly pop just a bit too tidy, his pompadour a bit too unmussed, his sparkly suits a bit too fetishistic, his lonesome-crooner pose a bit too, well, posed. And in "The Chris Isaak Show," Isaak is every bit the priss you'd expect from a guy who has his name spelled out on his guitar and his guitar strap.

In the show, Isaak is an earnest and sensitive chick magnet. He aims to please, but women are always storming out of his bedroom in a huff while he stumbles after them with a big question mark hanging over his head. When he's not being dumped, he lounges around the house in perfectly pressed jeans and shirts tucked in just so; he looks like Ricky Nelson waiting for the gang to drop by so he can play them his latest hit single. Chris is so square, his idea of a stiff drink is a tall, cool glass of Tang. He cheerfully makes small talk with his nonfamous neighbors. He puts out his own garbage cans; they have his name on them, just like his guitar. The guy may be a rock star, but, good Lord, he's a crashing bore.

Of course, Isaak is doing shtick here, playing up the "rock star next door" angle the same way Benny played up his penny-pinching image. And Isaak does have a folksy-klutzy sort of normal-guy charm. When a date asks him how he came up with the idea for his song "Blue Hotel," he looks into his creative soul and, amusingly, finds nothing there except a sign that says "Gone fishin'": "I was staying at this hotel, and it was blue. Painted blue. And ... the rest is history."

"The Chris Isaak Show" is a game attempt at shaking up sitcom formula. But at an hour long, it seems to go on forever. Isaak is too bland to really punch home the dry wit or convey the swirl of emotions that accompany the plot twists, which usually hinge on his panic or self-doubt. Isaak's real-life Silvertone bandmates, however (drummer Kenney Dale Johnson, bassist Rowland Salley and guitarist Herschel Yatovitz), have a neat diamond-in-the-rough likability; think Silvio, Paulie and Big Pussy on "The Sopranos." The cast of amateurs is padded with a couple of professional ringers -- puckish Jed Rees as horny, spaced-out keyboard player Anson and Sarah Jessica Parker wannabe Kristin Dattilo as Chris' ambitious manager Yola. They both seem to get more screen time than Isaak.

I've seen four episodes of "The Chris Isaak Show," and it still doesn't hang together as an ensemble comedy; its multiple story lines exist in their own private worlds and seldom converge. It would be a better show if Isaak united the people around him, or against him, the way Larry Sanders did (and Larry David does on HBO's celeb-reality sitcom "Curb Your Enthusiasm") by virtue of an outsize persona. But you know what the problem is, don't you? Chris Isaak is just too gosh-darned normal.

The abject failure of celebrity sitcoms like "Bette," "The Michael Richards Show," John Goodman's "Normal, Ohio" and "The Geena Davis Show" may have gotten all the ink this season, but, for me anyway, the more dismal development was the tanking of David Milch's dark, obtuse CBS cop drama "Big Apple." Now, I should say that I am a sucker for dark, obtuse cop dramas. But I just couldn't get inside "Big Apple." Maybe it was the impenetrable, murky FBI vs. NYPD office politics; maybe I just can't buy Al Bundy as a cop. I have had a jones for smart cop dramas through shows legendary ("Hill Street Blues," "Homicide: Life on the Street") and almost forgotten ("EZ Streets," "Brooklyn South"). But I fear "Big Apple" has just about cured me of the addiction.

Which brings us to "The Job," ABC's dark, obtuse cop drama masquerading as a half-hour comedy. Created by star Denis Leary and "Larry Sanders" veteran Peter Tolan, "The Job" may be a trendsetter for producers who ever want to do celebrity sitcoms (or New York-set cop shows) again.

Rather than just sticking Leary in front of a camera and praying for magic (hello "Geena"), somebody took the time to figure out how to exploit Leary's wiseass, surly personality in a role that makes sense. So we have Leary as Mike McNeil, a hard-drinking, chain-smoking, pill-popping, overextended New York police detective with a sweet wife in the suburbs and a sophisticated mistress (who happens to be African-American) in the city.

Leary's McNeil is emphatically cynical; he's not just burned out, he's nuked. His upstanding partner, "Pip" (after Gladys Knight's backup singers) Phillips, played with adorable earnestness by Bill Nunn, warns McNeil that his pain-pill habit is bad, bad, bad. To which McNeil snaps, "That box and a bottle of Bushmills is the only thing keepin' me from takin' hostages, OK?" McNeil is like Andy Sipowicz with a sense of humor and better suits. And right now, given the devolution of "NYPD Blue" into unbelievable sappiness, I'd rather watch cop frustration and despair played for edgy laughs than crocodile tears.

"The Job" features "NYPD Blue"-style raw language and a jerky hand-held camera style straight out of "Homicide." In fact, it plays like "Homicide" with the dramatic scenes removed and just the morbidly funny parts left in. (Leary sports a pair of tinted Richard Belzer eyeglasses, perhaps in homage.) The stellar ensemble cast, especially Keith David (Mary's combustible stepdad in "There's Something About Mary") as the squad's short-fused lieutenant, makes the most of Tolan and Leary's spiffy dialogue. "The Job" is surprisingly solid. There's nothing here you haven't seen before -- but you haven't seen it quite in this way.