"The Tailor of Panama" 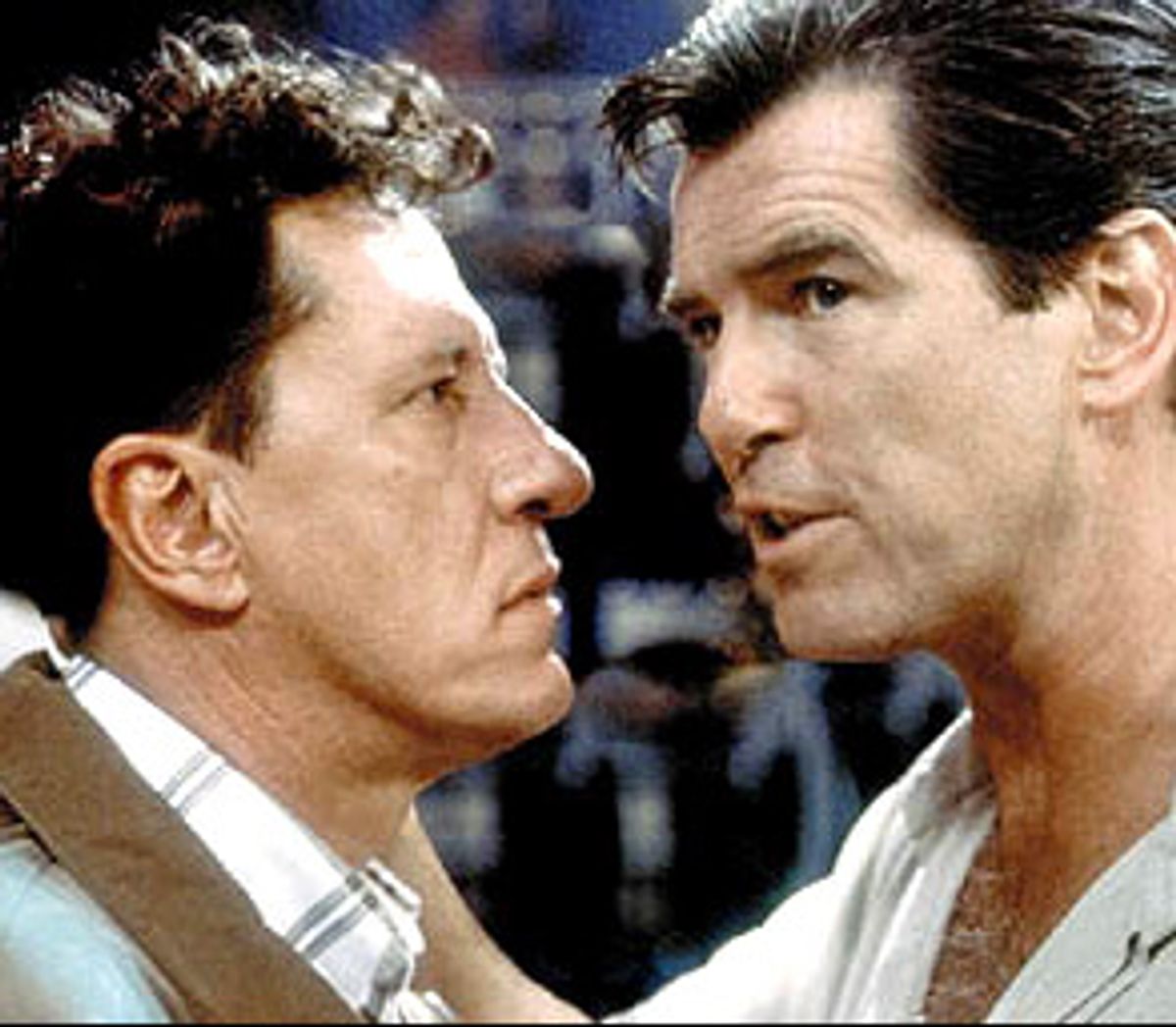 Watching "The Tailor of Panama" feels a little like seeing some strange, exotic bird alight in front of you. John Boorman's film of the John le Carré novel is a sophisticated, subtle adult entertainment that is also a compliment to the audience -- it expresses faith that it will be at home with the tricky, shifting tone.

As strange as it is amid the surrounding fauna, this bird has a lineage. Le Carré's 1996 novel is itself a gloss on Graham Greene's "Our Man in Havana"; Boorman's film recalls Carol Reed's marvelous 1960 film of the Graham book. They're both about innocents who cause chaos in a setting of tropical corruption. Graham's story was about a vacuum cleaner salesman (played in the film by Sir Alec Guinness) recruited by British intelligence. He's desperate for the extra money the part-time spying brings his way but he can find nothing to report on. So he makes up stories and feeds them to his intelligence handlers. The arrangement works well until his stories lead to real intrigue and real death.

Le Carré introduces another layer: a disgraced British intelligence operative named Osnard who is sent to Panama as his last chance to redeem himself. (Boorman and Andrew Davies adapted the author's screenplay for the film.) Looking for someone with access to the country's elite, Osnard (Pierce Brosnan) settles on Harry Pendel (Geoffrey Rush), Panama's most exclusive tailor.

Up to his eyeballs in debt after spending an inheritance on a failing farm, Harry needs the money Osnard can funnel his way. And Osnard is happy to use the bits of insignificant information Harry gleans from his tony clients to ensure his own future. Spurred by self-interest and Harry's tidbits, Osnard concocts news of a "silent opposition," a group that plans to clean up the layers of corruption the United States left behind after snatching Manuel Noriega.

Osnard has leverage to get Harry's cooperation. The spy knows that Harry's tales of being descended from Savile Row tailors is a lie, and that his late revered partner, who has the WASP-y name Arthur Braithwaite, was actually Harry's late Jewish Uncle Benny (played amusingly, in flashback, by Harold Pinter). Benny taught Harry the trade, and Harry did five years in prison for burning down a shop so Benny could collect the insurance. It's something he has never told his wife, Louisa (Jamie Lee Curtis in a warm, believable performance), and since he worships her he's determined to keep the information from her.

"The Tailor of Panama" is a charade of two men using each other for their own ends, one of them (Harry) more likable than the other, but neither of them exactly innocent. The film is what Greene classified as an "entertainment," though the tone (dramatic as well as moral) is considerably trickier than what that word might imply. The potential for real danger isn't extricable from the tone of sophisticated irony, and since neither Harry's nor Osnard's motives are pure, "The Tailor of Panama" may throw audiences who want their reactions clean-cut. The fun of the picture is in the slyness the actors bring to the ever-shifting situation (there are good bits from Jon Polito as a swindling banker and Dylan Baker as a gung-ho U.S. general), and in the palpable pleasure Boorman takes in his own ability to juggle tones. Remember those funhouse sidewalks that moved up and down and back and forth as you attempted to walk them? Boorman directs the movie like a man who has learned to tap-dance on one of the contraptions without ever missing a step.

The movie straightforwardly, almost offhandedly, paints Noriega as a Frankenstein's monster created by George Bush when he was head of the CIA and then dispatched when the general's rampant greed made him an embarrassment. It's typical of the movie's casual bluntness, its certainty that adults can take a cold-eyed, witty entertainment without having to be coddled. Boorman uses Panama as a sort of petting zoo for the moneyed corrupt. Noriega's gone but the wealthy are still getting rich from the schemes he presided over. These people know they're dirty, but their money and Harry's clothes, not to mention their own thimble-deep consciences, help them ignore the stench. But these are also the people whom Harry has to court and flatter in order to do his business. Any thoughts that this is going to be a story about reawakened ideals in the midst of corruption is given the kibosh early on. And in case we have any doubts, Boorman provides a juicy kicker: Brosnan's Osnard quotes the final line of "Casablanca" with a coolly cynical flip. The only beautiful friendships here are of the quid pro quo variety.

"The Tailor of Panama" doesn't have the coiled force of Boorman's last movie, "The General." It's a relaxed, dapper piece of gamesmanship and, as with every movie Boorman has made since "Hope and Glory," it reveals new talents while extending the themes that have always concerned him. Boorman has been skeptical for so long about the moral refinements Western civilization pretends to that he's way beyond being shocked by the corruption of the Panamanian ruling class.

There's a sly amusement, tinged with a faint repulsion, that Boorman hasn't shown before. He regards Harry's clients in something of the same way Luis Buñuel regarded the rich in his final films. And Boorman escapes the clichés that usually bedevil Western directors shooting in foreign locales -- he doesn't romanticize or judge. Where most directors would present beggars winding their way through stalled traffic, or people living in rooms that are practically on the sidewalk as Third World squalor, Boorman and his cinematographer, Philippe Rousselot, see teeming, and not necessarily hopeless, life.

Boorman must have been attracted to this material because it's a story about storytellers. The "artists" in his films, the people who set about bringing their visions to life, have been dreamers, wizards, thugs, bullshit artists. Harry Pendel's whole life is a story -- Cockney Jewish apprentice/arsonist posing as Savile Row expatriate. And he does something of the same for his clients with his flattery, helping them create the vision of themselves that they want to see. Harry is creating out of whole cloth in more ways than one.

And it's his yarn spinning, his flattering descriptions, that inspire Osnard to, in his reports, transform Mickie Abraxas (Brendan Gleeson, the star of "The General," in a sweaty, passionate, bearishly untidy performance) from a drunken former resident of Noriega's prisons to the leader of the silent opposition. Gleeson, along with Curtis and Leonor Varela, as Harry's right-hand woman Marta, give the movie some human weight. They're a reminder of the cost of the games Harry and Osnard are playing; the movie might seem too cynical without them.

At times "The Tailor of Panama" could use some more narrative drive, but Boorman's work with his cast couldn't be better. Brosnan so gleefully defaces his James Bond image that his performance is something of a shock. (At one point at the screening I saw, he uttered a crude euphemism for the female anatomy and you could feel the temperature in the room drop.) Osnard is a vulgarian opportunist at heart, and Brosnan embraces the character's grossness. He seems to be having a good time teasing the audience into waiting for a glimpse of Bond's suavity or sense of duty. It never comes and the self-satisfied smile on his face, the one that invites us to complicity in Bond movies, starts to feel like an affront, even dangerous.

Rush would seem to be all wrong for playing an ordinary man. Guinness was so good in "Our Man in Havana" precisely because he excelled at the madness of ordinary men. He conveyed it delicately, subtly. You get the feeling that had it been possible for Guinness to whittle down his acting to nothing more than the gleam in his eye he would have. Rush, on the other hand, is a showman. (That's why he was so good as the Marquis de Sade in "Quills.")

Rush makes that work for the part because Harry's job calls for him to be a showman, cajoling his clients. The poignancy of Rush's performance is in the way Harry sloughs off his willingness to please and begins to reckon the consequences of his actions, how he replaces false bonhomie with real heart. (The scenes between Rush and Curtis are some of the most authentic marital duets in recent memory.) Rush looks wonderful in his impeccably tailored suits, every crease and bend just right. "The Tailor of Panama" is about how Harry's surface elegance works its way inward. Rush makes it a perfect fit.