Is there a biological guarantee that your child will love you? Not yet. 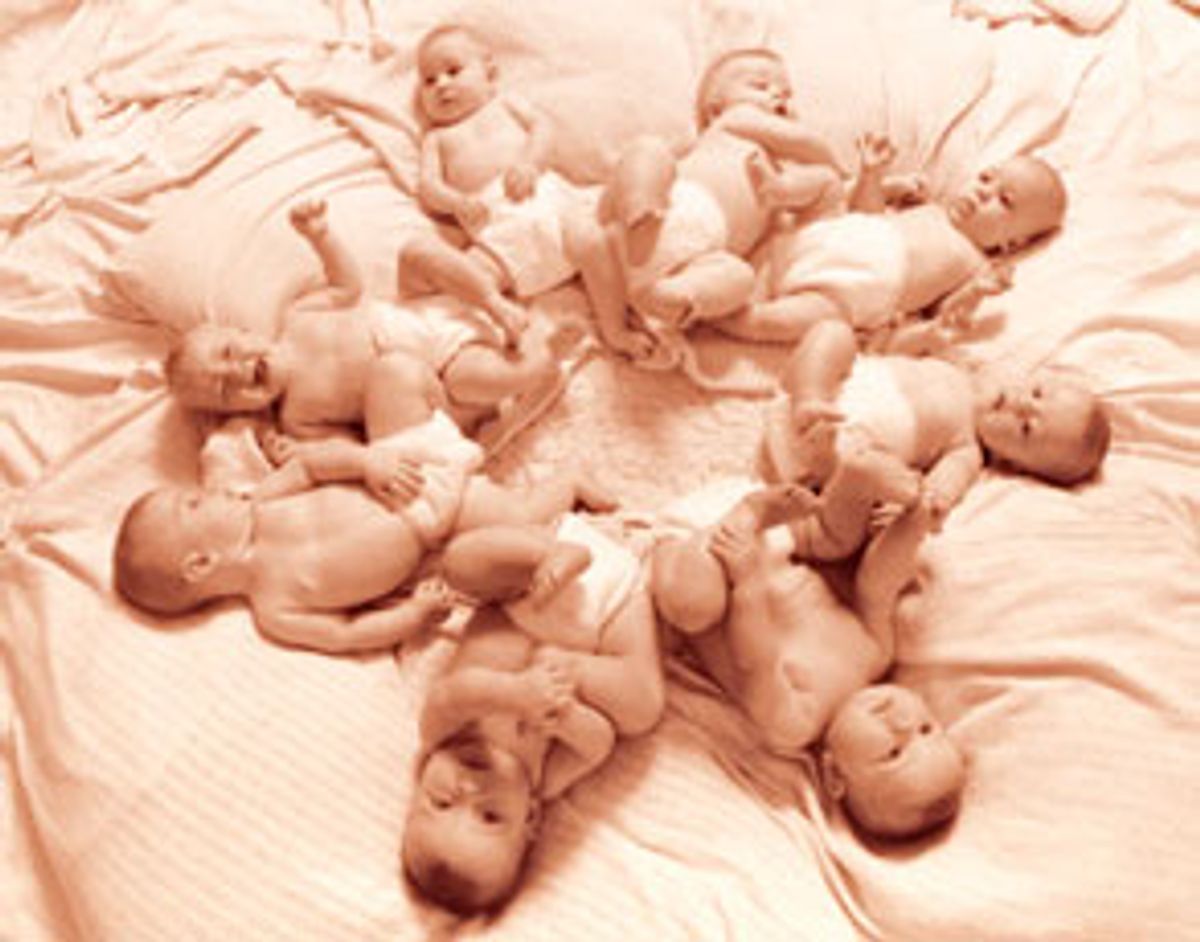 Get ready for battle. That's what friends and family, and all those concerned strangers, should have told me. Not about the sleep deprivation or the Moro reflex or the funny breathing. The first few months of caring for a baby are like being under attack: Pitched fevers of hyperactivity require your constant attention; then sudden moments of edgy silence ensue as the baby sleeps and you gather your strength for the next onslaught.

Most of us will admit, however, that it is worth it. A great passion overwhelms us and grows for our children as they grow up. We simply take the emotional steps necessary to do this and never turn back. We begin to utter those words and we wait for the moment when they will say them back to us. The smiles and coos work for a while, but eventually we need a bigger return on our investment. We need to hear those words. I love you.

But this is a dubious event, with no prescript guiding our children to it, no law stating that a child must declare love for his or her mother or father or anyone else -- with or without conditions. What if Murphy's law ruled, and all the diapering, bathing, feeding and playing led to just a sort of mild appreciation?

We are all familiar with what happens when a child is deprived of maternal love (or love of any kind) during those crucial developmental years -- the possibility of physical debilitation, mental illness and even psychosis. But what of a mother who is deprived of a child's love? The bleak possibility leaves me feeling inept and afraid. Each day my son and I visit tiny traumatic experiences, unavoidable really, but I wonder if they make a lasting impression, deep enough to wipe away any growing feelings of affection.

Love is obviously a dominant trait among human beings. As a biologist, I have wondered if there might not be a gene that controlled it, spread it throughout the human population and made it subservient to the principles of heredity. But this was wishful thinking on my part, less the hypothesis of a scientist than the optimism of an insecure mom.

Actually, the idea is not so far-fetched. The Human Genome Project is making great strides in helping to uncover genes for numerous social behaviors or, rather, aspects of human behavior that were once relegated to the realm of sociology. For example, we have laid claim to the discovery of genes for shyness, aggression, depression and homosexuality. (As an aside, I should mention that, as with most things, how genes are expressed is a far more complex process than a term such as "the gene for shyness" implies. But there is no space here for a lesson in genetics.)

Some 25 years ago, in his book "Sociobiology: The New Synthesis," Edward O. Wilson combined evolutionary biology and animal behavior to posit the historical reasons for the existence of various social behaviors in all organisms exhibiting them -- slime molds as well as humans. He used the tenets of population biology, ordered by natural selection and biological fitness, to look at societal comportment. As for love, he interpreted it as a part of self-sacrificing behaviors like altruism and prolonged child care, and, of course, as a component of sex. (He continued developing his unifying theory in "On Human Nature," published three years later, in 1978).

The Human Genome Project, in many regards, is the molecular equivalent of sociobiology and even, to some extent, social Darwinism. But because of its pop science flavor and purported medical benefits, it does not have the same negative buzz as either of its predecessors. Sociobiology and social Darwinism both were contentious issues and afflicted in their time. (Maybe because of statements such as this: "The pattern of parental care, being a biological trait like any other, is genetically programmed and varies from one species to the next," taken from Wilson's text.)

But both sought to find biological reasons steeped in evolutionary theory for our social characteristics and the conduct that they entailed. While social Darwinists might postulate that the most fit members of a population are more likely to be shown the general behaviors attributed to love, and therefore have the highest probability of surviving the brutal design of nature, sociobiologists would say that the capacity to love is simply inherited.

Even though sociobiology never became vogue exactly, many biologists eventually warmed up to the ideas, albeit tweaking and interpreting them in a new and modern way. For Wilson, love was bound up in sex and altruistic behavior. For his scientific siblings, it may be bound up in histones and DNA.

And then there are those who believe love to be spiritual, mysterious and bound up in something not nearly as concrete as genes. For the deeply religious, like my mother, love is a ruling aspect of our lives, meant to guide us on the path of righteousness. For them it is a unifying thread for all humanity, binding us all in its sticky web. My mother believes that children are born with love like they are born with God. She could be right or she could be in what I call a state of biological denial. My mother, like most people, may not want to accept the idea that what she feels so strongly for her children and what her children feel for her are caused by proteins, synaptic firings and bodily fluids.

A friend of mine is of the opinion that a child's love does not exist at all. (Nor does it blossom between two unrelated persons, according to her.) She thinks a child's love is an emotional attachment, and there is some truth to this. Parents act as anchor and stability in a world that must seem very large and very chaotic to a newborn child. Caregivers are the first to give security and comfort -- and they are loved for it. Later on, many of us will find new "love" attachments, with religion, work, a family of our own or even a bowl of soup. For my friend, maternal affection is the only true expression of love. But if you combine her opinion with Wilson's theory, then no love remains at all, and this is a disheartening thought.

Perhaps novelist Haruki Murakami has found the key. In his short fiction "Man-Eating Cats," he describes an adulterous affair not in terms of mere love but as total and complete empathy. Murakami implies that when we say "I love you," we mean "I empathize."

And this makes sense. The child who is with his or her mother day and night for months and months would eventually have to identify emotionally with that mother. It is entirely possible that, as humans, we may empathize more than we love, truly understanding what others are going through in this life, the unbearable weightiness of mere existence.

Still, I want to hear my son say it, whether or not he can define it or clarify its origins. They haven't found a gene for love or even begun looking for one as far as I can tell, but part of me hopes that they will. This is the only thing that gives me solace on those long, fussy days, when I question the why and what of this new journey I have undertaken. Rather than delve into the chapter on "Parental Care" or "Group Selection and Altruism" in Wilson's text, I'd rather rest my mind on this thought: He has to love me; it's in his genes.