Infertility makes me do the darnedest things. 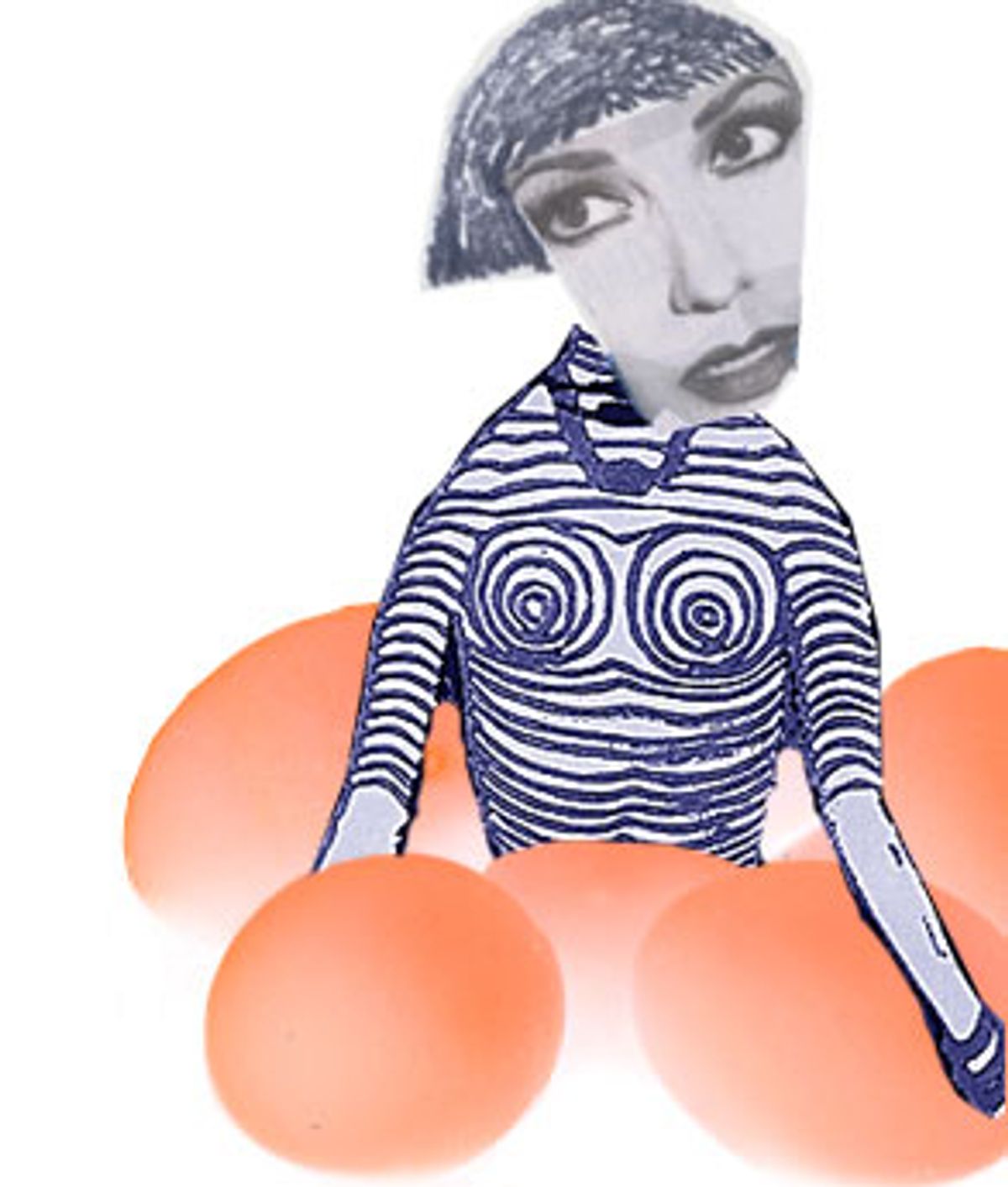 There are, in infertility circles, certain practices that are only hinted at with the most reverent secrecy. They are bizarre things that you can do that have, if you believe the rumors, worked for some people, though most won't confess to having tried it themselves. There are homeopathic remedies, superstitious rituals (like buying tampons to make sure that your period won't arrive) and little science experiments that "just might work." If you are like me, you usually decide, hell, it's worth a shot.

This is how I found myself at the grocery store, contemplating putting egg whites in my vagina. I have been told, and I have read (which makes it seem even more possible), that using egg whites as a lubricant can aid errant sperm to their proper destination. This is particularly important for users, like myself, of the beginner-level fertility drug Clomid, which stimulates ovulation. Clomid has the ironic side effect, in some women, of drying up cervical mucus, the normal medium through which sperm travel to the egg. No cervical mucus equals no pregnancy, or so I'm told.

There are other options besides egg whites for producing good quality cervical mucus -- some women swear by simply drinking more water. Others have tried, and recommend, guaifenesin, the mucus thinner found in decongestants (though it's important, if you try it, to use only guaifenesin, straight up, with no decongestants, because they will dry up mucus). There are herbal remedies, too, but I'm too chicken to mess with that -- who knows if some herb will trigger some other irritating problem with my reproductive system? So, having tried the more traditional solutions with no luck, I decided that the next step is egg whites.

The first particularly helpful piece of advice I receive, from a participant on an infertility bulletin board who has tried egg whites, is: Use them at room temperature. Immediately grateful that I wasn't the person to discover that rule, I make a mental note. Someone else mentioned the possibility of salmonella (egads, I hadn't thought of that either), and so I think "pasteurized." I'm pretty sure I don't know how to pasteurize an egg, so I say a little prayer that such a product already exists.

Then I'm at the grocery store, and it occurs to me that there isn't any particularly sexy way to apply the egg whites. Does he wear them, like normal lubricant? Sounds terribly messy. Do I use a turkey baster? Too clichi, and reinforces the kitchen-slave image. A spoon? Too metallic. A spermicide applicator? Hmmm ... maybe, but would that jinx things? A yeast infection medicine applicator? Yes, that would work, and it does have the bridesmaid's dress reusability factor.

But after much deliberation, I decide on a medicine dropper. Same idea as a turkey baster, but smaller, and more clinical. OK then.

On to the egg department, where they do, in fact, sell little cartons of pasteurized egg whites. "Does this look right?" I ask my husband. "How should I know?" he says. The carton says: "Great for cakes, frostings, cookies, French toast, meatloaf, quiche, batters and coatings for baking or frying! Wonderful scrambled, and for tasty protein fruit drinks! Due to pasteurization, not recommended for meringue or angel food cake." (I am directed to use pasteurized "Whippin' Whites" for my meringue or angel food cake. I momentarily contemplate the imagery evoked by "Whippin' Whites" and decide, no, not tonight.)

In the checkout line, I remind myself that there's virtually no way the clerk could put together what I'm going to do with a medicine dropper and egg whites. She's probably not even paying attention, right? I have a flashback of buying condoms in college -- the surge of adrenaline that is both pride in and embarrassment at my own sexuality.

At home, I take an ovulation predictor test to make sure tonight's the night. I love these tests because there's at least a chance that I'll see two lines. Sure enough, Operation Egg White is good to go.

As I write, I'm waiting for the egg whites to get to room temperature. I poured out a few tablespoons from the carton, and put the rest in the fridge (waste not, want not). The crucial dollop is currently downstairs on my kitchen counter, in a Pyrex dish, covered with Saran Wrap. My plan is to fill the medicine dropper before things get started, so I can whip it out at just the right moment, if there is a right moment for egg whites during sex.

I am absolutely certain that the only way to get through infertility is by being able to laugh about it once in a while. I am constantly plagued by clueless people who say, "If you'd just relax, you'd get pregnant," "Stop thinking about it, and it will happen," or, worse, "Well, really, you're lucky ... I'm just fertile Myrtle: If my husband LOOKS at me, I get pregnant!"

I take my temperature every single morning, I take at least one pill a day to regulate my hormones and I've already been through more than one humiliating and uncomfortable test. But even though we've been trying for almost a year, I'm still just a beginner at infertility. I'm several months and a half dozen tests away from anything as expensive or as invasive as in vitro fertilization or injectables.

So I'm trying to look at this egg white thing as fun, an adventure (it's very "9 1/2 Weeks," don't you think?), an opportunity to make it interesting. Besides, having a plan, however ridiculous, takes some of the pressure off thinking about the next step, and it feels like a good omen -- after all, egg whites represent fertility. Or is that egg yolks?

Whatever. It will be a damn good story for the grandkids.

Kate Edwards is a pseudonym for a blushing and not-yet-pregnant writer whose stories appear frequently in Life.