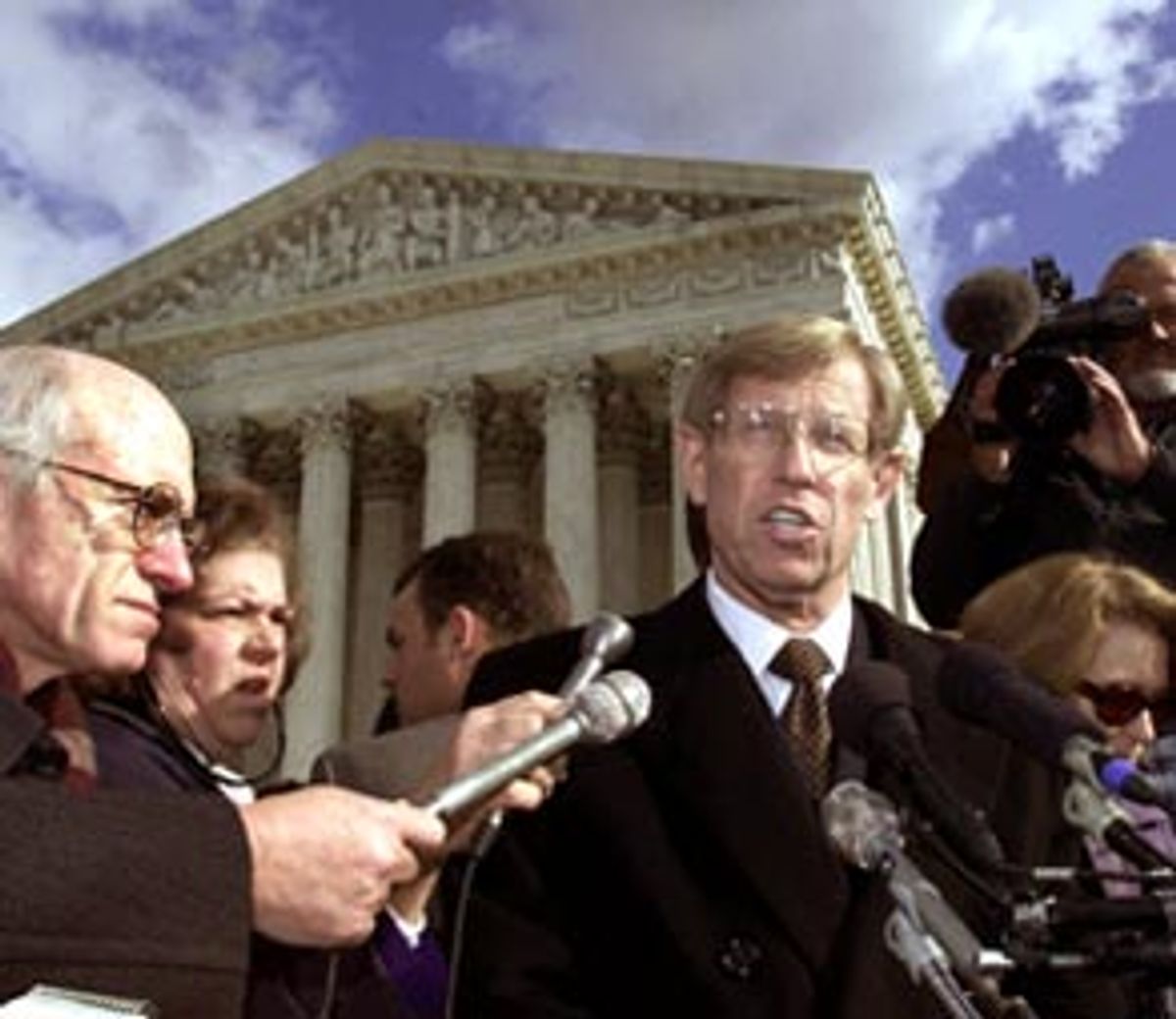 At first glance, the UPI story that ran Sunday about Solicitor General-designate Ted Olson and his link to the American Spectator's "Arkansas Project" looked like an April Fool's joke. It was April 1, after all, and the UPI article, slugged as "news analysis," was immediately flagged by the Drudge Report -- the favorite Web page of the credulous right wing. And the story, dispatched over the wires by the Reverend Sun Myung Moon's very own news service, included some truly comical assertions.

In the opening paragraph, for instance, the UPI piece said that while "the origins of the 'Arkansas Project,' the years-long investigation of former President Bill Clinton financed by reclusive billionaire Richard Mellon Scaife, may still be murky to most people ... prominent Washington attorney Theodore Olson's involvement appears to have been minimal or nonexistent."

This is an important issue, explained UPI legal affairs correspondent Michael Kirkland, because Olson faces confirmation for the powerful post of solicitor general in a Senate evenly split between "friendly Republicans and Democrats with blood in their eye," a situation in which an "unexplored connection to the 'Arkansas Project' might prove toxic." In fact Olson's appointment is scheduled for a hearing in the Senate Judiciary Committee Thursday.

Noting that Olson has previously denied any involvement with the shady operation, Kirkland's article went on to claim that it is questionable whether the Arkansas Project itself even existed -- and quoted Spectator editor R. Emmett Tyrrell saying, among other things, that the project's name was "a joke by one of the guys in the [Spectator] office ..." He also is quoted calling the Arkansas Project "a jocose misnomer. It didn't exist."

Now, Tyrrell regards himself as an irrepressible wit, and here he seemed to be yanking the pant leg of a gullible reporter. For if there had been no Arkansas Project, then why did newspapers and magazines publish stories about the Scaife-funded operation over the past three years without any denial from Tyrrell or anybody else at the Spectator?

Consider an excerpt from one of those articles, published several months after the original exposure of the supposedly nonexistent enterprise: "The Arkansas Project was financed with the $1.8 million [from] two foundations controlled by Richard Mellon Scaife, the putative leader of the right-wing conspiracy, made available to the [American] Spectator for its own journalistic purposes ... In turn, R. Emmett Tyrrell, Jr., the Spectator's editor-in-chief, decided that the money would be used to finance an investigation into Whitewater and other Arkansas malfeasances." That's from a column by John Corry in the June 1998 edition of ... Tyrrell's own American Spectator. Corry went on to disclose that the magazine's publisher, Terry Eastland, assisted by auditors, "has been conducting an internal review of the Arkansas Project." Nothing "jocose" about any of that.

The UPI article traces the source for Ted Olson's "alleged connection" to the Arkansas Project to "The Hunting of the President," a book I co-wrote last year with Gene Lyons, and to a Salon article that I wrote with other reporters in 1998. Both the Salon article and the book mention a meeting at the Washington law offices of Gibson, Dunn & Crutcher, a law firm where Olson serves as managing partner. According to two confidential sources who told me about that meeting, Olson himself was present, along with David Henderson and Stephen S. Boynton, the pair of conservative activists who would soon become the Spectator's main contractors for the Arkansas Project.

The Salon article reported the date of that meeting as "early 1994," but that date was corrected in the book because the sources who were there later recalled that it actually occurred earlier than that, in late November 1993.

Olson has denied that the meeting ever took place, and Tyrrell offered a similar denial to UPI, which reports that he "firmly contended that Olson was never connected to the Arkansas Project in any way." Tyrrell added, "Just in terms of chronology, I known I didn't know him [Olson] in 1993, and that's when the project began. I don't think I knew him in '94. I think I knew him in '95 but I'm not sure."

It's too bad that Tyrrell hasn't reviewed the Spectator's own internal reports, since they would surely have improved the accuracy of his recollections. He definitely knew Olson before February 1994, when the Spectator published a piece titled "Criminal Laws Implicated by the Clinton Scandals," a lengthy catalogue of alleged felonies by Bill Clinton, Hillary Rodham Clinton and various Clinton associates. The byline on that piece was "Solitary, Poor, Nasty, Brutish & Short," the magazine's fictional (and jocosely named) law firm. The actual (and self-confessed) authors of that brutish, nasty piece were Ted Olson and an associate at Gibson, Dunn named Douglas Cox.

The forgetful Tyrrell could also look up an "expense analysis" spreadsheet of the Arkansas Project, prepared by the magazine's own financial officers on June 30, 1995, for the previous fiscal year. That document shows payments to writers David Brock, James Ring Adams and Daniel Wattenberg, as well as to Arkansas bait-shop owner Parker Dozhier, Boynton and Henderson. Also listed among the legal expenses paid by the Arkansas Project between March and August of 1994 are four payments to Olson's firm -- Gibson, Dunn -- that total more than $14,000.

At that time, the linchpin of the Arkansas Project was David Hale, the crooked former Little Rock judge who had accused Bill Clinton of pressuring him to make an illegal $300,000 loan that supposedly benefited the Whitewater land development. From the fall of 1993 on, Hale was spending much of his time with Dozhier, Boynton and Henderson.

Perhaps not coincidentally, as Hale has testified in federal court, he hired Ted Olson to represent him in December 1993, when he expected to be summoned by congressional committees investigating Whitewater. [Aside from his ideological activism, Olson is among the top lawyers in Washington; among his clients is former President Ronald Reagan.] It's also worth noting that the first payments for the Arkansas Project began to flow to Henderson and Boynton on Dec. 1, 1993.

Almost four years later, the covert scheme came to a sour conclusion with the firing of the Spectator's founding publisher, Ronald Burr. During the spring and summer of 1997, Burr had worried about the poor accounting of the project's funds provided by Henderson and Boynton. When Burr continued to insist on an independent audit of the Arkansas Project by the accounting firm of Arthur Andersen, the Spectator's board of directors held a secret meeting at Tyrrell's suburban Virginia mansion on Oct. 5, 1997, where Burr was dismissed and removed from his position as secretary-treasurer of the American Spectator Educational Foundation, the nonprofit that published the magazine. He was replaced in that post by Olson.

In an Oct. 6, 1997, memo Burr sent to Tyrrell, he recalled that the fatal dispute had begun "on July 10, 1997 at Ted Olson's office." He then went on to recount their arguments over how and whether to conduct a "fraud audit" of the Arkansas Project. It was a subject Tyrrell had summarily dismissed a week earlier in a memo to Burr stating, "I do not want a 'fraud' audit of any project. I do not want any further audits until I have examined our accounting of the Arkansas Project ... This issue is now closed." No apparent kidding in that correspondence, either. (See "The American Spectator's Funny Money".)

The secrecy that had once shrouded the project and its billionaire sponsor began to lift after Burr's firing, which outraged many of the Spectator's staff and supporters, such as humorist P.J. O'Rourke, who resigned from the magazine. A few months later, when reports about the Scaife-funded project appeared in the New York Observer, Ted Olson told me that he and other members of the Spectator board were conducting an "internal analysis" of the Arkansas Project. "We're moving at the proper speed, as far as I'm concerned," he said.

The complete results of that internal probe have never been made public. Burr himself has been unable to comment on any of these events, including Olson's involvement, because of a non-disparagement clause in his severance agreement with the Spectator. But if any senators really are interested in what George W. Bush's nominee for solicitor general did to undermine the Clinton presidency, they could ask Burr to testify before the Judiciary Committee. They could seek the sworn testimony of other present and former Spectator staff as well. They could request (or subpoena) the documents that indicate Olson's involvement. They could demand the release of the Shaheen Report, which examined David Hale's involvement with the Arkansas Project as part of a Justice Department investigation. And they could ask Ted Olson to tell them, under oath, whatever he knows about the project.

Unfortunately, the Senate Democrats seem to lack their opponents' appetite for such partisan inquisitions. They will probably give Olson a pass. But any senator who ventured to ask the hard questions would quickly discover that the Arkansas Project was no joke.