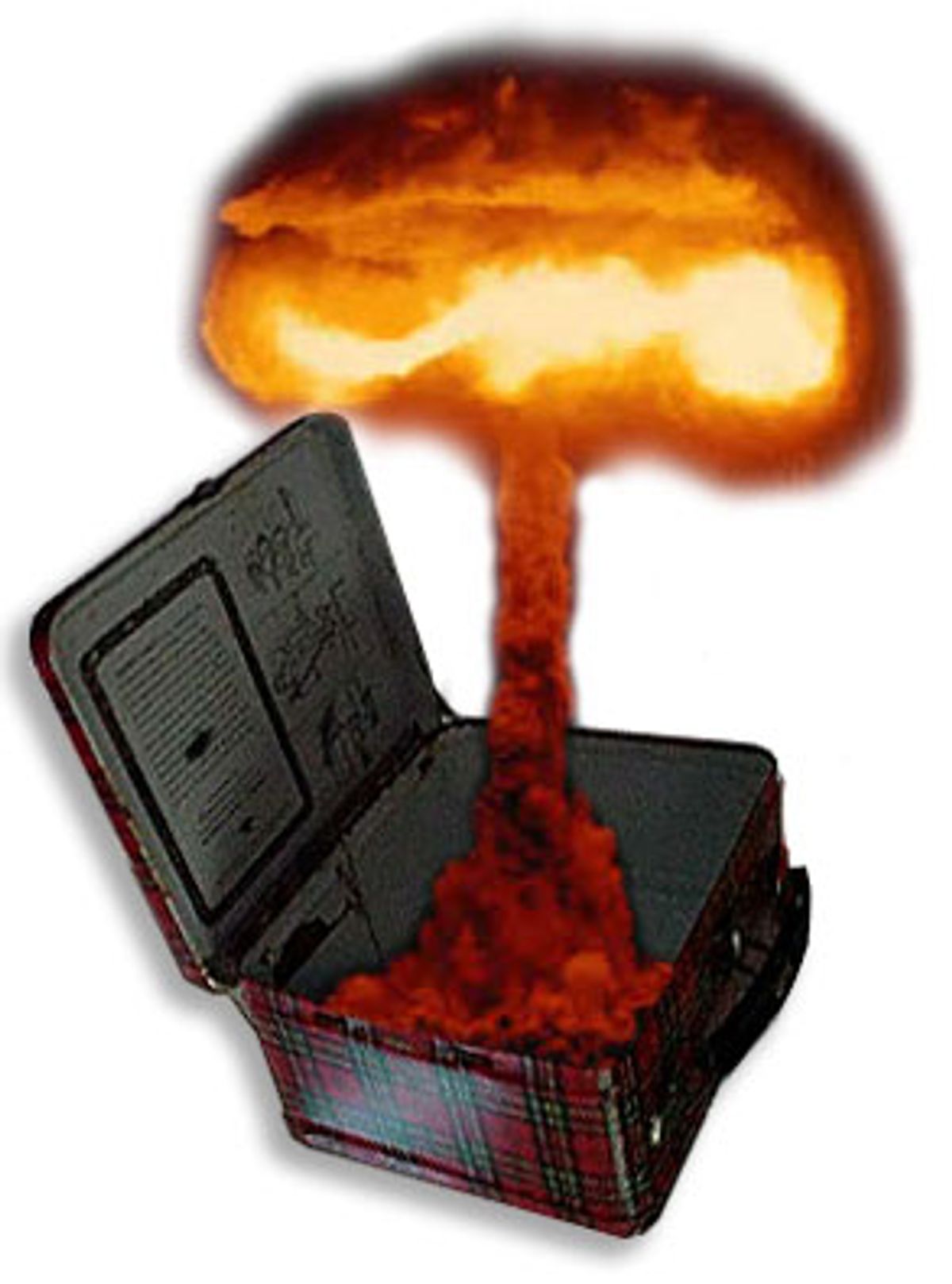 My heart skipped a beat when I read that the Bush administration would stop testing for salmonella in beef served in school lunches, opting instead to allow kiddie cafeterias to flip irradiated burgers. It just might work, I thought. This could finish what then-President Ronald Reagan's "ketchup is a vegetable" kerfuffle started a scant two decades ago.

Here's what I thought: George W. Bush just might be the guy to put healthy food on the menu in our nation's schools. It would be unintentional, of course, but that hardly matters. If it worked, we would still be willing to give him credit. (We are opinionated, but magnanimous.)

Ironic, no? Here's a guy whose recent decisions concerning the environment have led many a consumer, be they Democrat or Republican, to have certain suspicions about his concern for our welfare. To be frank, between the arsenic, the carbon dioxide and the slashing of health programs for children, it has felt like he is trying to rub us out.

But this school lunchmeat thing, despite its scary bacterial theme, I saw as a step in the right direction, and here's why: The national school lunch program -- forced to compete with infiltrating purveyors of fast food -- is the nutritional equivalent of an oil spill. This country's schools are awash in high-salt, high-fat, low-fiber, preservative-filled, formerly frozen food. The muck-covered cormorants in this disaster are not birds but frequently obese children whose insides are coated in fat, clogged with refined carbohydrates and laced with various chemicals that flavor or preserve their meals. The barge carrying the well-disguised toxins in this mess is skippered by a whole crowd: On the poop deck are officials of the federal and state governments and, staring out to sea from the lower decks, blissfully ignoring the trailing pollutants, are parents.

So it was my diabolical belief that the introduction of irradiated hamburgers -- which the government promised would not be served without parental notification -- would be the Exxon Valdez of the federal school lunch program. I thought that parents who had no problem with a school-supplied diet of fast food, soda and candy might be shocked, or at least confused, by the radiation reference and begin, in this heightened state of awareness, to take a look at the steady ruination of their children's health by way of school lunches.

Alas, the decision to stop testing school beef for salmonella and start irradiating burgers was hastily abandoned when the Bush folks discovered that such a plan was, as Sen. Richard Durbin, D-Ill., put it, "a hard one to sell." White House spokesman Ari Fleischer, racing to repair the breached comfort level, blamed the plan on "the lower level of the Department of Agriculture," and promised that the department's concern "will be to make food supplies for our children as safe as possible."

I say: Don't believe the hype. Sorry as I am that the idea of healthy school food will not be burned into the national consciousness by a conflagration over nuked lunches, I cannot give up hope that this blip will turn a few heads. And I would hope that if parental heads are turned, they might focus on people like Nancy May, supervisor of food services for the Healdsburg Unified School District.

As the school lunch czar of a smallish school district about 40 miles north of San Francisco, May is herself something of a blip. But she is an articulate and convincing blip (and, I must confess, a friend of mine) who is leading a crusade (along with high-profile mentor and premier chef Alice Waters) to bring healthy food to schools.

This is a concept that doesn't seem in need of a crusade -- maybe a letter home, but not a revolution -- but, as it turns out, it does. Food service is the one area where schools can make money; every other department spends it. So, schools rely on the food service budget to produce revenue at the expense of children's health. This is why schools have contracts with Taco Bell, Coke, Pepsi and Domino's Pizza: The food requires no labor at the school site, it's cheap and a sure sell -- to kids, and, believe it or not, to their parents.

"Because of the culture, the times we live in, this is how people eat and this is how people feed their children," says May. "For so, so many kids, this is all they've ever eaten. They have a total disconnect from food, from freshness, from food's connection to the Earth, even."

And for this reason, she adds, "A lot of people strongly believe that you can't get kids to eat anything different. Even food service people often have the mind-set that 'kids won't eat it if it's healthy.'"

And that, May and other frustrated pioneers of healthy school food will tell you, is wrong. In fact, they can prove it.

In the past three years, May has quietly introduced fresh-cooked meals made with fresh food at Healdsburg schools -- and the kids have eaten it up. Using a school garden (cultivated with grant money) and government commodity foods, which many districts reject because you have to cook them, May has served school lunches of roast chicken and new potatoes, rice pilaf, cucumber salads, vegetable sticks with almond butter or ranch dressing dip -- mouth-watering stuff -- and two things have happened: The participation in the school lunch program has gone up 30 percent, even among full-paying students, and May has come in under budget.

"They eat it and I have the numbers to prove it," says May. "They like, appreciate and purchase fresh-cooked meals made with high-quality fresh fruits and vegetables. Kids will always respond well to respect and attention -- and it's reflected in the bottom line."

And that's just the part that America's CEO needs to hear. The other developments, which have only a peripheral impact on revenues, include the obvious benefits of bringing food cultivation and preparation into the school curriculum, as well as the sea change in the morale of food service workers that comes from their actually cooking at schools as opposed to just reheating burritos and dodging empty soda cans.

These days, May is looking to involve local growers of food in the school food service plan, a move that has flourished in a few other districts, like Berkeley, Calif., where Alice Waters is the guardian angel of the Edible Schoolyard at Martin Luther King Middle School. Ever the business-minded penny pincher, May is hoping to find ways to encourage the feds to kick in a bit more for school lunch reimbursement, so that she can compete with fast-food purveyors on campus while delivering delicious, nutritionally rich meals in the bargain. Her latest pet project is pushing for federal subsidies for local farmers who would provide schools with fresh food and off-site learning opportunities.

So, as a mother, I am compelled to ask, Mr. President: Does a government plan to help schools provide healthy meals sound so bad? Is it going to kill you to feed our kids a few baby carrots dipped in almond butter? Heck, there are countries that would kill for an opportunity like this! And besides, how do you know you won't like it if you haven't tried it?