Today the sports moniker game's not about identification, it's about intimidation. Just ask the Raging Drag Queens, the Syphilitic White Missionaries or the Declining Test Scores. 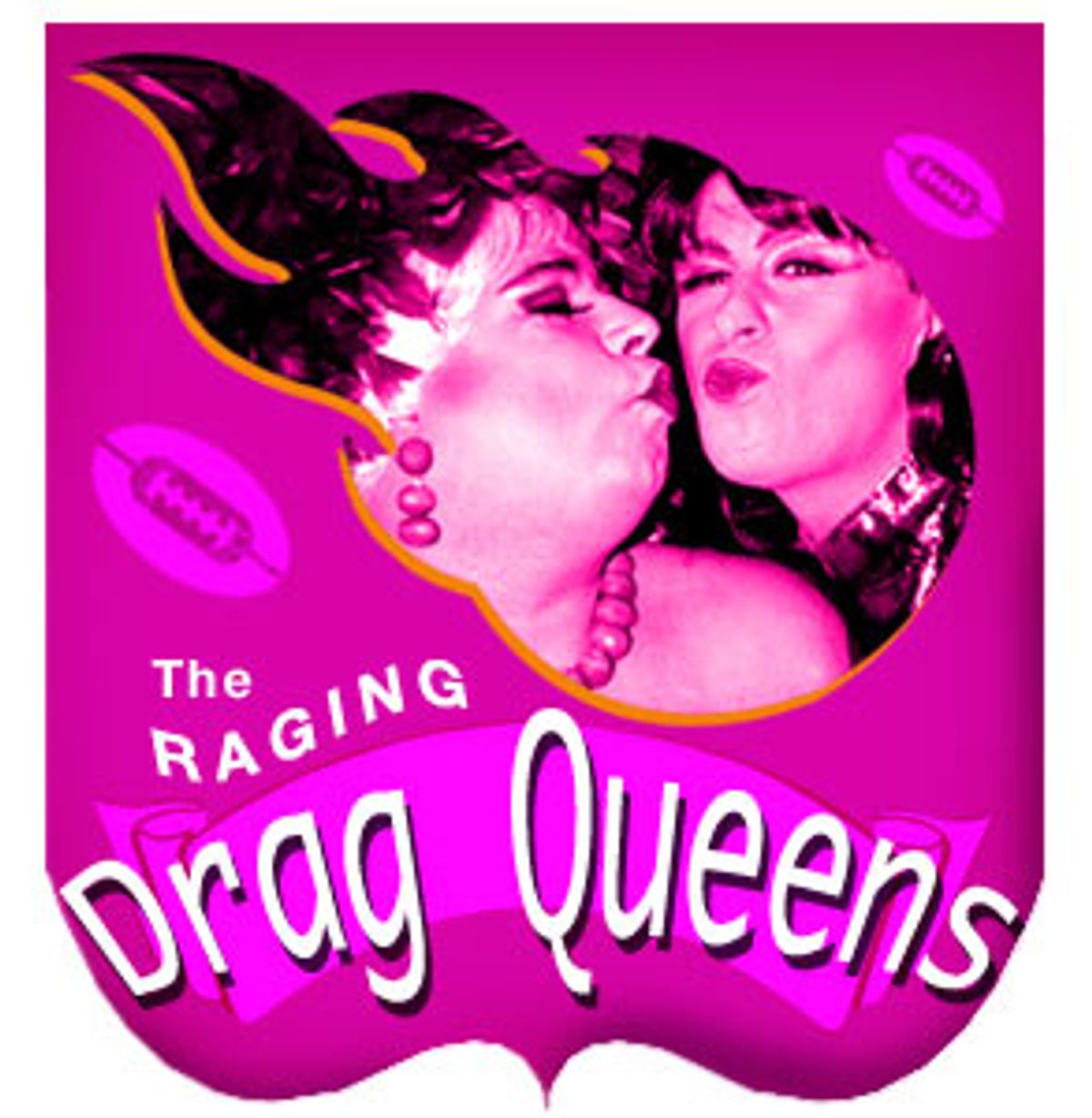 HONOLULU (AP) -- A University of Hawaii official has conceded that the school nixed the football team's 77-year-old rainbow logo because of concerns about its homosexual theme ... instead of the Rainbow Warriors, the team will now be known as the Warriors.
--Associated Press, July 28, 2000

HONOLULU -- A Honolulu State College official denied today that the school had nixed the football team's request to change its name from the Fighting Tigers to the Raging Drag Queens.

"It's true a vote was held, and it's true the students overwhelmingly favored Raging Drag Queens," said the official, who asked to be unnamed. "But the name was not submitted through proper nomination channels, so it doesn't count as a request, and neither do most of those others. Properly nominated choices included Tiger Team, Fighting Tigers, Tiger Gladiators, Just Plain Tigers, Savage Geckos, Tiger Tsunami and More Than One Angry Mongoose -- and of those, Fighting Tigers got the most votes."

Fighting Tigers received only four votes, the official conceded. He declined to give totals for Raging Drag Queens or other disallowed names.

"Fighting Tigers is a sucky name," said the football team's spokesman, Vincent Lom. "There are no tigers in Hawaii, and nobody's scared of them. We want a name that speaks of our awesome terrifying might, and in our experience, almost everyone in the league is terrified of homosexuals and cross-dressers, so Raging Drag Queens would be a perfect name for us. Plus, we were hoping we would be allowed to share locker rooms with the cheerleaders."

Lom said that although the team had its heart set on Raging Drag Queens, they would have settled for other disallowed names that did well in student voting, such as the Huge Violent Gays, the Aunt Nancy Men or the Recruiting Squad.

Lom said his personal suggestion for a scary team name, the Drunken Tourists, did not do well in the voting. "I don't know why. It gives me the fear."

RED FIELD -- Red Field Indian High School officials denied today that the school's football team had changed its name from the Mighty Bobcats to the Syphilitic White Missionaries, but a student body representative appeared on local cable news holding a banner with that name in block letters.

Johnson asked Rock Deer how students could defend the use of a stereotyped image of Caucasians. "The team names of the Braves and the Indians are stereotypes about scary Indians," replied Rock Deer. "How is Syphilitic White Missionaries any different?"

Rock Deer noted that in the 1970s Stanford University changed its team name from the Indians. Though students voted to rename the team the Robber Barons, the administration insisted on the Cardinals or, later, the Cardinal, a shade of red. "How scary is that? A color? Excuse me?" asked Rock Deer. "They should've gone with Robber Barons."

"But how can Native American students identify with syph -- with such a name?" Johnson asked. Rock Deer replied, "It's not about identification, it's about intimidation."

A group of Red Field cheerleaders and spirit mascots performed a skit depicting the impact of syphilitic white missionaries on peace-loving indigenous peoples. The camera quickly cut away from the skit to focus on newscaster Johnson, who attested, "That is one scary team concept. It left me weak-kneed and shuddering."

"At first we actually picked Forked-Tongued Landrapers, but we weren't sure people would get it," Rock Deer said. "Same with Clueless Wannabe Culture Thieves."

The Hall of Fame says it has been deluged with requests for team name changes, some of which officials suspect may not have been authorized by school administrations. Hall officials say all name changes will be "carefully scrutinized."

In apparent gestures of solidarity with embattled students at Oklahoma's Red Field Indian High School, where students were suspended en masse after attending a football game against rival Pleasant Valley Pioneers wearing T-shirts captioned "Tremble Before the Syphilitic White Missionaries," students across the country have been moving to rename teams after "things that really intimidate," in the words of the valedictorian of one inner-city high school.

"Also, religious oppression is scary, which is why we at St. Euphemia renamed our team the Braindead Zombie Protestant Fundamentalist Backlash. We mostly play other Catholic schools and we're pretty confident that will have them shaking in their soggy diapers, the big old babies."

Buckles added that many of her best friends are Protestants. "Try to understand, this is about football. This is about winning."

"We're going to be checking these name change requests for months," said a weary Hall of Fame staffer who asked not to be named. "I'm pretty sure no administrator approved the Yuppie Creeps, but how about the Entrenched Bureaucracy? It's a Washington-area high school, so that could be real, right? I thought the Tampa Bay Devil Rays was a joke name when I first heard it, so how can I be sure about the Elbow River Fire Ants? I don't think it's even legal to call a team the Disgruntled Postal Workers."

"And look at this," added the employee despairingly. "First we got this request from the Battling Bearcats at Flatland High who have a longstanding rivalry with the Pirate Crew at Hilltop High to change their name to the Declining Test Scores. They crushed the thoroughly terrorized Pirate Crew in the big game, but the Pirates struck back by requesting a name change to the Crumbling Physical Plant Plus Your Principal Smokes Crack."

"Turns out neither name change was authorized, but a temp had already sent out the trophy with Declining Test Scores on it. We engraved a new trophy that said Battling Bearcats, but Hilltop High is naming us in a lawsuit for inflicting loss of school spirit."

"Now, look. Look at this. Here's a new request. What I am I supposed to do, call the principal at Flatland and ask, 'Are you really the Flatland High School Thought Police?'"