Bill couldn't stop thinking about Gary, but he didn't want to have sex with him. Second of three parts. 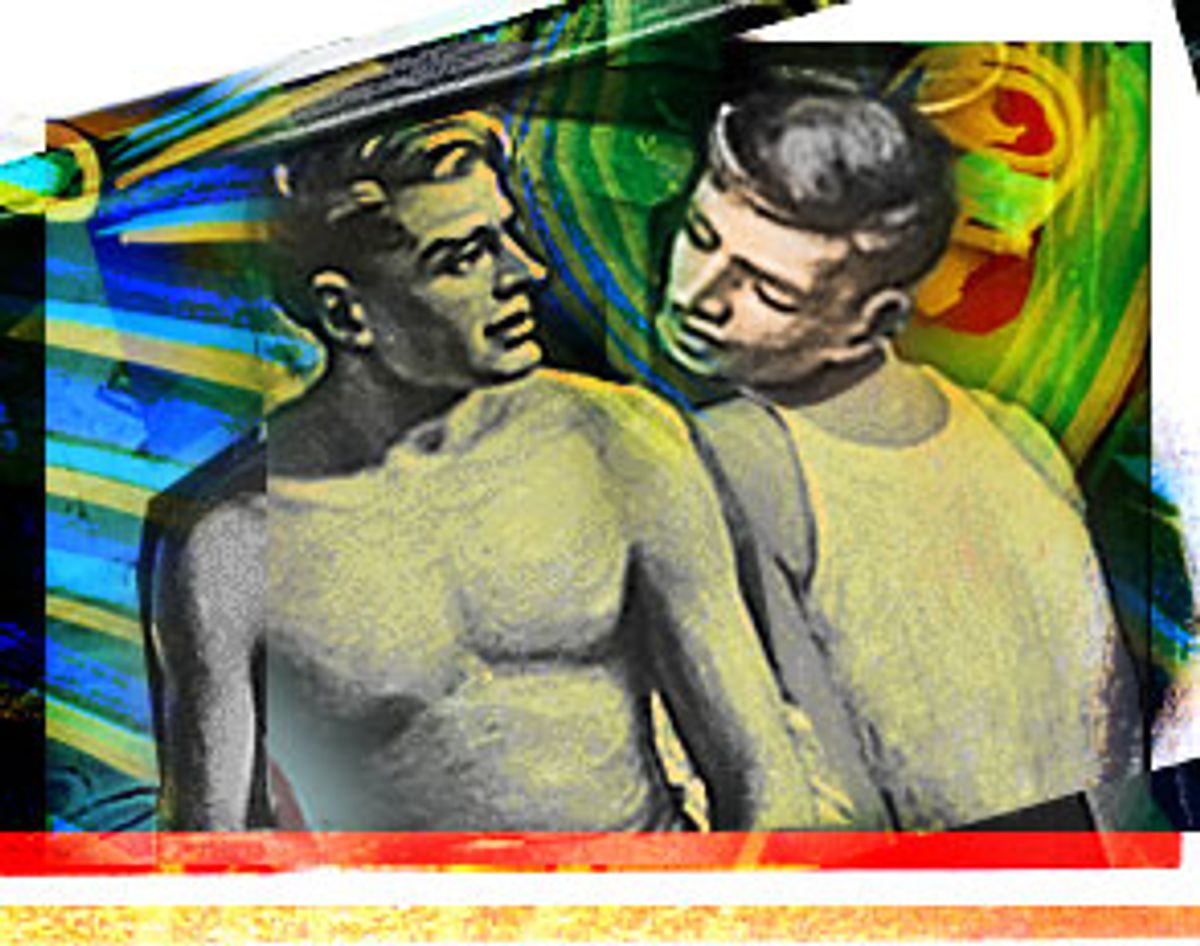 The day after the grilled salmon dinner, Bill drove right through a stop sign, jamming on the brakes when he was already halfway across the intersection. Three days later, he found himself standing on the corner of Market and Spear, blinking furiously in the sunlight, trying to remember where exactly he was heading, and why. One morning, he mailed his PG&E, water and car insurance bills without putting stamps on them. They boomeranged back to him two days later.

He couldn't stop thinking about Gary.

On the surface, nothing had changed. They still spoke almost every day, but now, after Bill hung up, he often had a little trouble breathing. He started to tell Gary all his little secrets, his petty grudges. He told Gary about wanting to run over little old ladies in the crosswalks. He told Gary about wanting to stab people sometimes when he held a knife in his hand. He knew that behind every confession lurked something even worse clamoring for exposure. But he couldn't stop himself.

Bill kept wondering when Gary would decide that something he revealed was beyond the pale. But no matter what he said, Gary nodded sagely. Sometimes he told Bill he'd had the same feeling. Sometimes he said he understood. Sometimes he just smiled sweetly.

"Don't you think it's awful, what I just said?" Bill would ask.

"Yes, you're a horrible person, a total asshole," Gary replied. Then he'd hug Bill and laugh. "But you're an adorable asshole, the way you need to fess up to everything bad you think you've ever thought."

Gary told Bill he would have made a terrific Catholic.

This went on for months. Bill discussed the situation with Barbara. She was now seeing Frank, a plumber she'd met when he came to her house to install a new water heater in the basement of the building where she lived. Frank squeezed her into his schedule between leaky faucets and drains clogged with sewage. Sex agreed with Barbara; her hair frizzed out more than ever, and her skin, as pale as tissue paper, glowed gloriously.

Barbara and Bill went out for sushi one evening after work. Barbara popped a piece of tuna in her mouth. That morning, she told Bill, Frank had sneaked her into the basement of the mansion where he was working. "We did it among the pipes. You could hear the fucking steam banging through them. It was really great." She eyed him shyly. "I think this one is love."

Bill sipped his miso soup. "That's what you said about Alex."

"I know, I know." She shifted in her chair. "So maybe it's just sex. I can never tell the difference. They make me feel good, so I love them. Is that wrong?"

"Not if you don't pretend it's permanent."

Barbara waved her hand vaguely. "See, that's where you guys are lucky. Sex can just be its own thing."

"Well, I keep fucking all these different guys but -- "

"God, that would be so incredibly refreshing," said Barbara. "You know, 'Give it to me, buster, then go home and don't bother calling me again.'" She laughed and plucked some lint off her blouse. "Hey, how's Religious Ass Man?" she asked.

"Like, why can't it be like that with Gary? You know, full moon, time to fuck, see you later."

"What's the big deal? It's a different gig with you guys. Just tell him you're in love with him." She leaned across the table and pointed at him with her chopsticks. "You are, aren't you?"

"I don't know. I guess." Bill speared a clump of sticky rice. "But what would be the point of telling him?"

"Well, what's the point of not telling him?"

"I mean, it's just weird. We've been friends for more than a year. Now what's this about? I don't even understand what's going on. I don't even think I want to sleep with him. What can I tell him?"

Barbara downed her tiny cup of sake and motioned to the waiter for more. "You think Gary knows what he wants? Look at all the screwed-up guys he's gone out with after Joe. Like that creep last year with the truckful of old file cabinets. And the next guy, the one obsessed with frozen peas."

Bill moaned. "All right, so he's a mess, too. But why does everything have to be so complicated?"

Barbara snapped her fingers in his face. "Stop whining. It's not complicated. It all depends on how you look at it. You think maybe you love someone you've never fucked? Big deal. You keep it to yourself, you suffer alone. You tell him, at least the two of you can suffer together. Which do you prefer?"

Bill told Gary he loved him on the day Gary found out from his doctor that his T-cell count had dropped below 200. It was now official: He had AIDS.

"I love you, too, Bill." Gary took off his sunglasses and rubbed his eyes, which drooped more than usual.

They were sitting on the beige couch in Bill's living room. Bill sat with his legs tucked under him. He noticed how thick Gary's fingers were, and how the tiny hairs on his knuckles glistened in the light like filaments. Bill wanted to stroke Gary's hands, or squeeze them. "No, you don't understand," he said. "I love you."

"Don't worry, don't worry. It's not like I exactly want to tear off your clothes. It's not about that. It's just about ..." He stopped. He didn't know what it was about.

"You mean you want to go out and mess around somewhere and then come back and cuddle?"

Bill hadn't thought of it that way. But when Gary said it, he knew that was just what he wanted.

Gary looked at his fingernails and didn't say anything. Somewhere in the distance, "Puff, the Magic Dragon" was playing on the radio.

"I'm sorry," said Bill. He folded his hands in his lap and tried to remember what he had thought he would say to Gary when he had thought about what he would say. He remembered nothing. "I don't understand it myself. I didn't want to tell you, but ... but somehow I couldn't not tell you. You know?"

Gary fingered the silver hoop in his ear. "Your timing's phenomenal," he finally said. He twisted his body away from Bill. "Don't you think it's a little fucked up, telling me this now? Today? I mean, hello! I've got AIDS. I'm gonna die probably."

"Oh, and if I'm not gonna die, you don't need to be with me. Is that it?" Hard understanding spread across Gary's face. "This is about your survivor's thing, isn't it?"

Bill shifted uncomfortably. "I don't know why I said that about survivor's guilt. It's horrible."

Gary stood up. "Yeah, well." He spoke softly. "Fuck you, Bill." He slammed the door on his way out.

Bill sat still for several minutes. Then he poured himself a glass of Pepsi. The bubbles prickled down his throat and calmed him a little. He didn't know if he should call Gary or drive over to see him or what.

He took three carrots out of the refrigerator and grated them. Then he chopped up an onion. He had no idea what he was planning to make. He was reaching for another onion and a potato when the phone rang.

"Listen, you asshole, does this mean I have to have a really horrible death? You know, to give you the richest survivor's experience?"

Bill's shoulders sagged with relief. "No, I think a normal death would be fine."

Gary sighed. "I guess we could sort of cuddle, or whatever. We could say we're 'loving friends,' maybe. Something like that." He paused. "But look, I don't want to have sex. Let's just get that clear from the start. I don't have the energy for that. I'm taking enough Xanax as it is."

"Loving friends." Bill liked the way that sounded. For the next couple of hours, he felt aglow, like someone had stuffed Christmas lights under his skin. He drew himself a hot bubble bath. Soaking in the water, surrounded by mountains of suds and foam, felt to him like being in Gary's presence, and his body sank into the tub like a sigh.

But later that night, doubts flooded back in. Maybe Gary was right, he thought. Maybe this was just his desire to experience survivor's guilt playing a cruel trick on him, on both of them. Maybe it was the prospect of a shortcut to AIDS widowhood, not Gary alive, that glittered brightest.

But Bill didn't say anything. The occasion never seemed right. Gary appeared happy with their arrangement, and over the next few months Bill also grew accustomed to it. They rented bad thrillers and watched them holding hands on Gary's bed, laughing. They spent the night together at Gary's place a couple of times a week and snuggled up together, one resting his hand on the other's chest. Bill didn't give up outside sexual adventures, but they observed a tacit agreement not to discuss them.

Gradually they shifted from solitary "I's" into some odd version of "we." Sometimes Bill thought of their coupling as thoroughly mature. From the outside, he knew, their relationship looked like a rare and touching case -- love as the fruition of a tender friendship. He told himself that they had simply started at the familial and nonsexual stage many gay couples reached after a few years.

But often he wasn't so sure. If they never had sex, could they really be a couple? Was their public show of togetherness just another fraud, an attempt to cover up his own pathetic craving for loss and experience?

Bill tried to ignore his doubts. He told himself it didn't matter what anyone else thought. He told himself he could love Gary but crave tragedy at the same time. But he corkscrewed up his mind thinking about it all, and in bleaker moments he secretly blamed Gary.

Gary's health declined. He battled infections; each left him more vulnerable than the one before. He couldn't tolerate the side effects of some drugs and experienced allergic reactions to others. Bill nursed him through it all, dealing with doctors, insurers, pharmacies, service providers, friends, family. Gary relied more and more on Bill's help, and Bill knew Gary loved him for it.

But the worse Gary got, the greater was Bill's discomfort. He liked taking care of Gary and making him feel comfortable, but then felt guilty for liking it. He found it fascinating to watch Gary's body battle itself, like the fascination he felt seeing car wrecks or slasher movies, and he hated himself for that, too.

Each new infection, each new crisis, horrified him. And intrigued him. Emotion seeped out at odd times and places. He found himself sniffling in the periodontist's office, just before gum surgery. Often he experienced a bloated sensation, a percolating excess of feeling that needed discharge. He couldn't tell exactly what the feeling was -- love, or maybe despair, but sometimes it shimmered too much like joy.

He told himself that he should be deeply unhappy, and he was. But he knew this was also the happiest time.