"Along Came a Spider" 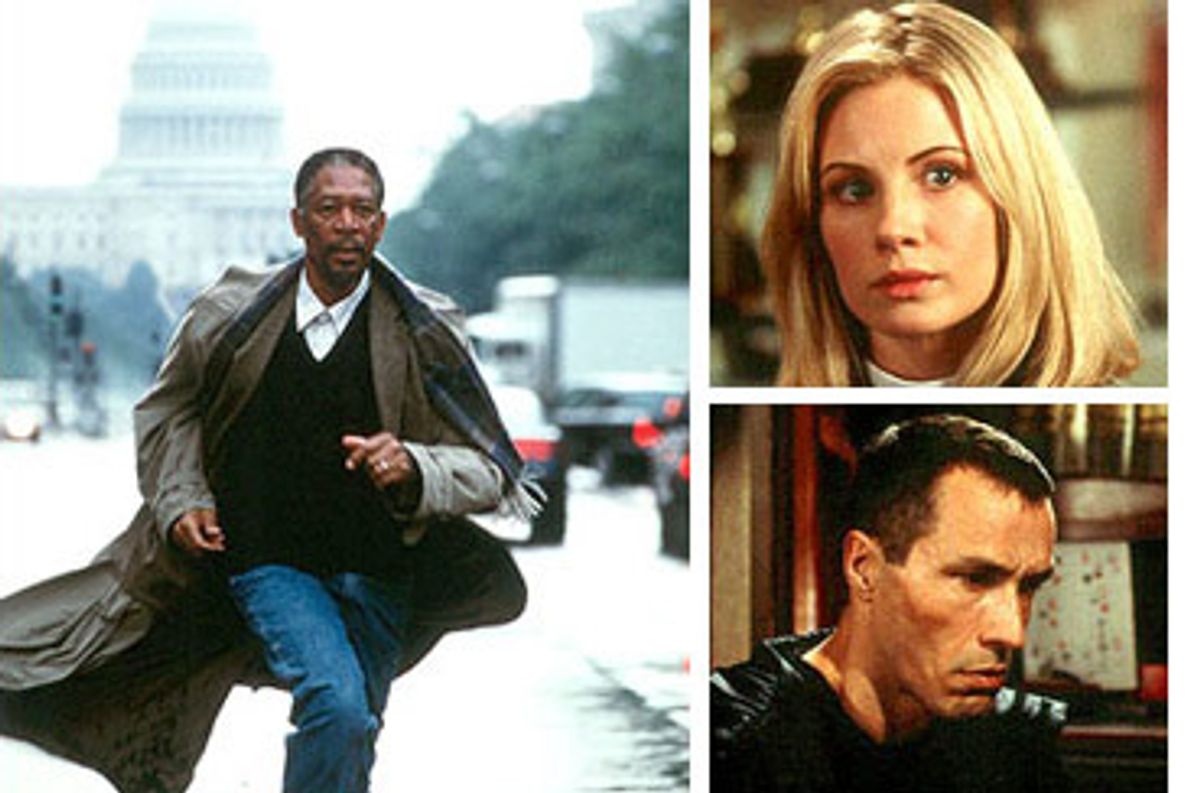 No one should have to look at the wallpaper featured in "Along Came a Spider." Morgan Freeman's apartment is done in clashing "homey" patterns that look as if they might have been lifted off old "All in the Family" sets. And Monica Potter's place is a cascade of country pastels that's a Pottery Barn-inspired nightmare.

I'll say this for the wallpaper, though: It distracts you from the movie.

"Along Came a Spider" is the second film in which Freeman plays James Patterson's detective hero Alex Cross (the first was "Kiss the Girls"), a Washington cop whose specialty is profiling psychotics. Potter plays a Secret Service agent named Jezzie Flannigan (what is she -- an Irish hip-hopper?), whose job is on the line when the senator's daughter she's assigned to guard is snatched from her private school. Cross has been on leave dealing with the proverbial psychological baggage since a sting he set up resulted in his partner's death. The kidnapper (Michael Wincott), who has dreams of criminal glory and wants to pit himself against the best, lures Cross back to work.

Considering the movie deals with the kidnapping of a child and the genre is that new hybrid that can scarcely conceal its fascination with psychotics, "Along Came a Spider" isn't nearly as unpleasant as it might be. I do have some reservations about a scene in which the terrified girl witnesses the murder of someone who's trying to help her. It's the one place the movie made me feel something bordering on the sordid. The girl, played by Mika Boorem, hasn't been made distinctive, so we've got no particular emotional investment in her. But she is still a terrified child. And director Lee Tamahori doesn't handle the violence with any particular wit or brutal poetry or force or surprise, so the scene feels prosaic, ordinary, and the jump cut arrives on predictable schedule.

It surely is ludicrous, though. James Patterson is a contemporary mystery novelist I haven't gotten around to reading. Are his plots all this twisty-turny silly or has the screenwriter, Marc Moss, mucked around with it? Freeman and the chief government agent (Dylan Baker, wasted in a stolid role) keep talking about what a cunning adversary the kidnapper is. But he sure doesn't seem cunning when it turns out that the kidnapping is just one step toward his ultimate goal. (If he's so smart, surely he could have figured a way to cut to the chase.) And Moss' dialogue is the most riotously expository I've heard at any movie in years. You know that Hollywood really doesn't expect the audience to know a damn thing when it feels the need to explain the connection between Charles Lindbergh and kidnapping.

Several good actors go down with this torpid ship. In addition to Dylan Baker, there are Michael Moriarty and Penelope Ann Miller as the parents of the kidnapped girl. Can someone tell me how Miller has come to be stuck with the hand-wringing, worried-mother routine? This is the same actress who, just a few years back, was giving sexy, beguiling performances in pictures like "The Freshman" and "Carlito's Way." Still, her tenseness here is the most believable thing in the movie.

How's Morgan Freeman? Dependable and dull, the way he's come to be valued, without a trace of the fire and surprise that make him a great actor. But then he's meant to be dull and dependable here. Cross is one of those characters who's half-Sherlock Holmes, half the Amazing Kreskin. He can profile people seemingly by looking at them. When Monica Potter asks Freeman what he sees in her, you want him to answer, "A very good agent." How else did she wind up starring opposite him?

I'm tempted to call Monica Potter the worst actress to disgrace the screen since Ali McGraw. Would that she had the personality to live up to the tip of her upturned nose. But a few minutes listening to that flat, nasal voice and watching her easily claim the Guinness Book record for not blinking from Steve Forbes and the very concept of personality slides from your mind. She's a grating blank. Potter simply doesn't have any authority on-screen. There's no telling how this woman ever got a job guarding anything. No wonder Cross declines to profile her. Anyone who manages to detect something to profile in Monica Potter might find raising Lazarus a snap.