A cocksure Johnny Depp swaggers through a sleazy, glamorous head trip about the '70s and '80s drug trade. 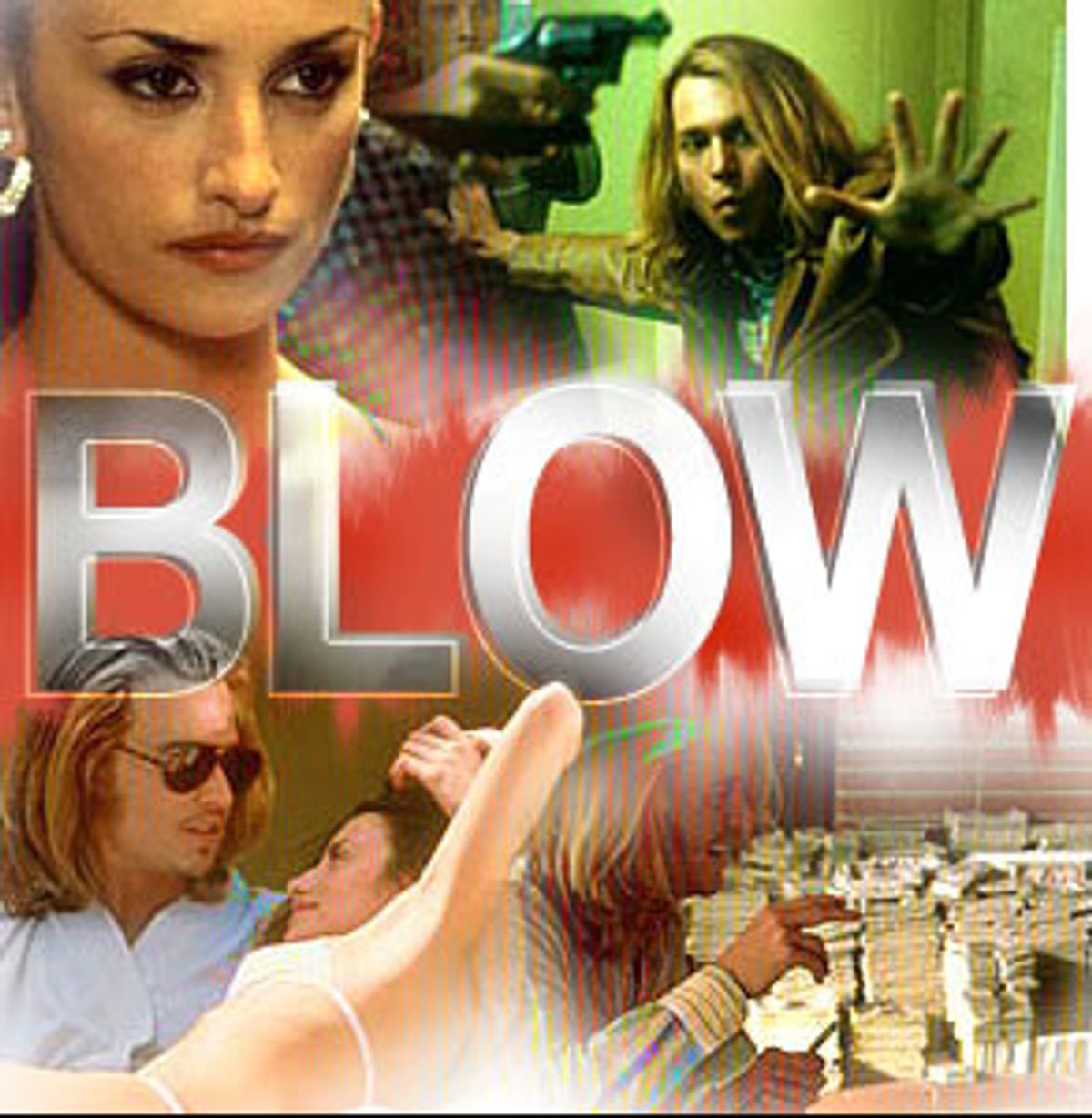 The key to Ted Demme's wilfully amoral, zigzaggingly pointless and pleasingly entertaining drug fable, "Blow," is in Johnny Depp's walk. The movie takes us from the late '60s to the present, and through it all Depp's carriage -- a loose-jointed cocksure swagger -- is the same whether he's looking trim in a silky '70s leather jacket or puffy in a shabby '80s tracksuit. Even with a soft roll of fat circling his middle (hey, even grooving, high-living drug kingpins gotta eat), Depp walks like hipness has been bred into his very bones, a sense-memory in the marrow handed down from scoundrel princes through the ages.

Depp is the anchor in "Blow." The rest of the movie, dotted by sound performances from Paul Reubens and Penélope Cruz, and a heart-thumpingly dazzling one from Franka Potente ("Run Lola Run"), is like a paisley curlicue swirling around him. Depp aside, the movie is higher on style than it is on substance, but one of its strong suits is that it never stoops so low as to lecture us. It throttles by with irresponsible abandon.

Adapted by David McKenna and Nick Cassavetes from Bruce Porter's book, "Blow" is based on the true story of George Jung, a working-class Massachusetts kid who made a fortune by becoming a major cocaine importer in the '70s and '80s. It's impossible not to compare "Blow" with that other, ostensibly classier recent drug movie, "Traffic," but "Blow" is a different creature altogether -- a messier, sleazier, more glamorous one. It's more cavalier than "Traffic," but also more pleasurable. "Traffic" is well made, and it doesn't preach. But it's extremely self-conscious about making its big statements, and consequently it has a labored feeling that's absent from Steven Soderbergh's other fine pictures ("Out of Sight," say, or "The Limey").

Unlike "Traffic," "Blow" doesn't work as a procedural -- in other words, it doesn't clearly explain the mechanics of how George got the damn stuff into the country. Nor does it address the effects cocaine can have on people's lives (its potential to ruin them, for example). The movie plays it safe by making it look as if all George's customers are rich Hollywood assholes, and who cares about them? That shirking of responsibility on Demme's part is going to be very disturbing to those who feel that the message "Drugs Are Bad" has been underrepresented in our culture, but most of the rest of the responsible adult population should be able to handle it.

Demme has structured "Blow" as a rags-to-riches-to-rags story, and it almost has a hoary, old-Hollywood feel. The movie wastes no time explaining how George (Depp) became a drug runner, but it also unashamedly justifies George's career choice: Depp's father (played by an extraordinarily sympathetic Ray Liotta) is the kind of guy who can never make enough money to satisfy his demanding, materialistic wife (the overly shrill Rachel Griffiths, who strikes the movie's single biggest sour note). In fact, during particularly bad stretches, he makes barely enough to keep the family afloat. In a latter-day riff on Scarlett O'Hara's "I'll never go hungry again" speech, George vows never to be caught in the same position his dad was. The key is that Depp doesn't deliver it as a corn-pone observation, and for that reason his matter-of-factness about making money seems perfectly in line with the bulging cornucopia of late-model sports cars and Florida mansions that's to come later.

So young George heads out to California, where he hooks up with Barbara (Potente), a gorgeous stewardess (that's what they were called in those days), and quickly realizes that he can make a bundle selling marijuana to kids on the beach. His schemes become more and more elaborate, and with the help of compatriots Tuna (Ethan Suplee), Kevin (Max Perlich) and Barbara's hairdresser, Derek (Reubens, charming as well as vaguely seedy and untrustworthy), George expands his business, not to mention his potential risk.

The most glorious moments of "Blow" are packed into the first quarter, which covers the last days of the '60s. George and his pals are living high on their enormously profitable marijuana business, "borrowing" small planes to fly their product in and frolicking together poolside, fast friends united by fast dough. Potente, with her sandy blond bangs and sooty mascaraed eyes, looks like the quintessential blasé '60s babe, but she both radiates and reflects golden warmth: The picture cools noticeably when she disappears from it. Later, Depp hooks up with glamorous Colombian firebrand Mirtha, played by Cruz, who's best when she's allowed to run free as a sullen, sulky beauty who snorts coke while pregnant ("I quit smoking!" she fires back at George, hilariously, when he reproaches her) and cavalierly mispronounces words (she brands George as a hype-ocrite).

No character other than George is developed particularly well in "Blow," and the story takes angular, wayward turns in its last two-thirds. The movie isn't particularly well structured, and its scenes feel stringier and more disconnected as the picture rolls on. Demme is happy to do little more than riff on the excess and glamour of the '70s and '80s. As he builds his empire, George attempts greater feats of derring-do, barely worrying that he might get caught and sent to prison -- he's clearly having too much fun, high not so much on his status as he is on taking risks, fox-trotting with Colombian scumbag drug lords and importing ever-increasing mounds of product.

But even in a movie as morally lax as "Blow," actions do have their consequences. The one thing George fears losing is the love of his daughter, Kristina (played by two actresses, Emma Roberts and the lissome, fragile-looking James King), and sure enough, that's the one brand of heartache he can't escape. Depp plays the scenes with his young daughter so tenderly that you never doubt he thinks the world of her; still, he manages to betray her -- not intentionally, although it's obvious that years of careless behavior on his part only lead to his undoing.

In the movie's terms, Kristina isn't so much a character as a convenience, a symbol of the only thing George desperately doesn't want to lose; the cars, the houses, the gorgeous wife can all fall by the wayside. George's behavior is bad enough that you would completely expect Kristina to turn her back on her him. He's an A-1 loser dad who does little more than pay lip service to being principled, now and then going "straight" only to be lured back to his former life by circumstances supposedly out of his control.

But the way Depp plays him, it doesn't matter that the setup is a contrivance. He reassures the young Kristina that he'd never leave her, saying "I couldn't live without my heart," and somehow his velvet-brown eyes look sad in advance: He's playing a man who just knows he's going to mess it up.

Although "Blow" is a movie that's basically designed to be consumed and flung away, Depp delivers something that sticks. He makes it perfectly believable that the fellow with the cocksure walk, a walk that doesn't change from the '60s to the '90s even when his body no longer suits it, is really a family guy at his core. As a man who's indirectly (or directly, depending on your stance) responsible for any number of overdoses, deaths and lives run down the tubes, does George deserve the love of a family at all? Maybe not. But his punishment, symbolic as it is, is still almost more than we can bear to see Depp carry. In the end, George doesn't get away with murder. His swagger, his smirky smile, his effortless confidence all suggest that he's a hero to himself, a man who has walked away with every shred of macho dignity intact. And yet it's all a ruse. As Depp plays George, the unspoken shame of what he has done is just a blink away, deep inside his eyes.