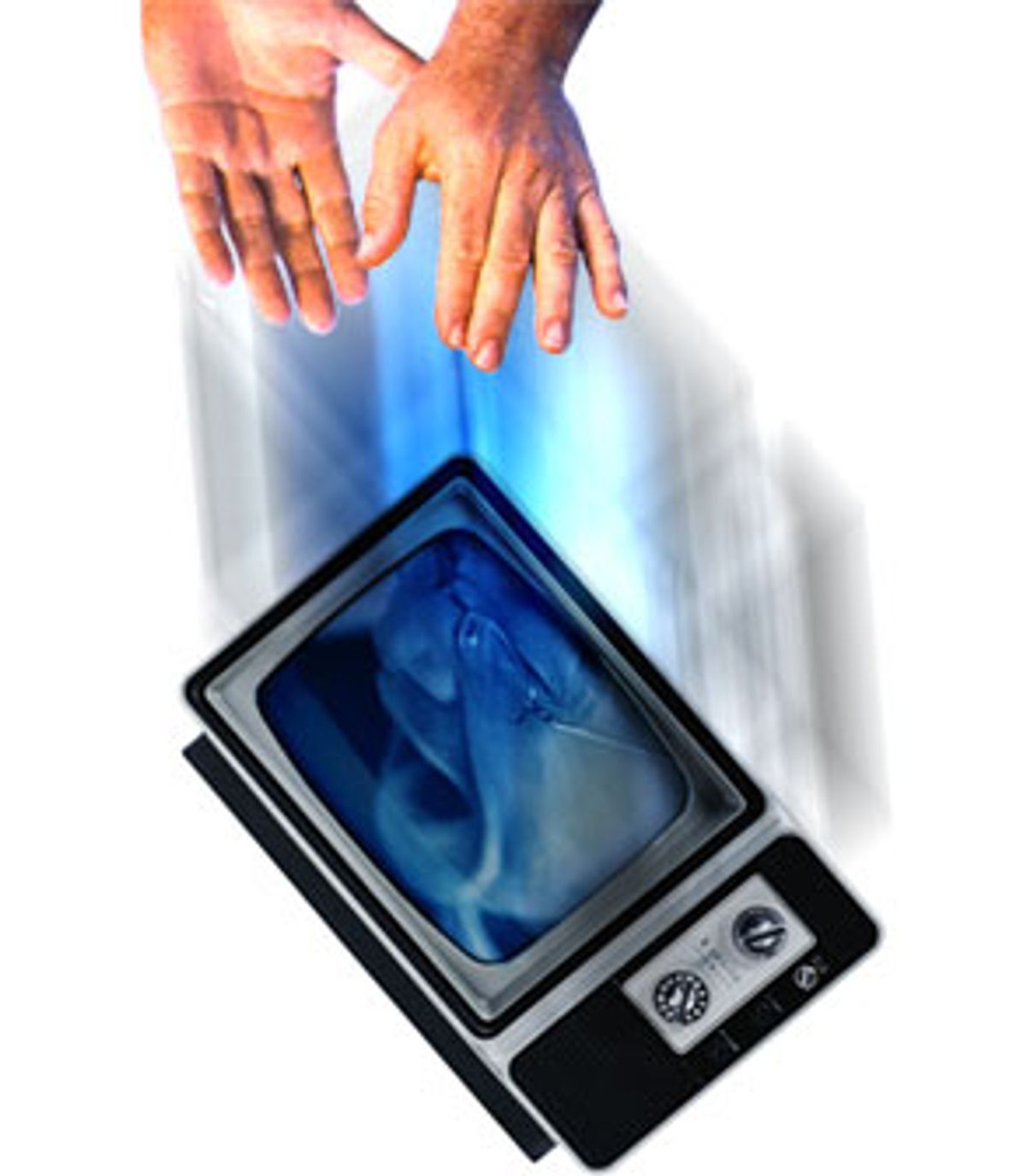 My mother called it the idiot box, and when I was growing up in the 1970s, intellectuals were still claiming they didn't watch television. Now "The Simpsons" and "The Sopranos" are hailed as masterpieces, and while moralists still get worked up over specific programs ("Jackass" comes to mind), almost everyone agrees that television can be just as good as theater or film. As a TV critic, I've been hammering that point for the past eight years.

But now that it's respectable, television seems less pleasurable. When I hear the resistance-is-futile theme to "The West Wing," I wonder if it might be more fun to clean my bathroom, and goofball shows like "The Iron Chef" merely heighten my embarrassment at being home alone on a Friday night. Television, I have discovered, is a lot like being gay: It's fun only if people are outraged about it.

Oh, I don't mind watching a good "I Love Lucy" for the 20th time, or an episode of "Homicide: Life on the Street" that I missed during its original run. But I hate looking for something new, and that's not good for a television critic. Nonfiction series leave me cold, and I'm referring to "Frontline" as much as "Temptation Island." (I caught a few minutes of the PBS documentary "Jazz," but it felt like a better use of my time to put on a CD and read the liner notes.)

As for scripted entertainment, TV always seems to be dominated by weak imitations of innovative series that peaked several years ago. For much of the '90s, we got sitcoms that ripped off "Seinfeld" (including modest hits like "Ellen" and bombs like "The Single Guy"); now we've got courtroom dramas that aren't as good as early episodes of "Law & Order" (such as "The Practice" and "Family Law").

My flagging interest in the idiot box ("boob tube" was never uttered by my easily embarrassed mother) may have something to do with the fact that I just turned 37, putting me at the midpoint of life expectancy. Suddenly it hurts to waste three minutes sitting through a commercial break, trying not to glance at all the unread books I've carted around from apartment to apartment. Even worse is breaking my life into half-hour chunks in order to accommodate a TV schedule. I might cut off a perfectly enjoyable phone conversation just to catch the beginning of "Frasier." If I've got 10 minutes before "Survivor," I might kill the time by flipping channels -- since I'm usually too lethargic for any activity that would require me to pull down the window shades.

Television's emphasis on youth is also getting harder to take, now that mine is gone. I can no longer emulate the behavior on shows like "Ally McBeal" and "Friends" without feeling like -- well, an idiot. Aching for stability in my own life, I'm getting tired of watching disastrous dates and aborted weddings on never-ending TV series. I don't need to watch anyone else die prematurely on "NYPD Blue."

I still believe that television can be as intriguing as film, music or theater, but it can't replace any of them. And the more I watch TV, the more I miss those other forms of artistic expression.

After I've seen a good movie, I become a camera. I may have walked down the street outside the movie theater 100 times before, but everything on it will seem new. An ad for Coca-Cola, painted onto a brick building sometime around World War II, will seem as if it had been slapped on a few hours ago and blasted with a heat gun to simulate weather damage -- a subtle but significant bit of set design. The size and shape of each rain puddle seem deliberate, and a plastic bag blowing in the wind becomes a homage to "American Beauty."

Then there are the "extras" walking along the sidewalk, some of them implausibly beautiful and others worthy of an Oscar for special effects. I must have inadvertently flirted with all kinds of people on these post-cinema walks, and some of them may have tried to flirt back, but I would have been too busy picking out my next close-up to notice.

Music, of course, makes me more aware of sounds. I usually play a CD when doing any kitchen chores, and afterward I can enjoy -- rather than curse -- the syncopated drip from a leaky faucet in my stainless-steel sink. On top of my refrigerator is a ceramic bowl nestled inside a slightly larger glass bowl, and I'll notice their bashful vibrato whenever a passing truck causes my building to shudder. Or, if I've just heard a particularly clever song, I may try to think of additional lyrics. (Cole Porter's "Let's Fall in Love" can last for days: "Rats do it/Voles do it/Bob insists on telling us the Doles do it," or "Moss do it/Peat do it/I can watch the couple 'cross the street do it.") Just about any piece of music also leaves me fantasizing about being a DJ in a country with only one radio station: What can I play next, to achieve either a smooth segue or a disturbing shift in tone?

As for theater, just think of the term "drama queen." After the curtain falls, I imagine myself confronting anyone who has ever caused me a minute of pain, or spilling out my guts to a stranger on a subway platform. I rewrite embarrassing incidents from my youth, making myself a hero or a tragic figure. I am inspired to declare my love to a person who has shown no interest in me, and I take pleasure in writing his lines too.

So how does television make me feel? Glib more than anything. The television industry loves dead bodies, but it can't stand dead air. Silence is a bigger taboo than incest. That's why some of the most highly regarded TV series feature dialogue that's as fast as it is clever ("The West Wing," "The Larry Sanders Show"). Lesser programs are afraid to get too far ahead of their viewers, so they fill their gaps with laugh tracks and music cues (strings for drama, percussion for danger).

Panelists on the most intelligent news programs know enough not to pause for breath, and you frequently see some poor pundit embarrassed by his own words but unable to stop long enough to put them in a logical sequence. If you doubt the pervasiveness of noise on television, watch what happens when a few seconds of silence slip through. People immediately reach for the remote control and fiddle with the volume, as if reassuring themselves that the TV still works, even when the silence is obviously intentional.

After I watch television, I feel like David Letterman. I imagine that I can say things off the top of my head for as long as the cameras are rolling. Life becomes a continuous game of one-upmanship, and I'm ready to deflect any argument and deflate any attempt at passion. Whatever happens, I've got a zinger for it.

Not that there's anything wrong with glibness. I like scabrous humor as much as anyone does, and TV is far ahead of other media in making fun of the powerful and pretentious. It takes a few mild shots at politicians and church leaders, but it excels at tearing down the most revered members of American society: movie stars and musicians. After flipping through celebrity-obsessed magazines, I crave the sarcasm of Jon Stewart on "The Daily Show" and the mean-spirited quips on "Will & Grace." (Such humor is rare in the film industry, which lacks modern equivalents to the Marx Brothers and W.C. Fields. Today, even "gross-out" comedians such as Jim Carrey and Adam Sandler insist on playing sympathetic characters with Chaplin-like pathos.)

Still, all this irreverence can become exhausting. For me, music has the same properties as wine, relaxing my brain and allowing me to focus on the moment. But television, like caffeine, has the opposite effect, driving me crazy when anyone -- whether on the screen or in my living room -- takes too long to get to the point. David Byrne's psycho killer ("I'm tense and nervous and I can't relax") could be me after an evening of NBC sitcoms, pacing in my living room and waiting for someone from "Friends" to barge into my apartment without knocking. Soon another Talking Heads tune burrows into my head, and I ask myself, "How did I get here" without an establishment shot of my building?

Leaving aside awards shows, television is ruled by the clock, and our awareness of exactly when a program will end colors our perception of what we see. We know, for example, that if a murder suspect is fingered 10 minutes into "Law & Order," the charge isn't going to stick, and we dutifully wait for the episode's inevitable plot twist. But we don't want a genuine surprise, such as an ambiguous ending that requires us to interpret what we saw, because we need to clear our heads for the next program.

Television's repetitive nature helps to explain why its best-known characters are comic (Ralph Kramden on "The Honeymooners") and the best-remembered moments in theater are tragic (Willy Loman in "Death of a Salesman"). If Ralph Kramden lost his life savings on just one harebrained scheme, we might pity him, but because he does it dozens of times, we're allowed to laugh at him.

A popular definition of insanity involves repeating an action over and over again, never realizing that the result will be the same. That describes pretty much every memorable TV character. Even ostensibly dramatic TV series have a darkly comic tone, typified by the wisecracks made when the principals of "Law & Order" and "The X-Files" find yet another mutilated corpse. I hate to think what my reaction would be if I turned off "CSI: Crime Scene Investigation" and looked out my window to see someone being stabbed on the street. Could I call 911 without trying my Jerry Orbach impression?

A handful of TV series, such as "Homicide," have gone beyond glibness. "The Sopranos," which can be as funny as "The Honeymooners," nevertheless makes it clear that the actions of its characters have permanent consequences. At least in the show's first two seasons, we were able to chuckle at mob boss Tony Soprano's frustrations in dealing with both his families (at home and on the job) without having to forgive or overlook his basic loathsomeness.

Probably the most consistently disturbing TV series of all time is the science-fiction anthology "The Twilight Zone," in which characters got only one crack at a twist of fate, usually to their everlasting regret. The fact that we haven't seen a program like that in more than 35 years -- my entire lifetime! -- says a lot about television.

So I'm going to cut back. I've discovered a lot of great programs during my tenure as a TV critic, but I'm going to respect the law of diminishing returns and look elsewhere for things to write about. (And not "St. Elsewhere," as much as I love that show.) Like most Americans, I'll probably stay in touch with a few favorite shows -- "Letterman," "Everybody Loves Raymond," maybe "Once and Again." But I won't keep watching shows like "The Practice" for years after they dissolve into parodies of themselves, and I'll take a pass on sitcoms that can't even come up with a decent joke for a 10-second promotional spot. If I stay away from television long enough, I might even get back the attention span I had as a college student.

It's not really an idiot box, Mom, but only an idiot would devote his life to it.

Robert David Sullivan has covered television for the Boston Phoenix since 1993.