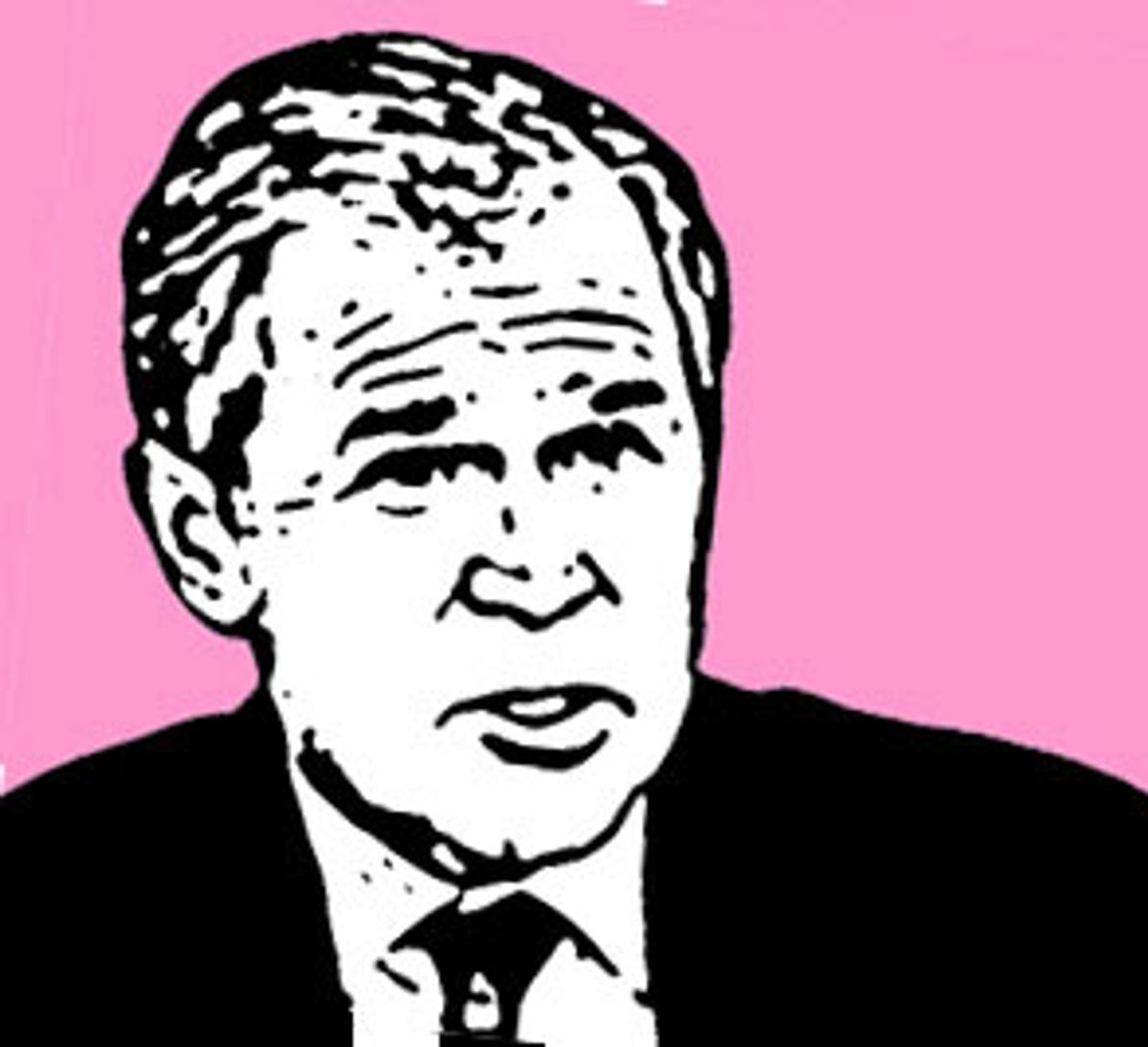 During the South Carolina Republican primary last year, Gov. George W. Bush told listeners of a Christian radio show that "an openly known homosexual is somebody who probably wouldn't share my philosophy," and therefore probably wouldn't serve in his administration. On Monday morning, however, President Bush formally announced that "an openly known homosexual," Scott Evertz, would serve as director of the Office of National AIDS Policy.

The appointment was met with muted delight by gay and lesbian rights organizations, and earnest disappointment in conservative circles, with no one on either side quite sure what it meant in the long term. It's the latest confusing twist to President Bush's awkward dance with gay and lesbian groups.

"We're not that happy about it," admitted Heather Cirmo, spokeswoman for the conservative Family Research Council. "Not even Clinton appointed an openly homosexual person in this position."

Cirmo said that gay rights would probably be the issue over which Bush and Christian conservatives would butt heads most during the next four years.

"We've had signs from the beginning that the Bush administration was not going to help us that much in our efforts to stem the tide of homosexual activism," said Cirmo.

David Smith, spokesman for the pro-gay-rights Human Rights Campaign, heralded the appointment as "a positive sign," but did question the timing of the announcement -- on the same day that President Bush announced his proposed budget, which offers no new funding for AIDS prevention programs. The funding Bush has proposed for Ryan White HIV/AIDS care and prevention programs remains at $1.8 billion. "That's not keeping up with the impact of the disease," Smith says. "And there's only a 2 percent increase in prevention money."

The Family Research Council's Cirmo wasn't concerned about the timing -- she just seemed aghast that Bush would appoint someone who's "not just ... a gay person, but a gay activist."

"What particularly disturbs us is the quote in the paper today that Scott Evertz wants to remove the stigma attached to homosexuality and AIDS," she said. "We wonder what that means. It's certainly not in line with President Bush's agenda promoting abstinence until marriage as the healthiest lifestyle choice."

Smith downplayed the significance of the fact that Evertz is "openly gay." "There were 152 'out' gays and lesbians serving at the end of the Clinton administration," he said. He also noted that the move was not entirely unprecedented since, in 1987, President Reagan appointed an openly gay man to a nonpaid position on an AIDS advisory panel -- Dr. Frank Lilly, chairman of the genetics department at Albert Einstein College and an ex-board member of the Gay Men's Health Crisis organization -- also setting off a firestorm on the right.

Smith was full of praise for what Evertz brings to the table. "He has a backbone," Smith said. "He's strong on leadership. And clearly, he's close to [Health and Human Services] Secretary Tommy Thompson." Bush has delegated the AIDS issue to Thompson and Secretary of State Colin Powell, Smith said, which reassured AIDS activists since Thompson was considered to be active on AIDS issues as governor of Wisconsin, and Powell is considered a moderate on social issues. Powell, according to one lobbyist devoted to conservative social issues, actually is far more liberal than Evertz himself.

Evertz might actually be that extremely rare breed -- a gay public official who does, it seems, share almost all of Bush's philosophy.

"Scott was very active in Wisconsin Citizens Concerned for Life," the lobbyist said. "Among homosexuals, it would be hard to find someone who is closer to a conservative perspective than Scott Evertz." With the exception of gay rights -- which he has even editorialized about for a Wisconsin gay publication -- Evertz, vice president of the Luther Manor Foundation and an administrator for the United Lutheran Program for the Aging, is right there with Bush on every issue, the lobbyist says.

And he gave him crucial support when Republican gay groups began applying heat to Bush last year. A year ago, the national Log Cabin Republicans threatened to revoke the Wisconsin Log Cabin chapter's charter after Evertz put out a press release slamming the national group's radio ads against what they perceived to be gay baiting by Bush, saying that the ads were "tantamount to an endorsement of Senator [John] McCain." McCain, meanwhile, had received contributions from members of the national Log Cabin's board.

After the primaries had concluded and Bush had sewn up the Christian Right vote, however, Bush then agreed to meet with some gay Republicans. Evertz was one of a dozen local Log Cabin officials -- no one from the national office was invited -- shuttled to Austin to confab with then-Gov. Bush in a meeting that the GOP nominee said made him "a better person."

The White House has yet to announce a position on the matter.

One of Cirmo's former colleagues from the Family Research Council, Kay Cole James, has been nominated to serve as director of the Office of Personnel Management, charged with enforcing these executive orders. But when asked on Friday if that was any indication of Bush's position on the executive orders banning government employment discrimination against gays and lesbians, White House spokesman Ari Fleischer said, "I would not make any link between an appointment to somebody and a decision that the president would make on an executive order here, as far as White House personnel."

Another relevant issue that could end up on President Bush's desk involves the proposed national law against such workplace discrimination, called the Employment Non Discrimination Act, or ENDA, which is scheduled to be introduced in the U.S. Senate next month by Sens. Jim Jeffords, R-Vt., Joseph Lieberman, D-Conn., and Ted Kennedy, D-Mass. ENDA would prevent workplace discrimination against gays in the private sector as well.

When asked his position on ENDA during the second presidential debate, then-Gov. Bush acted as if he had never heard of it.

Both the left and the right, however, are prepared to be disappointed by Bush on this and other issues of the so-called gay agenda, as Cirmo indicated.

She said that members of her organization were concerned with the role that Mary Cheney, a lesbian, played on the campaign of her father, Vice President Dick Cheney. "It raised a red flag, but we didn't raise a stink about it." Likewise, Cirmo said, members of the Family Research Council were alarmed to learn that Mary Matalin -- who has publicly spoken in favor of gay and lesbian rights -- would be taking a leave from her duties as co-host of CNN's "Crossfire" to work as a senior advisor to the administration. "The question is, how is the Bush administration going to act on the homosexual agenda? So far it seems to be going on a different road from the road that we're taking."

Added the conservative lobbyist, "I certainly don't approve of the homosexual agenda, but I know the president has a different view. He's pretty comfortable with these guys as long as they're on board with the rest of his agenda."

But one of "these guys," Smith, begged to differ, claiming that Bush as governor was hostile to gay rights issues, supporting a law banning gays and lesbians from adopting children, and opposing the inclusion of homosexuals in the James Byrd Jr. Hate Crimes Act. "It clearly appeared as though there was gay-baiting going on by Bush during the South Carolina primary," Smith said. "We have a wait-and-see attitude."